The John Cooper Works GP is the most extreme Mini ever

It’s also a bit of a contradiction
by Ollie Kew | Jun 7, 2020
CAR BRANDS IN THIS ARTICLE

This is nothing less than the most powerful, fastest Mini ever made. Welcome to the new John Cooper Works GP, which answers the question, “What would putting more than 302hp and 450Nm in a Mini Cooper be like?”

This is also the third Mini GP, and on the face of it, the GP3 follows the treatment prescribed to 2006’s GP1 and GP2 pretty closely: less weight, more power. Thing is, this time there’s a lot more power, and despite losing its back seats and rear wiper, and wearing the lightest wheels ever fitted to a BMW-era Mini (just 9kg each), it’s not actually that light. 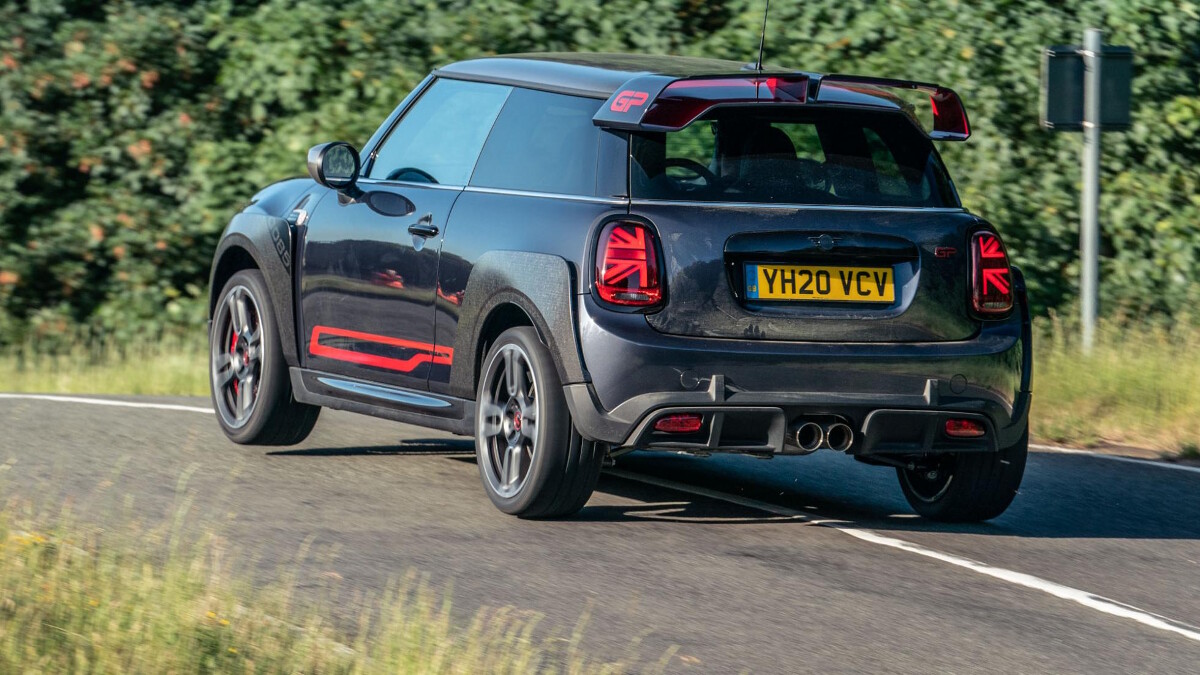 It’s also, for the first time in the model’s history, fitted with an automatic gearbox and paddle shifters. This is a very serious Mini—one that’s here for lap times and outright speed, and that’s come at the expense of some good old-fashioned fun.

Basically, what we have here is the powertrain from the latest BMW M135i shoved into a Mini body, a 2.0-liter turbo four-cylinder sending its 302hp and 450Nm through an eight-speed automatic gearbox. Unlike in the BMW, however, there’s no on-demand four-wheel drive. The monumental power output—more than that of a Mercedes-AMG A35 or an Audi S3—all goes through the front tires, via a limited-slip differential.

The bizarre blade-like wheel-arch extensions are fashioned from leftover carbon fiber from BMW’s ill-fated i3 and i8. So, they’re recycled twice over. They hide a wider track, but provide little in the way of any aero benefit. The enormous rear wing is thick and plasticky, but only carries a tiny little rubber flick to disturb the air flow. Mini is adamant this isn’t a downforce-y car, and makes no claims of the GP weighing more at top speed than it does standing still. Because, we’re told, it’s supposed to feel agile and cheeky, not overly locked-down. 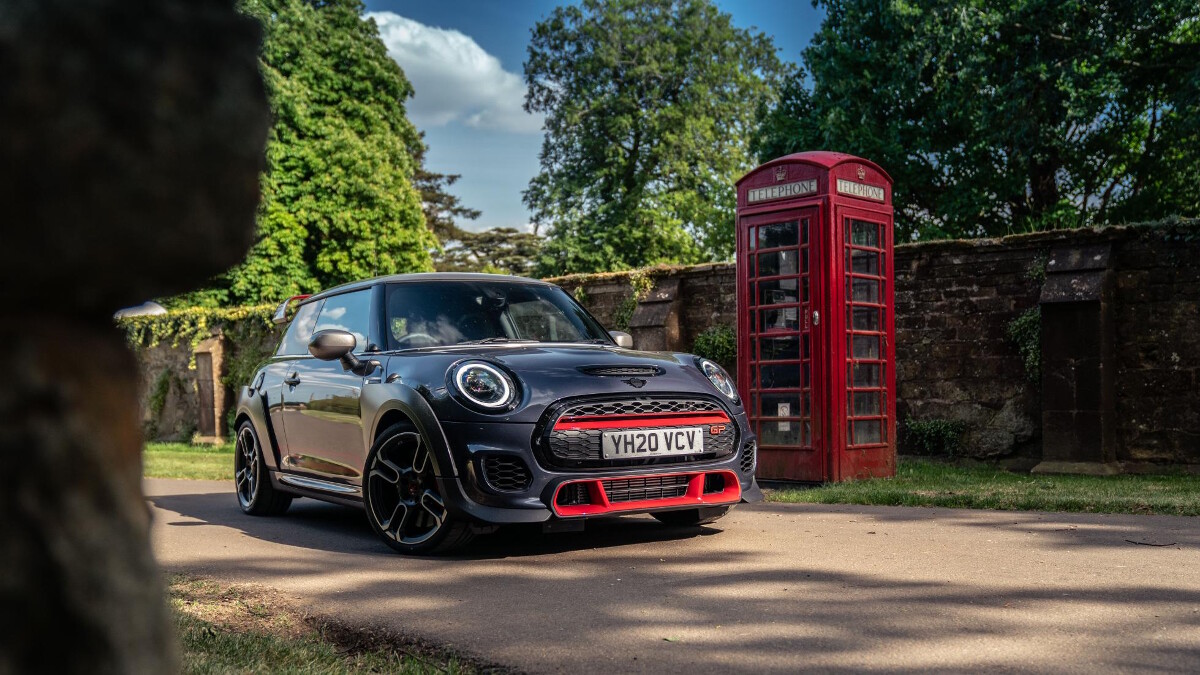 The ride-height drops 10mm lower than a Mini JCW, and on those handsome wheels, with larger brakes squeezed inside them, the GP’s stance is fabulously squat. The suspension is a one-setting passive system, so you can’t toggle between any comfy and hard-core modes. Because a GP is supposed to be hard-core all the time. Otherwise, why not buy a standard JCW with rear seats?

Speaking of which, at 1,255kg, the GP3 weighs 70kg less than a Mini JCW three-door with an automatic gearbox. Sounds like a lot, but the GP would be 30kg lighter still if it had a manual—this is a heavy automatic. And it’s actually only 6kg lighter than a Ford Fiesta ST, which seats five at a pinch, and around 25kg lighter than the Toyota GR Yaris, which has four-wheel drive.

So, this is actually quite a hefty two-seat special. It is, however, enormously powerful for its size. 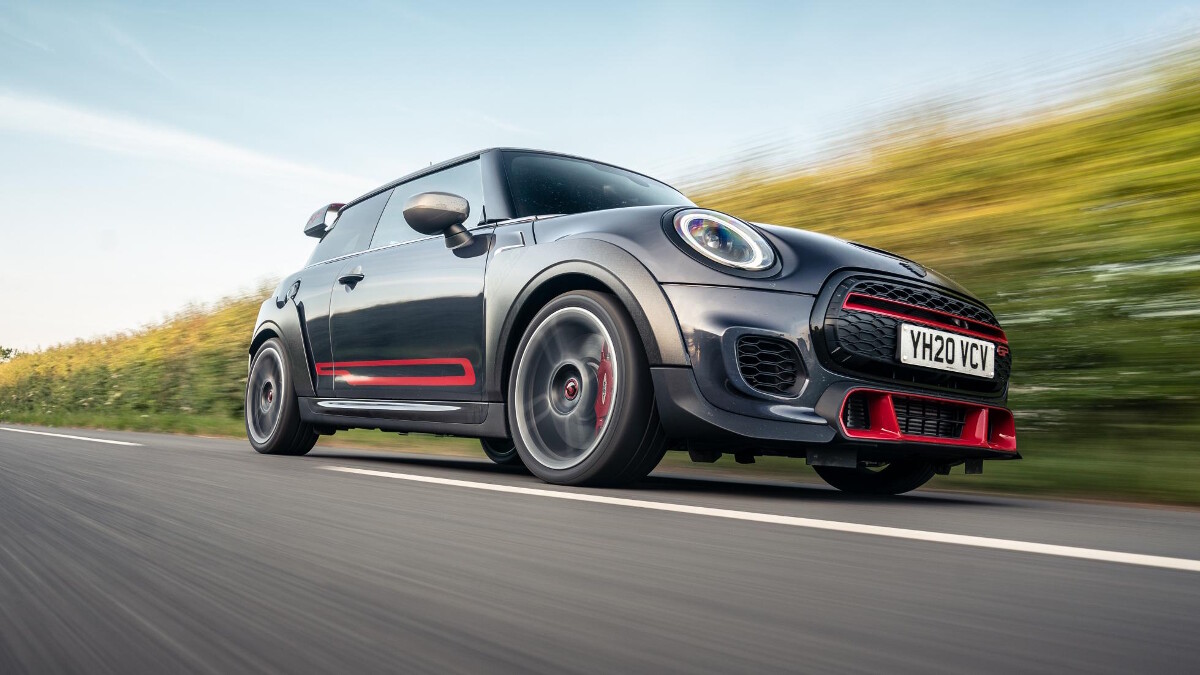 Starting the GP3 is fun: As with all Minis, rousing the engine with a well-sprung red toggle switch right next to the gear lever is just a nice touch. You get a wholly unnecessary flair of revs from the turbocharged motor, but the exhaust only crackles if it’s already warmed through.

The first thing likely to upset the faithful is how you set off. Normally, you’d slot first via an oversized gear knob atop a typically snickety mechanism. In the GP, you slide a standard BMW lever two clicks backward until a ‘D’ pops up on the screen. It’s an automatic. There’s no manual option, and instead of using its seven-speed twin-clutch gearbox, Mini has gone for an eight-speed slusher, because of the M135i engine that comes ready-mated. 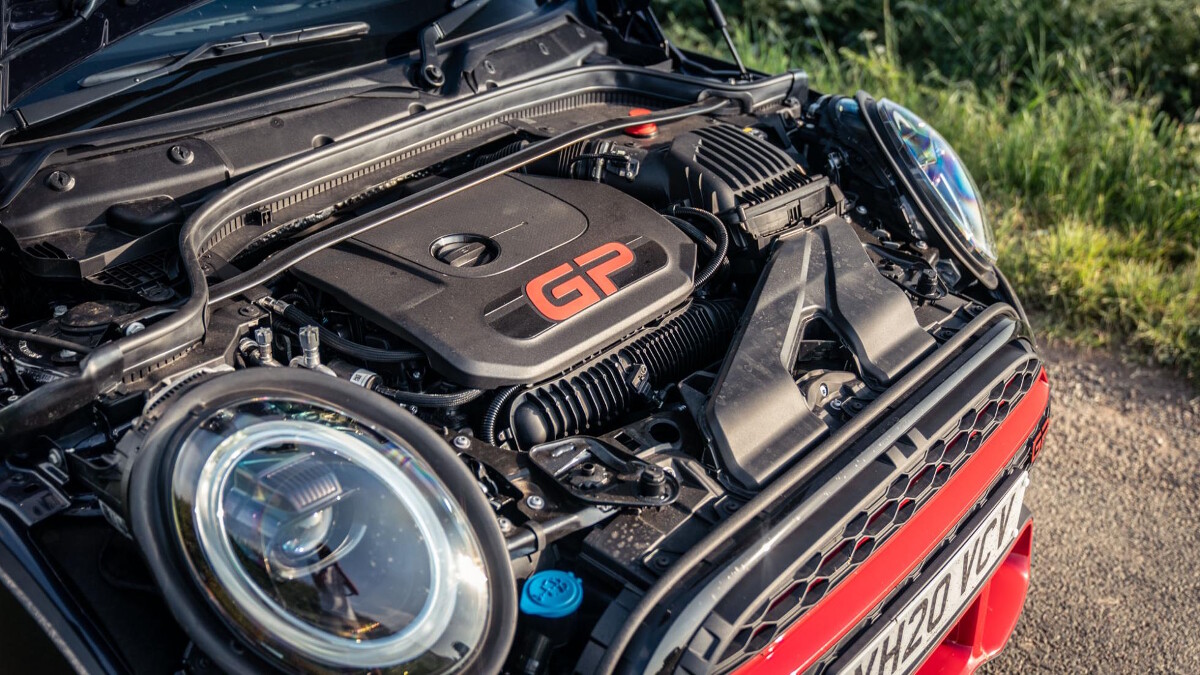 Thanks to reinforced pistons, a heavy-duty crankshaft, more boost pressure, and uprated fuel injectors, the 302hp/450Nm on tap is a massive lift from the JCW’s already potent 228hp. Mini claims 0-100kph in 5.2sec, putting the GP among the fastest front-wheel-drive cars in the world. The top speed isn’t limited, so despite having the aerodynamic properties of a Mardi Gras float, it’ll romp up to 264kph flat-out.

It’s not a great-sounding engine—the noise is synthetic and buzzy, like a wasp investigating a baby monitor—and emissions filters smother the outrageous small-arms fire we’re used to from a Mini exhaust. But the speed it conjures up is bonkers. Off the line, it’s among the world’s fastest front-drive cars, but in gear, a GP will demolish machines costing twice its huge £33,895 (P2.14 million) price.

It’s not long before the GP makes it abundantly clear it’s not like other Minis. It has a totally different personality—an ice-cool, efficient, eminently German precision. Where a standard JCW smokes away power in wheelspin and muddles around with torque-steer, the GP claws monumental purchase out of the road. It is a rabidly fast bit of kit, once you’re through the good old-fashioned turbo lag. 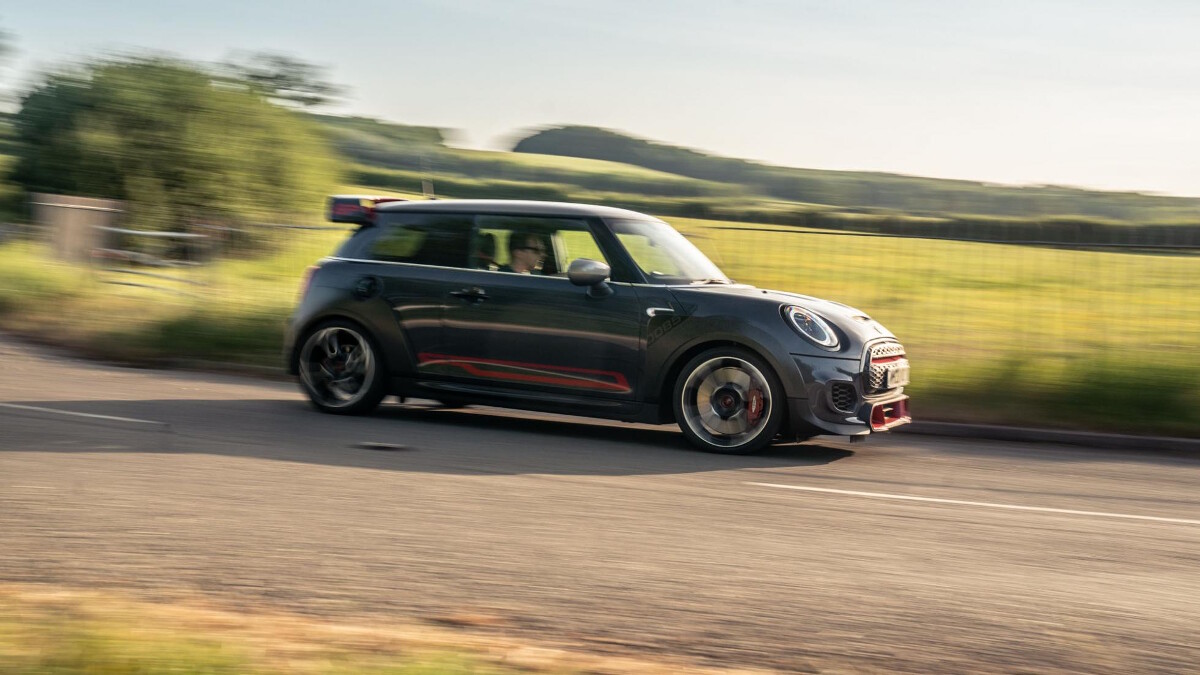 Apparently, maximum torque is on hand at 1,750rpm, but ideally, you want 3,000 revs spooled up before it really feels like the GP’s on boost. Then it vaults through the gear in one big, spring-loaded bound, dispatching straights with an Audi RS3-like disdain.

The ’box allows you to lazily hold the left paddle and let the downshifts slot home when the computer decides. Foolproof, but antisocial. Demand to override and the changes are rounded-off, or ignored until the ones ’n’ zeroes say so.

Mini’s argument is the same one that’s rife across the fast car industry: Paddles make the car faster around a track (it’s quicker around the ’Ring than a BMW M2), it’s easier to drive for a wider audience, letting Billy no-skills keep both hands on the wheel all the time. But it’s come at the same cost other victims of a manual-ectomy—keeping the driver at arms’ length from the action.

And the GP has the same un-Mini-ish attitude to corners as it does to straights. They’re inconveniences to be eaten and dispatched. The GP simply hasn’t heard of body roll. Can’t comprehend understeer. You can chuck it in, feel it stick, and fully lift off the throttle, but it won’t wiggle. The sheer amount of grip the GP generates is spectacular, and it’s not even wearing a particularly trick tire, or apparently bending the air to its will. 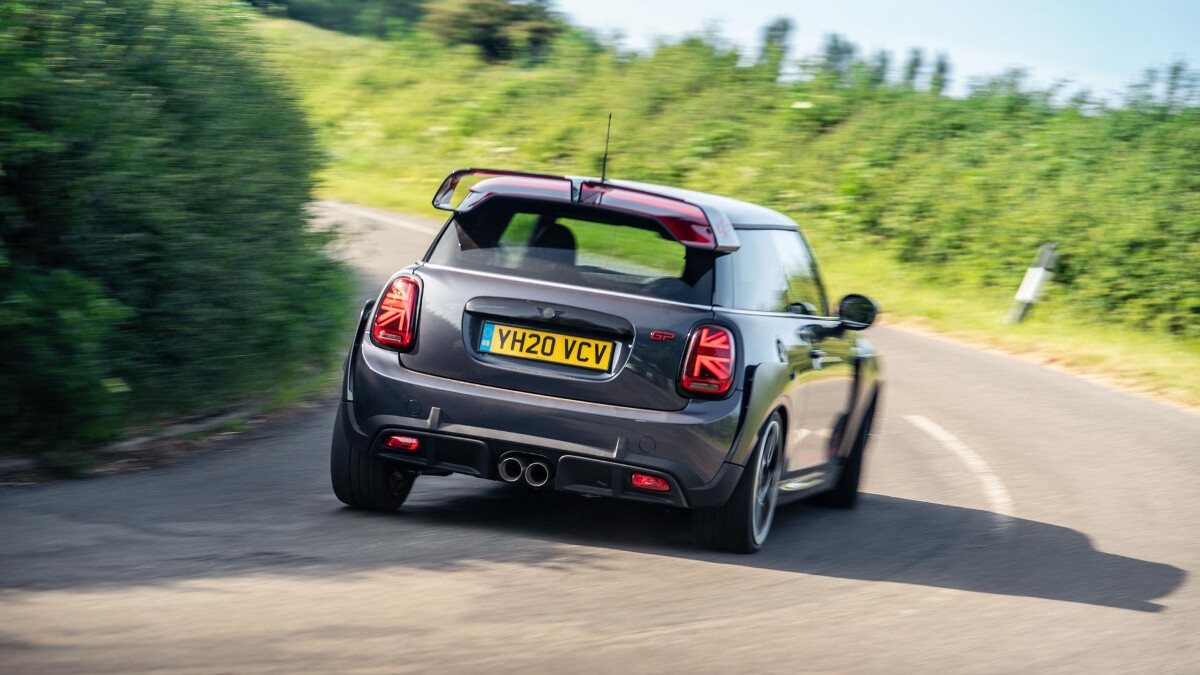 Turn all the traction control off. Find a bend with some dust on the apex. It won’t care. The Mini GP doesn’t have that sense of humor. It looks like a clown, but it’s more Joker than Ronald McDonald. The GP’s all about superhero looks, but it’s no laughing matter.

Mini claims 16.2km/L—we saw 12.8km/L on average, while surfing the torque on a highway easily knocks economy past 17km/L. Bear in mind that beneath the kitsch filler cap, the GP does request 98RON super-unleaded. CO2 emissions are 167g/km—meaning a £540 road tax hit in the first year of ownership. 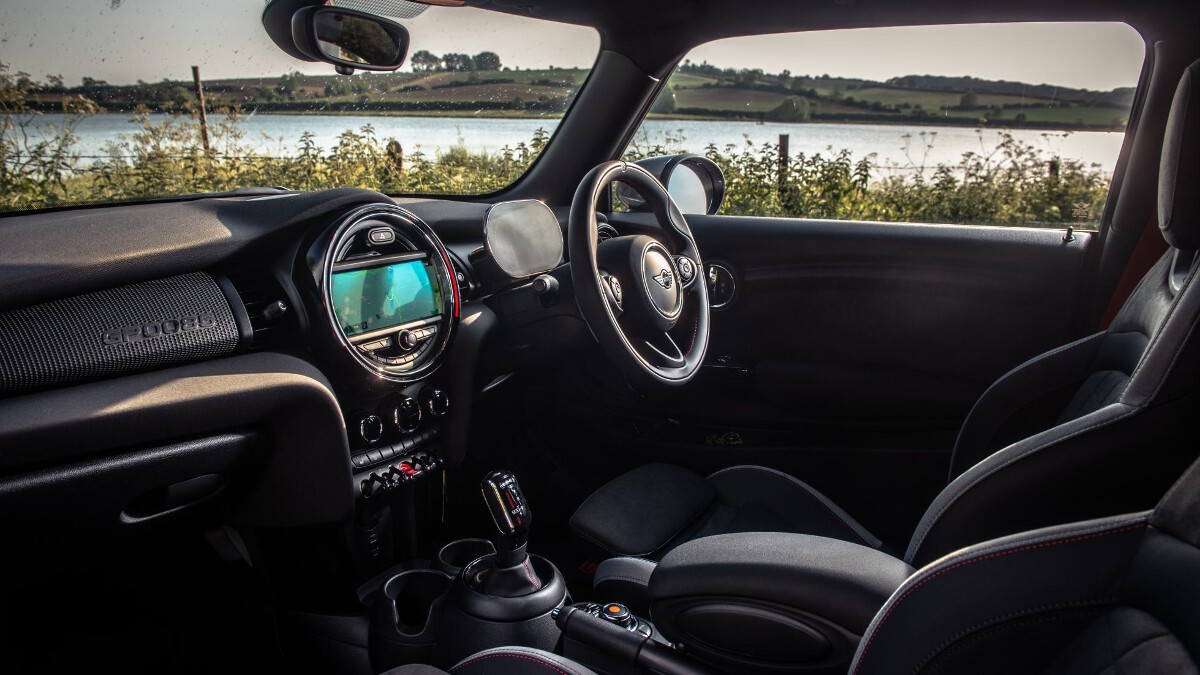 As ever, you drop properly low into the Mini, finding the driving position long-legged and natural: bang-on. Behind the steering wheel, a pair of 3D-printed aluminum paddle shifters; above, the Mini Electric’s digital instrument panel, with red graphics replacing green. Over your shoulder, a tomato-red strut brace and a dusty window, because in the name of hard-core, Mini’s put the rear wiper in the same skip as the rear seats.

And yet, the remaining chairs are no slim-backed bucket jobs—they’re the generously padded, heated thrones from the standard Mini JCW. There’s a full iDrive setup, dual-zone climate control, and electric windows, while proper door handles get the nod over fabric straps. The most extreme Mini ever made even retains its folding armrest, which gets in the way every time you try to rip the handbrake. 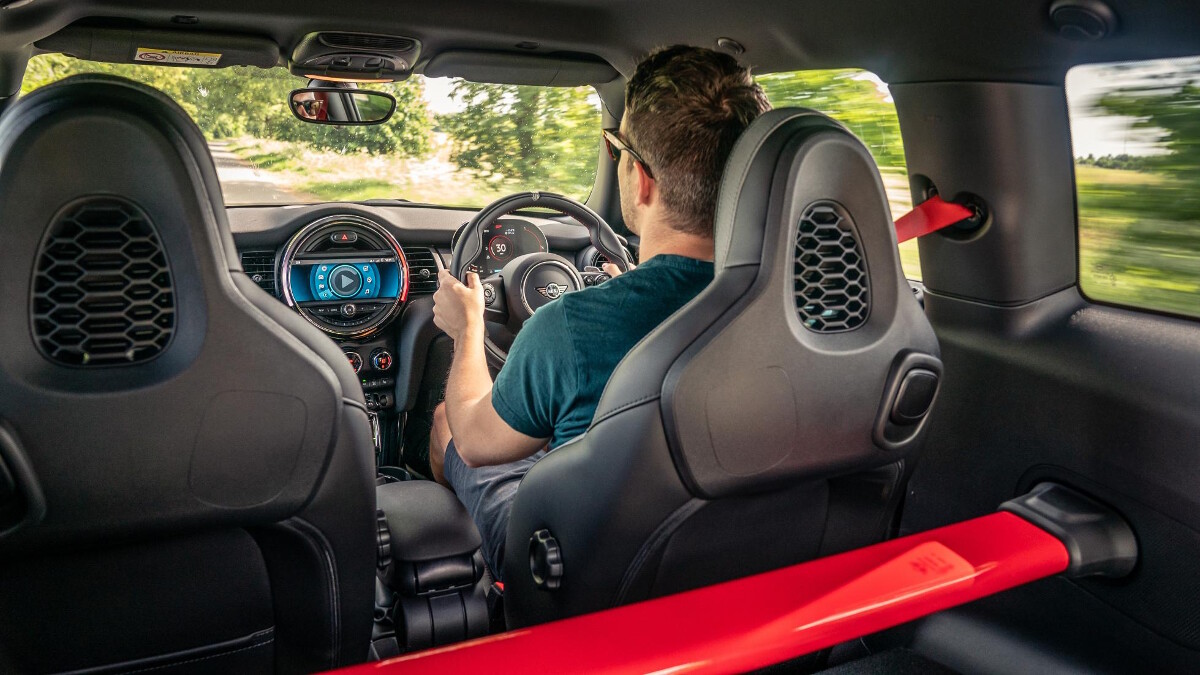 In fairness, Mini GPs have always been weirdly spec’d. They come along toward the end of the car’s life cycle, junk the rear seats, add about 20hp, and harden the suspension, but retain the estate agent’s mod cons. The GP3 is an odd mix, then. It’s loaded with toys, the JCW-spec seats are comfortable, and the slurry auto ’box is easygoing around town. But because the firm ride—that’s so beautifully controlled at lout speed—is so jarring when merely pootling, it’s not exactly an ideal commuter. And the aero kit generates a load of wind noise above 125kph. It’s like having a mountain bike on the roof.

Oh, and that strut brace in the back? Mini quietly admits it’s there mainly to stop shopping in the cargo area from sliding forward during an emergency stop. In which case, why’s there no luggage net beneath it? Who is this car for, besides the richest of Mini fans? It doesn’t seem to wholly cater to track-day fanatics or about-town posers, either. 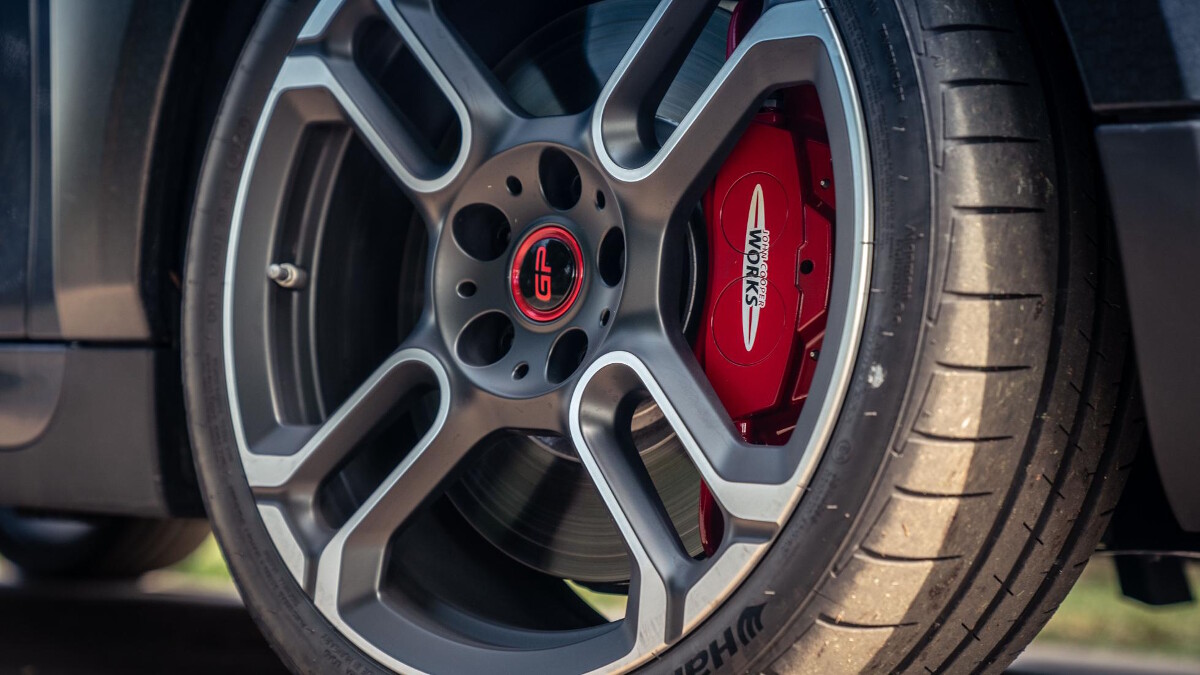 Strange car, the Mini GP3. It contradicts itself.

It’s a car with one of the most bonkers road-going bodykit ever, but very little aerodynamic effect. It ditches the rear seats, gets lightweight wheels, and even does away with the rear wiper, but it’s not very lightweight. The car’s extremely stiff, yet it’s loaded with creature comforts. It’s hugely powerful and fast, but by borrowing a standard BMW gearbox instead of using Mini’s own trademark-excellent manual, it’s very undramatic to drive. And the handling is completely un-Mini-ish—hyper-polished and professional, grippy and surefooted. 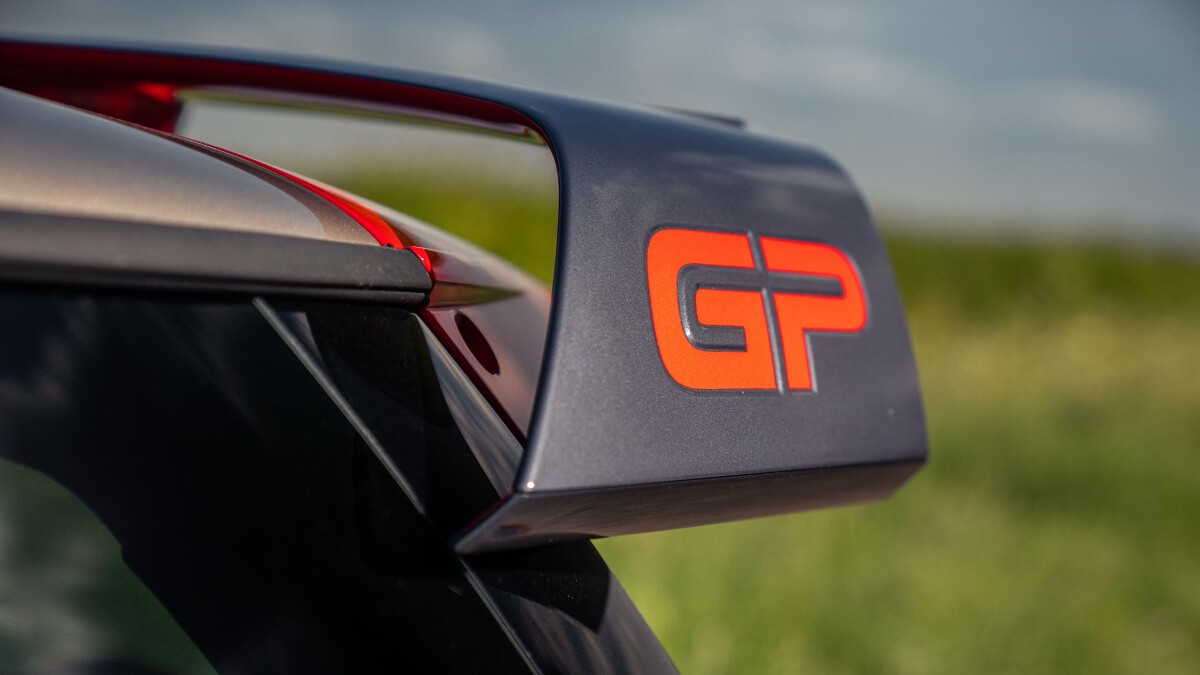 That’s great if you want to go fast, but for a run-out special Mini, shouldn’t it offer more than that? We think so. A Mini GP should be a hoot on track, but chasing lap times more than sane-speed giggles feels like the wrong path for the ultimate Cooper to take.

Make no mistake, this is a devastatingly capable hot hatchback, and one that on pure point-to-point pace alone, is a giant killer. But by the same token, it’s also a bit of a speed-obsessed one-trick pony. 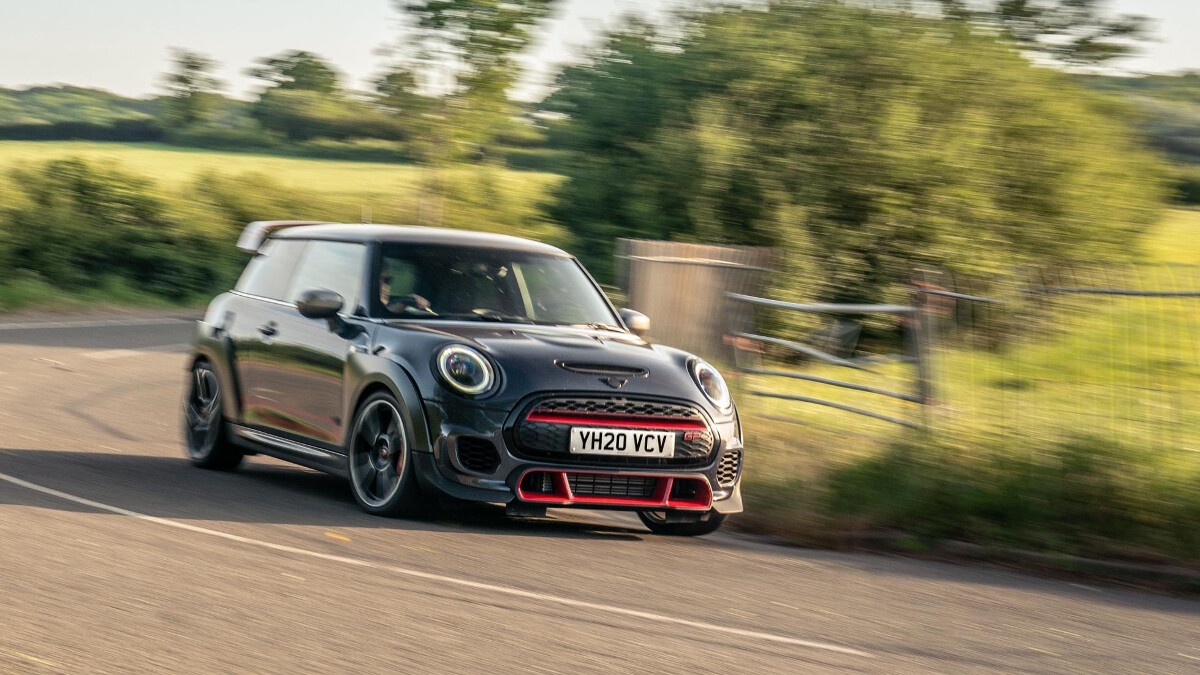 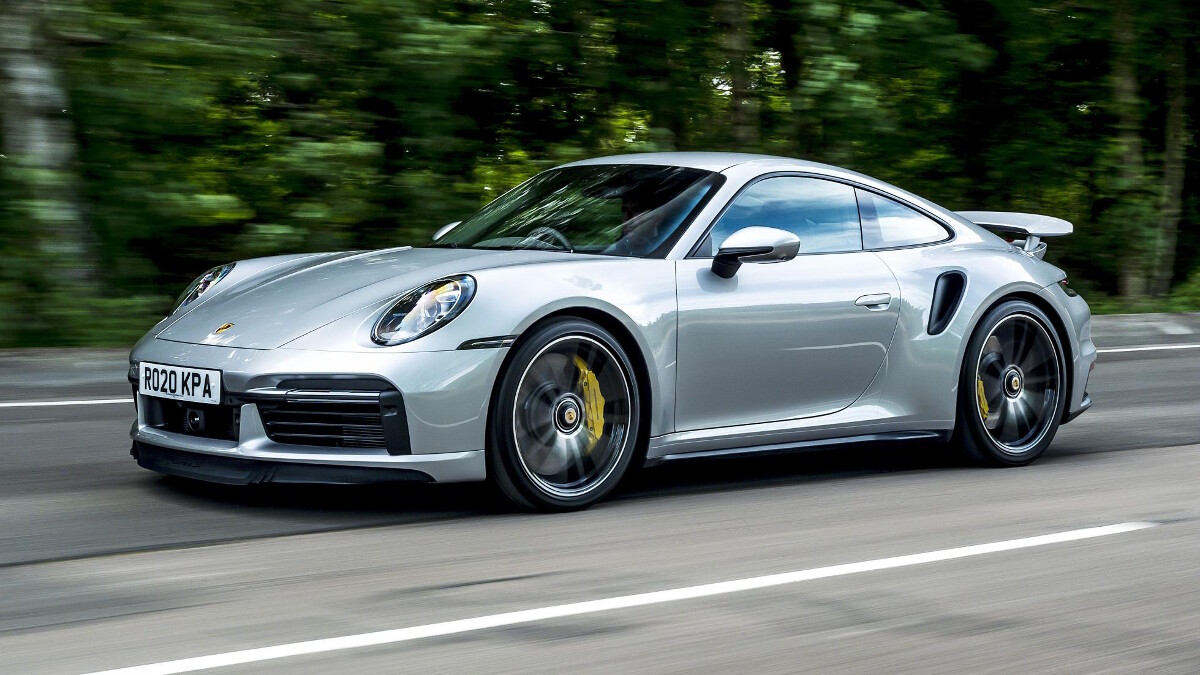 Porsche has built the best 911 Turbo ever
View other articles about:
Read the Story →
This article originally appeared on Topgear.com. Minor edits have been made by the TopGear.com.ph editors.
Share:
Retake this Poll
Quiz Results
Share:
Take this Quiz Again
TGP Rating:
/20