This is how the Angeles City Four Wheel Drive Club rolls

We were smitten by the experience
by Paulo Rafael Subido | Aug 26, 2018 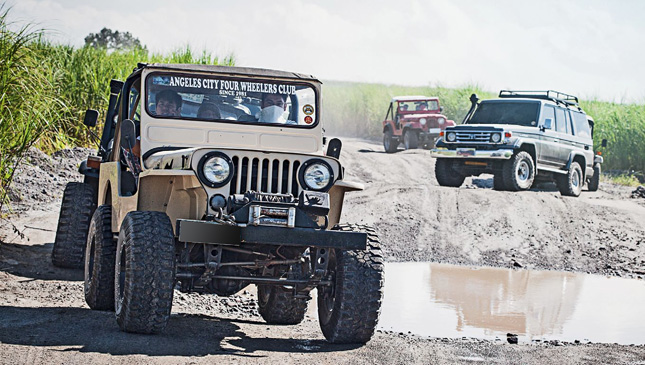 We are 20km in, traversing the Manchatian River in Pampanga. Overhead is a very long section of bridge on the SCTEX. It is quite surreal to be here, especially because the only view we are familiar with is the one from the highway. The flowing water is very deep in some areas, and the loose, uneven and soft surface is nothing but treacherous. Large boulders hiding underneath the murky surface catch us unaware a few times; there are loud thuds and crashing suspensions. It’s a normal thing.

But the 80 Series Land Cruiser we are in is tough, and its driver is an expert. We are confident. There is strength in numbers, too; they say that when traveling in an inhospitable land, it is vital to be in a group. The first rule of off-road driving is to never venture out alone.

Our crew of 19 hardcore rigs is a sight to behold. We can now see what makes off-roading so addictive for some people. Man and machine have to work together to maximize each other’s capabilities. The constant sense of danger and adventure gets the adrenaline pumping.

But above everything else, we think the high point of the endeavor is that it inspires camaraderie and togetherness. If someone gets stuck, they can count on you to recover them. And if you are the one in need of help, your fellow club members will rush to give you a pull. All the people here have built their own rigs, and are very good mechanics to boot. Spare parts, tools and expertise abound for Hiluxes, Land Cruisers and Pajeros should anything break. 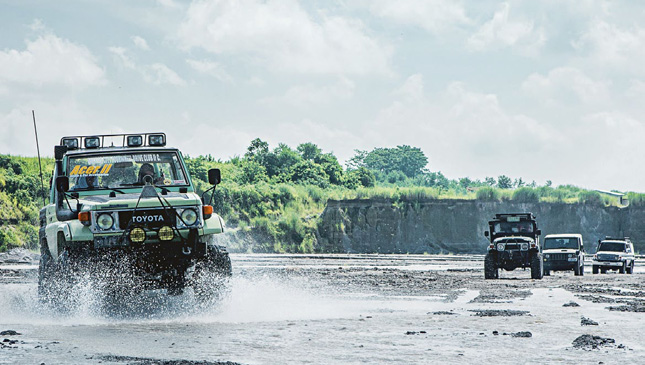 We’ve already helped recover a few less-experienced drivers and their rigs that have gotten stuck on the flowing river. This is a normal part of the off-road experience. And what an experience it is with the Angeles City Four Wheel Drive Club. “It is different here every time,” says Randy Icmat, the skilled driver of the LC80 we are in. The terrain changes drastically whenever it rains, so the trail never stays the same.

Randy adds that some club members ran into trouble just last week when the rains came. Flash flooding can and does happen. Thankfully, the only casualties were a few bent alloy rims and broken suspension components. The stories are priceless, though. We look up at the sky and it is clear. It’s safe to be out on the river today.

“The club was created in 1983,” narrates Rey Liwanag. “In this region, we have different terrains that are suitable for off-road driving—we have the hills in Bamban and the lahar in Porac. That’s why many people here love off-roading on any given Sunday. It’s what we like to do.”

There were three boys who started it all, he continues; they crossed the Abacan River and had a blast. Word spread, and the hobby has expanded since then, with the club now having more than 50 active members. The group grew in leaps and bounds during the Mount Pinatubo eruption because concerned citizens wanted to help the community in monitoring the lahar levels. Rey says he was around to help with the emergency operations. The expertise of his group was vital in the rescue of numerous residents, particularly in the town of Bacolor. When a natural disaster strikes, you can be sure that these guys will be the first on the scene to give a helping hand. 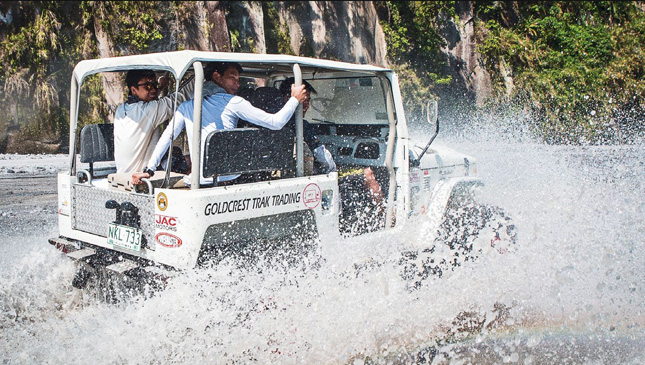 But today, it is all fun. We are heading to a waterfall that was only recently discovered by one of the members, and each of the rigs is filled with food and refreshments. When we arrive at the base of the hidden waterfall, a massive lunch with all the comfort food and Kapampangan delicacies you can think of is laid out. We also finally get to meet everyone in the rigs. It is a family event, and every driver has his wife and kids in tow. The younger ones are quick to take a dip in the water.

“Off-roading is an outlet from the real world. You feel refreshed, and you get to know nature,” attests Anthony Lingad. “My daughter loves the adventure. It is a family experience.” Said daughter, eight-year-old Rica, likes the waterfalls and river crossings. She’s always out here with her dad, and she even says that she wants to drive her own rig when she grows up. Olive Pallasigue, meanwhile, actively supports her husband Carlos’s hobby. She started joining him only three years ago. She had never felt inclined to tag along prior to that, but after experiencing off-roading, she became hooked. “The purpose of the club is to bring their families and have a good time,” she shares.

Evan Nepomuceno recalls that the most memorable trip he has been on with the group was an overnight trek to Mount Tapulao, the highest peak in the Sierra Madre mountain range. It was a camping trip, and all the members agree that it was really fun. They are planning to do it again soon after the rainy season ends. Everyone is looking forward to it.

We cap the day by returning to the spot underneath that stretch of bridge under the SCTEX. Its massive shadow offers us a respite from the sun. As if by a magic, a lechon appears from out of nowhere, and it is carved on the bed of a red Hilux. As the feasting continues, I cannot help feeling right at home with these guys. This is the essence of having a good time on four wheels. At the end of the day, nothing beats being in the company of family, friends, and your beloved 4x4 rig. It is what the Angeles City Four Wheel Drive Club is all about, and it is indeed good. 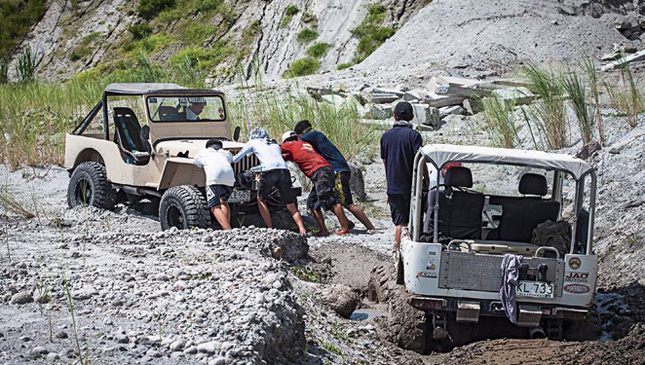 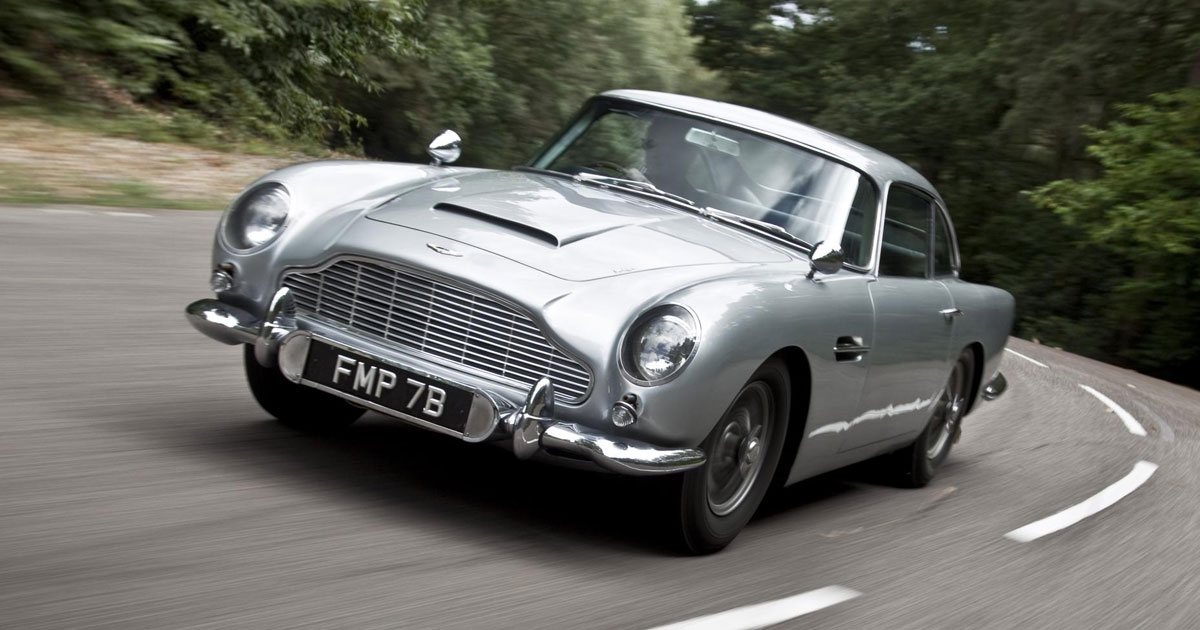 What it's like to drive the original Aston Martin DB5 from 'Goldfinger'
View other articles about:
Read the Story →
This article originally appeared on Topgear.com. Minor edits have been made by the TopGear.com.ph editors.
Share:
Retake this Poll
Quiz Results
Share:
Take this Quiz Again
TGP Rating:
/20