10 Images: The marvelous BMW 2002 Turbo on the streets of Tokyo

We have a secret meeting with the M2’s great-grandfather in Japan
by Rowan Horncastle | Feb 23, 2019
CAR BRANDS IN THIS ARTICLE

Once upon a time, there was an era when turbocharging wasn’t just seen as the master key to unlock the laborious WLTP labyrinth. Back in the day, turbos came with a capital T and were toys the naughty boys at the back of the engineering class played with.

See, back in the ’70s—unlike today—you didn’t lash a turbo to a downsized engine to make the same power with fewer emissions. Oh no, you strapped a turbo to the same engine as everything else to make more power and more emissions. Because more is more. And some of the time, more is better. Case in point: the BMW 2002 Turbo. 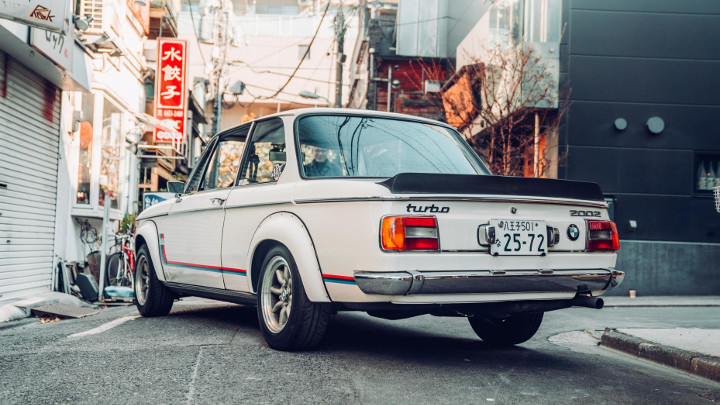 It was the first German series production car to employ a turbocharger. First hinted via the BMW Turbo concept from 1972, this gull-winged proto M1 in a Global Hypercolor t-shirt had a four-cylinder 2.0-liter M10 engine. But instead of this tech trickling down to supercars, it slid straight down the ladder to pump up Bee-Em’s ‘Neue Klasse’ sedan: the 2002. 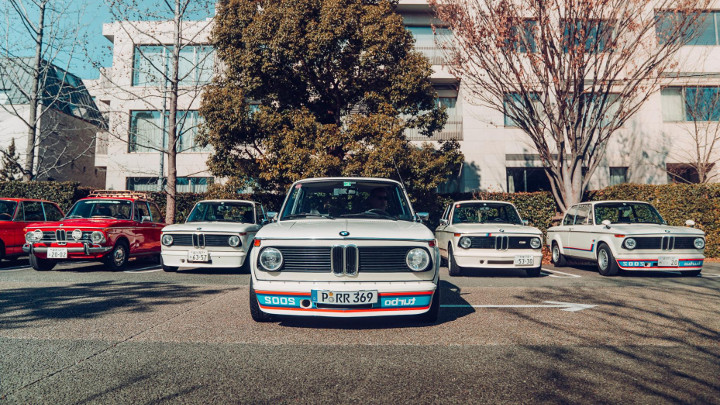 The humdrum but exquisitely proportioned ’02 debuted in 1968 with just 101hp. A few years later, the folks at Munich decided to turn up the heat, thanks to twin Solex 40 carburetors and higher compression, good for 119hp and a top speed of 185kph.

They weren’t finished there, as in 1971, the Tii rocked up. It featured mechanical fuel injection, power swelled to 130hp, and engineering niggles and creases were ironed out to improve reliability. But in 1973, the engineers threw everything at it to make the 2002 Turbo. 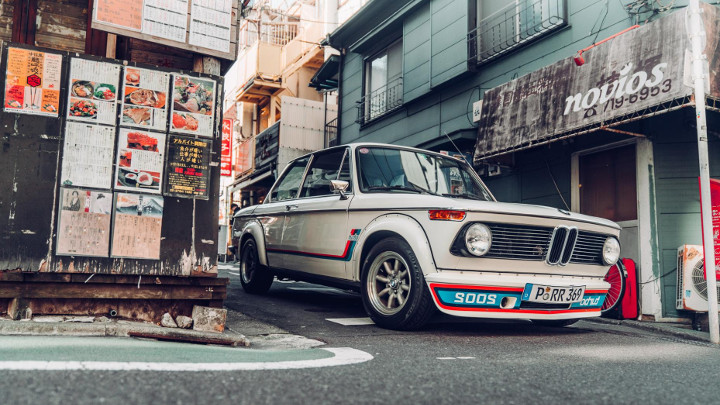 Confident that the chassis could take more oomph, the Turbo was built around already tried and tested Tii, but with a KKK (don’t worry, not that lot) turbocharger to gain a further 40hp on top of the already punchy Tii for a nice, round 170hp. Shoving a big ol’ turbo on wasn’t all, though; the compression ratio was modified from 6.9:1 to 9.5:1, and an oil cooler was added. Meanwhile, bigger brakes were used to cope with the extra power, a limited-slip differential was added for better high-speed cornering (and skids), and high-speed tires wrapped around wider wheels were fitted under those screwed-on flared arches. 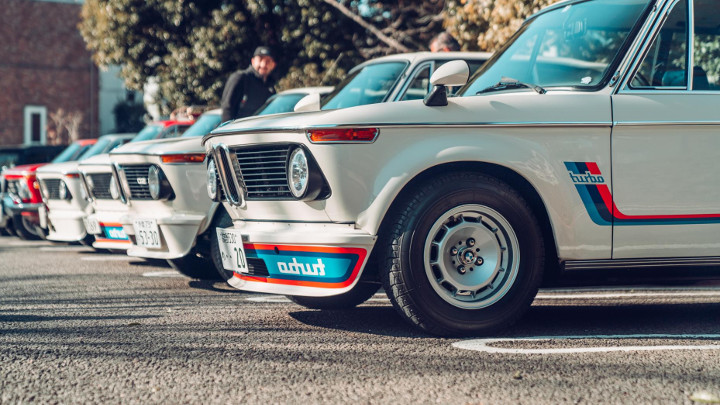 Yes, let’s talk about those arches. And the looks in general. Aren’t they fab? See, you may think that Liberty Walk is a pioneer by going mad with a rivet gun, but the likes of Porsche, BMW, and basically anyone with their toe in the waters of racing had been doing it for yonks. 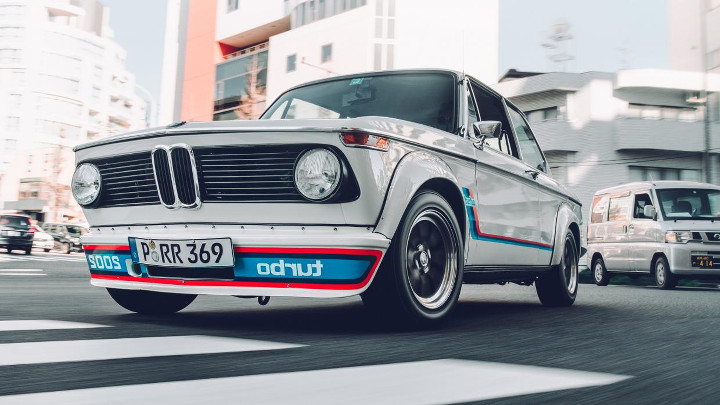 Early press cars had ‘2002’ and ‘turbo’ scrawled across the front spoiler in reverse script so any car in front of the Turbo would know exactly what had just suddenly appeared behind him at a considerable rate of knots on the Autobahn.

However, some people lacking a funny bone took offense to this and deemed it an irresponsible measure, so BMW dropped it for the production model. But that hasn’t stopped aftermarket reverse scripting being added to pretty much every Turbo in the land. Just google ‘BMW 2002 Turbo Jump’ now. That’s an original press shot. No wonder it had a reputation as a troublemaker back in the day and that everyone now wants the reverse tattoo on their car. 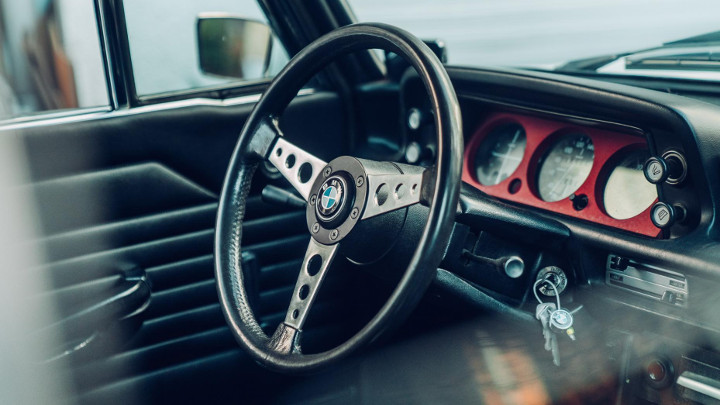 Inside, the cabin had an injection of sportiness. The standard seats were replaced with comfy-yet-more-sporting items, there’s a leather three-spoke steering wheel, a turbo pressure gauge was added to the right of the dashboard cluster, and everything was housed in a red-facia dashboard (a nod to the then corporate sponsor, Texaco) to emphasize that this is the quick one. 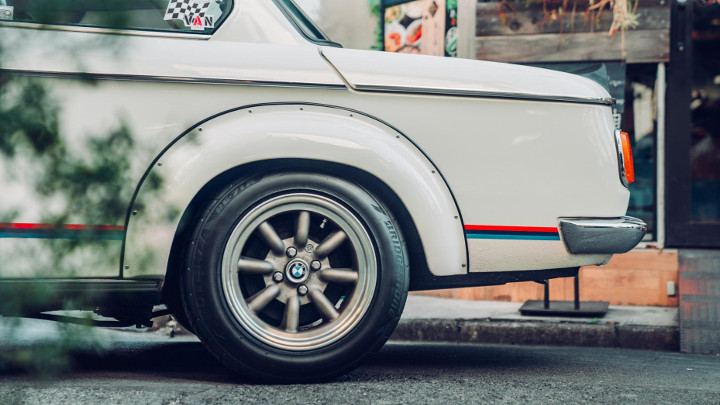 But the BMW 2002 Turbo didn’t go down well. It was born into a tumultuous political storm of huge reforms of road traffic laws and speed limits in Germany as well as the ’70s oil crisis. In total, only 1,672 units were ever built between 1973 and 1975 (all left-hand-drive; the steering column for right-hand-drive cars couldn’t be fitted because of inadequate clearance near the exhaust manifold), but a few have made their way over to Japan. Because every cool car in history seems to be in Japan and perfectly maintained. 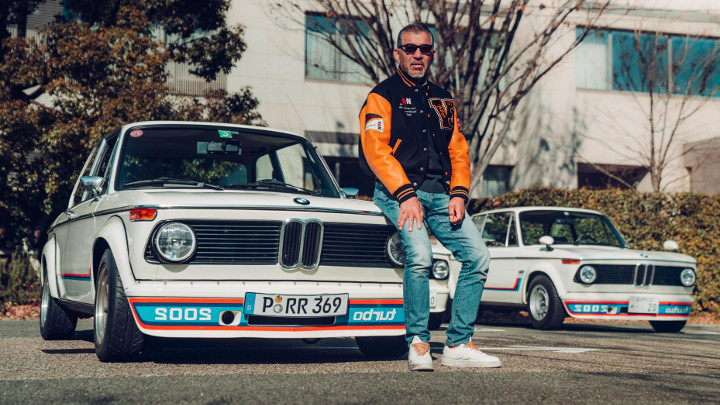 This tremendous example is owned by Toshio Shizu, a fabulously stylish gentleman from Tokyo who has fantastic taste in cars, jackets, and trainers. Loving the fact it was the first turbo car in the world, and that it looks the dog’s danglies (we’re not sure of the Japanese translation), he decided to buy one. As did a few of his mates.

This just seems to happen in Japan, which is incredible. And like everything—and we mean everything—a BMW 2002 looks even better when fitted with a Japanese number plate. Seriously, people of the world, there’s no need for rhinoplasties and Facetune—just shove some green numbers on a white plate with some kanji on and everything goes from a five-under-club-lights to a seven. 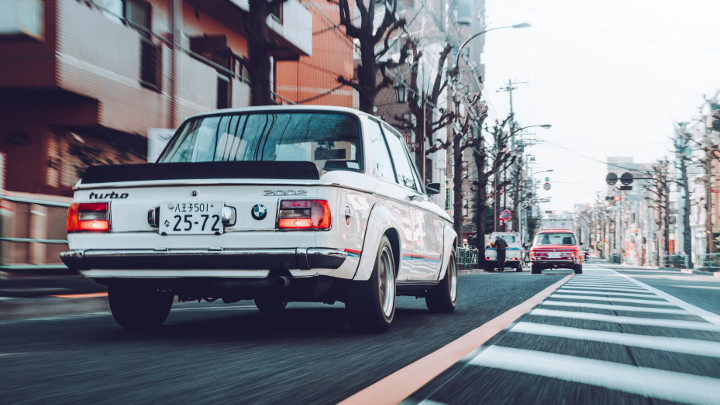 Considering this was the first German series production car to employ a turbocharger, you’d expect to be able to pop the kettle on before the turbo wakes up, but it’s a lot perkier than that. A low drone turns to a buzz overladen by an intensifying hiss as the turbo spools, then at 4,000rpm—the delivery point for peak torque of 234Nm—you get the hit of the whole fruit.

Windows down to make the most of the rasping pea-shooter exhaust, there’s a smack of forward momentum comparable with a modern warm hatch. With a lack of insulation from the outside world, though, it feels a heck of a lot faster than that. And, with cult status, minters like this are now swapping hands for upwards of £60,000 (P4.1 million).

We want one. Do you? 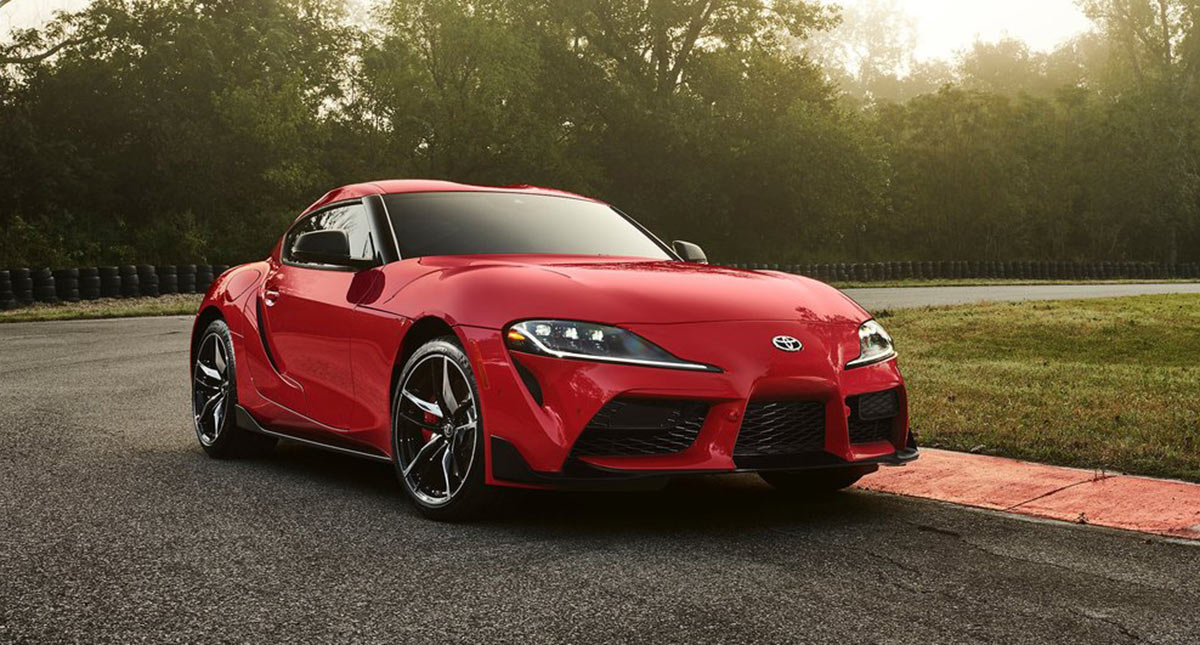 A design analysis of the 2020 Toyota Supra
View other articles about:
Read the Story →
This article originally appeared on Topgear.com. Minor edits have been made by the TopGear.com.ph editors.
Share:
Retake this Poll
Quiz Results
Share:
Take this Quiz Again
TGP Rating:
/20