Is the new Range Rover still fit for royal duties? 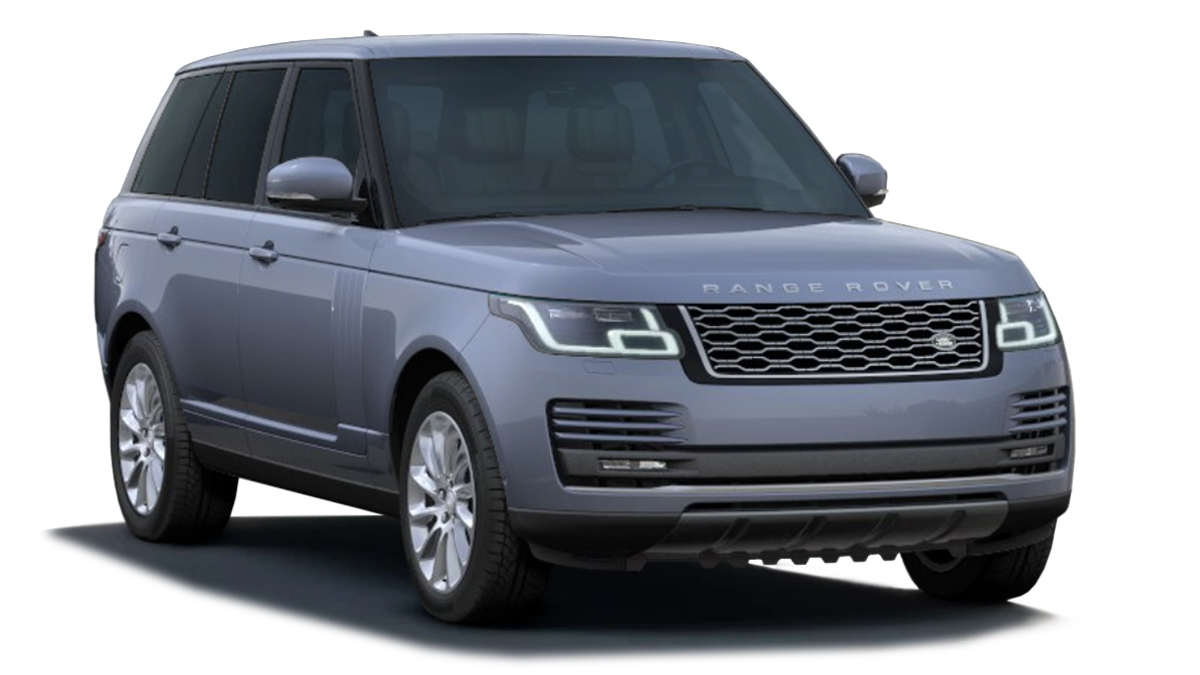 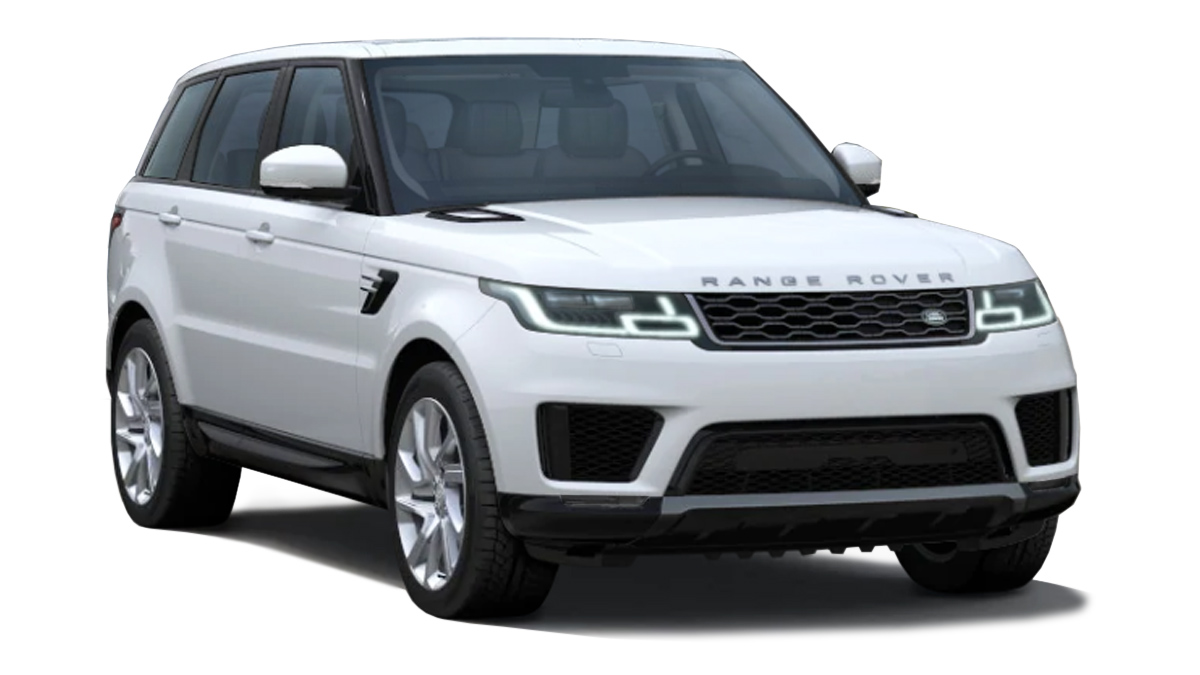 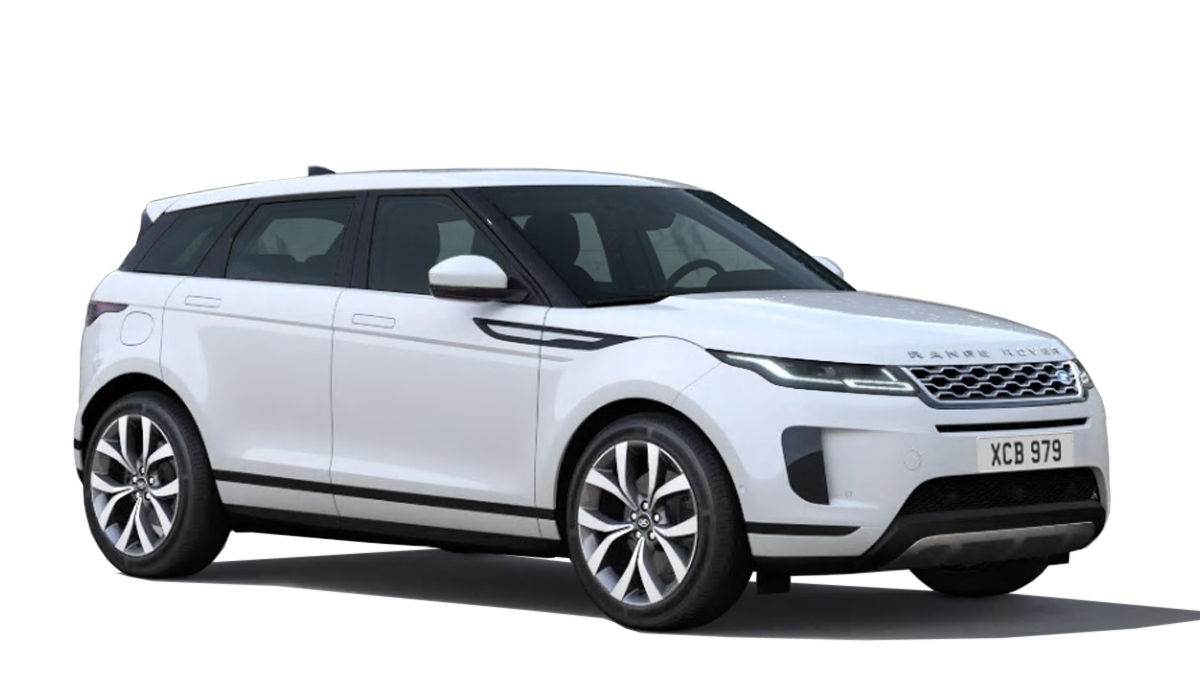 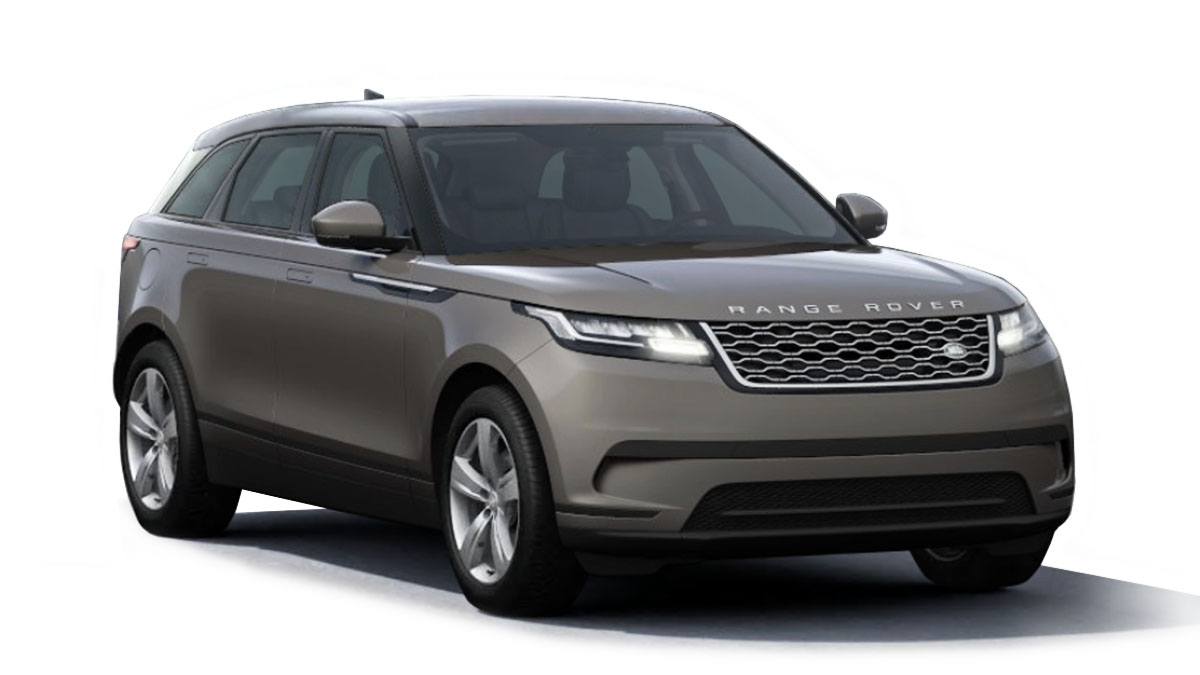 On the weekend Her Majesty The Queen turned 96 years old, she was photographed touring her Sandringham estate not in a horse-drawn golden carriage or her custom Bentley limousine, but in a Range Rover. The Queen has had tens of Landies over the decades, but her favoured car to drive oneself in is a Rangie.

Since her current model is a late 2008 version, the Queen’s almost certainly waiting to see if the new 2022 Range Rover is any good before deciding whether or not to upgrade. Ma’am, we’re only too happy to oblige. Take a throne, feet up on the corgis and we’ll discover if the fifth generation of the world’s most iconic luxury 4x4 has done enough to earn the Royal House of TopGear’s official seal of approval, which we’ve just invented. 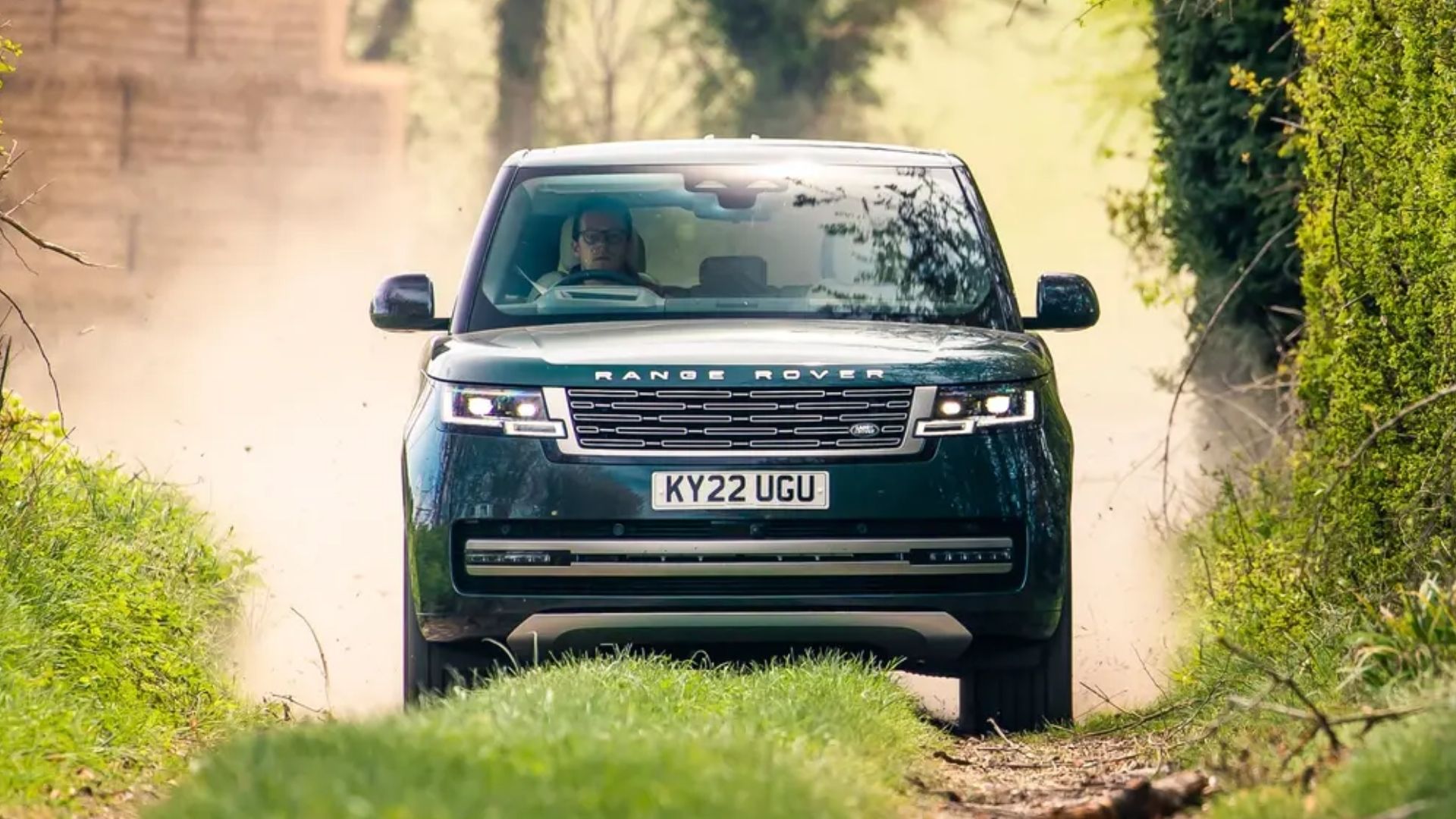 Authenticity. Sums up all Land Rovers in a word, that. Even if the toughest terrain they’ll ever tackle is the owner’s pumice gravel driveway, it’s Land Rover’s USP (and curse) to have to embody a ‘climb every mountain, ford every stream’ attitude. The new Range Rover, as we’ve become used to, employs clever ‘Terrain Response II’ traction and stability control whizzbangery that reacts to whatever all 2.4 tons are rolling across or wading through, locking differentials and adjusting throttle and gearbox behaviour on the fly.

What you’re not used to is a Range Rover that’s not a 4x4. So long as the temperature’s above a balmy 3°C and your speed is between 30 to 160 km/h, the new Rangie runs in rear-wheel drive, to reduce friction and emissions. Once it detects an unbeaten track—or you fiddle with the beautifully rendered mode screen—all four wheels are immediately powered. Any transition is as imperceptible as a butler’s cough.

For romping about your acreage, the Range Rover is still deeply overqualified. The standard air suspension can rise up to 135mm (wrecking ride quality in the process of course), and there’s the same sense of unflappable, patient off-road progress as in the latest Defender, only with less steering wheel fidget. And more winces as rogue twigs scrape their way along the smooth fuselage.

Off to a point-to-point? Of course you are. Please note the split-folding tailgate has remained (jolly good) but is still rather tardy going about its business (bad show). And the elegant new automatic folding parcel shelf will have to go if you’re considering a rifle rack in the cargo area. 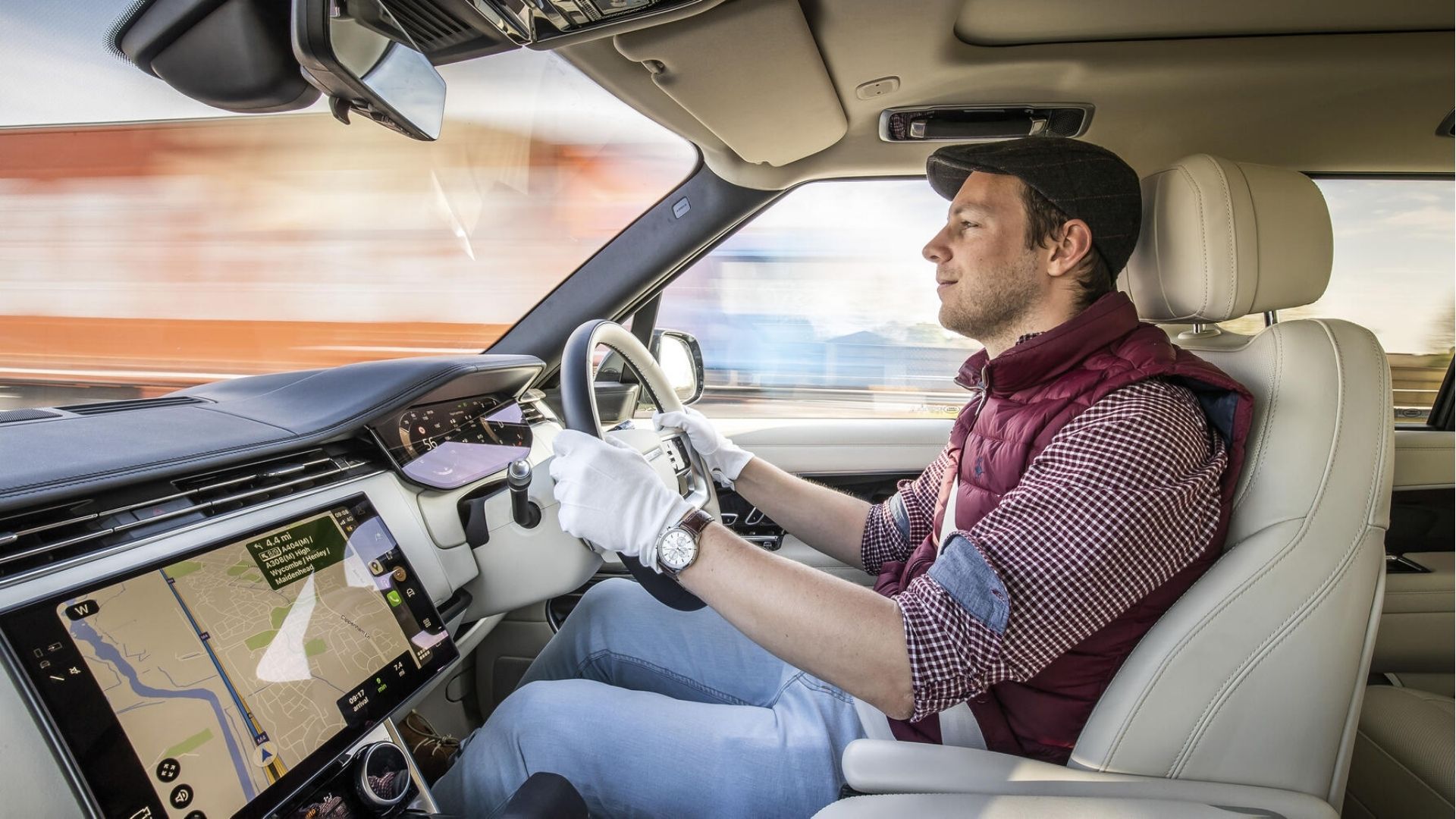 Land Rover talks about a “harmony of proportions” and “precise detailing to create the impression that the vehicle has been milled from solid.” Fundamentally, it looks like a Range Rover. From three quarters of the way round, it looks like the old one, albeit one that’s been ritually sandblasted until it’s smoother than a palace tablecloth. It’s refreshingly bereft of creases, lines and fussy detailing.

The most notable change in a design that is so reductive as to be dangerously close to ‘unnoteworthy’ is found dead rear, with slender light motifs shining through a heavily tinted black panel flush with the tapered boat tail. It’s all deeply tasteful, but should age more gracefully than the wanton aggression sold to you by BMW, Mercedes-Benz and Bentley.

What’s especially good news for the Land Rover faithful not on a royal budget is the Range Rover is the touchstone for all LR design. The pebble smooth statesmanlike repose of this car will inform the new Sport, Velar, Evoque and beyond. And by avoiding nouveau riche vulgarity, this is the only luxury 4x4 you don’t feel like a complete merchant banker inside.

3) Will one enjoy driving it? 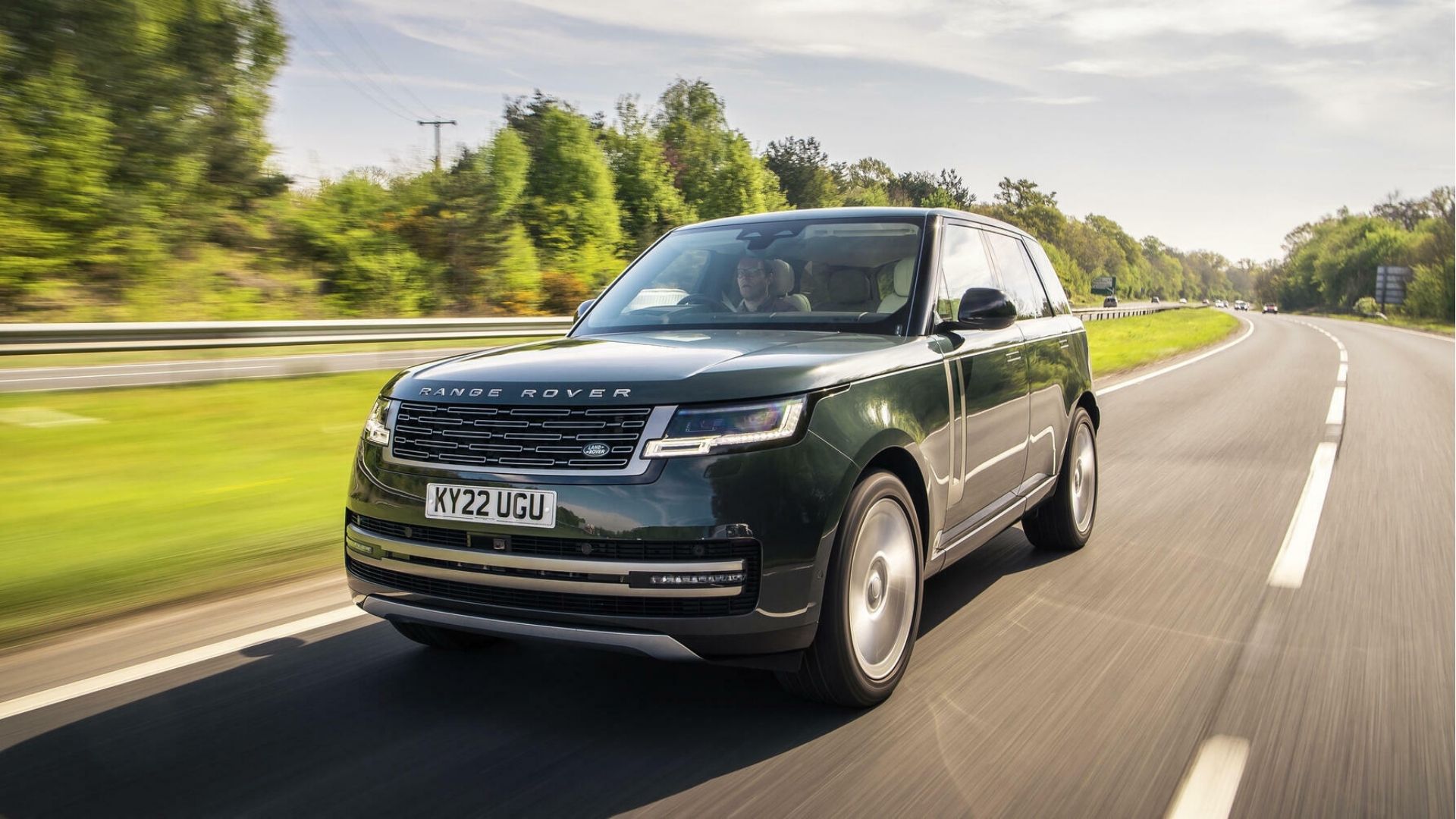 The cliché that’s followed the last few Range Rovers around is that they’re no longer 4x4s first: they’re luxury cars that happen to be several feet in the air. That was fine when the shape of a luxury car was a ruddy great barge. In the lifetime of the previous Range Rover, the kingdom was invaded by—in no particular order—the Bentley Bentayga, BMW X7, Aston Martin DBX, and if you’re really stretching the budget the Rolls-Royce Cullinan.

So it’s now less a case that the Range Rover is a high-riding S-Class and 7-Series rival, and more that the shape of luxury cars in 2022 is SUV. Obviously these come with inherent compromises, such as ‘ensuring it doesn’t topple over in a corner.’

That’s seen to by 48V anti-roll bars that are plugged into the satnav and know about sharp bends ahead before you even begin to twirl the wheel. What’s also a mighty improvement over the previous car is the wheel control. Sounds nerdy, I know, so leave it at this: the old Range Rover occasionally thudded across a pothole as if its 22-inch tires had suddenly filled with sand. The new one doesn’t.

OTHER STORIES YOU MIGHT HAVE MISSED:
MMDA: Illegal parkers keep returning after clearing operations
Since January 2022, diesel prices have seen a P43/L net increase

More ambitious powertrains will come: plug-in hybrids that’ll waft you from Buckingham Palace to Windsor Castle without waking the engine once. An all-electric Range Rover is due in 2024. But for now, it’s a suite of mild hybrid fuel burners.

This is a D350: praise be to the logical world of Land Rover badging, for it is a diesel with 350 horsepower. Now a straight six instead of a V6, its cultured and distant diesely burble is strangely reassuring, like hearing the cellar-situated boiler fire up in a draughty farmhouse. I’d miss that in an EV. Then again, with these fuel prices (at the time of writing), perhaps not.

4) Will one be amused by the tech and quality?

Lord the seats are soft. The Range Rover actually makes its most impressive first impression on your bottom. The chairs feel as though they’ve been stuffed with Labrador ears. You sit between your captain’s armrests addressing a cabin which isn’t a huge new departure for Land Rover. It’s resisted the urge to ‘do a Hyperscreen.’ Of course, there’s a touchscreen swallowing all the functions that once festooned this neck of the woods with switchgear, but it is—fire the cannon and raise the flag—a good one.

Chassis no. 994 here only had one minor screen freeze, which is unheard of given LR systems usually crash more often than an F1 pay driver. Seamless Apple CarPlay pairing. Rapid map rendering. It doesn’t even get unnervingly hot, like others’ megamonitors.

The screen takes centre stage in a cabin that plays to the gallery with rich leather, confident fillets of metal and little plastic. But I’m looking at this from a critic’s point of view, and I defer to a second opinion here, from Asprey—royal warrant holder and provider of jewellery, leather and luxury goods to the House of Windsor. Queen Victoria was a fan.

So, what exactly constitutes a ‘luxury good’ these days? According to Asprey, it’s “intricate details, exceptional quality, artisanal craftsmanship, and rarity. There may be a shift in tastes as lifestyles evolve, however, the creation of something that is truly a work of art and made in such small numbers will always make it highly covetable.

5) Can one prepare one’s cream tea in the back? 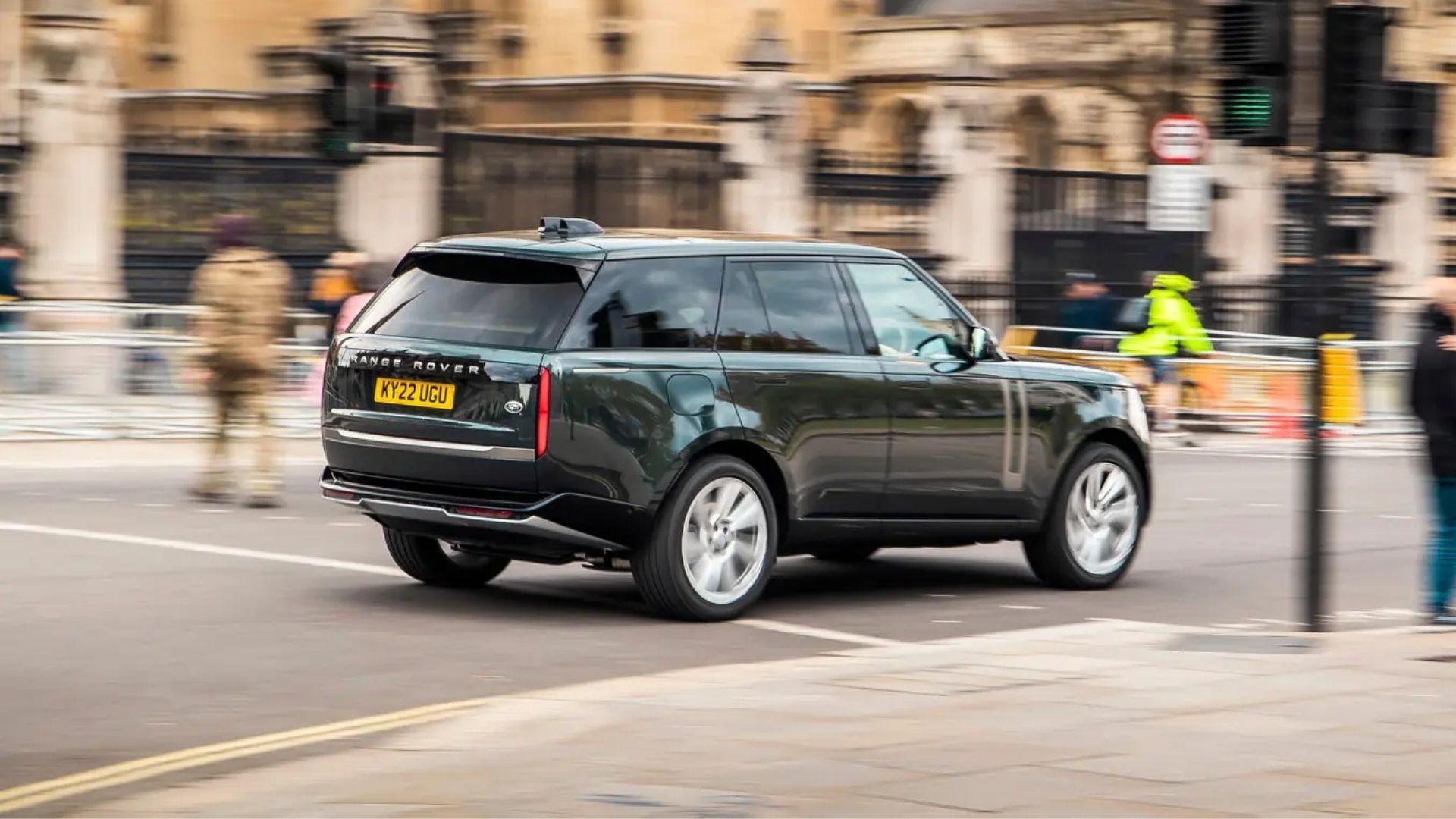 To chauffeur or to drive oneself? Land Rover has covered both bases. There’s a long-wheelbase RR stretching 200mm longer than this five-meter beast, but rear seat space is generous even in this ‘base’ five-seat bench model. I’ve a nagging feeling that travelling back here is something that is done only by minor royals and disgraced politicians, association footballers or entertainers who ‘will not be making any further comment at this time’, but I digress.

How to quantify comfort? The TopGear method is simple: to successfully cut, cream and jam (in that order, no arguments) fresh scones while blasting across Buckinghamshire. At highway speeds the Range Rover’s ride really discovers its finest hour: the air-sprung float is just-so, never wallowing, but also far less tautly strung than one of those horrid jumped-up German sportwagen types. Not that the royals mind some German in the bloodline of course—neither does the Range Rover, which now optionally employs a BMW-sourced V8.

6) How does one fare outside the Commonwealth? 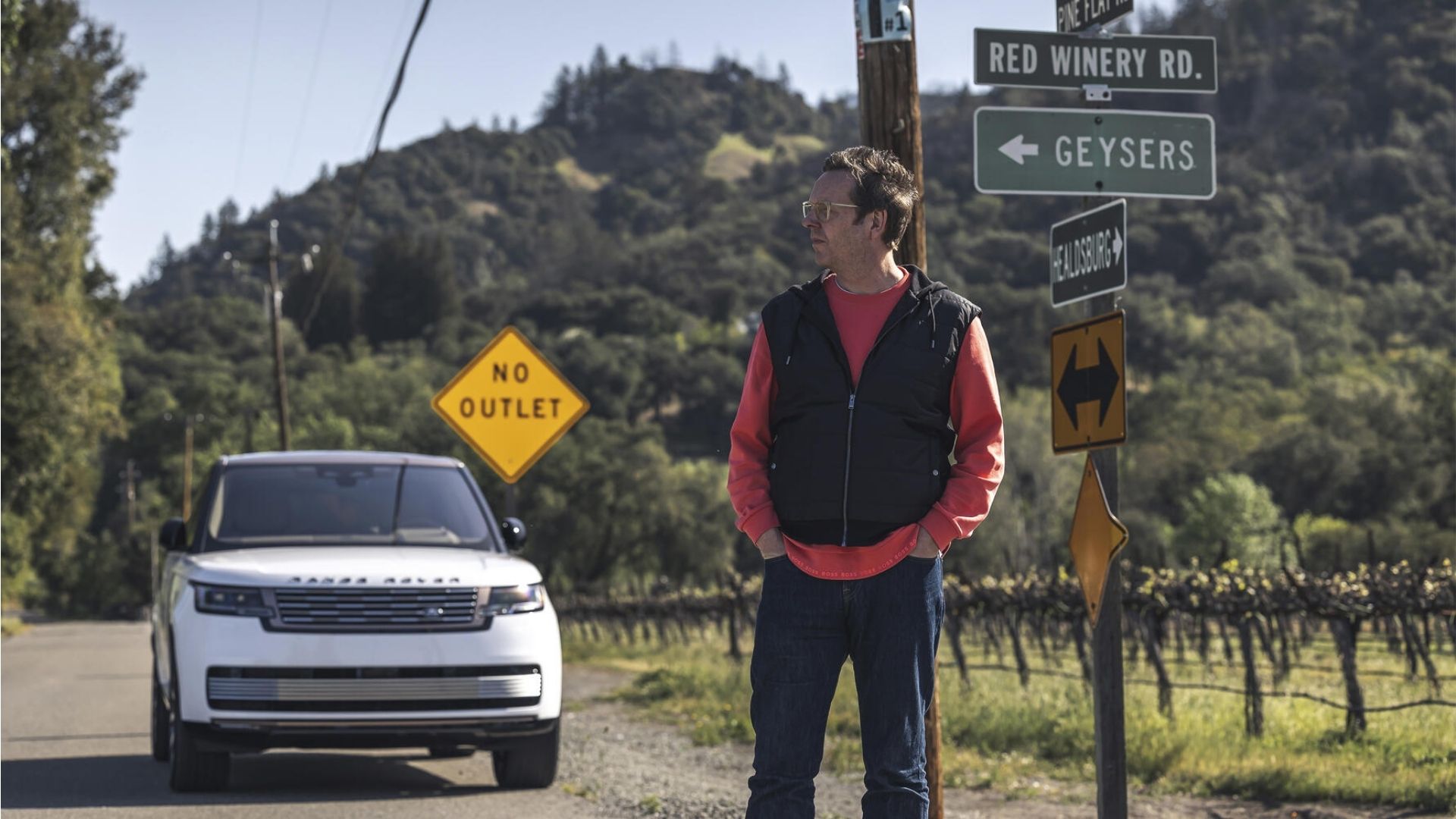 It might be apocryphal, but Keith Richards apparently once described Mick Jagger as a “lovely bunch of guys.” Whatever could he have meant? After two days and many miles in various different iterations of the new Range Rover, a similar thought lodges in my head. They’re all very good, a few of them are probably even great, but there are some behavioral...inconsistencies.

Take the long-wheelbase version, and let’s make it a P400 SV version, mainly because one of those was dispatched to San Francisco airport to pick me up (I know). I sat in the back, and decided fairly swiftly that the ride quality wasn’t quite as sumptuous as you’d hope. 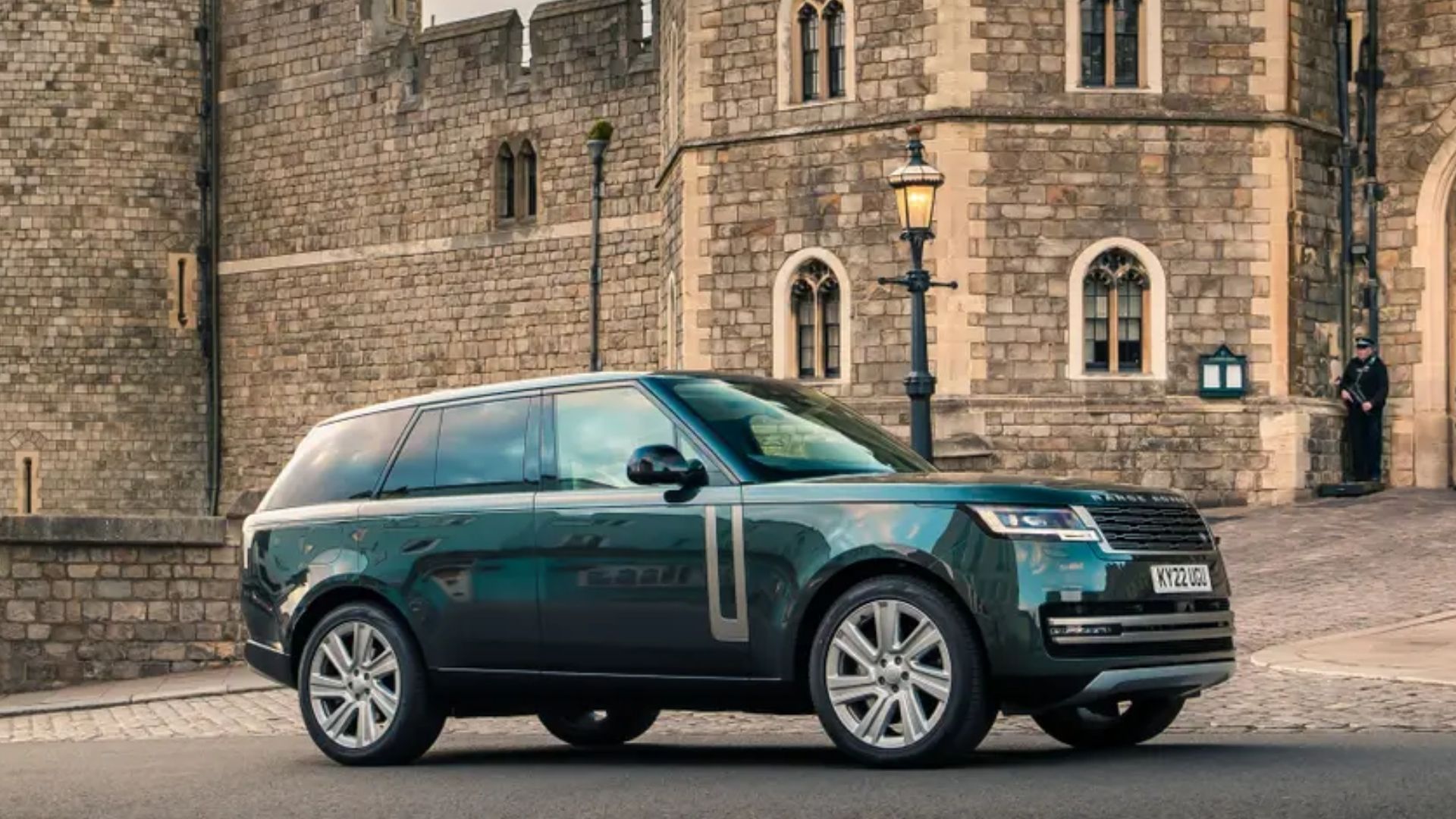 If you weren’t paying attention, it’d be possible to be underwhelmed by the new Range Rover. From all angles except the rear it looks quite a lot like the old Range Rover. Beside the (at long last) nigh-on uncrashable touchscreen and the game-changing rear steer, it’s hardly dripping with notable new features or world firsts.

So you might presume that it’s a pulled punch. Actually, it’s doubling down on what it does best and leaving the Germans to fight over pixels and widgets. This is a deeply refreshing modern luxury car, because it doesn’t seek to bombard you with gadgets and woo you with technology. It’s Jeeves with boots on, not Elon Musk.

With an on the road price now stretching into six figures, a Range Rover is a very expensive car. But it’s also a fabulously rounded product, taking the rough diamond of an idea conceived 40 years ago and burnishing it to near perfection. There is simply very little that it could do better—it’s a phenomenally versatile bit of kit. Long to reign over us? One should say so. 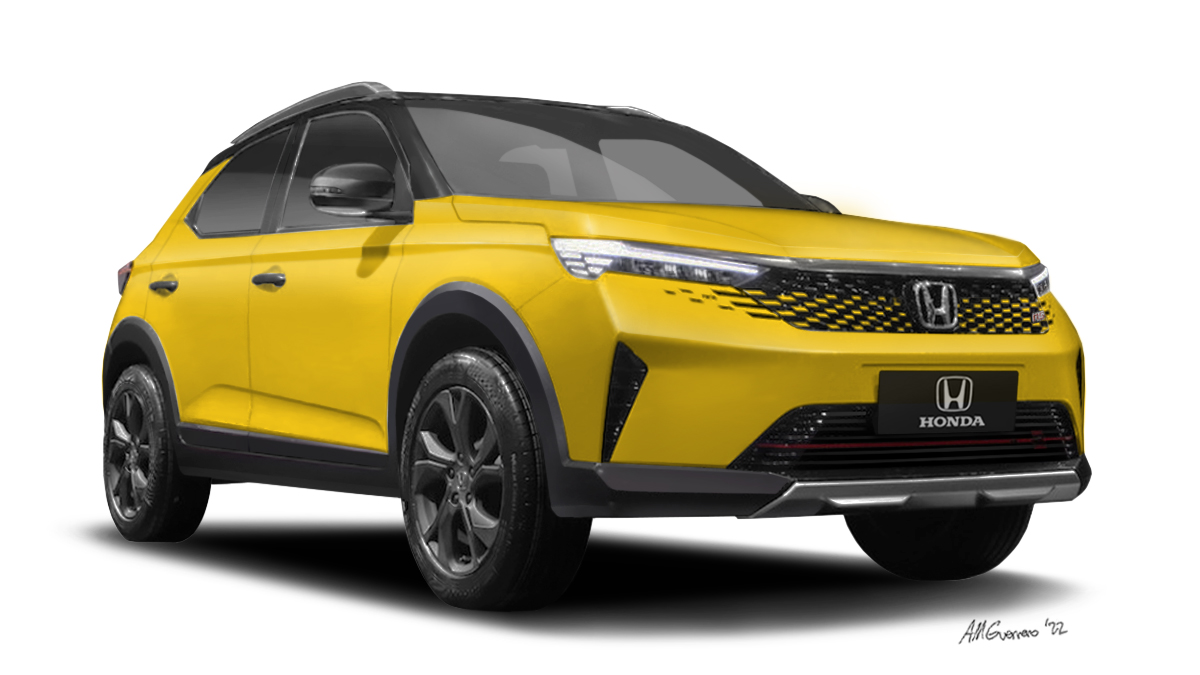 Will the production version of Honda’s SUV RS Concept look like this?
View other articles about:
Recommended Videos
Read the Story →
This article originally appeared on Topgear.com. Minor edits have been made by the TopGear.com.ph editors.
Share:
Retake this Poll
Quiz Results
Share:
Take this Quiz Again
TGP Rating:
/20