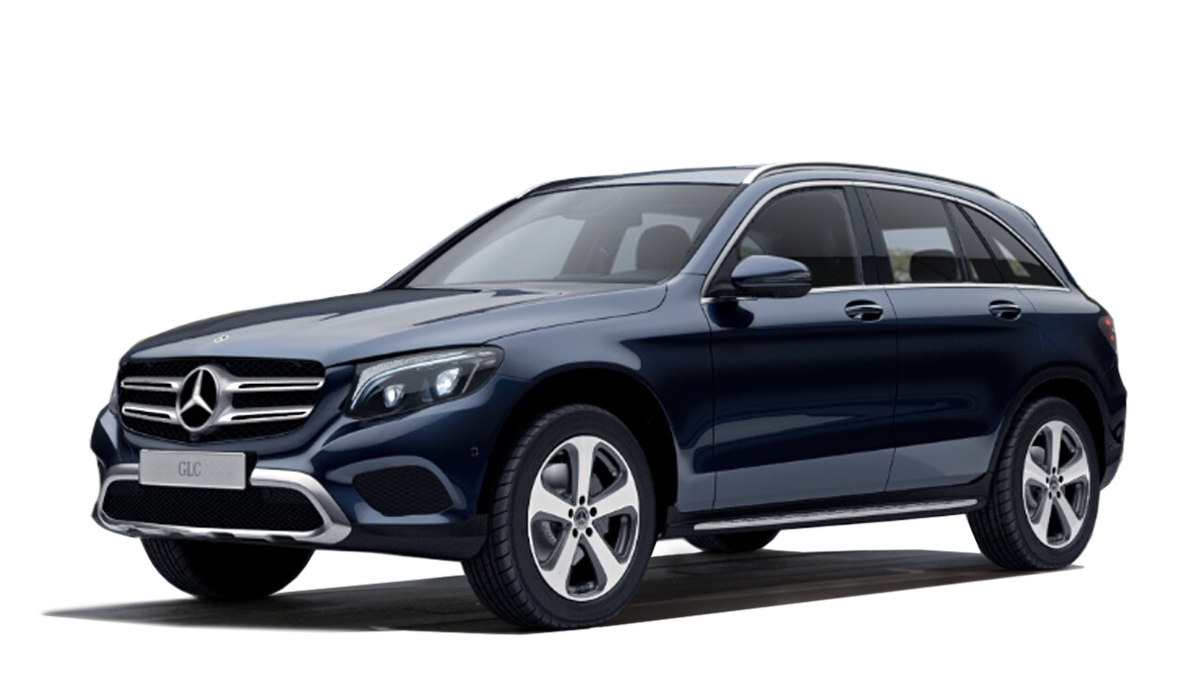 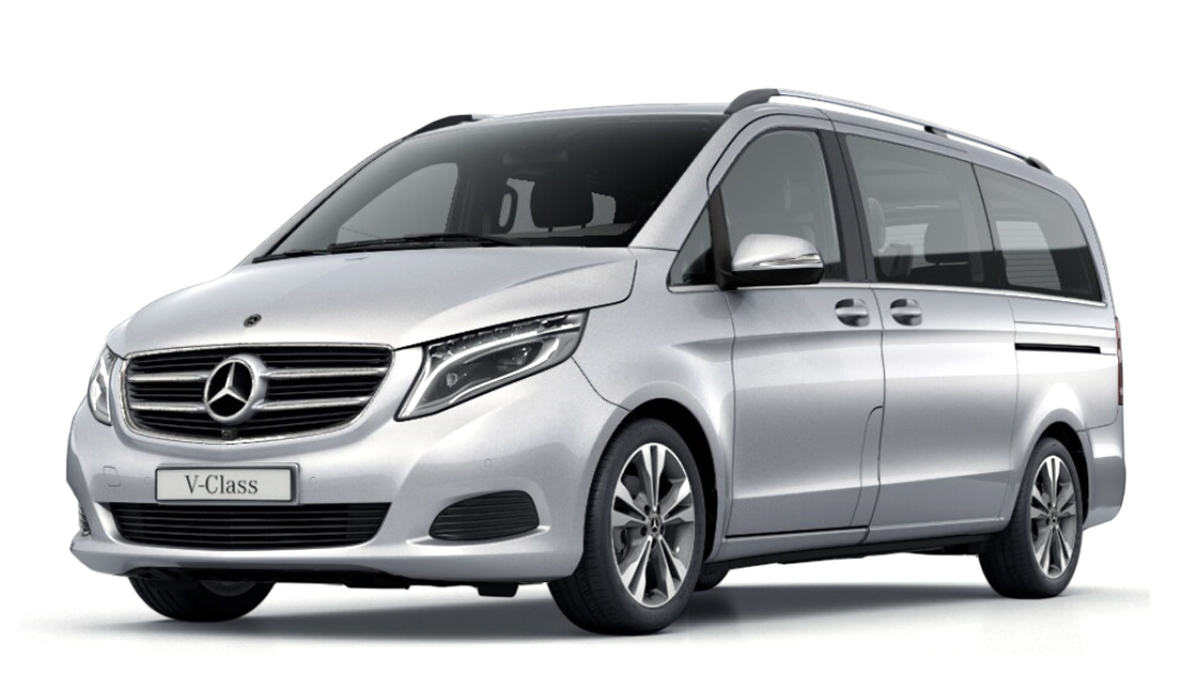 The GLC and the V-Class are Mercedes-Benz’s offerings in the midsize SUV and MPV segments, respectively, with the GLC being the brand’s best-selling vehicle for the last 10 years. This year, both models have been updated, and recently, we were given the chance to experience them as a passenger on a short trip within the metro. This allowed us to focus more on the amenities and the ride comfort of both vehicles.

I’ll start with the GLC. The new GLC 200 features a sleeker design with clean lines and sportier proportions. The front grille and the rear end look more modern versus the previous model, and the multi-beam LED headlamps have also been redesigned to match the updated fascia. 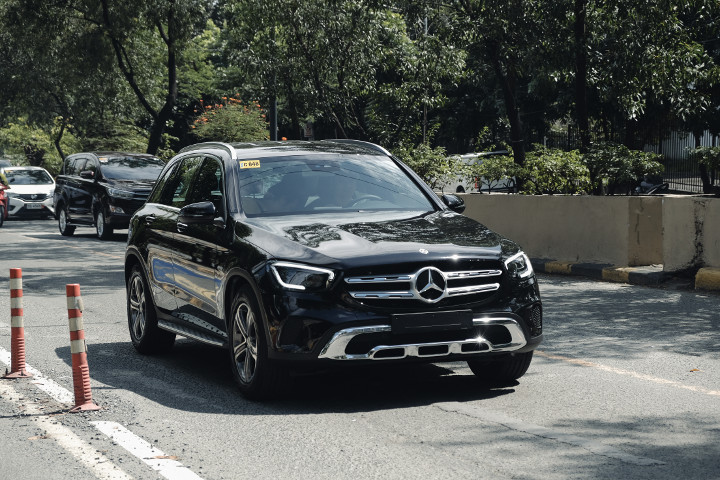 The 2019 model also comes with the Mercedes-Benz User Experience (MBUX) as standard. The system enables users to input a destination, make phone calls, adjust climate settings, switch songs, and activate features through voice command. It’s essentially an interactive infotainment system that functions like a personal assistant on the road. To activate MBUX, just say ‘Hey Mercedes,’ and it will ask you what you want it do. 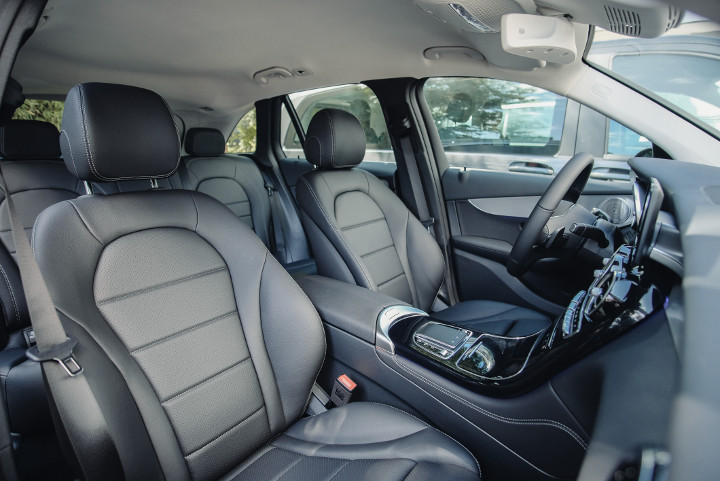 As you step in the cockpit of the GLC, you’re met with a sleek steering wheel and a multifunction display instrument. The car has multiple air-conditioning vents both on the dashboard and behind the storage bin on the center console. It was nice having my own individual controls for the A/C at the back, allowing me to set the temperature to suit my preferences. 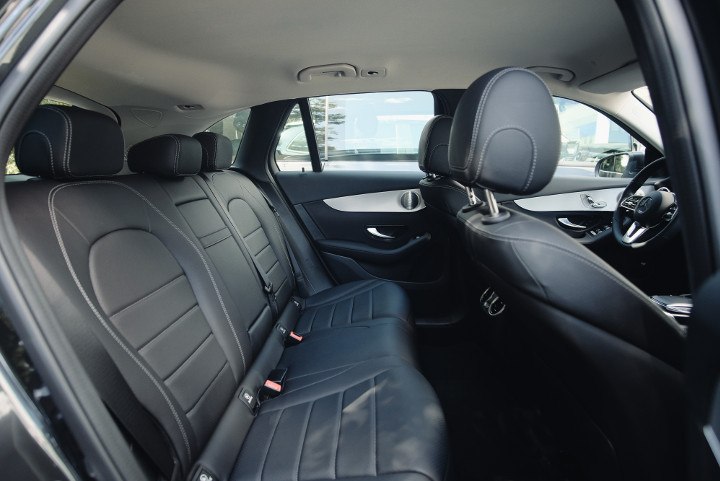 The seats are nicely padded and covered with leather. They’re comfortable perches—not too soft and not too firm. NVH suppression is good; it’s quiet inside even on busy roads, and with the Burmester surround sound system piping in music, the cabin is not a bad place to be in during heavy traffic.

Reading lights located on the grab handles also make it handy for backseat passengers to review paperwork while on the go. I personally just used it to light up my hand and see how far my hand would go until the light couldn’t hit it anymore. Immature much? Well, anyway. 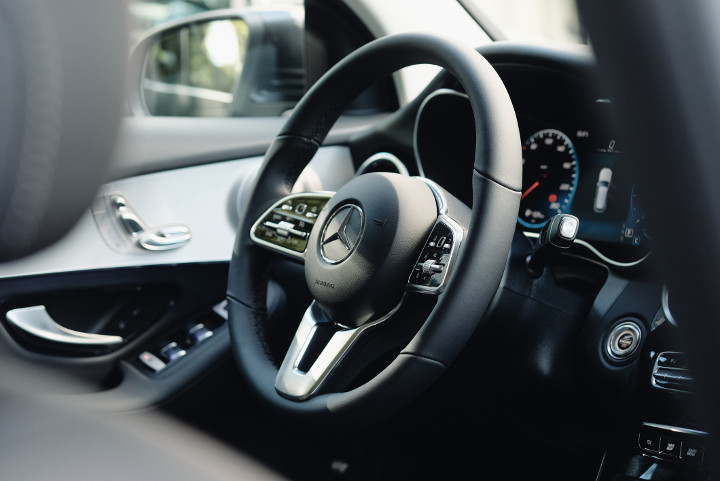 The GLC has a nice, plush ride. Even when speeding up, you don’t feel much of the acceleration from the cabin, and while this might sound boring for most of us, the people who buy these cars are mostly chauffeur-driven, anyway. You wouldn’t want to be hurled around the cabin when running late for a board meeting.

Powering the crossover is a 2.0-liter turbocharged in-line-four gasoline engine that is mated to a 9G-Tronic nine-speed automatic transmission and generates 197hp and 320Nm of torque. Other features of the GLC include a rearview camera and a self-parking mode, an improved touchpad, an all-digital instrument display, and 18-inch light-alloy wheels. 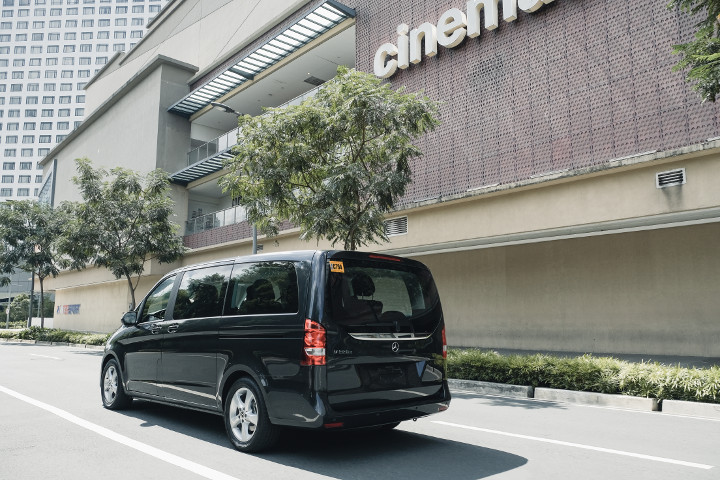 Now, on to the V-Class. Entering the V-Class 220d, I instantly noticed the sliding doors on both sides. They’re electrically operated and can be opened or closed with a push of a button. Inside, the A/C vents also have a sporty turbine design, and the update for 2019 has brought new dials to the instrument cluster. 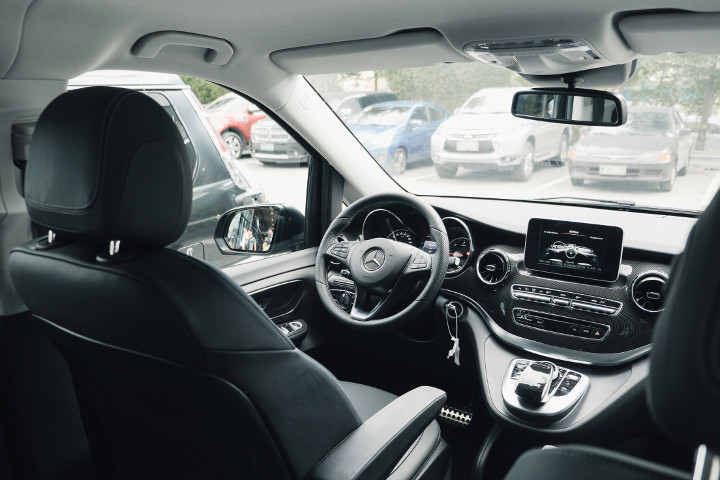 Again, the ride is very smooth. I felt like I was riding on clouds, doing my best not to fall asleep as the V-Class virtually neutralized every bump on EDSA. All the seats are leather-wrapped captain’s chairs, with the two on the second row able to swivel around to face the back row. This also allows for the built-in folding tables in the middle to be shared by those in the back. 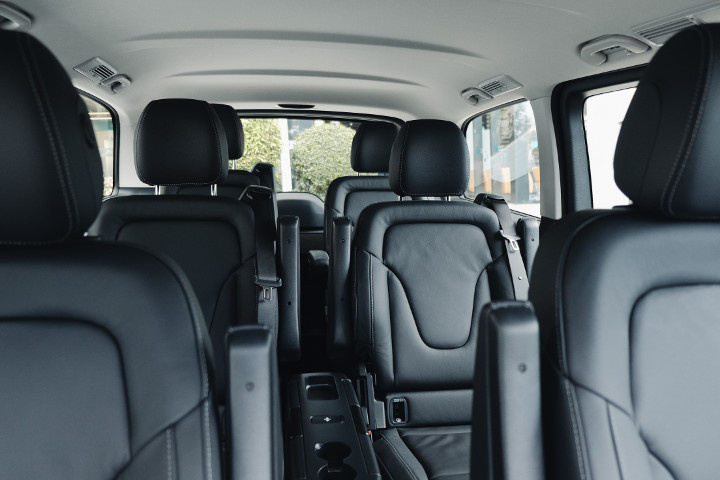 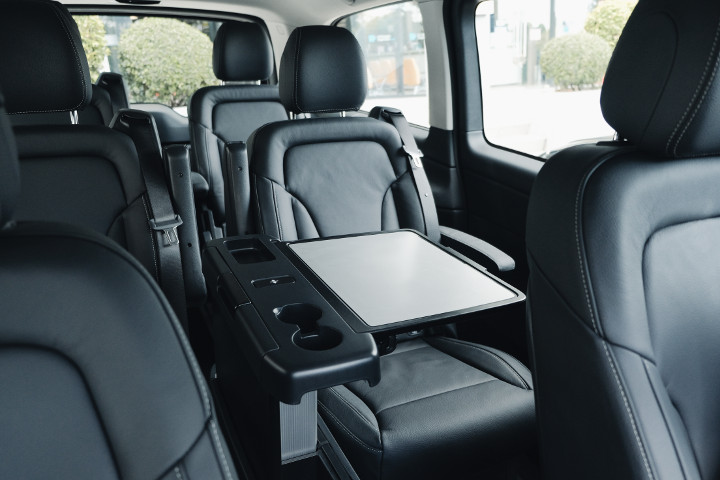 Nevertheless, we still had to move the van slightly forward because some pieces of luggage were just not small enough to fit through the window. It was then that I saw the tailgate, like the sliding doors, could be opened just by pressing a button. Child’s play.

Other features include heat-insulating glass all around, a parcel shelf, semi-automatic Tempmatic A/C, 12V sockets, and multiple cabin airbags. Outside, the 2019 model has a more modern appearance than the previous model did thanks to a redesigned front fascia and 17-inch alloy wheels. 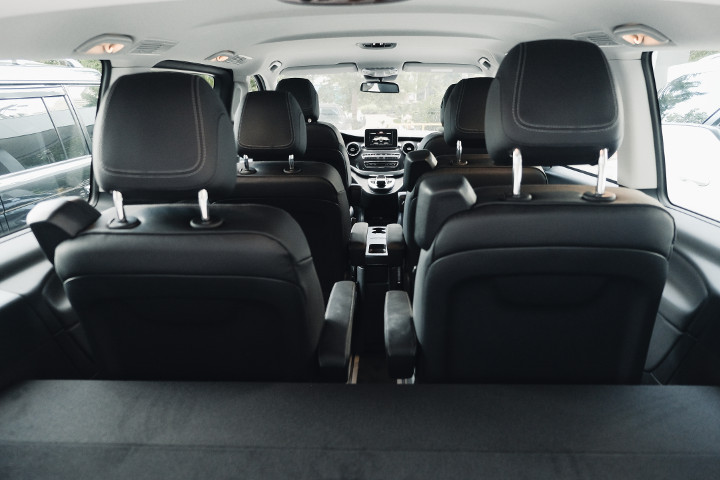 “We wanted our motoring media friends to experience and enjoy the new GLC and new V-Class as passengers, since most of the time they are behind the wheel to do technical reviews,” said Joseph Ayllon, head of PR communications at Auto Nation Group, the local distributor of Mercedes-Benz. “This allowed them to get a feel of the comfortable seats, the impressive amenities, and the quiet cabin of the new GLC and new V-Class, which you will appreciate nowadays given the heavy city traffic.”

Overall, these two vehicles do provide a comfortable refuge from the traffic situation in Metro Manila. I’d say I found the V-Class more comfortable as a backseat passenger’s vehicle, while the GLC 200 could switch between chauffeur- and owner-driven. It looks properly fun to drive. 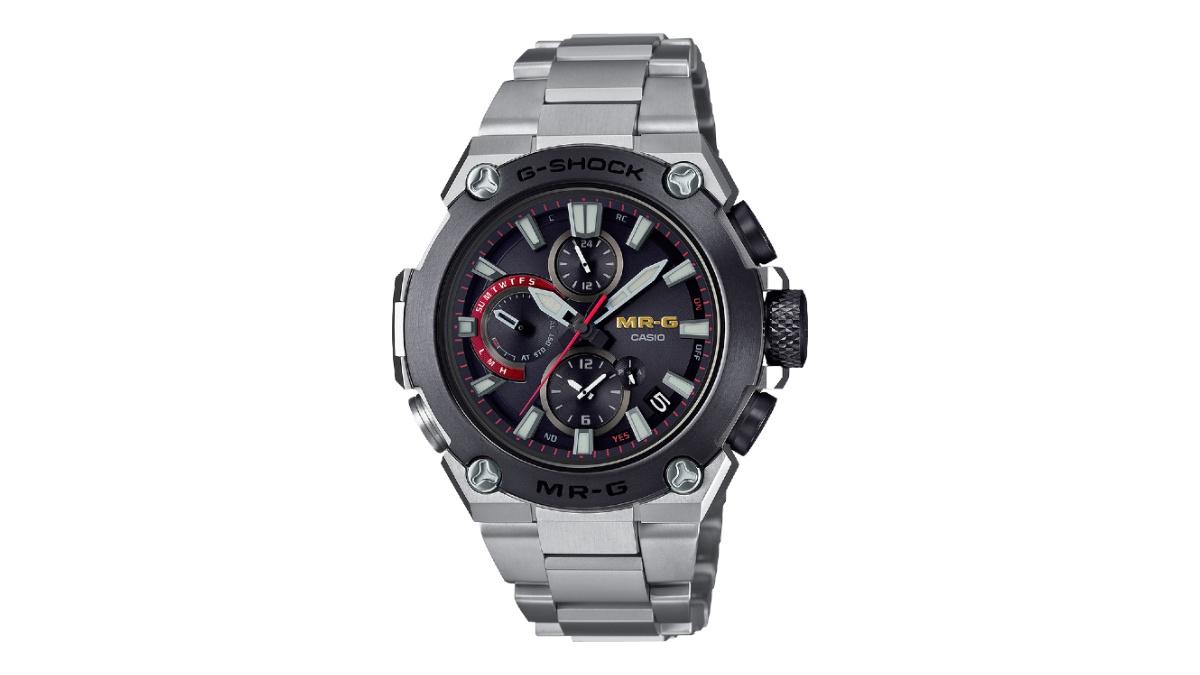 This titanium Casio G-Shock costs over P120,000
View other articles about:
Read the Story →
This article originally appeared on Topgear.com. Minor edits have been made by the TopGear.com.ph editors.
Share:
Retake this Poll
Quiz Results
Share:
Take this Quiz Again
TGP Rating:
/20