"Sharper, crisper and even more exciting"
by Ollie Marriage | Nov 10, 2017
CAR BRANDS IN THIS ARTICLE 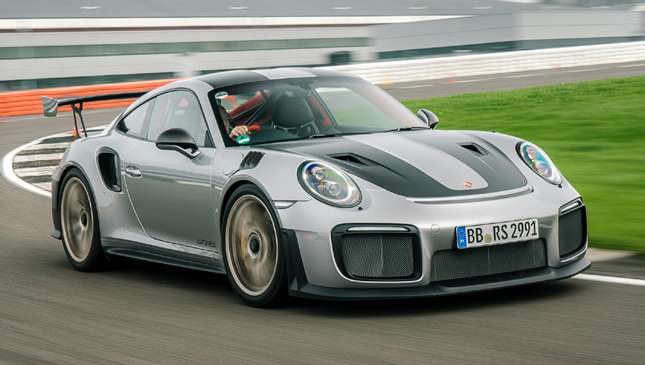 The fastest production car around the Nürburgring, no less…

Indeed. In a weird twist of fate, I was driving the new Porsche 911 GT2 RS at Silverstone on the day of the bombshell.

Five seconds faster than the Lamborghini Huracán Performante, 10 seconds ahead of Porsche’s own 887hp 918 Spyder. Whatever you think of the ‘Ring lap time as a measurement, its integrity, relevance or otherwise, you can’t deny the time tells an impressive story.

How did the GT2 RS feel at Silverstone?

This is the fourth-generation 911 to boast a GT2 derivative. The first was the 993 GT2 back in 1993, a motorsport special of which only 57 were built. But it set the template—a hardcore motorsport-derived 911, but with twin turbos. 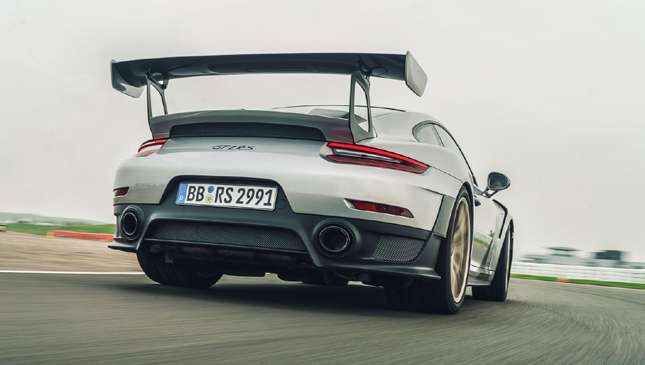 No. As far as the motor goes, it’s more of an upgraded Turbo S. It uses the Turbo’s 3.8-liter engine, not the GT3 RS’s 4.0-liter. So it doesn’t rev to 8,800rpm. Instead 7,200rpm is your lot. Bigger turbos account for most of the extra 118hp over the 572hp Turbo S, although there’s also a water-spray system to cool down inlet temperatures.

I’ve never driven a turbo engine that makes more actual engine noise than this, or sounds better, or is more different to the motor it’s based on. The exhaust valves are right at the end of the pipes, little actuator arms opening and closing the flaps. God.

But I’m getting ahead of myself. The stats: 690hp, 750Nm available from only 2,500rpm, all fed to the rear wheels alone via a heftily reinforced seven-speed PDK transmission. No manual this time, but for once I’m not complaining. I remember the panicky rush of trying to judge clutch, throttle and traction in the lower gears of the old 612hp 997 GT2 RS. Sweaty. 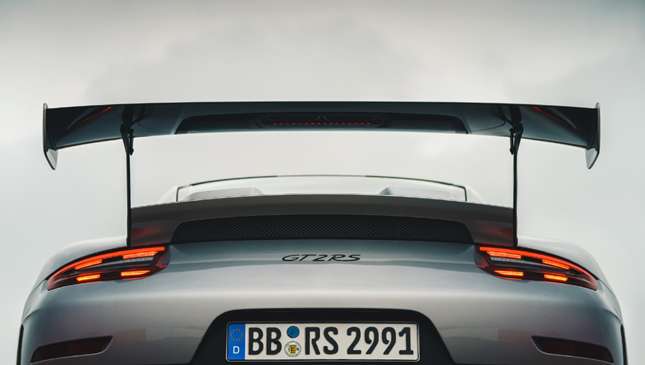 Will there be a standard GT2?

No, this is your lot, and for £207,506 (P14 million). But you can pay more by adding the Weissach Pack. Ready for the geeky bit? For an extra £21,402 (P1.4 million) you receive a host of hardcore upgrades: forged magnesium wheels, the magnesium roof replaced with an even lighter carbon one, a titanium roll cage, carbon anti-roll bars and suspension coupling links, six-point harnesses, the stripes, a massive Porsche logo spelled out atop the rear wing, plaques and logos inside. It saves 30kg and I imagine every buyer will opt for it.

It certainly communicates a motorsport vibe. Just look at it—those huge gulping intakes at the front, the risen hackles on the vents over the front wheels, the hood's Naca ducts that channel air to cool the front brakes, the rear wing (well, the sheer size of it), the plastic windows. It’s not beautiful, but I can’t think of many cars that exude a greater sense of purpose. 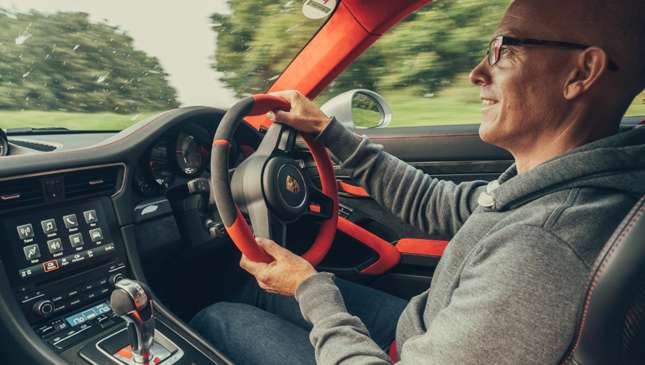 Or are more red inside…

I could put up with most of it, but the steering wheel is a distraction. I attempt to ignore it while I circulate Silverstone. Today’s different layout puts me on to the Hanger Straight at about 70kph. The GT2 RS hits 259kph by the end of it.

The most remarkable thing about the way it accelerates is that it punches past 240kph as readily as it does 129kph. The force is entirely relentless, the noise a deep, bassy chunter, much lower and more guttural than other 911s. But your awareness is colored by the fact the car piles on more speed-per-rev gained than you imagine possible. It’s not so noticeable when you’re flat out on track, using high revs and getting used to the speeds involved. But on the road, on light throttle openings, you have to be very circumspect.

There is no Sport setting for the engine—the only parameters you can alter are the exhaust and stability control—so I was worried about the heavily blown engine not having good pick-up and response. Instead I’m amazed how zingy the throttle feels, how pressure is maintained in the turbos, how the acceleration ramps up toward the top end.

This is new for Porsche—genuinely exciting turbo engines are thin on the ground, the Ferrari 488 among the most notable. However, that comes off second best in comparison to the 458’s naturally aspirated 4.5-liter that preceded it. And I’m afraid we have a similar case here. Amazing though this motor is, I’d rather drive and listen to the GT3 RS’s atmospheric 8,800rpm 4.0-liter—it’s sharper, crisper and even more exciting. 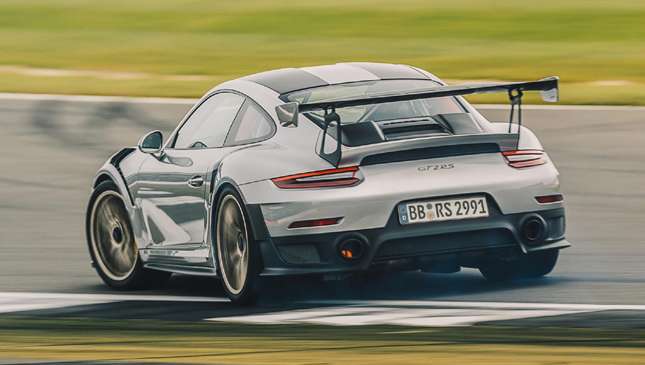 And how’s the handling?

I’d kind of expected the GT2’s chassis to be overwhelmed by the torque. But because the engine’s delivery is so precise, because it so accurately follows what your foot is doing, you quickly find that you have confidence in the car. I hadn’t really expected that.

And then we come to how dexterous the chassis is, because it really is. It’s the clarity of connection between steering and tire that really strikes me. Unsurprisingly, even Michelin’s trackiest Cup 2 tires feel the heat after three or four laps of trying to dispose of 690hp. The compound gets hot, and then you start to lose the handling’s crisp, defined edges. And you accurately feel this through the steering and seat, a little understeer intrudes, turn-in is marginally softer, the traction light flickers more insistently.

I dare to turn it off. And I almost feel comfortable doing so. It moves well around the edges of grip, because small inputs are accurately reflected in the behavior and attitude of the car. Often this isn’t the case—you might have to be on the throttle for a second or so before the turbo comes swinging in, with predictably alarming results, but the GT2 is shot through with an immediacy and purity that makes it easy to get on with. 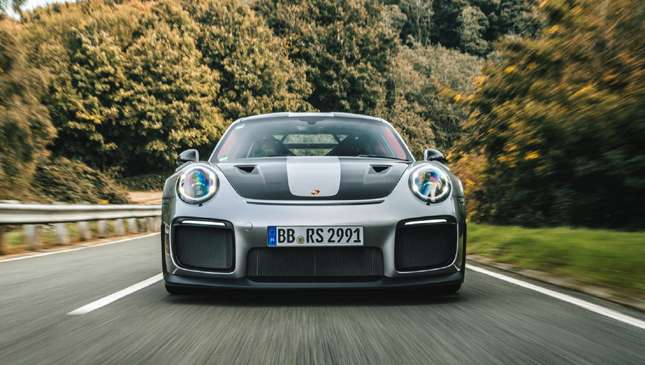 Really? Genuinely easy to get on with?

Well, easy-ish. Despite the 991’s longer wheelbase, more balanced weight distribution and a four-wheel-steering system set-up to increase stability, if you smash the throttle open mid-corner you’d better be on your A-game.

But in a straight line? I know tire technology has come a long way, but the fact that a 650mm-wide total contact patch can contain the rampant effects of 690hp uphill in second gear boggles my mind. We’re at Millbrook test track now, where the GT2 RS has already proved itself astonishingly stable at 241kph. There’s an evil bump on the two-mile circular ‘bowl’ that usually throws cars a foot towards the barriers. Here it’s no more than a blip. Downforce at work.

Then it’s the Alpine-like hill route, where the GT2 RS behaves like a moon shot, firing itself up ridiculous inclines with an energy that suggests the next stop after the crest is the upper atmosphere. And then there’s the brakes—they’re as addictive as the engine, not just the spellbinding stopping power, but the lovely correspondence between pressure applied and retardation felt. 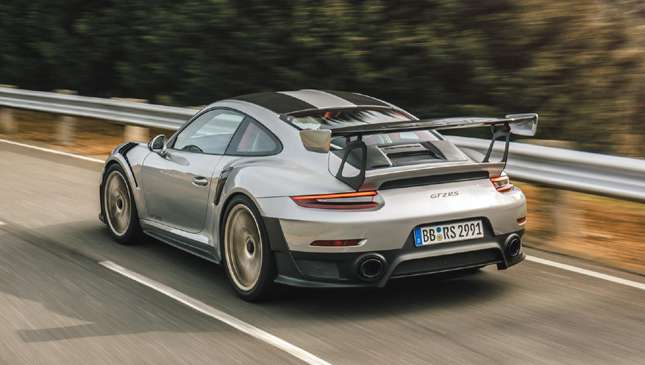 How about on the road?

As long as you keep a beady eye on the speedometer, it’s as drivable as a GT3 RS. Fair amount of tire noise, but you can cure that by dropping a gear or two. Not too many complaints about the fixed-back seat, and it feels tough, robust, fit for purpose.

But it also feels confined. What I said earlier about how the GT2 RS piles speed on? It really, really does. And without any apparent effort. The best you’re going to get is a quick gust of second or third gear.

The Ford GT springs to mind, although that’s a more bespoke creation—you sit lower and it’s arguably an even more intense experience. Ferrari will have a harder 488 out in due course (Speciale?) and there will be an LT version of the McLaren 720S, too.

Being mid-engined and more exotic, all will have a more dramatic feel than the Porsche. But faster, gutsier? I’m not sure. It’s a mighty, mighty thing, the GT2 RS. For me the toughest rival comes from within—the GT3 RS. 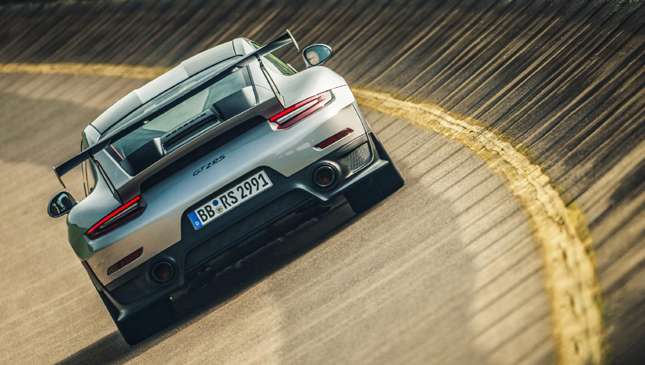 Boil the GT2 RS down for me.

What we have, overall, is a GT2 RS you don’t have to be scared of. It feels like technology has caught up with the concept, that tire, throttle and stability control, plus turbo management have honed (but not tamed) the GT2’s historic wildness.

The result is a sensationally fast car, one that’s also far sharper, more drivable and controllable than it has any right to be. It doesn’t feel electronically managed either, not for a second, but wonderfully mechanical. 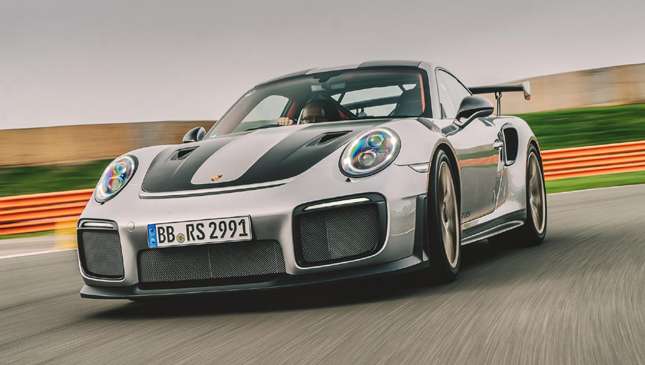 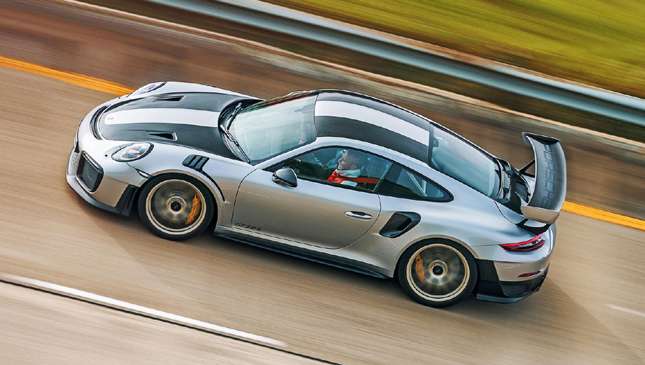 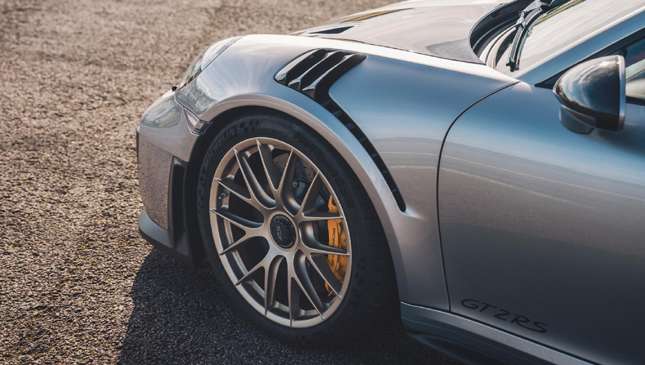 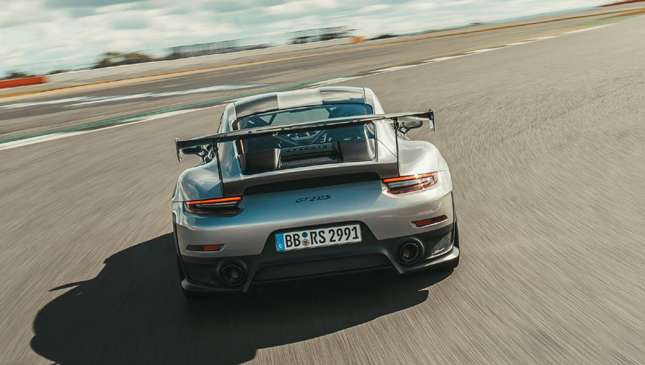 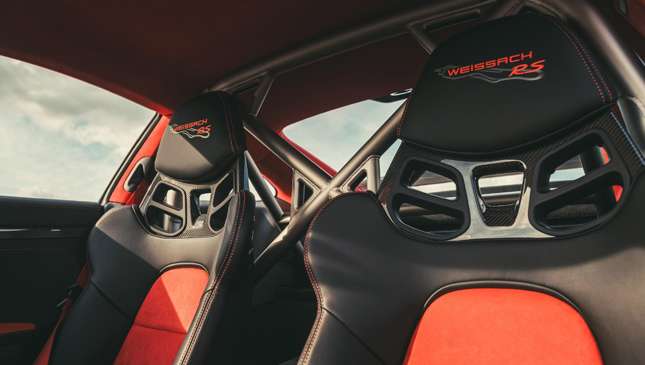 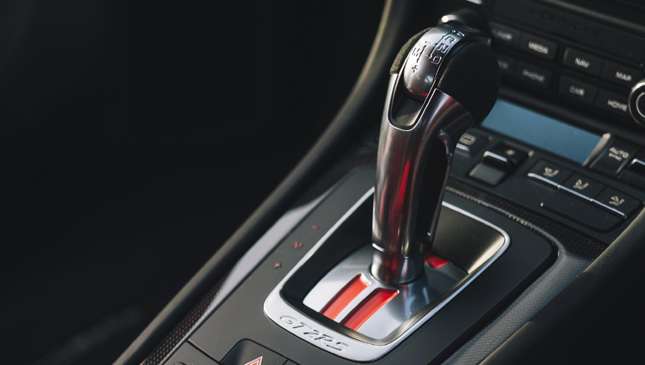 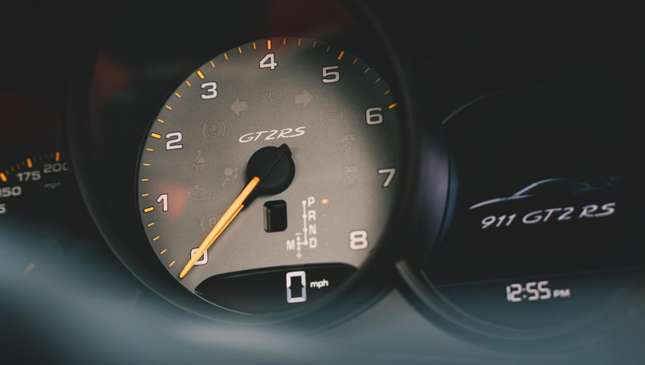 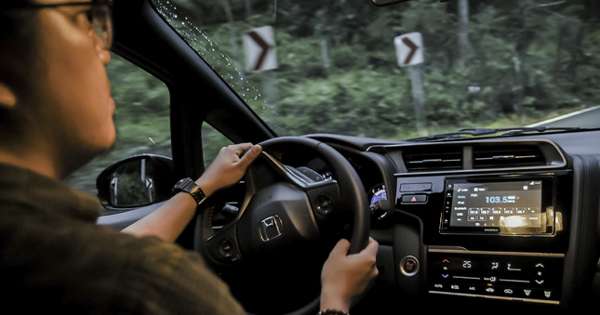