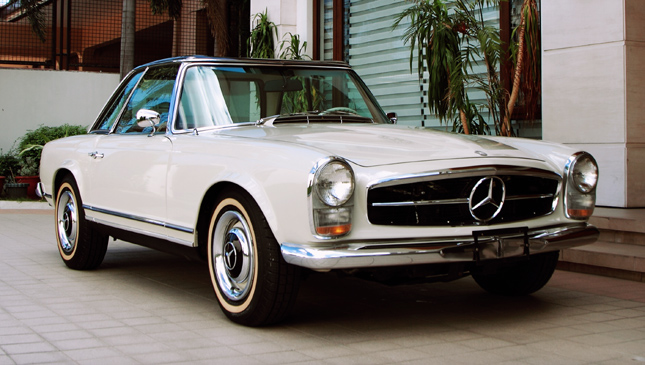 The original Mercedes-Benz SL was a tough act to follow. Based on a pure race car, the 300SL of 1954 had an unmistakable sporting pedi­gree, and became a legend while still in production. The second-generation SL had to be based on a standard road-car platform, so its claim to fame had to be different. That difference was style.

The look chosen by designers Freidrich Geiger, Paul Bracq and Bela Barenyi was similar to the clean, rela­tively unadorned lines of the German carmaker’s sedans. The upright Bosch headlamps and the diminutive horizontal taillights were a common look of the four-door cars. The most distinguishing feature of this second SL generation, also known as the W113, was its concave roof held up by thin pil­lars. The roof soon earned it the fitting 'Pagoda' moniker. 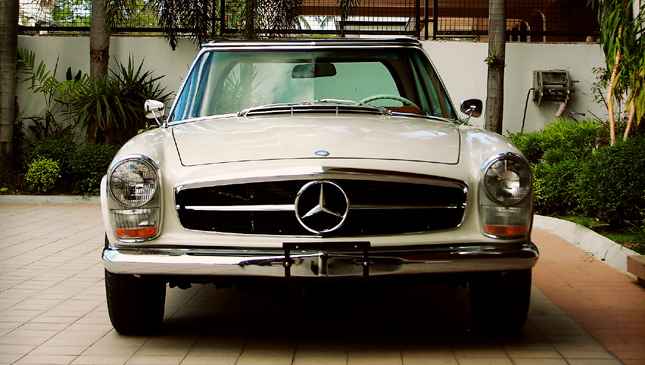 The dimpled roof was a styling gim­mick meant to reduce top speed, but it succeeded in giving the car a unique ap­pearance. Taking a cue from the 190SL--which it also replaced--the 230SL of 1963 was available as a coupe with a re­movable hardtop and a folding soft-top, or as a coupe with just the removable roof. That hardtop required four levers to be released, and two strong adults to lift it away. Many Pagoda owners had a dedicated rack and even a lifter in their garages for the roof. To help com­pensate for the weight, the hood, the door skins, the trunk lid and the tonneau cover were made of lighter aluminum. 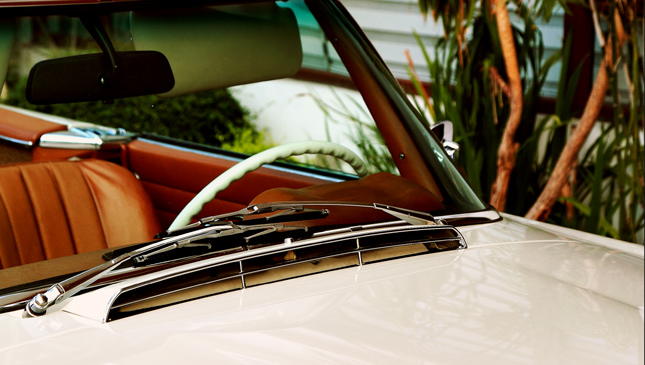 The 230SL was based on the chassis and suspension of the 220SEb sedan. The wheelbase was shortened by 30cm, and the floor plan was stiffened. The 230SL was the first sports car to use a "safety body," pioneered by Barenyi. The rigid passenger cell with front and rear crumple zones (to absorb the force from a collision) is used by practically all modern cars. The inside was also made safer by removing all hard cor­ners and edges, resulting in a 'rounded' interior.

Powering the SL was a 2.3-liter in-line-six good for 150hp and 196Nm. This engine was mated to a four-speed manual or four-speed automatic transmission. As with many Mercedes-Benz models, the Pagoda received engine upgrades throughout its eight-year production cycle. In 1966, the 250SL with a new 2.5-liter in-line-six was introduced. It still made 150hp, but torque was bumped up to 216Nm. Rear disc brakes were fitted, as well as a larger fuel tank. Then there was the fair-weather-friend­ly California Coupe with the soft-top well replaced by a small rear bench, making the car a 2+2. 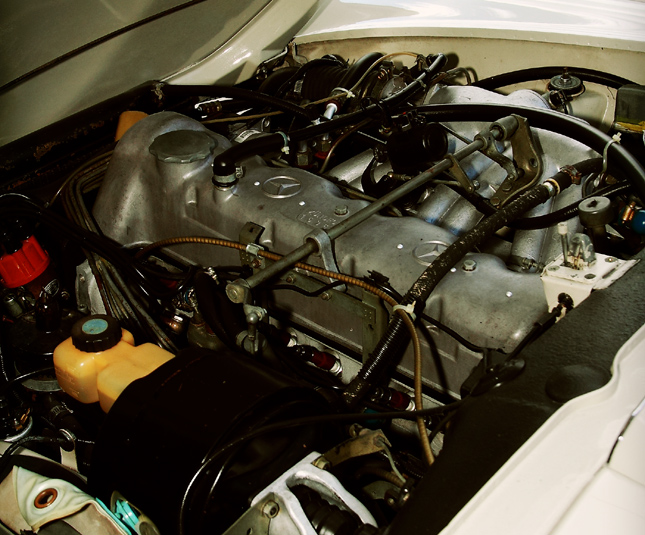 The 280SL was launched in 1967. Its 2.8-liter in-line-six produced 170hp and 244Nm, giving it more power to deliver on its sporty promise. The only external differences were the badges and the hub caps. With it, the W113 generation ended its production run in 1971 with 48,912 units sold.

The SL was, of course, a desirable model when it was new. Celebrity own­ers included Steve McQueen, Juan Manuel Fangio, Julio Iglesias, Maurice Gibb and Burt Reynolds. John Lennon’s blue 230SL was offered for sale at close to half-a-million dollars. 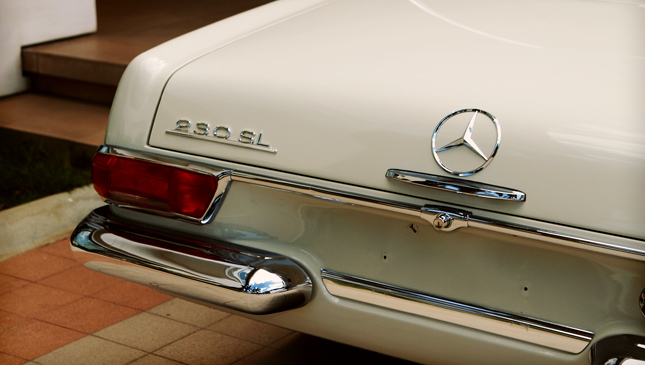 In addition, the SL starred with Audrey Hepburn in Two For The Road; with Warren Beatty, Julie Christie and Goldie Hawn in Shampoo; and with Gregory Peck and Sophia Loren in the spy thriller Arabesque. Its distinctive lines made it a hit at TV and movie sets in the ’60s and the ’70s. Recent productions like Mad Men, Tin­ker, Tailor, Soldier, Spy and Angelina Jolie’s Life Or Something Like It have also featured the SL. Its most prominent movie appearance, however, is in 1994’s Intersection. In the movie, Richard Gere is an architect unhappily married to Sharon Stone. He begins an affair with Lolita Davidovich. While ponder­ing his life, Gere drives fast in his 280SL on a remote highway. Just as he decides what to do, the car is involved in a vio­lent crash. 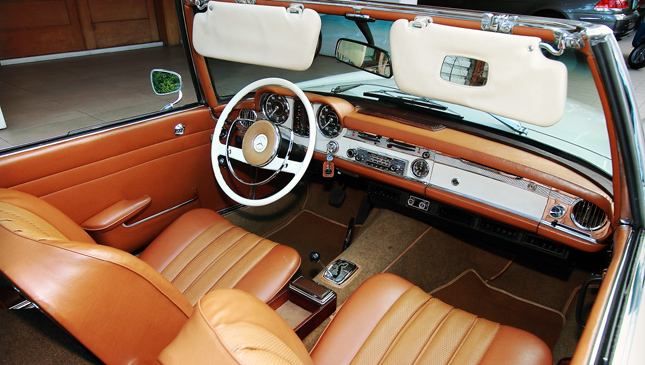 In the Philippines, the W113 was nicknamed 'Mr. Slim' due to its appear­ance in a cigarette ad of the same name in the '70s. It is one of the most popular Mercedes-Benz sports cars among col­lectors. Last year, Mercedes-Benz Club Philippines organized a fun run just for Pagoda owners. Over a dozen cars attended the event.

The fine 230SL featured here was originally imported into Japan, driven sparingly, and then sold to a buyer in the Philippines. The current owner is a car assembler in his own right--he builds armored vehicles. But despite his company’s ability to take apart a car, fit it with armor, and put it back together such that its outer appearance is un­changed, he is hesitant to undertake a restoration project purely for pleasure. The availability of this nearly pristine SL was an opportunity he just couldn’t resist. The only modification to the car so far is the set of white-sidewall tires. He mainly drives the sports car around town, on days when he expects little traffic. It’s a vehicle he enjoys driving with his wife. 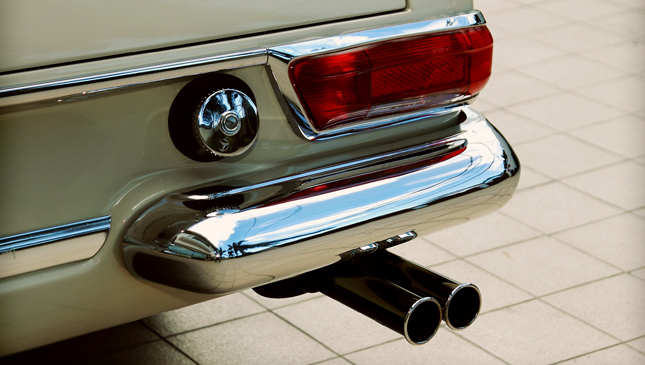 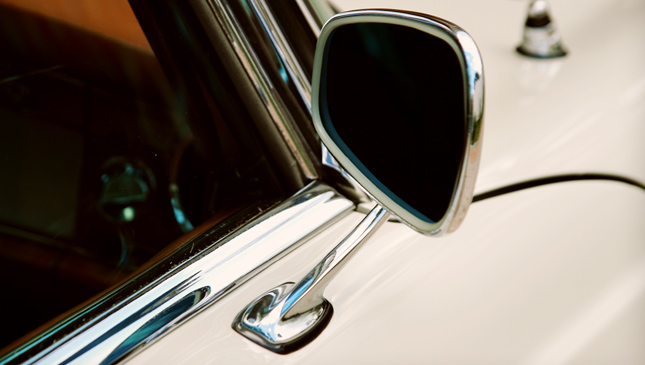 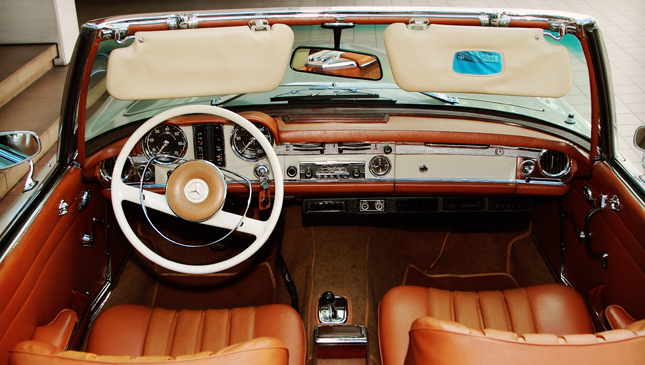 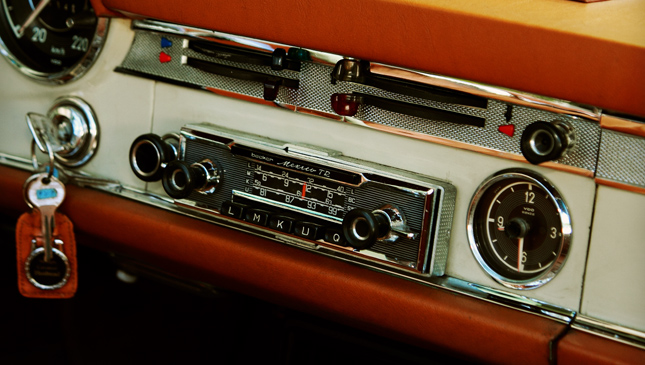 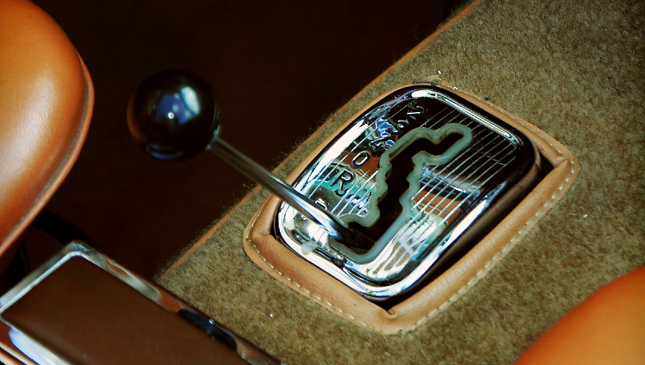 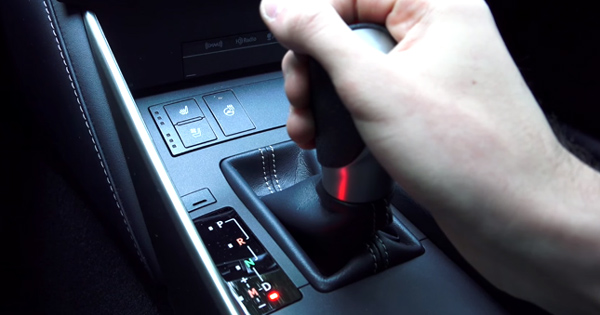 The best of YouTube: 5 things you shouldn't do with an automatic transmission
View other articles about:
Read the Story →
This article originally appeared on Topgear.com. Minor edits have been made by the TopGear.com.ph editors.
Share:
Retake this Poll
Quiz Results
Share:
Take this Quiz Again
TGP Rating:
/20