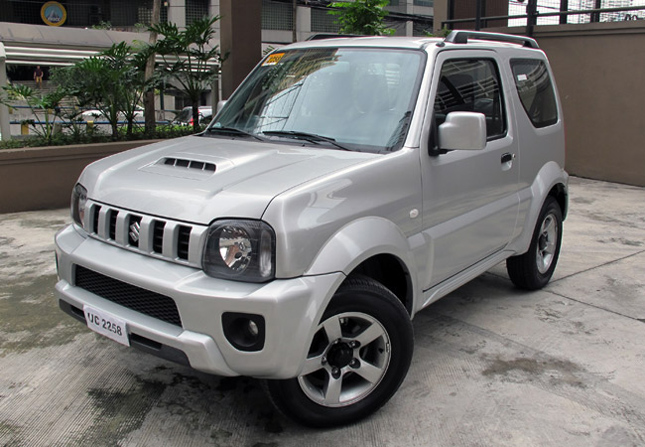 Largely thanks to environmental awareness, SUVs nowadays have shrunk significantly. Gone are the days when the Patrol and the Pajero ruled the road. In their place are their modern, tiny counterparts--designed for individuals who are mindful of their carbon footprint but also fond of the ability to leave the pavement every now and then.

You have the likes of the Honda HR-V and the Chevrolet Trax, both classified as subcompact crossovers. A tad smaller than these is the Ford EcoSport. They’re comfortable, versatile and somewhat sporty. But they offer little in the way of 4x4 driving. They’re often called soft-roaders, a derogatory description that indicates the fact they’re meant mostly for city use. Plus, they all look so feminine, understandable since the main target market for these small crossovers is the active mom. 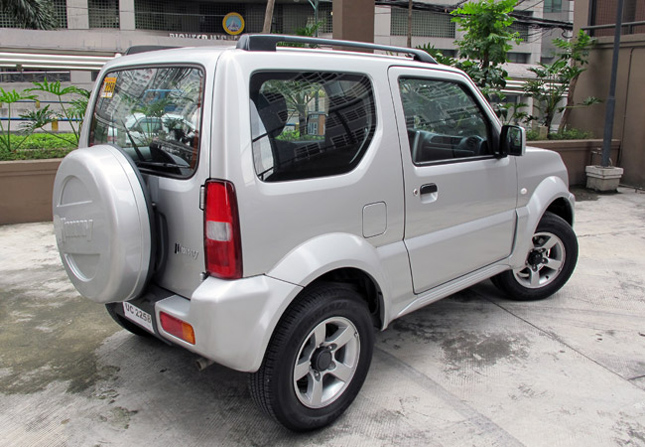 And then there’s the long-running third-generation Suzuki Jimny, which you may know to be one of my dream rides. Launched globally in 1998, this vehicle is now 17 years old, only periodically undergoing cosmetic makeovers and minor mechanical tweaking. This fact doesn’t faze me at all as a prospective buyer. To me, the Jimny is like the soon-to-be-retired Land Rover Defender. It’s one of those iconic models that stand the test of time. Looking and feeling dated are part of its charm. And I wouldn’t have it any other way.

I fell in love with the Jimny’s boxy styling the first time I laid eyes on it. I told myself then that I’d have to test-drive one someday. The Jimny boasts a manly exterior design. No pretensions whatsoever. Well, okay, there’s one concession to nonfunctional vanity. The hood scoop you see up front doesn’t really serve any purpose, other than to make the car look better. That’s because the Jimny’s 1.3-liter four-cylinder gasoline engine is naturally aspirated. 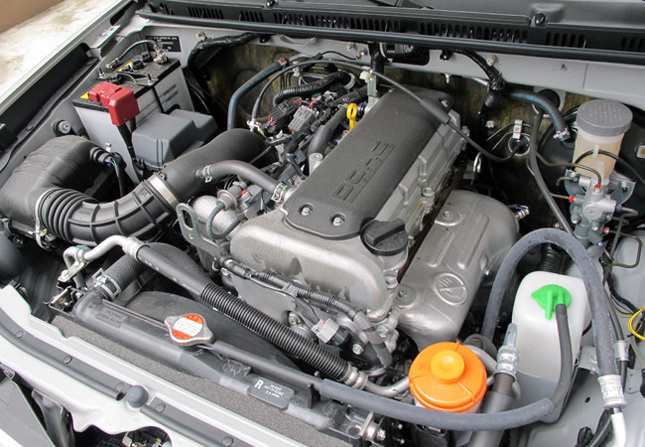 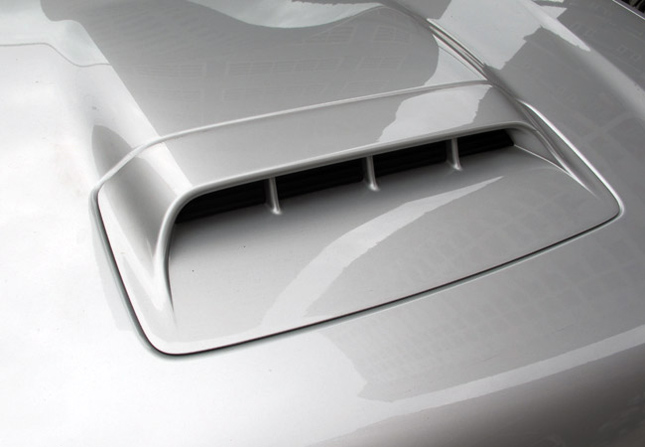 Nevertheless, the standby hood scoop isn’t merely for aesthetics--it’s also for when you decide to turbocharge your 80hp and 110Nm powerplant. Which I suggest you do, not only because it will do wonders for your forward thrust, but also because it’s weird driving around with a hood scoop that doesn’t really suck in air.

This three-door SUV is small. As in really small. At 3,645mm long, it’s 600mm shorter than the already undersized EcoSport. If you’re wondering how it’s possible to squeeze an SUV into a frugal volume this pint-sized, it’s because all four wheels are flushed to the corners, almost eliminating any space for a front or rear overhang. This results in a toylike ride--like a tall go-kart, if you can imagine that. 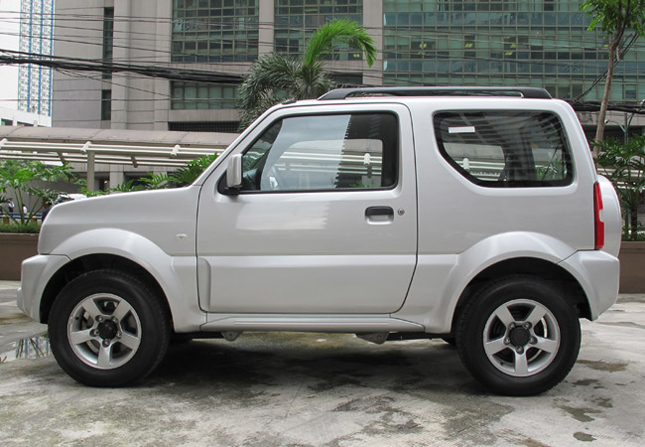 Because this is an uncomplicated tiny SUV from the late ’90s, it has a few luxuries you will appreciate when you hit the boondocks. There’s a pair of fog lamps in front and a pair of rails on the roof. There’s also a tow hitch attached to its rear, as well as a full-face tire cover (as opposed to the previously disc-like accessory). Both the tow hitch and the fog lamps aren’t indicated on the product spec sheet, but they’re there on our demo unit. My guess is that they’re a pair of add-ons thrown in to convince the customer to fork over his hard-earned cash for something that is going to be two decades old in a few years. Good value, if that’s the case. 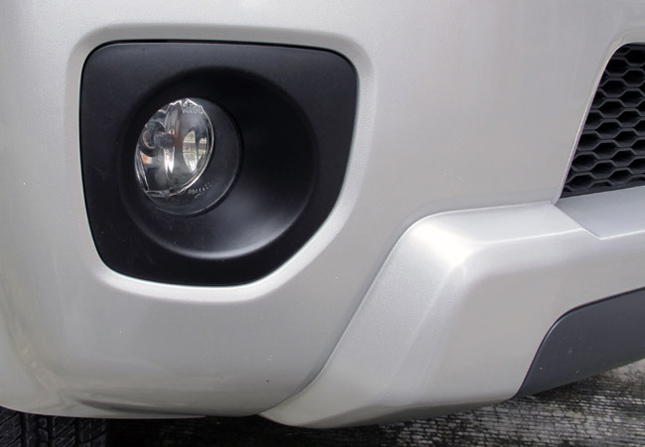 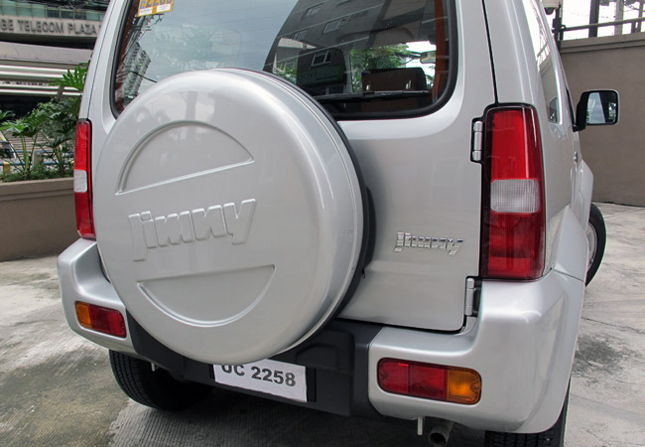 The Jimny has seats for four passengers, and because it only has doors for the front occupants, the rear perches may be accessed by pushing the front seats forward. Ingress into the rear part of the car looks tricky, but not really, apparently, because my boss rode with me one evening going to an industry event. She didn’t seem to have too much trouble contorting her scrawny body just to get to her seat at the back. And her burly bodyguard, who took the front passenger seat, didn’t seem to suffer from claustrophobia.

The first thing you notice once you’ve plopped your tush into the driver seat is the overall economy of the interior. And I mean that in a positive way. I’m the type who doesn’t mind inexpensive stuff in the cabin as long as I can see the savings in my bottom line, which is the selling price. 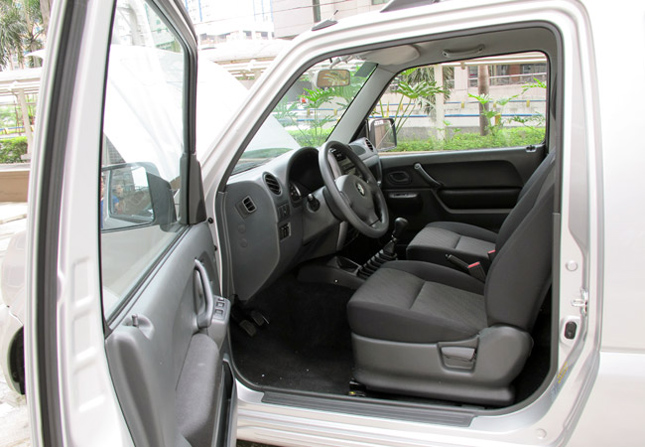 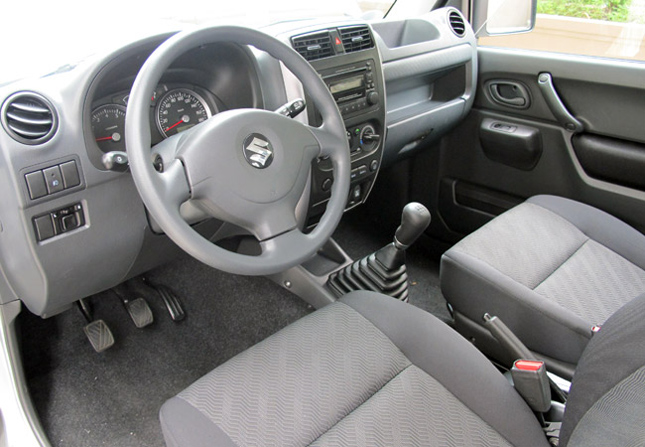 The seats are fabric. The steering wheel is made of flimsy plastic that reminds me of Toys ’R’ Us. The instrument cluster is a two-gauge analog affair. The CD head unit doesn’t have Bluetooth. The center console is a straight-up location for air-conditioning vents and controls. The map light feels like it came from the discount bin of CD-R King. There are several cubbyholes here and there.

And I’m not turned off by these at all. In fact, I’m glad the Jimny is this spartan. I would hate for it to have all the fancy tech goodies inside when every other attribute of the vehicle feels delightfully crude. Because that would be the equivalent of having Chuck Norris dress up like a fashionable marketing executive. Not gonna happen. 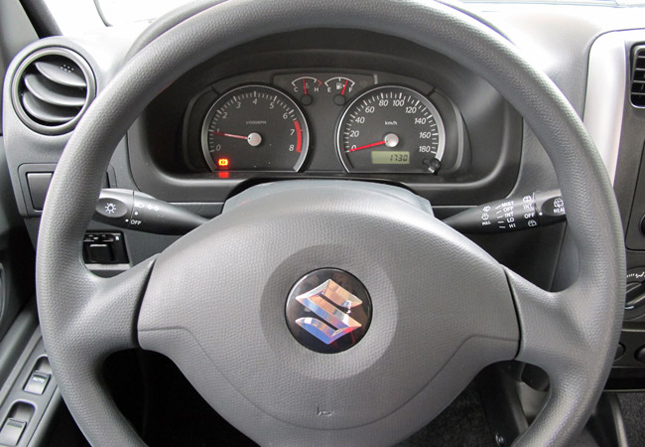 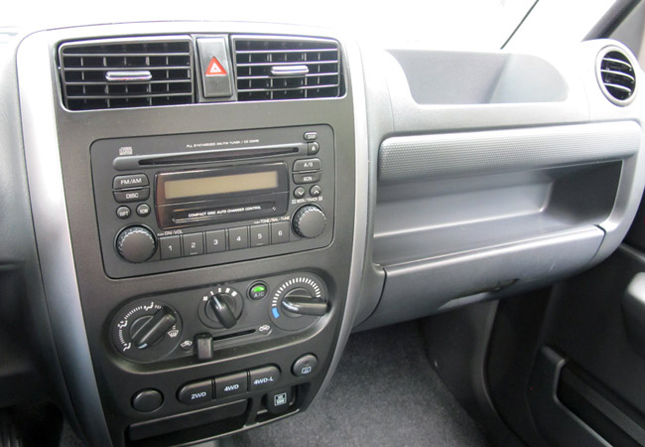 The best part is that I clearly see where all the cost-cutting went. Our manual-transmission JLX variant is priced at just P790,000. Less than P800,000! For the kind of motoring concept it’s peddling, the Jimny promises bang for the buck. Two other variants sandwich the JLX MT: the JX MT (P738,000) and the JLX AT (P845,000). I honestly think our demo unit, a JLX MT, is the best choice among the three.

Can the small engine pull a car of this size? Yes, it can, with more to spare. The theme of austerity is evident in the engine sound, making you wonder at first if you’ve hopped inside a diesel unit. But under the prodding of your foot, the motor responds eagerly, carrying the Jimny forward even with the shifter two gears too high. The shift knob rests on a semi-tall stick, and once you hold it, you get instant confirmation that stick is still the way to go. 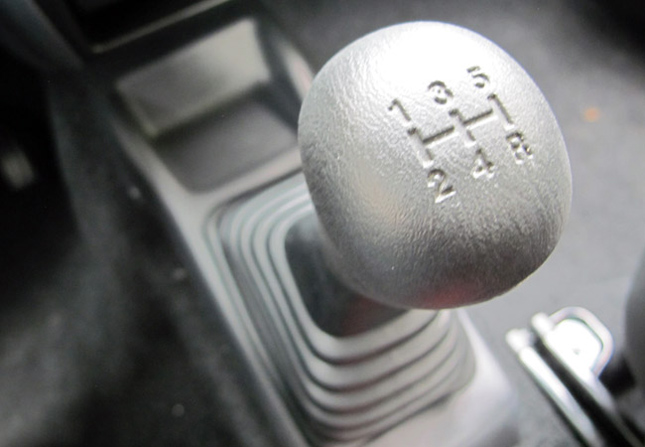 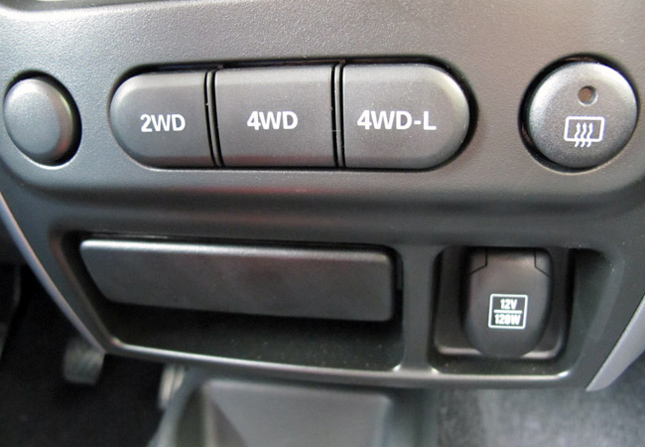 Push buttons for 4WD operation will come in handy for those off-road excursions. The Jimny, in spite of its parsimonious size, is said to be a legendary “mountain goat.” As in it will climb anything.

And because the Jimny is a budget vehicle, the list of safety equipment on offer is limited. No airbags or ABS, but at least there are side-impact beams.When I had the Jimny recently, it was the second time I’d driven the same unit in less than a year. I’d sampled the plaything last year, a personal request that Suzuki Philippines was all too happy to indulge.

I noticed that a few thousand kilometers had been added to the odometer, but the vehicle’s look, feel and even smell had been impressively maintained. My one complaint is that I sniffed foul odor coming from the A/C vent a few times. My theory is that the A/C recirculation function of the test unit was faulty, allowing air from the outside to enter the cabin. Other than that, the Jimny is a dream. 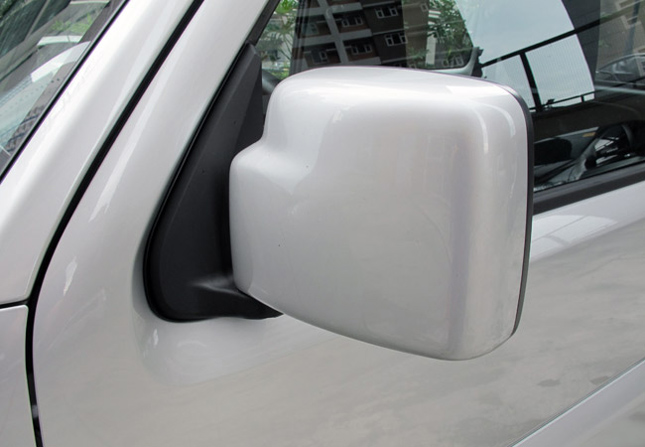 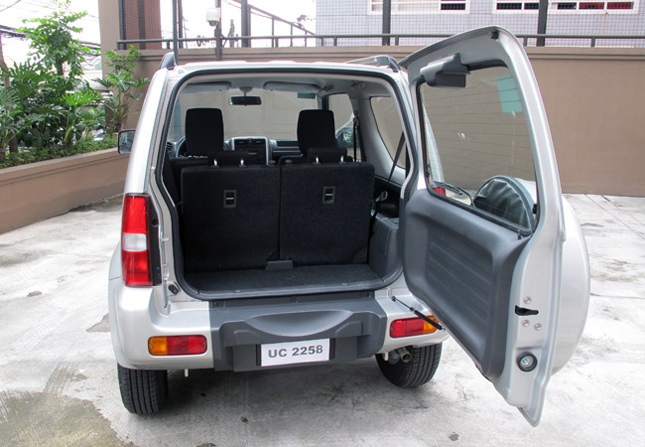 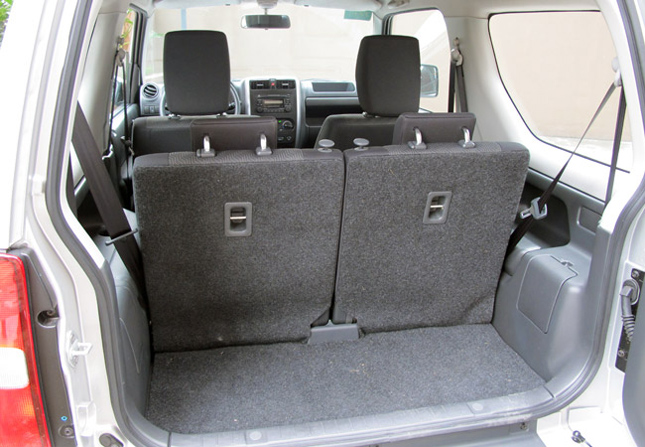 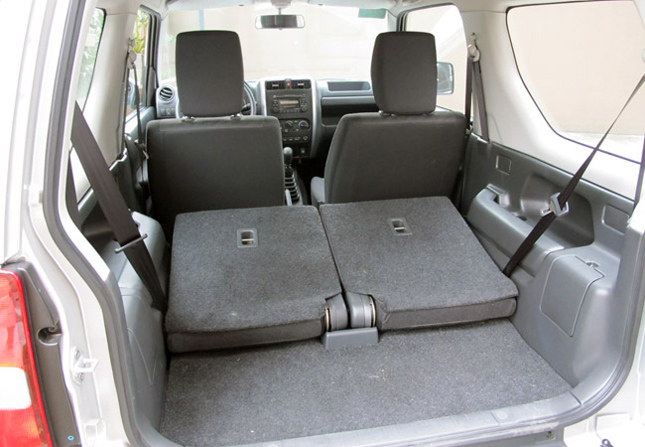 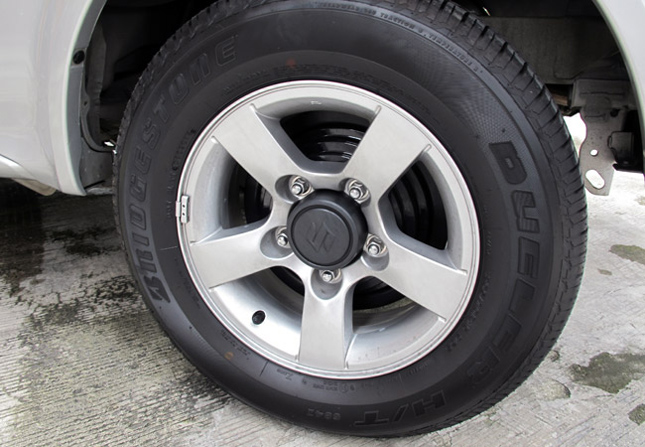 NOTE: This article originally appeared in our magazine's September 2015 issue. 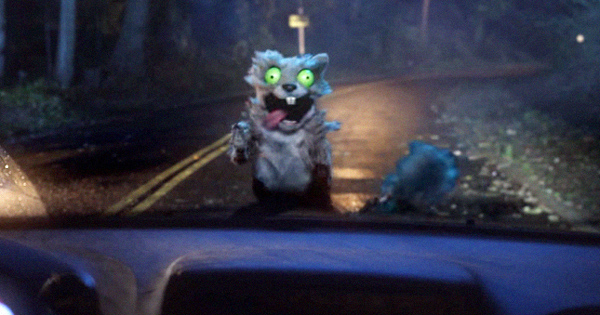 Video: What if the animals you'd run over came back to life and sang to you?
View other articles about:
Read the Story →
This article originally appeared on Topgear.com. Minor edits have been made by the TopGear.com.ph editors.
Share:
Retake this Poll
Quiz Results
Share:
Take this Quiz Again
TGP Rating:
/20