A day in the life of The Stig 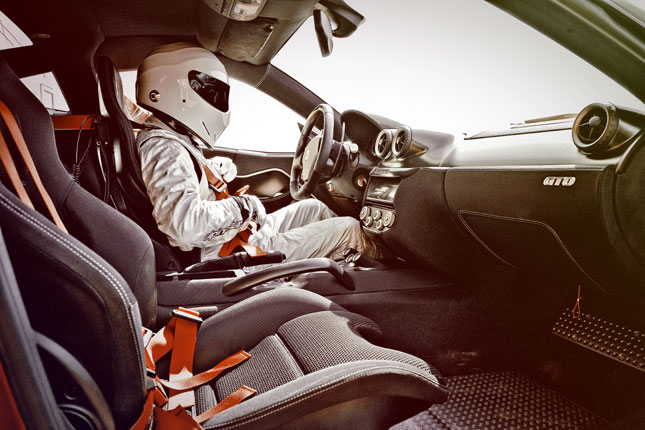 We know very little about Top Gear’s tame racing driver. There have been two books written about him, both completely untrue. Even the official one. We know he is between 5'7" and 6'2", and between 60kg and 95kg.

He speaks with a French accent. But he speaks French badly. We know that he isn’t David Beckham. He hates football. And ducks. He knows a lot about ducks. But he still hates them.

We would be hard-pressed to claim any authoritative knowledge of The Stig, but from CCTV footage and eyewitness accounts, we have pieced together a typical day in the life of the surly white-clad enigma. 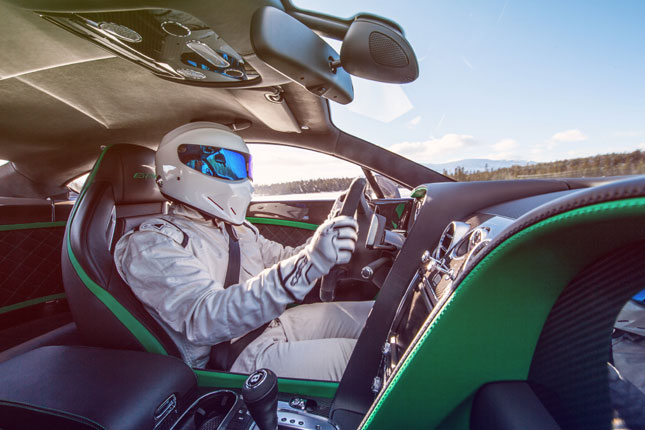 6:30am: A black Range Rover, registration plates taped over, pulls up to the office at the Dunsford Aerodrome. The man behind the wheel wears a familiar white Simpson Bandit helmet. The guard at the gate checks his gate pass before letting him in. A necessary security measure since that German driver with the pointy chin snuck onto the set in disguise a few years ago.

6:33am: The helmeted figure walks into his dressing room carrying a battered duffel bag.

6:47am: A production assistant brings a tray of curry turnovers, a Thermos full of coffee, and a newspaper. "Shooting begins in 30 minutes," he says cheerfully, eyes averted. His hands are shaking as he sets the tray down gingerly on the table.

6:48am: The tray goes clattering out the window, the production assistant running after it. The Stig doesn’t eat curry turnovers. 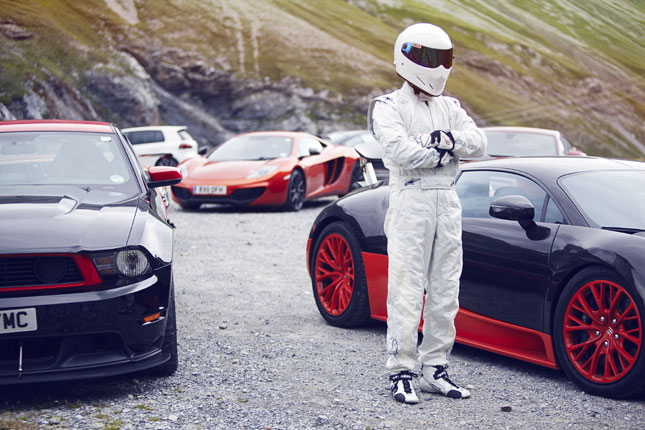 7:00am: The Stig performs his morning constitutional. This consists of standing in a corner and staring intently at all passersby.

7:15am: The Stig walks out into the drizzling rain. There is a truck waiting for him on the tarmac, spluttering away in the cold. A junior assistant walks across his path before he’s pulled aside by a nervous coworker. The last person to get between The Stig and his car ended up with a missing toe. Even the Daily Mail thought that was a joke.

7:16am: The Stig climbs into the truck, a yellow Ford gussied up like a Max Power centerfold. ‘Superstar’ by the Carpenters is playing on the radio. The Stig turns it off. Then pulls the fuse, for good measure.

7:17am: The Stig pedals the truck around the “track” laid out in white paint on the runway. Small right, small left, big left, Chicago! Through the Follow-Through, then Bentley, Bacharach, Gambon, done! A very undramatic performance, as so many others over the years. 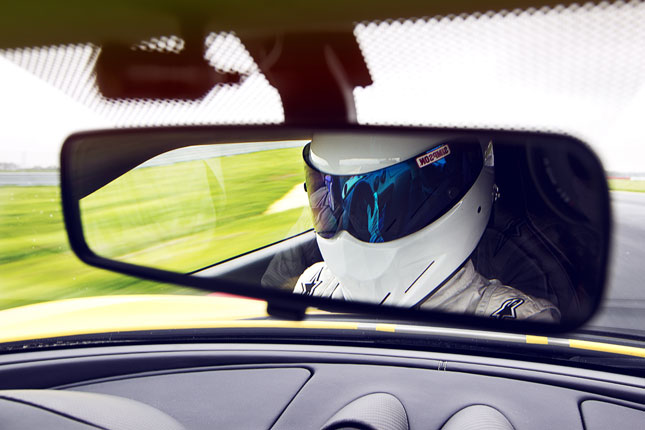 7:30am: After several laps, a producer runs up and asks The Stig to do it all again, only "a little more sideways, please." The Stig is not amused. He obliges with long, lurid slides around the Hammerhead.

8:30am: The Stig’s cohosts drop by for a chat. The one that reminds him of his aunt is talking about the weather. The excitable one is chattering away about Yorkshire. Whether the place or the pudding, it is hard to tell. The tall one in the shoddy coat gives The Stig a pat on the head. "Good dog," he says. Someday, The Stig will punch him in the face. But not today.

9:00am: One of the cohosts has had an accident out on the runway. The Stig drives out with a shovel and a bag of kitty litter to clean it up.

9:30am: The camera crew films the tall one puttering around the track slowly in an expensive car.

10:30am: The producer asks The Stig to go out in the same car. Only "a little more sideways, please." The Stig is not amused. But he obliges.

12:00pm: Lunch break. The Stig walks into the broom closet for a nap. He sleeps standing up. One of the producers hangs a "Do Not Disturb" sign on the knob.

1:43pm: He wraps an early birthday present for Daniel Ricciardo. A lump of coal and a dead parakeet. 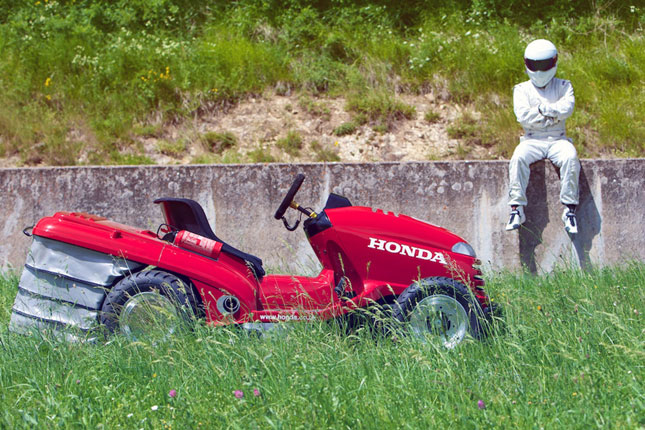 2:07pm: Some visitors come by for the guided tour. The Stig drives them around the parking lot in a golf cart, then ditches them in a hedge off the back lot. The Stig is slightly amused.

3:20pm: Briefing for next week’s challenge around a blackboard. Something to do with caravans. The Stig falls asleep halfway through. Nobody notices.

4:45pm: Preparing for the last shoot of the day, The Stig passes by the makeup department to have his helmet waxed.

4:52pm: The Stig leaves a bag full of used condoms inside his cohosts' dressing room.

5:15pm: Filming. "A little more sideways, please." The Stig is not amused.

5:50pm: Filming done. The Stig gets back into the black Ranger Rover, wearing a Hawaiian shirt over his white overalls. Nicked from a cohost’s closet, of course. The shirt is later found stuffed in a petrol-station loo. 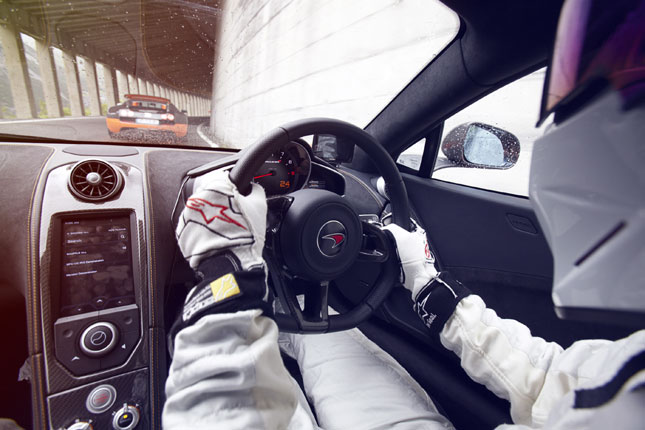 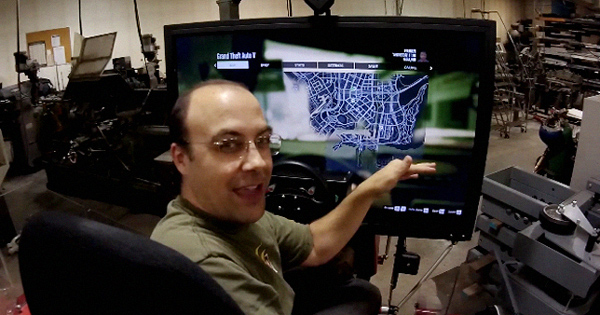 Video: We found a cool way to get rid of post-traffic stress and anxiety
View other articles about:
Recommended Videos
Read the Story →
This article originally appeared on Topgear.com. Minor edits have been made by the TopGear.com.ph editors.
Share:
Retake this Poll
Quiz Results
Share:
Take this Quiz Again
TGP Rating:
/20