This maxi-scooter is now gaining traction in PH market
by Raymond Figuerres | Dec 5, 2018
MOTORCYCLE BRANDS IN THIS ARTICLE

Having lived and worked in the city for more than half my life, I like to give in to the lure of adventurous trips to rural areas whenever there’s an opportunity. The idyllic countryside is where I grew up, and it beckons often.

That was how I came to want an adventure bike. I found myself walking into showrooms for bike fittings, then doing a few test rides courtesy of friends who were willing to lend or planning to sell their bikes.

Admittedly, I was instantly infatuated with the Honda Africa Twin adventure bike, but within a few minutes, reality set in: I struggled to balance it because of its tall seat and top-heavy handling. There was also its almost-P1-million price tag.

To cut the story short, I instead settled for the Honda X-ADV. Let’s see if, like its big brother, the X-ADV deserves the ‘adventure bike’ tag. 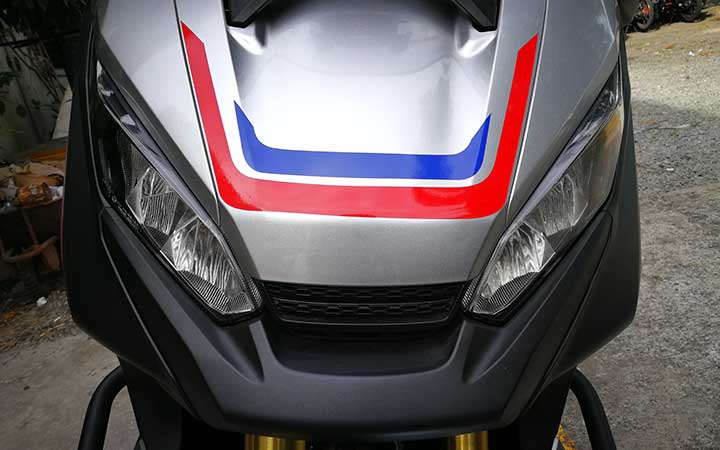 There’s no doubt the X-ADV still has the looks of a scooter. It may be as tall and wide as an adventure bike, but it’s got smaller tires and wheels. You can easily ride it by stepping through it like on a scooter. And if you’re flexible, you can mount it by throwing your legs over the tall seat. The five-position adjustable windscreen is useful in keeping turbulence away from the rider’s chest at speed, and the wide handlebars make for an upright and broad riding posture. The floorboards and the large under-seat storage are solid traits of a scooter.

What makes this Honda different from regular scooters is the tall ground clearance highlighted by the aluminum skid plate and the all-terrain tires mounted on spoked wheels. The Italian designers intended for it to do light off-roading, and it looks like it’s up to the challenge.

The angular lines and the bluish tint on the LED emitters give the X-ADV a futuristic look—one you can even describe as robotic, as a fuel-station attendant has opined. 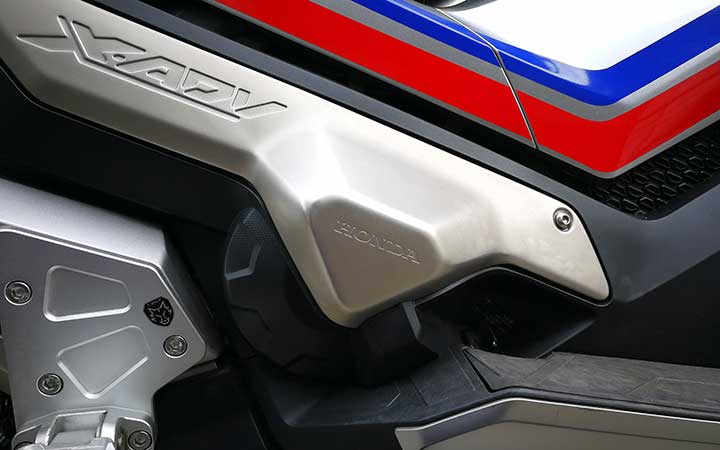 The 32.3-inch seat height might seem manageable for someone who stands 5’8” like I do, but the wide footboards make it harder to straddle, especially with crash bars installed. The seat is firm and comfortably spacious, and the cover material offers just the right amount of friction. If you’re used to seats, throwing your leg over the X-ADV’s wide and tall saddle will take some practice before you get the hang of it.

The pillion seat is equally cozy, but the passenger will likely notice that he’s positioned higher, giving him a clear view of the speedometer. I always end up having to calm down a passenger every time I push the needle to the redline. 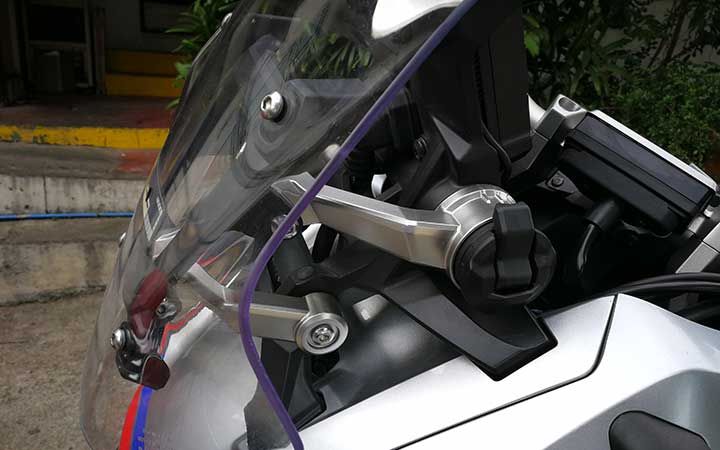 It’s easy to imagine that this 750cc parallel-twin engine is half of an SOHC Honda Jazz powerplant. It revs smoothly and sounds like a V-twin with its 270-degree firing order. The PGM-FI biases the power delivery at the low to the middle part of the rev range. This brings us to the brilliantly paired gear ratios selected automatically by the Honda dual-clutch transmission.

In my opinion, this is the future of motorcycle gearboxes. It gives you the ease of a twist-and-go system, with the control of a manually selectable gearbox. Its M mode allows you to choose gears manually without engaging the clutch. In D or S mode, the electronics select gears based on programmed profiles. D mode shifts to the taller gear quickly for economical, idyllic rides. Meanwhile, there are three levels in S mode that vary the response to throttle input. When you switch to a higher level, it delays upshifts higher on the engine revs.

The system finds the proper gear all the time and uses engine braking intuitively. With the X-ADV, it’s time to say goodbye to exhaustive left-hand/left-foot movements when filtering in traffic. 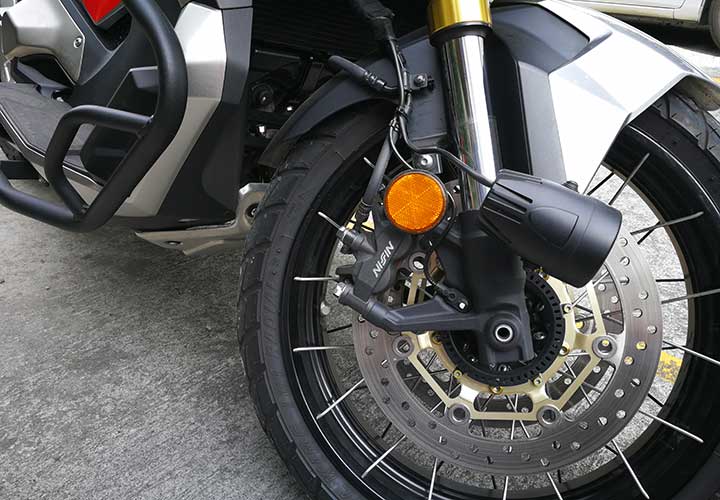 The long wheelbase from the twin Pro-Link swing arms  this scooter stable even on the twisties. The wide tires (17 inches up front, 15 inches in the rear) make it surefooted on slow turns. The tapered handlebars with plastic handguards are borrowed from the Africa Twin. And with two-channel ABS, it’s no surprise that the 230kg X-ADV stops just as well.

The adjustable upside-down forks was a bit soft for my taste in the standard factory setting. I’ve adjusted them to the stiffest level, but now the scooter bottoms down every time I ride too aggressively. Maybe I need to be gentler on this beast.

The rear shocks are adjustable for preload, although I found the sag to be just right, front and back. The X-ADV has off-road aspirations, but I doubt that I will ever take it beyond a packed dirt trail. I’ve tackled a few gravel roads and sandy trails, but I could comfortably take them only at slower speeds. 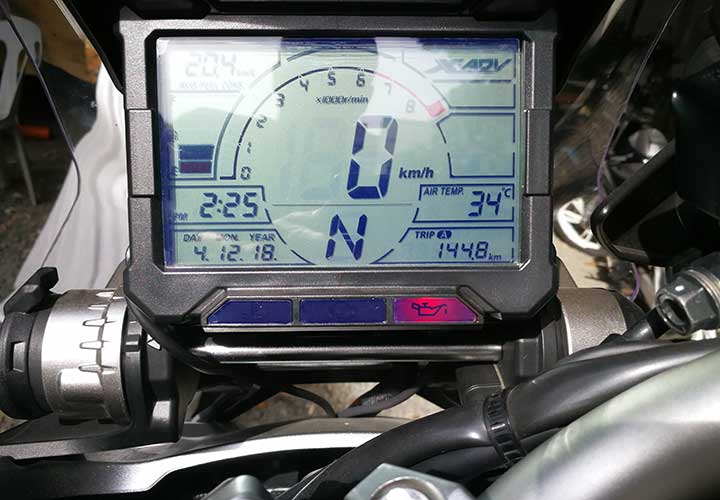 Security and convenience are unmatched with the Honda Smart Key system. You can just walk up to the bike, then unlock and start it with the key in your pocket. Likewise, you can lock it and leave it secured as long as you have the key fob with you.

The spoked steel wheels are shod with tubeless tires, an optional extra even on real adventure bikes. Details like the aluminum heel shield prevent scrapes on the perfectly fitted plastic body parts. The large CRF450 Rally-style dash screen has excellent backlighting, making it legible even at night. It also has a hood to prevent midday glare. I am still amazed at the ingeniously designed adjustment for the windscreen. 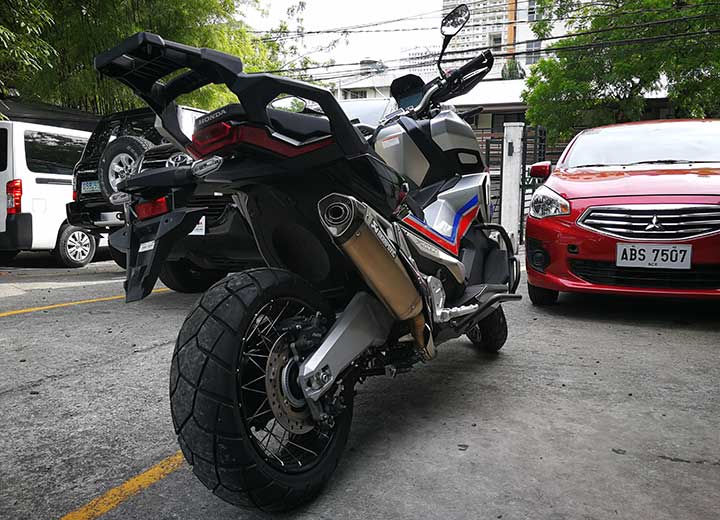 The X-ADV really proves its worth as an all-around machine. With the long footboards and the optional serrated pegs, I could vary the sitting position from laidback cruising to relaxed upright to slouched sporty. Standing on the pegs in a neutral position was possible after a minor adjustment of the handlebars.

This maxi-scooter is equally useful as a city commuter or as a dependable tourer. With the right tires, it may even scrape its wide crash bars when banked, or make rooster tails on muddy river crossings. I think I’ve made a rational choice. The X-ADV won’t take me as far off the road, but it dutifully serves all my motoring needs. 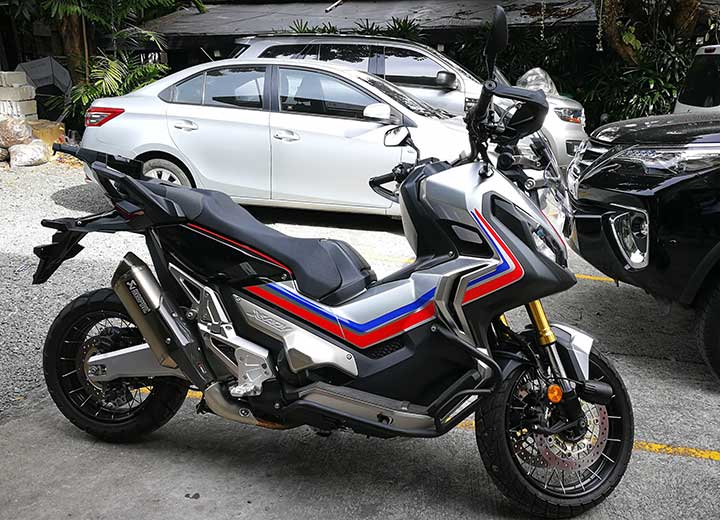 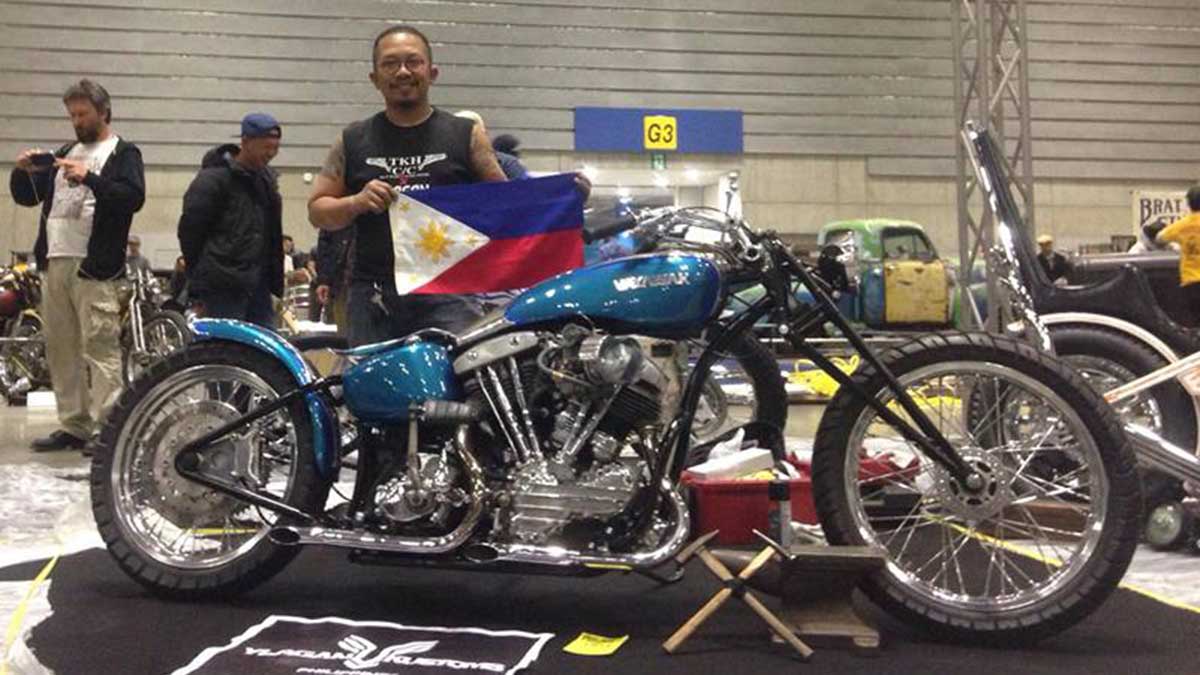