“The F355 was the car of its decade and it still feels bloody relevant today”
by Stephen Dobie | Oct 26, 2019
CAR BRANDS IN THIS ARTICLE

We hear it coming. With a noise akin to a MotoGP bike chuntering against its pit limiter, the sound of Jeff Segal’s Ferrari F355 fills our ears long before a flash of Rosso Corsa punches through the dank, gray conditions. He pulls into the car park with an immature splash through the minor flood on one side of its entrance, giggling as he does so.

This is no garage queen, and Segal is no ordinary owner. It’s an F355 Modificata—the only one, in fact—a lightly fettled version of the superlative ’90s car made unapologetically to its owner’s spec. Lack of exhaust bypass valves included. 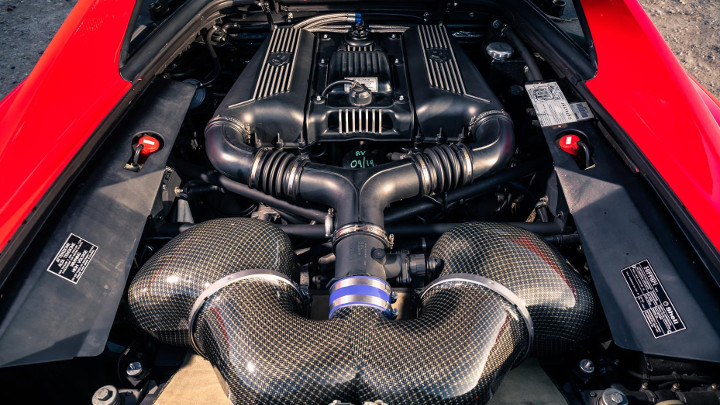 “It’s absolutely, objectively too loud,” Segal admits, “but I’d rather it be too loud than not loud enough. We wanted to make the exhaust tips a bit obnoxious in terms of how far they stick out. I’d say ‘job done,’ probably by a good inch or two. The whole thing was to just take it a step too far, see how it is, and then see if we want to pull back.

“I got kicked out of the Nürburgring for being too loud. They were furious, and they became even more furious when I thought it was the funniest thing in the world.” 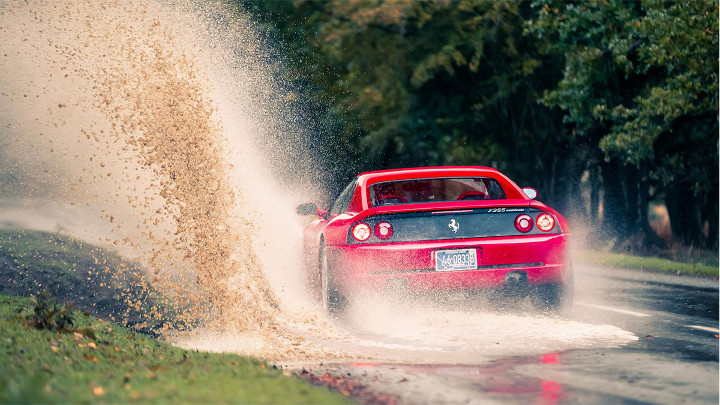 Segal races a Ferrari in the European Le Mans Series and won his class at the 2016 Le Mans 24 Hours. He lives in Miami and, as the Montana plate betrays, his car also originates from the US. The fact that he’s shipped it across to Europe to use while he’s here says a lot about how much value he places on actually driving his cars.

“I don’t see this car at Pebble Beach on the lawn at any point in the next 500 years, so I’m not concerned about the collectability,” he says. “I don’t worry for a second about the mileage.

“Obviously, I treat it very well in the maintenance sense, because I use it hard. At the same time, if one day the engine should perish, I’ll get another one and put it in. There’s not a single part of me that would worry about matching numbers. If that’s what you want, go buy an F40 or F50.” 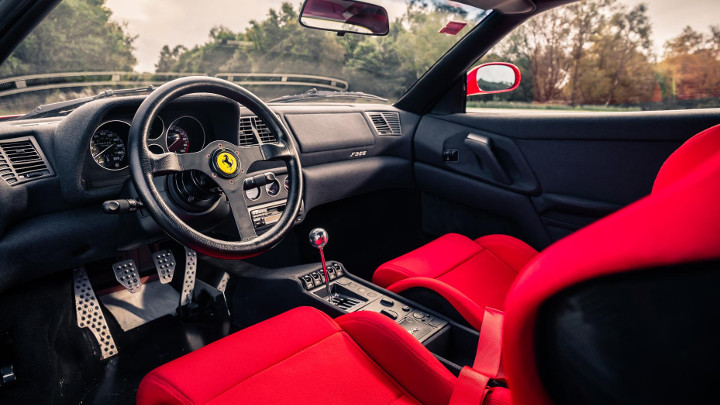 His Modificata bypasses the swottiness of Ferrari’s own Classiche scheme without going down a gauche, modified route. Every part is derived from the Ferrari parts bin, much of it from the F355 Challenge race car—power-steering rack, motorsport clutch, magnesium Speedline wheels, and rain tires—and some from the road car’s original options list, those fabulous harnessed bucket seats the highlight. Swathes of F40-sourced fabric cover almost every surface.

The 3.5-liter V8 hasn’t yet been touched, though that freer breathing exhaust pushes it past the 400hp barrier (from 375hp standard). 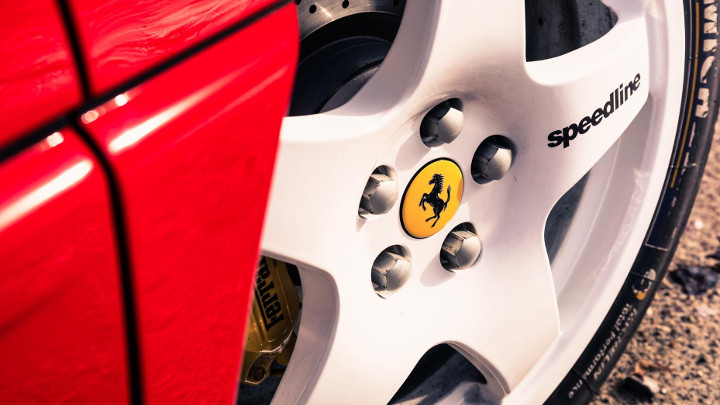 Why rain tires? “My whole thing was trying to make a car that’s really engaging to drive, even if it’s not the fastest thing out there,” explains Segal.

“From my experience racing, when you have rain tires on a drying or dry track, it’s a disaster. The car’s moving around all over the place, the tread blocks are squirming and overheating. It’s terrible for lap times, but it’s good fun.” 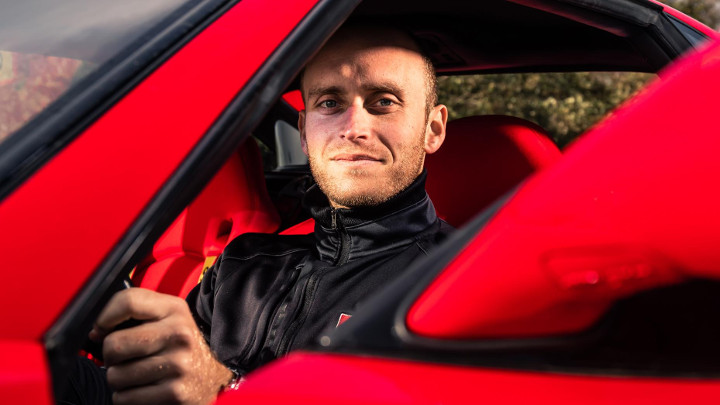 You can spec your own Modificata project, but there’s no production line and no official models. Segal’s got a road-legal 360 Challenge race car in the works—“that one might be a little harsh”—and a 458 Italia manual on the horizon. His is a more driver-focused, less trinket-y take on the restomod movement.

“I think that there’s a really cool thing that’s been happening for the past few years with this renaissance of hot-rodding—but in a modern way—with Singer being a huge pioneer,” he says.

“I love that they took a 911 and said, ‘We just want to make it better, our way, for us,’ but it’s a car that, in the end, is so nice and so expensive that you’d almost feel guilty driving the hell out of it.” 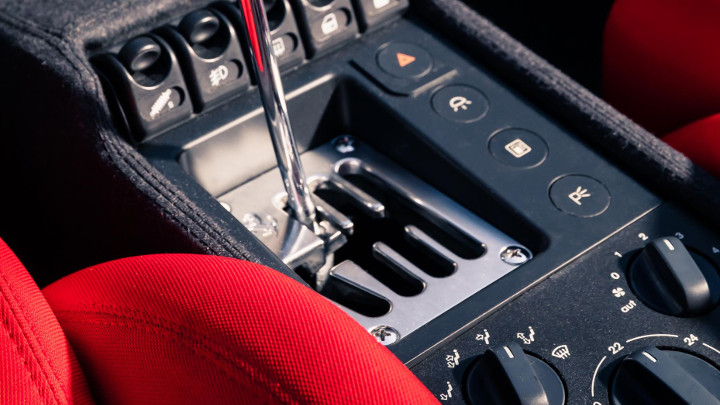 By the time I’ve been drip-fed every detail, I almost don’t want to drive his F355. This is a big deal for me, as it would be any car nut whose formative years involved the watching and rewinding of VHSs.

Especially with one of those old-fashioned metallic sticks nestled inside. I joined this industry as Ferrari was turning its back on manuals, and driving my first with that iconic open-gate is a day I’ve dreamed about for some time. It’s such a work of art, we’d be mourning its loss even if the gear change buried beneath was clunky and recalcitrant. 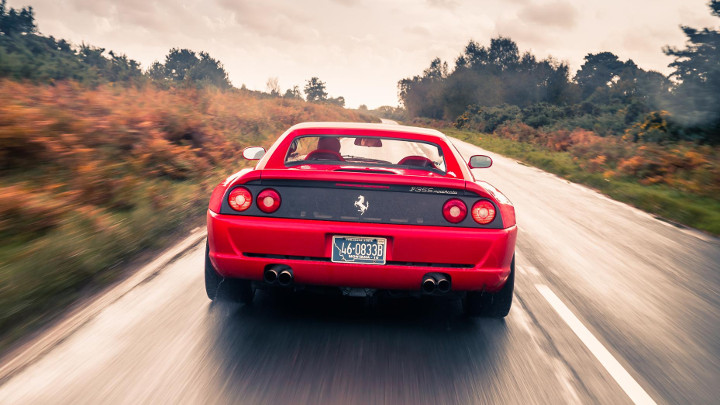 It’s not, of course. Operating a flat-plane-crank V8 with both feet is something everyone should get a shot at before the internal combustion engine is shamed into eternal hibernation.

Paired with a race clutch, it’s not easy. But that’s the fun. I manage a few mis-shifts into sixth rather than fourth (but hey, that’s the direction you’d rather mis-shift) while blipped down changes are almost pornographic, and best saved for remote areas. I reckon an expert shift into second would set off car alarms, shatter windows, and send nearby dogs into a frenzy. 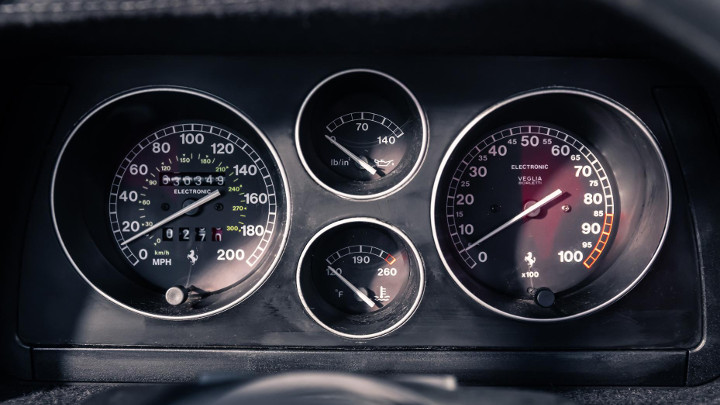 Yeah, this engine’s special. When I return from my first blast in the car, Segal tells me off for not revving it enough. “I couldn’t hear you!” he shouts. “Nothing happens below 4,500rpm, but you really want to be above 7,500 as much as possible.” Told you he was different. Segal is good. Be more Segal.

Attempts to find something to criticize are all in vain. The driving position is amazing. The steering superb. Its incredibly supple ride, helped by the squidgy sidewall of those tires, puts even a modern McLaren to shame. In fact, those tires have transformed an experience this weather should rightfully have washed down the nearest drain.

You don’t want to pussyfoot around hero cars like this during a brief ‘now or never’ acquaintance. And I simply don’t have to. Racket aside—Segal drives around in noise-cancelling headphones—it’s totally usable, too. Easy to see out of, simple to park. 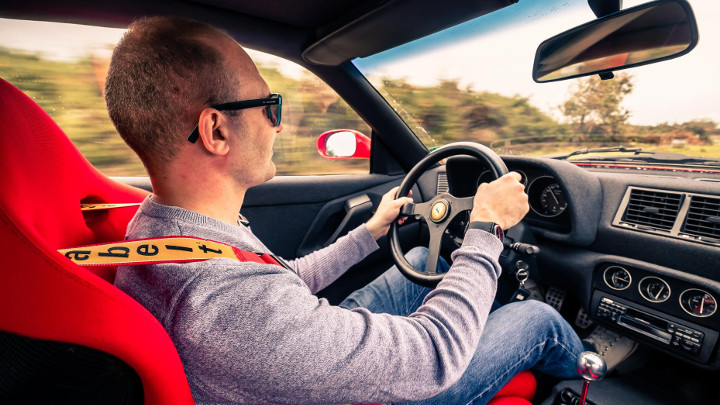 I can’t help but feel a little emotional on my final drive back to base. Spine-tingling, breathtaking, life-affirming...throw as much hyperbole as you like at the F355, it all sticks. Nowadays you simply won’t find an engine this mesmeric in a car whose dimensions and power output make the whole experience exploitable on road.

Cars from the ’90s are just better. They possess no electronic nannies, but don’t have knife-edge limits like older classics. The driver is an integral part of their operation, but his or her mistakes are usually forgiven. Segal is an unashamed ’90s nerd too, and as Jonny snaps away at the Ferrari’s finer details during a brief respite from rainfall, my new American friend and I geek out on our favorite Speedline wheels. Anyone nearby was probably wishing for the exhaust noise back. 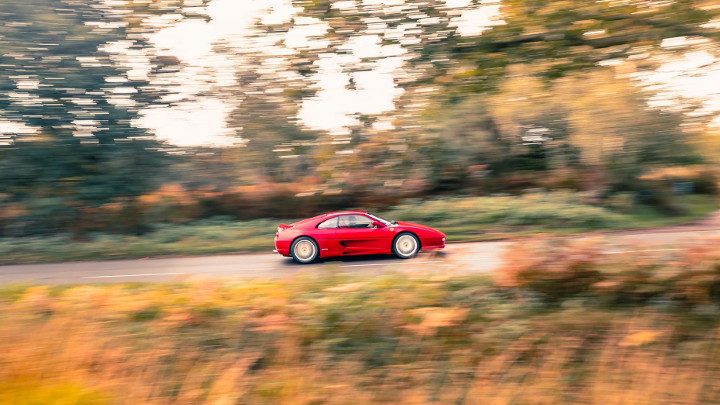 “The fact cars like this are well-received should be something manufacturers eventually take notice of,” says Segal. “It’s not a Ferrari-specific thing, it’s everybody; as they’re making their cars faster and faster, people love them less and less. This Modificata probably stands at $150,000 (around P7.7 million), so it’s not a cheap car, but in context of what you could get for that, it makes a pretty good argument for itself. There’s nothing I’d want new for that money.”

The F355 was the car of its decade and it still feels bloody relevant today, allowing its driver to experience one of the all-time great powertrains and chassis with minimal impact on road users around them. Well, except for the riotous sound it makes. Maybe I’ll order my Modificata with a slightly lower volume setting...

NOTE: This article first on TopGear.com. Minor edits have been made. 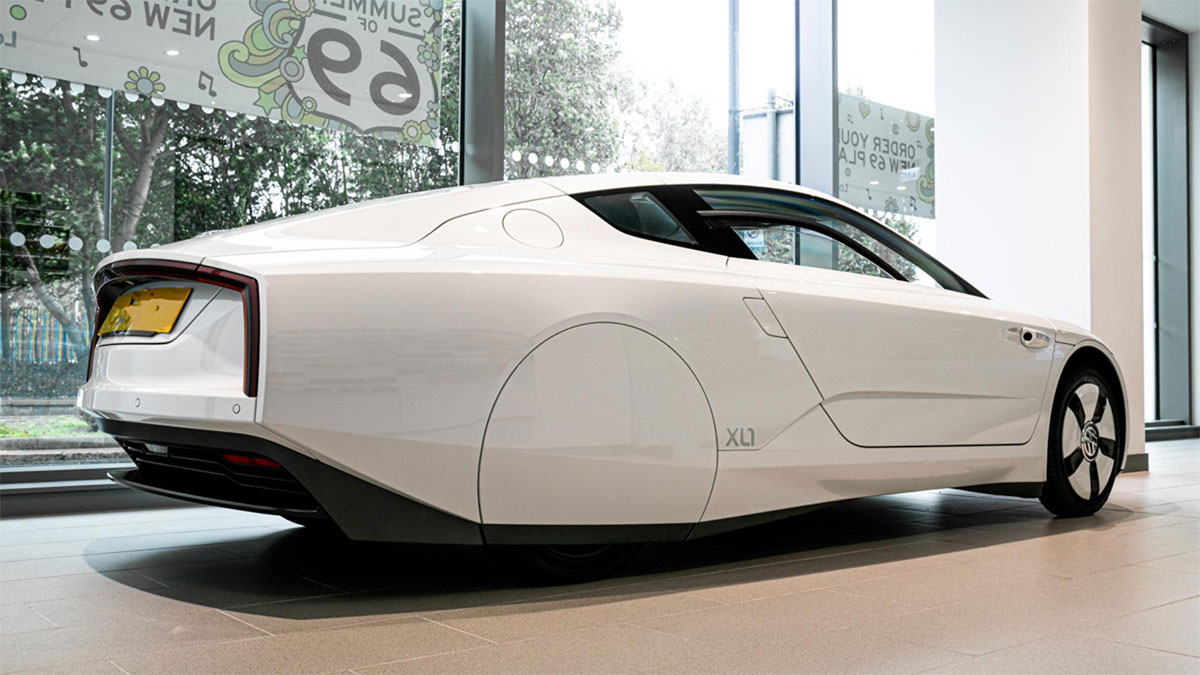 Love fuel economy? Then bid for this Volkswagen XL1
View other articles about:
Read the Story →
This article originally appeared on Topgear.com. Minor edits have been made by the TopGear.com.ph editors.
Share:
Retake this Poll
Quiz Results
Share:
Take this Quiz Again
TGP Rating:
/20