Small and striking
by Dinzo Tabamo | Jan 30, 2014
CAR MODELS IN THIS ARTICLE 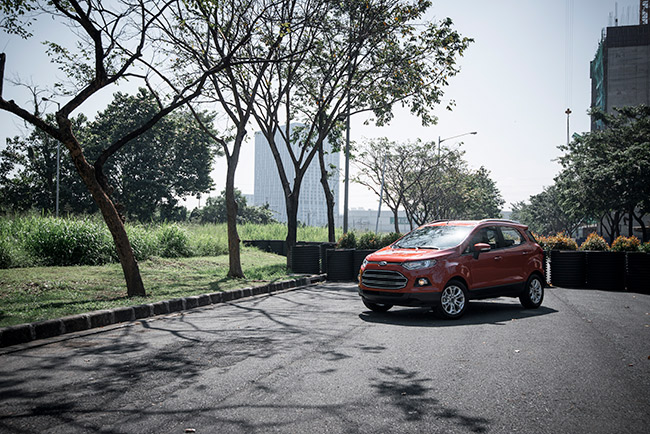 Among the American carmakers operating in our country, Ford enjoys the most brand cachet and loyalty. Chevrolet is still growing its market share, and Chrysler is staying on the premium side of the industry for now. Meanwhile, the Blue Oval brand is opening new dealerships and people are eagerly lining up to get their hands on the macho Ranger.

Soon, people will be trooping to Ford dealers to check out a new vehicle. Tonight, the Ford EcoSport will make its debut to the media, marking its official launch in our market. Well, it will debut to the rest of the motoring media who haven't seen it personally anyway. We were fortunate to have a go with a production unit during the holidays.

In the metal, the EcoSport is small and striking. There's something about its bold face that just draws attention. It's a balanced design, with equal doses of restrained aggression from the front to the back. The 200mm ground clearance is enough to protect the bumper and undercarriage from our rough urban roads. And the 550mm water-wading capacity surely won't hurt when the rainy season arrives. Don't go climbing mountains, though--this is strictly a 4x2 affair. In its own cute way, the EcoSport certainly lives up to the Built Ford Tough image.

Its genesis is the Fiesta platform, and you can see hints here and there, especially in the doors and side mirrors. On the inside, the EcoSport's economies of scale fully reveal themselves. The dashboard is--from our initial impression at least--a carbon copy of the Fiesta's. In a lot of ways, this is good, because save for a glitch or two with the voice command function, the Fiesta cabin is a pleasant place to spend long driving hours in.

To entertain you in inevitable traffic, there's a Ford SYNC system with all the connectivity expected from a modern vehicle in the age of the smartphone. You can listen to music and make calls with SYNC, and enjoy your digital tunes through six speaker placements.

When the road opens up, you have 142Nm of torque to get you up to speed. And when you're on a really open road like an expressway, you can rely on 108hp to get you to your out-of-town destination. For those who are into numbers, yes, this is the Fiesta engine with two fewer horses and two more newton-meters. It's understandably tuned more for grunt than top speed.

The launch color is a delicious shade which Ford calls Mars Red. But there are other fascinating hues to choose from, including a promising shade of blue a reader sent us. (Read: So this is what an actual PH-market Ford EcoSport looks like.)

Now, have you been scanning through this article quickly, looking for the telltale six-figure arrangement of numbers that would signify a price? Well, stop your eyes here. And yes, it's only six digits, not seven. Because the top-spec 1.5L Titanium AT variant only goes for P975,000. The 1.5L Trend AT costs P875,000, while opting for a Trend MT will save you P50,000 (go for it). And last but not least, the base 1.5L Ambiente MT variant is asking for a mere P775,000.

As of press time, the trim levels of the different variants have not been released to us. But expect updates as more information becomes available. For now, enjoy the exclusive photos and video we've prepared, and schedule a visit to your friendly neighborhood Ford dealership soon.

Team McLaren leads the way in Formula 1 testing
View other articles about:
Read the Story →
This article originally appeared on Topgear.com. Minor edits have been made by the TopGear.com.ph editors.
Share:
Retake this Poll
Quiz Results
Share:
Take this Quiz Again
TGP Rating:
/20