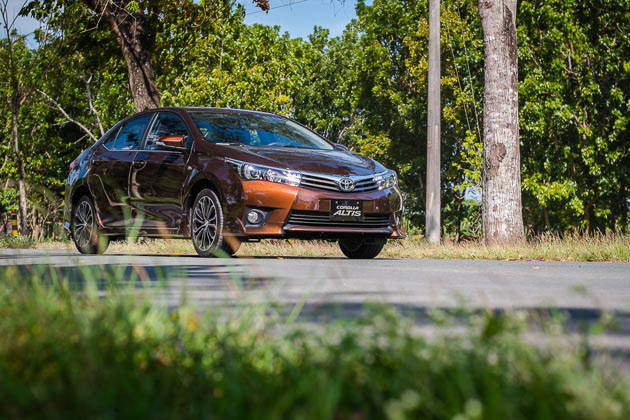 Once upon a time, the Toyota Corolla ruled our roads. However, the Asian economic crisis that struck the region in 1997 forced buyers to shift from compact sedans to smaller, more affordable subcompacts--at least in our country. But with over 40 million units sold worldwide since the first-generation model hit the streets in 1966, Toyota won't simply abandon the Corolla nameplate. So, now on its 11th generation, the Toyota Corolla Altis is finally here courtesy of Toyota Motor Philippines.

The new Corolla Altis continues Toyota's "keen look" and "under priority" frontal design, which was first seen on the current-generation RAV4, with the Altis incorporating horizontal bars in the upper grille that extend into the headlight clusters, emphasizing the car's width.

The Corolla Altis also has short front and rear overhangs that, together with the longer wheelbase and prominent wheel arches, emphasize the car's dynamic stance. At the rear, a wide taillight cluster design that echoes that of the midsize Camry, gives the Corolla Altis a more upscale appearance. Throw in the aero kit that comes standard with the top-spec 2.0-liter V variant, and you'd want to leave the car's exterior design alone.

Toyota's fascination with width for the Corolla Altis continues with its interior, specifically its new horizontal dashboard panel that incorporates a larger instrument binnacle. A nice touch is the design of the center console's upper air-conditioning vent, which is similar to that of the first-generation Corolla. And with a wheelbase that's 100mm longer than that of its predecessor, the new Corolla Altis's rear cabin is more spacious and offers more legroom.

As we mentioned last week, powering the Corolla Altis are the same 2.0- and 1.6-liter in-line-four 16-valve DOHC with Dual VVT-i engines, although this time, the transmission choices are either a six-speed manual or a seven-speed sequential CVT.

As we reported last week, the prices of the five variants of the new Corolla Altis are:

Are you placing an order for the new Toyota Corolla Altis?

John Button, father of Formula 1 champion Jenson, passes away
View other articles about:
Read the Story →
This article originally appeared on Topgear.com. Minor edits have been made by the TopGear.com.ph editors.
Share:
Retake this Poll
Quiz Results
Share:
Take this Quiz Again
TGP Rating:
/20