Report: Ford EcoSport's next destination could be North America

Units to be sourced from Thailand
by Andrew Guerrero | May 18, 2014
CAR BRANDS IN THIS ARTICLE 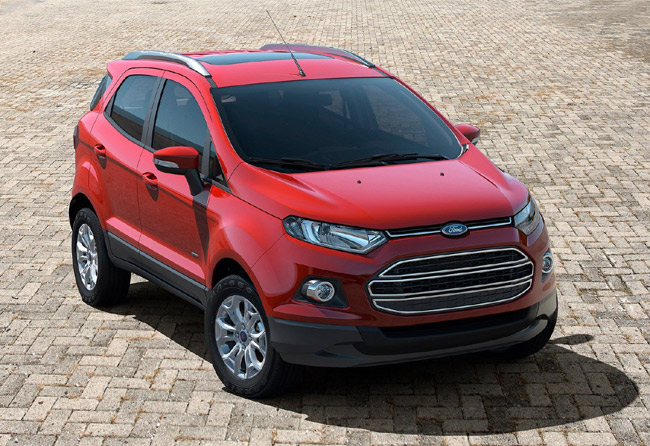 The Ford EcoSport, the American carmaker's B-segment crossover, has been popular in its core markets. In fact, it's quickly becoming one of Ford Philippines' fastest-selling models here. The first-generation EcoSport was mainly sold in Brazil and a few neighboring markets. The current second-generation model is a more global one, which is currently being manufactured in Brazil, India, China and Thailand. It's now also being exported to other markets like South Africa, Australia and Europe. Its next destination could be the US and Canada.

With the sudden interest in B-segment crossovers these past few months, Ford executives have started giving some hints that they are considering the EcoSport for the US market. Ford COO (and soon-to-be CEO) Mark Fields said they are studying that segment, one that's soon to be occupied by other B-segment crossovers like the Chevrolet Trax, the Honda HR-V and the Jeep Renegade.

"I think over time, you'll see even smaller cars in the United States," said outgoing Ford CEO Alan Mulally. "I think, in time, it will be here." He was referring to the EcoSport, of course.

The Economic Times has recently uncovered some juicy info from sources inside Ford. The model being considered for the US market will be the face-lifted EcoSport. The tentative time frame for its launch is sometime not later than the first half of 2016. The next bit of info is interesting: The plant assigned to supply the US with EcoSport units will be Ford's facility in Thailand.

Ford's plant in India, which already supplies other markets outside its region, can barely keep up with local demand. Any added capacity in the Indian plant will most likely go to its domestic market. Ford's car plant in Thailand has the extra capacity since it currently only supplies the EcoSport to Southeast Asian countries. Another reason the Thai plant is also being considered is that vehicles manufactured there have better noise, vibration and harshness levels than the ones manufactured in India.

If everything stays on track, the EcoSport may soon be a step closer to being a true global model like its Fiesta sibling. Speaking of Fiestas, it was reported last year that Ford might move the production of the next-generation US- and Canadian-spec Fiestas to Thailand. This could open the possibility of more powerful variants of the EcoSport and the Fiesta being manufactured in Ford's Thai plant, which also supplies Ford Philippines.

Jaguar to complete production of lightweight E-Type after 50 years
View other articles about:
Read the Story →
This article originally appeared on Topgear.com. Minor edits have been made by the TopGear.com.ph editors.
Share:
Retake this Poll
Quiz Results
Share:
Take this Quiz Again
TGP Rating:
/20