The original cute-ute is fun again
by Dinzo Tabamo | Jan 17, 2013
CAR MODELS IN THIS ARTICLE 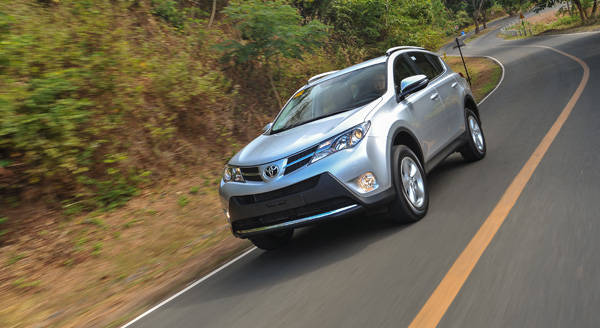 The vehicle that created the fun compact SUV category is back. And this time, it seems like it's actually fun again.

When the first RAV4 was introduced globally in 1994, it was regarded as a quirky crossover (if there was such a term back then) that had some utility value. But the fun factor and Toyota's reliability eventually won people over. The second-generation model strengthened the RAV4's appeal with its universally appealing design. But when the third-gen rolled in, its high price and business-like demeanor made people wary and probably herded them in the Fortuner's direction (although that could have been Toyota's plan all along).

And now, the all-new, fourth-generation RAV4 is here. And from what we see, Toyota wants to play again.

The design is a bit of a conundrum. It's not because the designers were lazy. In fact, we like the strong stance of the face and the confident thrust of the rear. From a certain angle, it even evokes the Lexus RX crossover, although if you squint a bit, the front profile is also reminiscent of the Avanza MPV. Like we said, it's a bit confusing, but definitely not dull.

What we do like is the cabin. The seats are more supportive than we remember, and the steering wheel is a wonderfully grippy package made of leather and quality materials. There are numerous buttons on the tiller for controlling audio, cruise control and hands-free calling. And in what is probably inspired by the 86, there are carbon-fiber surfaces scattered inside the cabin.

Under the hood, the 2.5-liter engine from the new Camry powers the RAV4. It develops 174hp and 233Nm. This allows the RAV4 to carry its heft quite easily--although there is noticeable lag when you step hard on the accelerator. Still, cruising on the highway and negotiating the twisties are still fun.

For the top-spec 4x4 variant we tested, creature comforts inside are a six-speaker audio system with a 6.1-inch TFT display, driver-side power seats, net tray with tonneau cover (useful for stashing iPads and cameras), and natural leather seats.

All those features certainly make the new RAV4 a plush and powerful travel companion. What we're concerned about is the price. This 4x4 variant costs P1,963,000, and it's hard to justify that kind of money for a compact SUV--regardless of how good it is. The 4x2 variants are easier to justify: P1,582,000 for the full-option 4x2 and P1,357,000 for the base 4x2. But we have yet to review those units so the verdict is still out.

Regardless, Toyota successfully returns to the genre it started almost 20 years ago. Its new RAV4 is boldly stylish, comfortable, energetic and spacious. Even though it commands a higher asking price now, it still makes a compelling case for itself.

NOTE: Get our February 2013 issue for a more comprehensive story on the 2013 Toyota RAV4.

Detroit 2013: Ford's next-gen pickups will look like this
View other articles about:
Read the Story →
This article originally appeared on Topgear.com. Minor edits have been made by the TopGear.com.ph editors.
Share:
Retake this Poll
Quiz Results
Share:
Take this Quiz Again
TGP Rating:
/20