“Phantom violations are no joke. In this case, though, we’re finding it hard to contain our laughter. The scenario is just that comical.

“A motorist trying to renew his driver’s license was surprised to learn that he had been tagged for not wearing a helmet while riding in Iloilo. The problem? He has never set foot inside the province and he doesn’t know how to ride a motorcycle.

“Yikes. He reached out to the Land Transportation Office’s (LTO) Iloilo office to clear things up, but was told they could not address the problem at the moment because they had no electricity. He followed up again not long afterward, but was told the office’s system was offline. After reaching out one more time, LTO personnel told him that they still had to meet to discuss the issue.

“Eventually, Salvador visited the LTO’s Law Enforcement Service to try to sort things out. According to the department’s deputy director Roberto Valera, it’s possible that someone presented a fake driver’s license which led to Salvador being wrongly tagged.”

“While formats like ‘2 joints’ and ‘#1 Lodi’ are completely illegal, there are still ways to go about customizing your license plates within the bounds of the law. It’s going to cost you, though.

“The guidelines, which are under Memorandum Circular no. 2022-2335, cover everything from sedans and midsize SUVs to vans and pickups. It’s important to note, however, that vintage units and motor vehicles with more than four wheels do not fall under this memorandum’s coverage.

“Another thing that must be mentioned is that motorists with vehicles registered before the memorandum’s issuance (June 20, 2022) have a few extra conditions they must adhere to. We’ll get to that later.

“Anyway, you or an authorized representative can apply for an OMVSP at any LTO regional or district office. You’ll find the OMVSP application form at the bottom of this file. Below is a full list of requirements:

“Oh, and below are the fees you’ll have to pay. Spoiler alert: They’re pretty steep.

“So yeah, there are still limits to what you can put on your special license plate. In addition to the rates mentioned above, the applicant must also pay for other applicable fees and charges related to motor vehicle registration.

“The rest of the OMVSP application process happens on the LTO’s end. You can check out the details here.”

OTHER STORIES YOU MIGHT HAVE MISSED:
Confirmed: Hyundai Stargazer and Ioniq 5 expected to arrive in PH this year
The all-new Honda AirBlade 160 is now in PH, priced at P119,900

“In case you missed it, the implementation of the number coding scheme during morning rush hours is back. The Metropolitan Manila Development Authority (MMDA) made the announcement last week, so motorists should be aware by now.

“Under the modified scheme, the policy will cover 7am to 10am in addition to 5pm to 8pm.

“According to the MMDA, a total of 1,588 motorists were caught violating the expanded number coding scheme so far today. This number is made up of both on-the-ground apprehensions as well as no-contact apprehensions. That figure is likely to rise further once it includes the tally for this evening’s implementation.

“Currently, the implementation of the expanded number coding scheme is still in its trial phase. Come August 18, though, the MMDA will begin issuing violation tickets to motorists who fail to adhere to the modified policy. No-contact apprehension cameras will also be on the lookout for violators.”

“A number of new and old House Bills have just been filed in the 19th Congress, two of which have stirred up the motorcycle-riding community quite a bit. We’re talking about the proposed Anti-Lane Splitting Law and Motorcycle Safety Riding Act.

“The former is House Bill No. 1419 which seeks to penalize riders for lane-splitting. The refiled bill aims to make roads safer for all motorists, but the problem with it is it somehow lacks the proper use of terminologies, particularly the difference between lane-splitting and lane-filtering.

“The latter, meanwhile, is House Bill No. 32 which seeks to establish motorcycle rider clubs accredited by the Land Transportation Office (LTO) and require all riders to become members of said clubs as a requirement for motorcycle ownership and registration. Our readers have already since voiced out their opinions on this one. If you need an explainer on this, you can check out this article.

“Now, what about these two bills? Well, there’s a chance we may never see them get passed into law. In a recent Makina Moto News episode, Zach Lucero reported that newly re-elected Senator JV Ejercito will do his part to oppose the proposed acts.”

“Local motoring hasn’t had an issue quite as hot as the no-contact apprehension program (NCAP) in quite a while. On paper, it’s an admirable effort toward bringing order to our roads. Its implementation leaves a bit to be desired, though.

“The Philippines is hardly the only nation that has looked into implementing such a system. In a Facebook post, Metropolitan Manila Development Authority (MMDA) Task Force Special Operations (TFS) head Bong Nebrija recalled a visit to a South Korean command center that utilizes artificial intelligence in its camera system.

“‘CCTV is part of a smart city solution that helps in traffic management and enforcement, transport management, and security,’ Nebrija said in his post. ‘When we visited the command center in Seoul, they even have CCTVs interfaced with an artificial intelligence system that can detect emotions, it follows an algorithm that can differentiate whether you’re happy, a threat, or suicidal.’

“That’s impressive—but also kind of unsettling at the same time?

“‘Not only that, their system can even interconnect with private CCTVs of commercial establishments and houses so they can pursue through cameras a fleeing criminal or terrorist. Meron ding facial recognition and plate number recognition capabilities. Kaya kita ka at makikilala sino dini-date mo, malalaman san mo dinate (restaurant, theater or motel), at kaninong sasakyan gamit mo.’”

“The P300 penalty for violating Metro Manila’s number coding scheme might seem like spare change to some. If you barely make enough to get by, though? That sum is the difference between having food on the table and going to bed on an empty stomach.

“House Bill no. 3423, also called the An Act Protecting the Rights of Motorists, wants to address this issue. Filed by Representative Joey Salceda, the new piece of legislation essentially aims to put a cap on how much motorists can be fined for traffic violations.

“The bill in its entirety has yet to be uploaded to the official House of Representatives website. According to a report by GMA News Online, however, the bill proposes that fines for the first offense of a traffic law should not exceed the daily minimum wage in the area where the violation was committed.

“Meanwhile, for the second and third offenses, the penalty must not exceed twice the minimum wage. The bill also proposes to make community service an option for violators who depend on driving for livelihood.

“‘The point of traffic laws is orderly transport, not punishment. The penalties, especially for local minor traffic violations, can go as high as P3,500 for first offense,’ the lawmaker said. ‘That is confiscatory, and it sets up room for negotiating with the traffic authorities. The child of confiscatory penalties is kotong.’”

“Putting up a cable car system to address Metro Manila’s traffic mess? This isn’t the first time the idea has been brought up. Before Senator Robinhood Padilla, former Department of Transportation (DOTr) head Arthur Tugade pitched a similar setup in 2016.

“But will it work? According to architect Jun Palafox Jr., it might help loosen congested roadways, although it will not solve the capital’s traffic mess.

“In a recent TeleRadyo interview, the urban planner discussed Padilla’s latest proposal. By the sound of it, a cable car system has promise, but it will not be the magic solution to Metro Manila’s traffic woes.

“‘It will alleviate the situation. It will not solve the traffic. Kailangan lahat ng transportation modes tignan na natin,’ Palafox said during the interview. ‘Even water transport. Matagal na namin na-propose, like modern transport along Laguna Lake, Pasig River, and Manila Bay. We can interconnect them.’

“Palafox added that a cable car system could be put up in the eastern part of Metro Manila, as many commuters who cannot afford properties closer to their place of work reside there.

“Asked whether or not putting up a cable car system in Metro Manila would be financially viable, Palafox said that at this point, all options should at least be considered. 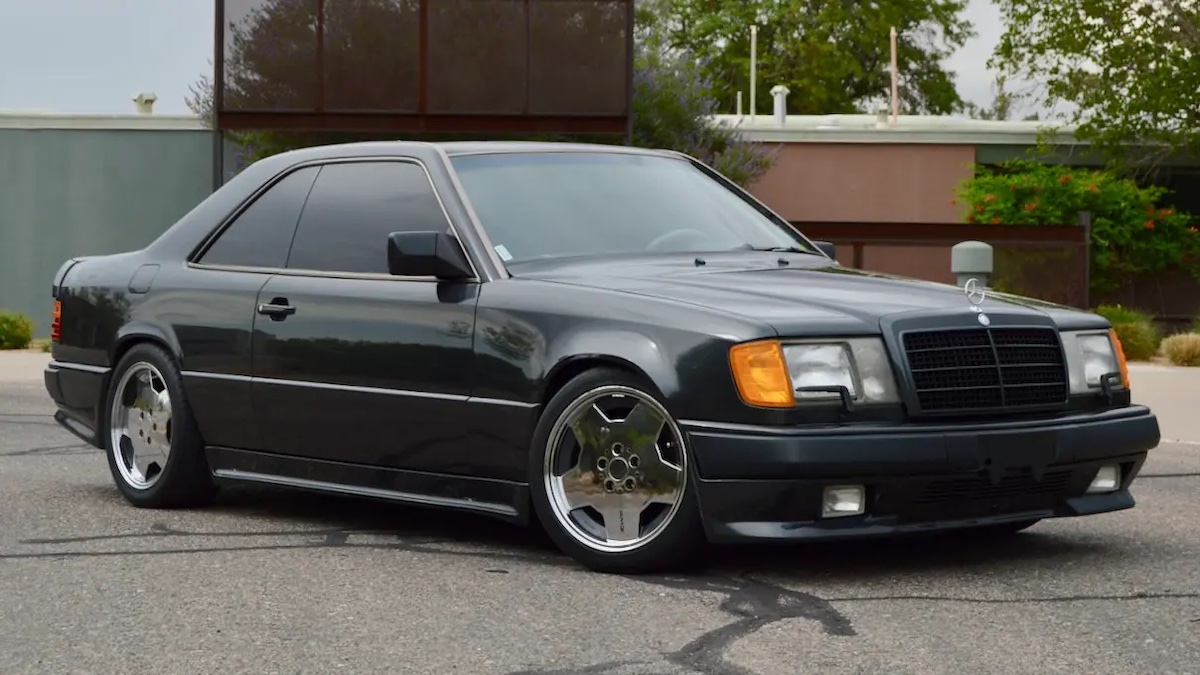 Mercedes-Benz AMG Hammer is the most expensive '80s E-Class to date
View other articles about:
Recommended Videos
Read the Story →
This article originally appeared on Topgear.com. Minor edits have been made by the TopGear.com.ph editors.
Share:
Retake this Poll
Quiz Results
Share:
Take this Quiz Again
TGP Rating:
/20