We meet the Toyota for everyone
by Andy Leuterio | Feb 22, 2014
CAR BRANDS IN THIS ARTICLE 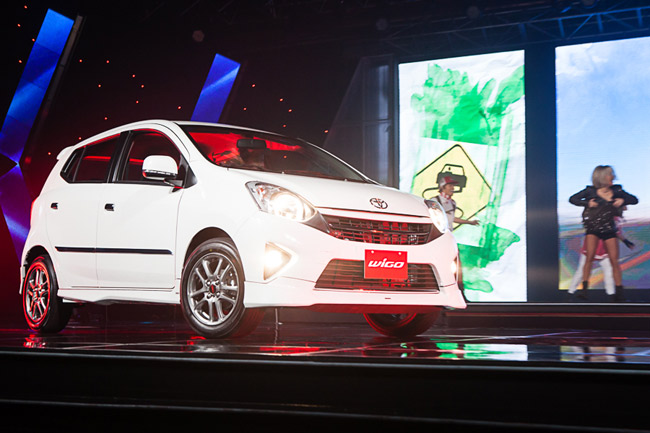 Not everyone can afford a Toyota 86, let alone a Land Cruiser. Nor can too many people afford an Altis, or even a Vios. For the entry-level price point, which has been dominated by the value leader Mitsubishi Mirage, Toyota has just trotted out the Wigo, a mini car with a surprising amount of room for not a lot of money.

If the styling is rather reminiscent of an Avanza, the similarity has genetic roots and is happily functional as well, because the Wigo is largely a Daihatsu affair just like the Avanza. And just like the latter's functional sexy-box looks, so goes the Wigo with what's claimed to be class-leading passenger and cargo space. This shouldn't actually be a surprise, because Daihatsu (majority-owned by Toyota) has specialized in small cars for the longest time and knows how to get the most room out of limited sheet metal.

Manufactured and (mostly) designed by Daihatsu save for some aesthetic touches Toyota reserved for itself--like the front and rear--the Wigo (also known as the Daihatsu Ayla) will hit the streets for as little as P448,000 bare-bones and just P534,000 nicely spec'd. The silhouette is actually more micro-MPV in the same spirit as the Honda Jazz, and this yields big dividends in passenger space and cargo volume. The corporate face of Toyota is evidenced by the dual grille design with the oversized headlamps and arrowhead-type foglamps. If you squint your eyes and (maybe) take a certain type of mushroom, you might even see a hint of Lexus LFA there!

Kidding aside, this is bad news for competitors like the Mirage, the Suzuki Celerio, the Hyundai Eon, the Chevrolet Spark, and even the recently introduced Hyundai Grand i10, because none of them can match the Wigo's combination of size, price and features. At P534,000 for the four-speed automatic-equipped 1.0G, buyers get all power features, fog lamps, dual airbags, front and rear brake discs with ABS, antitheft system, and even a navigation-ready stereo with iPod, USB and video capabilities.

For the base 1.0E, you save a hundred grand but also lose out on most of said features, have to row yourself with a manual, but still retain both airbags. The 1.0G gets 175/65 R14 tires on cute six-spoke wheels, while the stripper gets by with 13-inch donuts on covered steel wheels. The stripper will look good to fleet managers, while the more kitted-out G should appeal to folks looking to buy their first car, or parents who need to get one for their kid who's going to college (or even as a second or third car for everybody else). Toyota even had one with a sporty TRD kit that was honestly quite desirable. A five-speed manual can also be had with the G (P499,000).

While most everybody at the Cebu launch was trying to find the engine (it's so tiny and cute it could fit in a small backpack), I was more impressed with the amount of room inside. Even with our technical editor Ferman Lao comfortably fixed in the driver's seat, I had a surprising amount of legroom in the back; my knees didn't even touch the back of the driver's seat. The tall roof has a scalloped headliner to really get the max amount of headroom so even six-footers won't bump their heads against it. The one-piece rear seatback also folds down. Configured like so, Toyota claims that two large balikbayan boxes and two smaller boxes (like you'd use for fruits) easily fit inside. With the rear seatback up, there is still a decent amount of space for a small cooler and several soft bags. I could even sit back there, actually.

The Toyota brochure doesn't say how much the Philippine-spec Wigo weighs, but Wikipedia says it has a curb weight of 800kg for a 12.5kg/hp ratio. So, no, do not expect this car to do anything more than get you from Point A to Point B in at least the same day. Don't even expect a lot of fabric inside except on the seats, as the dashboard, center console, and door panels are all hard plastic. The speedometer tops out at 200kph, which should be a source of amusement if you ever find yourself going downhill with a 40kph tailwind. You can at least expect something so small to be thrifty at the pump, and to be similarly cheap to maintain (three spark plugs, not too much oil to replace). The fuel tank holds 33L. Toyota has yet to give out official fuel consumption figures, but expect it to go into the high teens. The suspension uses the standard front strut-rear torsion beam layout, adding a stabilizer bar for the G. Unfortunately, the launch was strictly an unveiling so no driving impressions yet.

With six rather serious colors to choose from (white, silver, gray, blue, light blue and black; no candy colors for Toyota), a decent amount of standard features, impressive space, a certain level of styling pluck, and the Toyota reputation for parts availability, I would not bet on the Wigo being anything but a certified hit. 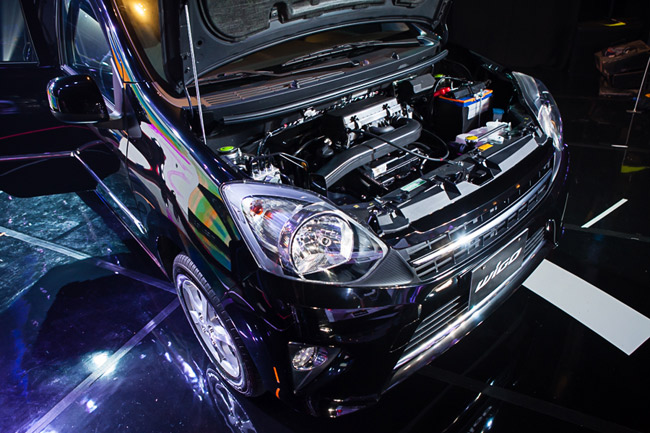 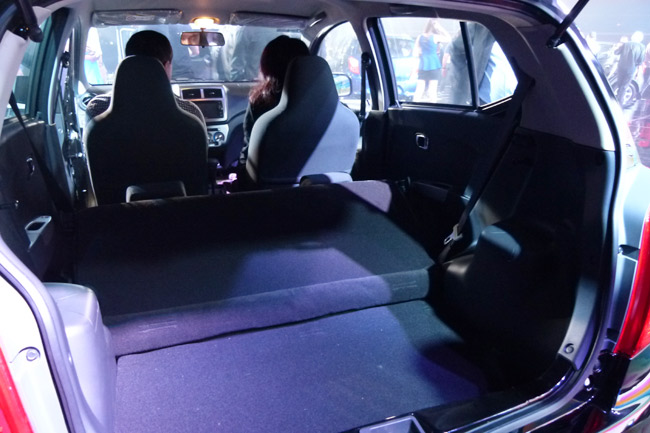 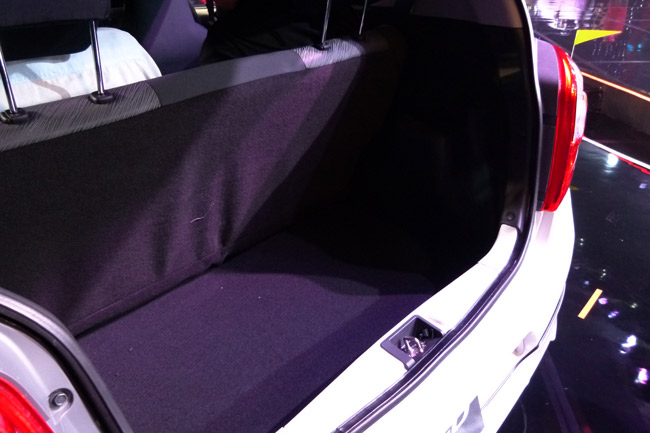 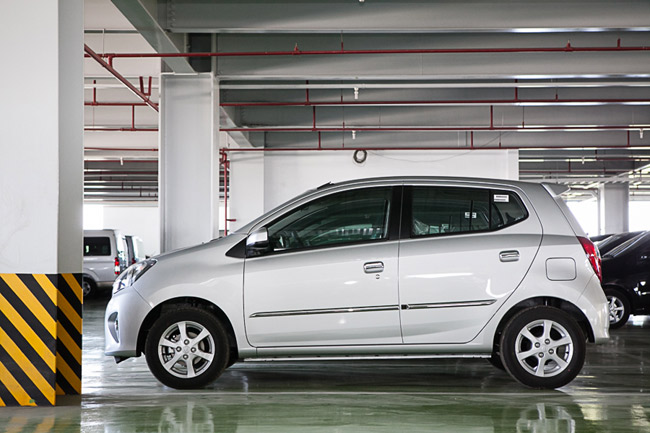 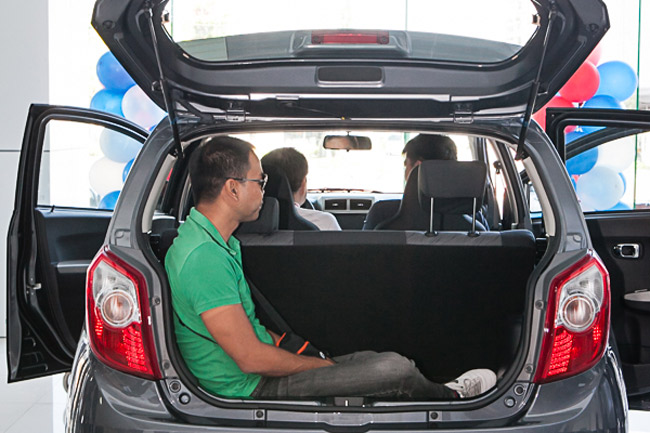 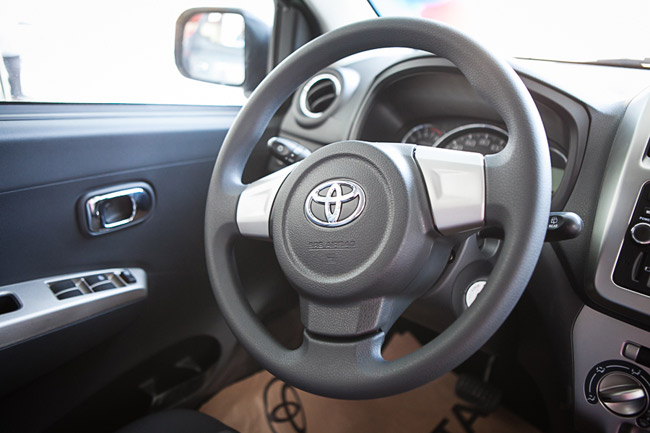 If car racing were easy, everybody would be doing it
View other articles about:
Recommended Videos
Read the Story →
This article originally appeared on Topgear.com. Minor edits have been made by the TopGear.com.ph editors.
Share:
Retake this Poll
Quiz Results
Share:
Take this Quiz Again
TGP Rating:
/20