How much better is the all-new Porsche 911 versus the old model?

“For a borderline supercar, practicality is the 911’s key trick”
by Paul Horrell | Jan 29, 2019
CAR BRANDS IN THIS ARTICLE

The Porsche 911 has shown an amazing resilience to the fashions of more than five passing decades. Its look, its dynamics, and its very purpose have been steadfast and yet adaptive. Now it’s time for the next step, but in the same direction.

A new 911 has happened eight times—only eight—since 1963. Sometimes those generational leaps are big (the 996 was upsized, water-cooled, and really a wholly new car). Sometimes they’re more about the details. This, the 992, is a kinda medium-sized move from the 991. 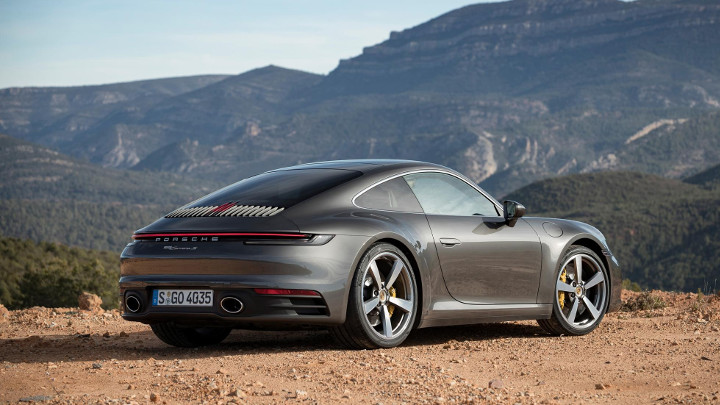 The whole body is, to all intents and purposes, new. Before, the shell and skin was two-thirds steel. Now it’s only one-third, the rest being aluminum in sheet, extrusion, and cast forms. On the outside, every metal panel is changed. The body is wider and shapelier, but still in that blissfully subtle 911 manner.

The cutline of the hood and its contours hark back to the 1974 G-series. The calligraphy on the tail and the design of the fully-analog rev counter both nod to the 901. The spirit of that car resides here, Porsche wants to imply.

And yes, it does reside here. The new 911, like any 911, is no diva. It’s just a car, that’s the appeal. So the 992 does all the car-like stuff: the cargo area, the kid-carrying rear seats, the practical upright cabin, the glassy view out. Everything just...works. It has soothing daily manners, the ability to slip through traffic or to swallow highways.

But it isn’t just a car, is it? Unless you’ve lived under a rock, you’ll be aware of the race-hardened patrimony the 911 embodies. And its actual dynamic characteristics live up to that. The song of its engine, the connectedness of its chassis, the balance and the precision of its controls. A Porsche is animate in the way it connects with you.

This contradictory mastery of both the prosaic and the thrilling is always what made the 911 great. And so did its ability to evolve with the times. See an early one and this generation side by side, and the effects of progress are reflected in an almost comical hall-of-mirrors increase in girth. It’s how the world has moved.

Launched so far as the Carrera S and 4S, the new car is substantially wider than the 991. Which is a pity because compactness was part of what made a 911 handy, whether in the city or threading down a B-road. But you can see why it’s grown. More width means more grip, and space for wider and larger-diameter tires—the rear rims are 21-inchers. The 911 now clings on like a supercar. 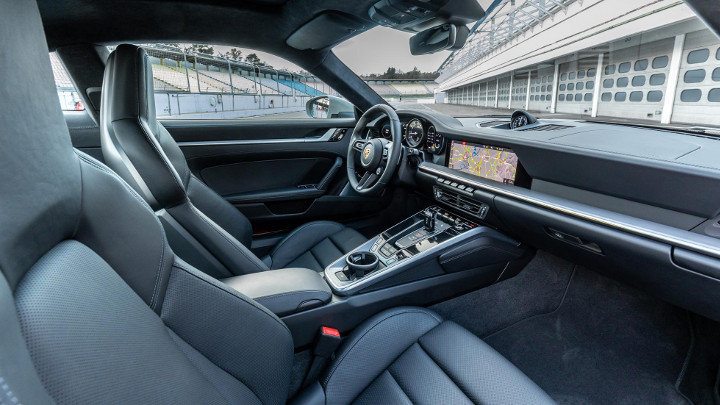 The interior is almost entirely new. It might contain a few visual recollections of cars past, but it is absolutely of the moment. The interfaces are all about reconfigurable screens, the equipment, and driver-assist comprehensive.

For the S and the 4S, we now have 30 more horses than before, at 450hp. Zero-to-100kph times vary according to equipment, but hover around the mid-threes.

The engine, a 3.0-liter turbo, is basically the same one that was made afresh for the arrival of turbos partway through the outgoing 991’s life. But it’s got higher compression, clever piezo injection, and, most significantly, all-new induction and exhaust systems. Turbos and intercoolers are new and bigger, and all are positioned more advantageously for sharper response. The exhaust gets particulate filters, too.

The PDK transmission is an entirely new eight-speeder. It’s quicker-shifting and all, but mostly, it’s about saving fuel at speed. Both seventh and eighth are so long, the car actually gets to its circa-306kph at the top end of sixth.

In the chassis, we find similar principles as before, but with multiple worthwhile upgrades. They include higher-geared steering (with optional four-wheel steer as before), better brakes, and new standard-fit adaptive dampers with a wider range of operation than the 991.

For aero, there are active cooling flaps up front that, when open, also negate front lift. The rear spoiler now has three positions: down, a midrange low-drag ‘eco’ position, and the full-speed full-up setting that keeps you earthbound as you approach the light-aircraft top speed. The spoiler is beautifully integrated when down, but when it rises, it looks like the whole arse is falling off. Oops.

There’s power everywhere. This engine doesn’t explode from off-boost idleness to afterburner force. Neither does it need to graze the redline before vouchsafing its finest. It just pulls, wherever the needle starts from. Okay, there’s little lag in the sub-3,000rpm zone, enough to remind you why the nat-asp predecessors were so addictive. But even so, it’s a definite improvement on the outgoing turbocharged car. 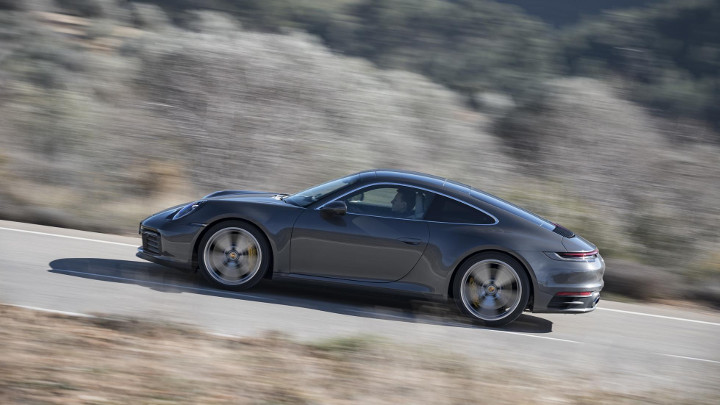 Because the delivery is never really absent, it disguises the strength of its presence. But it really is quick. Not ridiculously or terrifyingly supercar-quick, not quite, but nevertheless properly fast. Use the lower gears wisely and it’ll shove you out of corners, overtake regally, and haul in a straight line like the horizon itself is on the move.

Its sounds leave little missing these days. The 7,500rpm top end is nicely far-fetched for a turbo, and by then, that old flat-six howl is wrapping you like a tempest. Lift off in the mid-ranges and the turbos sigh; let it over-run down through the upper fives and you get that characteristic hollow reverb. 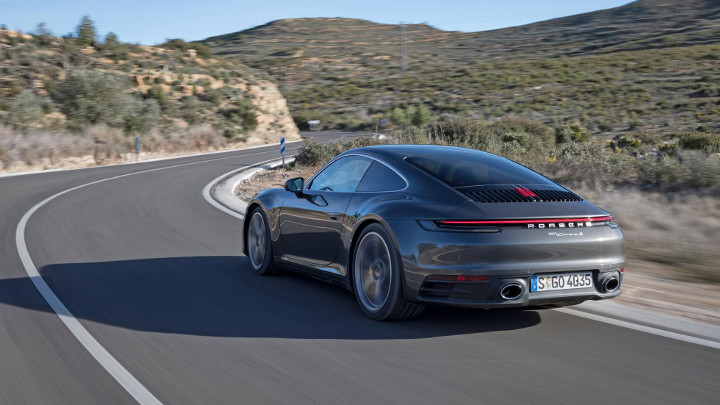 A 911’s engine is, of course, about far more than propulsion. Its position affects pretty well every other aspect of the driving picture. But less so than ever here. Driving the early generations of 911 sometimes felt like shooting the rapids with a big dog jumping around the tail of the canoe. In the 991, the dog moved forward, and if you had the active engine mounts, he sat quietly down. Now, he’s pretty much sedated.

The engine hasn’t moved forward again, but the position of the mounts has, which improves their control over the engine’s oscillations in the shell. It pacifies the ride and steering, gives them a purity more like a mid-engined car’s.

There are exponents of the old-school 911 that tell you managing that mass was part of the game. Maybe so, but it could feel like jeopardy. The 991 and more so the 992 swap that for reassurance and precision.

A seven-nation army of technology lines up alongside you at every bend: adaptive damping (‘PASM,’ standard), electronically controlled diff (standard), adaptive anti-roll (‘PDCC,’ optional), rear-wheel steering (optional), adaptive engine mounts (with the Sport Chrono pack). But it feels natural. The front tires find colossal purchase, and the car pivots about its middle, flat and secure and agile, deep into the bend. The steering is faster than it was, but not twitchy-quick, and sometimes if the corner is tight, the rear axle’s steering just brings it more eagerly around the arc. All the while the sensations flow and tingle.

The steering is telling you a little about the grip—nearly always in surfeit—and more about the changing weight over the tires as you ride dips and crests. The well-loaded rear tires can accept power ridiculously early in a bend, of course, but if you have the traction control in Sport, they’ll also glide gracefully outward. And then the steering weight magically guides you toward opposite-lock. That’s always been a 911 thing, and again, its vestige remains.

Now, Carrera 2 or 4? The 4, in the same spec of major options, does have slightly heavier, more masked steering. Slightly. It also has more traction in the wet, but the 2’s stability controls are so magical (and there’s ‘wet mode’ now, too) that it’s hard to see you’ll need it. The 4 will still act rear-drive and do a power slide, but the 2’s all-round capabilities overshadow the need for the 4. 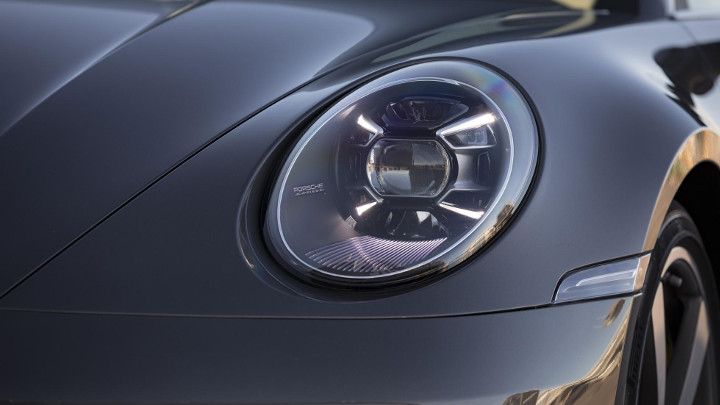 If you want security on a wet winter’s night, you might well be better served by spending £2,000 (P137,960) on the optional matrix LED headlights rather than £5,ooo (P344,900) on the four-wheel drive. Our test cars had the optional ceramic composite brakes, too. For road driving, the pedal is a bit eager at the top of its travel. There’s little wrong with the stopping on Porsche iron brakes, but of course, the iron ones would add unsprung weight and put some jiggle into the ride.

As it is, the ride is taut but not sharp, controlled over big stuff, and, in the standard mode, remarkably placid in its secondary vibrations. This is all very comfortable for a sports car.

At a cruise, the engine goes quiet, the big tires are more hushed than you’d expect, and all is stable. Wind rustle is a bit of an issue, though.

For a borderline supercar, practicality is the 911’s key trick. You can see out of it, and the front cargo space, which isn’t all that huge, is supplemented by a big space below the rear window. And there’s more on the folded rear seats if the two primary-school kids they can accommodate have vacated them. 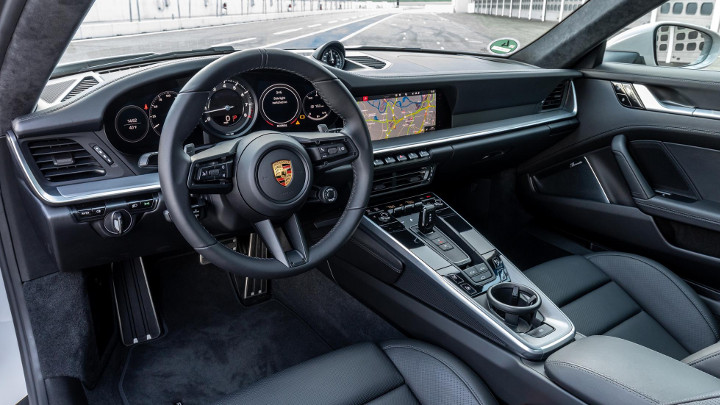 It’s a high-quality item, well on par for a £100,000 (P6.9 million) German machine. The leather is neat, the materials mostly feel genuine, the screens are high in responsiveness and resolution. Where switches haven’t been replaced by the screens, they’re nice knurled jeweled jobs.

The rev counter is real, but it’s flanked by two sets of apparent dials that are actually screens, available to show a panoply of data: engine readings, navigation, trip, g-meters. Pity that the outermost two, including the one that carries the fuel gauge, are usually hidden by the wheel rim. 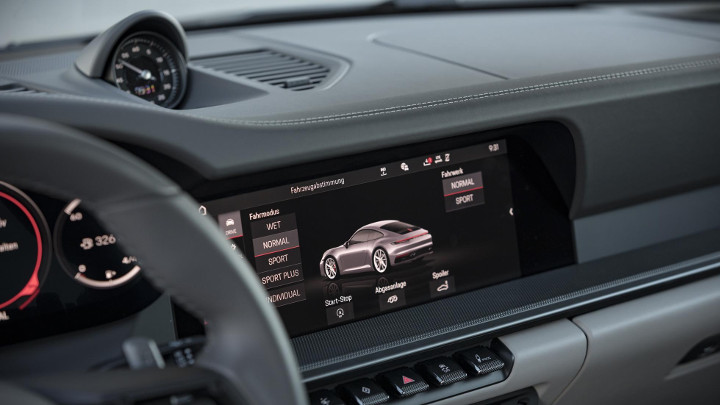 A big central touchscreen carries pretty comprehensive infotainment and car settings. It’s mostly super-slick. But it carries so many possibilities, some too deeply hidden. Again, Porsche argues you can configure frequent actions onto soft keys, but soft keys aren’t as good as hard keys when you need to do some sports-car stuff in a hurry, like switch off some of the many driver assists, or liven up the sports exhaust. Most sports cars do what Porsche used to, and group those switches near the transmission lever.

That’s another reason to go for the Sport Chrono pack—it bring not only the active engine mounts, but also a shortcut rotary mode controller on the steering wheel. That way, you don’t need to go jabbing at the screen when a sudden reason appears to sharpen your 911’s reflexes. 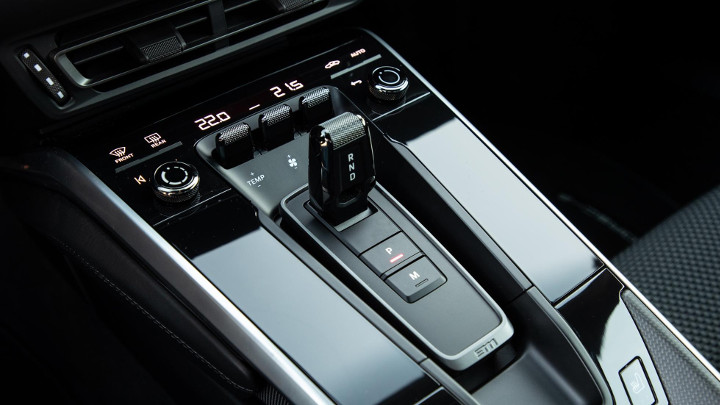 Cabin trim choice is pretty broad, including a lovely woven leather. Pair it with some little accents of matte wood for a dose of 1963.

Everyone likes to do the sums over owning a 911. It’s not cheap, because buying and maintaining isn’t, but it’s predictable, and it’s always good to know you’ll find a buyer for it at the end. 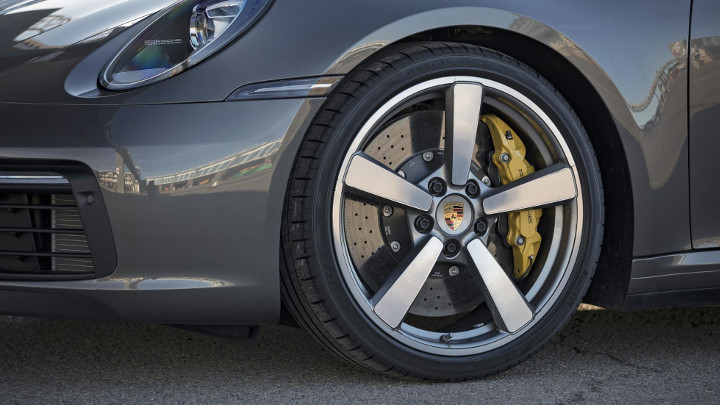 The standard spec is now pretty full. It includes adaptive damping, electronic LSD, LED headlights, and connected navigation. You probably want to add the sports exhaust and Sport Chrono pack. There are dozens more high-tech options. Get yourself over to the web configurator and be led into temptation. Driver-assist systems on the options list include active cruise, lane-keeping assistance, and even night vision.

The new 911 adds both speed and grip, but also even better balance and neatness to its handling. The turbo flat-six now has an energy and charisma few at the price can match.

But its daily-use and touring capacity has grown, too, showing a comfort and a range of useful technologies that put it alongside mere sportified sedans.

The 911 is still definitive, stretching the poles of a sports car’s abilities without putting a foot wrong. 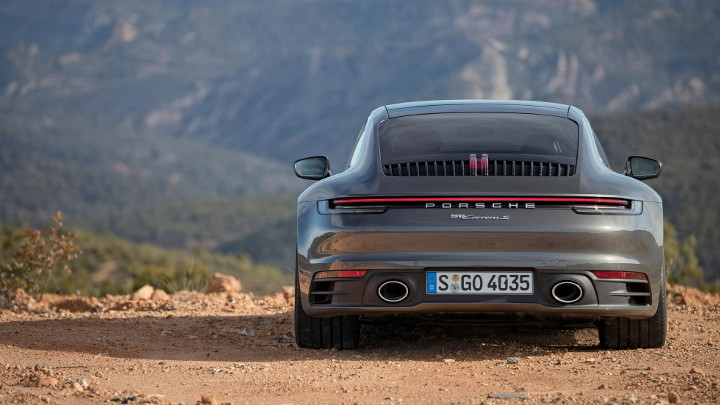 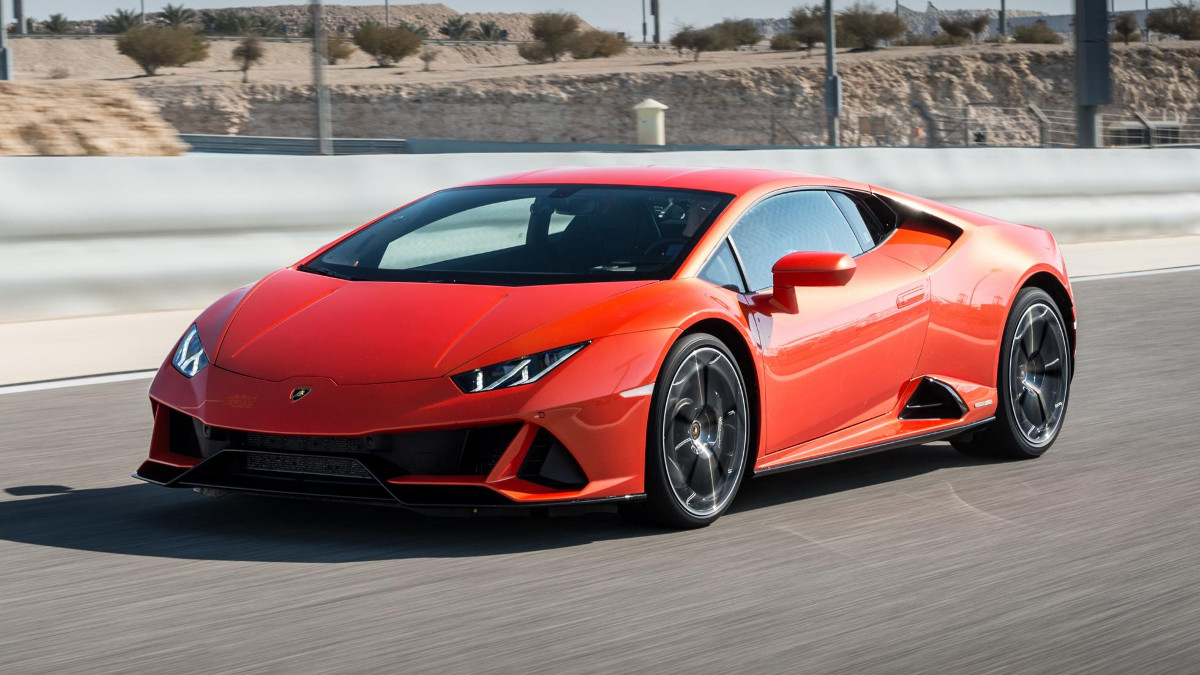