Review: The i4 isn’t quite the ultimate driving machine, but it’s a proper BMW

The future of electric Bimmers is looking promising
by TopGear.com | Oct 16, 2021
CAR BRANDS IN THIS ARTICLE

On the face of it, this is a mighty attractive idea and an easy thing to describe: an electric 4-Series Gran Coupe. Although to be truthful, it’s not exactly that.

It has a different floor, suspension, and even seats, all to fit around the electric bits. And it wears a new dash that’s on trend with the enormo-screen experience beloved by fashion-forward electric-vehicle buyers. By which we mean the Tesla Model 3 and the Polestar 2.

Yup, the i4 has in its sights those low-slung, fast, but not-ridiculously-unaffordable electric cars. Prices for the rear-drive i4 eDrive 50 start at £52,000 (P3.6 million), for a zero-to-100kph under 6sec and 587km miles of electric range.

But aren’t ‘performance’ EVs supposed to tear your face off? 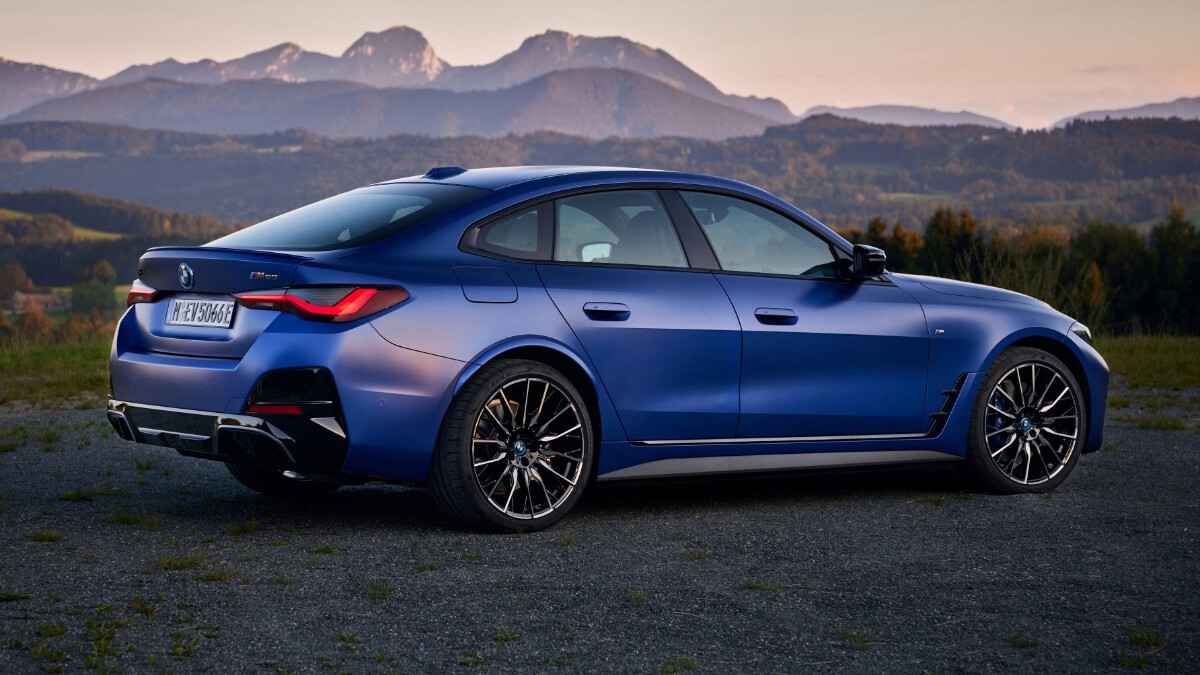 We tested the M50, and yes, it’s startlingly rapid, especially so if you’ve double-pressed the mode switch into ‘sport boost’. A fairly po-faced name compared with Tesla’s ‘ludicrous,’ but it’s effective. While most electric cars seem to run out of enthusiasm once you’re broaching typical highway speed, this one keeps forging ahead into autobahn territory. It’s limited to 225kph and can get there in quite some hurry. That’s partly due to the design of BMW’s motors, which have no permanent magnets. That also means they use no rare-earth metals.

Yet to be honest, we’re still not sure the M50 is the optimum i4. Sure, it has frankly brutal acceleration and grip, especially as the test car had optional 20-inch wheels and tires. But perhaps in pursuit of all that, it sacrifices the delicacy and feel of the best of BMW’s cars. Maybe rear-drive and slimmer tires will open up a new side to its character.

What about those screens? 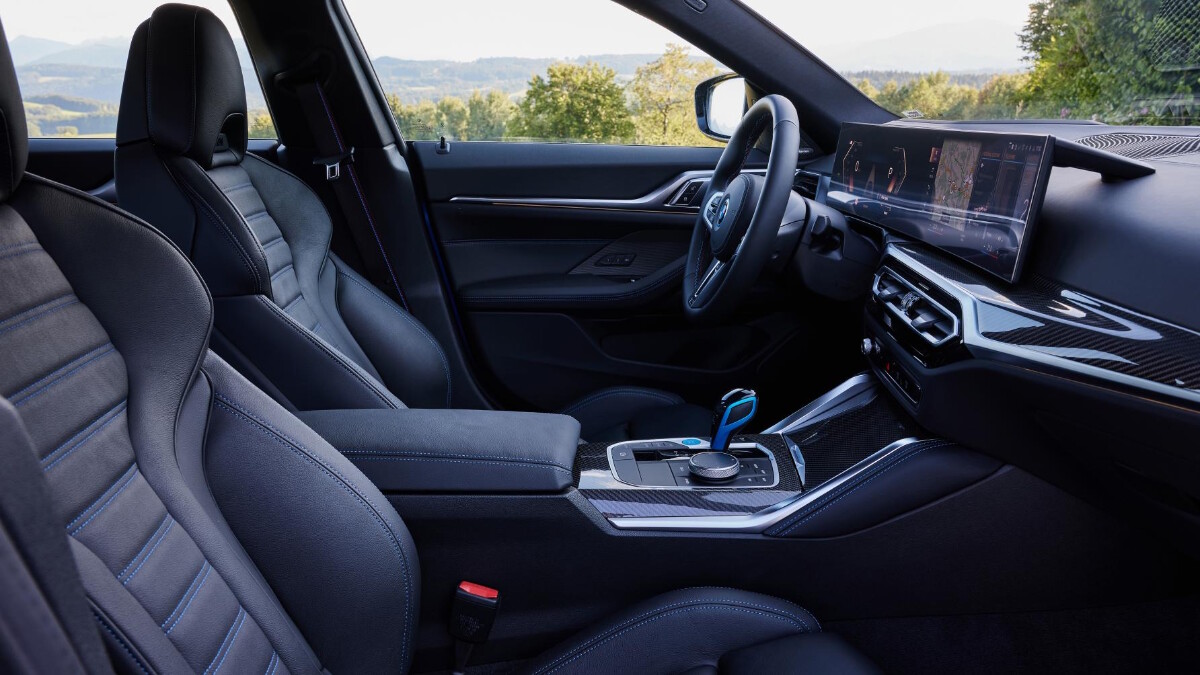 The i division’s airy, new-materials openness, as seen in the i3 and the iX, doesn’t show up here. The i4’s cabin is pretty much what we expect from a BMW sports sedan. Well, five-door hatch, actually.

Apart from the new display system. Which is a pair of curved screens joined under a single glass sheet, bracketed proud of the dash itself. The screen system itself works well, and you can configure it with multiple options. There’s also an iDrive controller wheel. But most of BMW’s other shortcut buttons have been banished. So, there’s no longer one for the driver aids, and that’s a right pain.

How many EVs will BMW make? 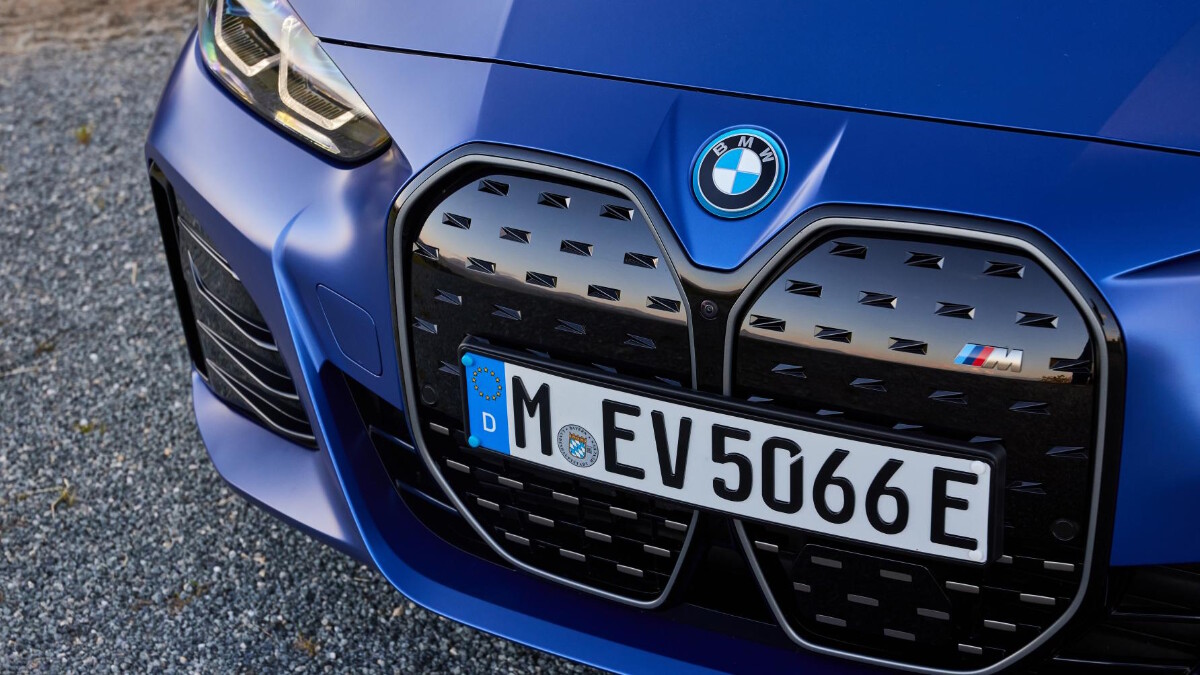 Loads. We’ve seen battery versions of the regular cars—Mini, X3, and now this, which looks like a 4-Series. There are EV versions of the 3, 5, 7, and X5 in the works. But there are also the specialist all-in EVs, the i3 and the iX. From 2025, there will be a new batch of EVs called the Neue Klasse, with long range thanks to their batteries being built into the structure, and heavy reliance on recycled metals.

Still, traditionalists can take heart: The company is also developing another new generation of combustion engines for intro the same year. 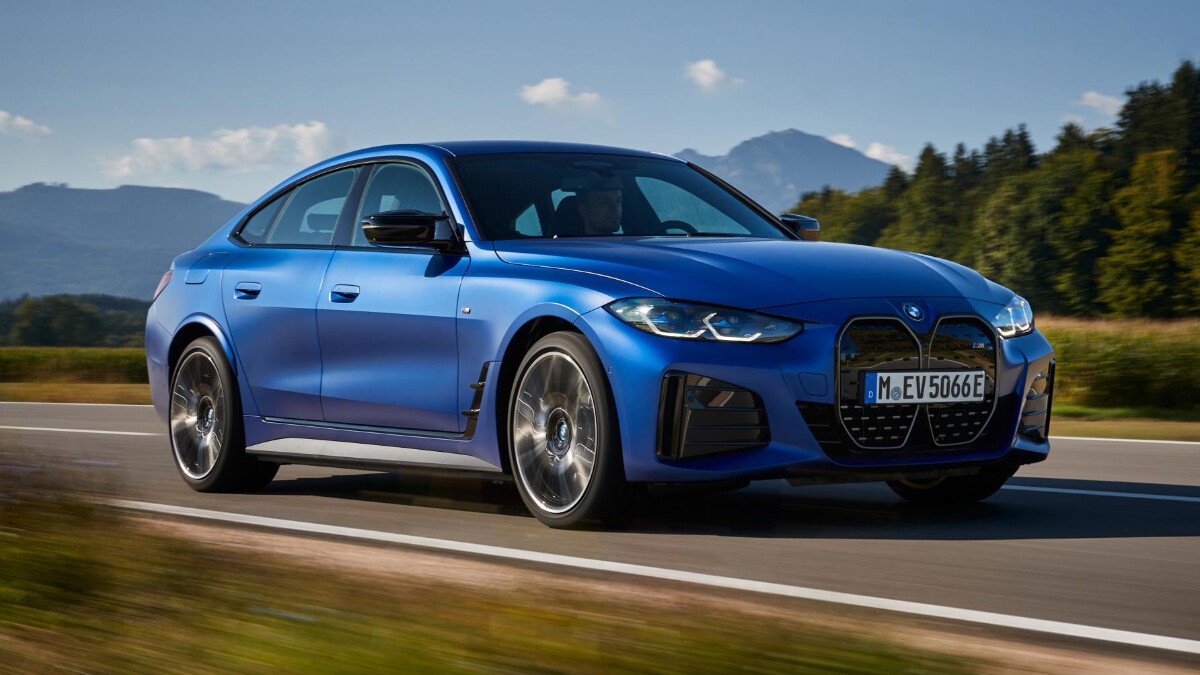 The M50 is seriously rapid. It bolts off from a standstill. It blasts ahead when an outside-lane blockage clears. It’s a warp module for overtaking. Lots of cars are rapid-accelerating after they’ve spooled up, but in a quick EV, the spool-up time is zero. You need to look a long way down the road, or you’ll be there before you know it.

A setting called ‘sport boost’ unleashes all the power (not just a quicker accelerator map) and increases the volume of the sound synthesis...which is a ‘composition’ from film-score mogul Hans Zimmer. In normal traffic, you’ll be happier driving the i4 in one of its milder modes, wherein it’s smooth and easy to dawdle. 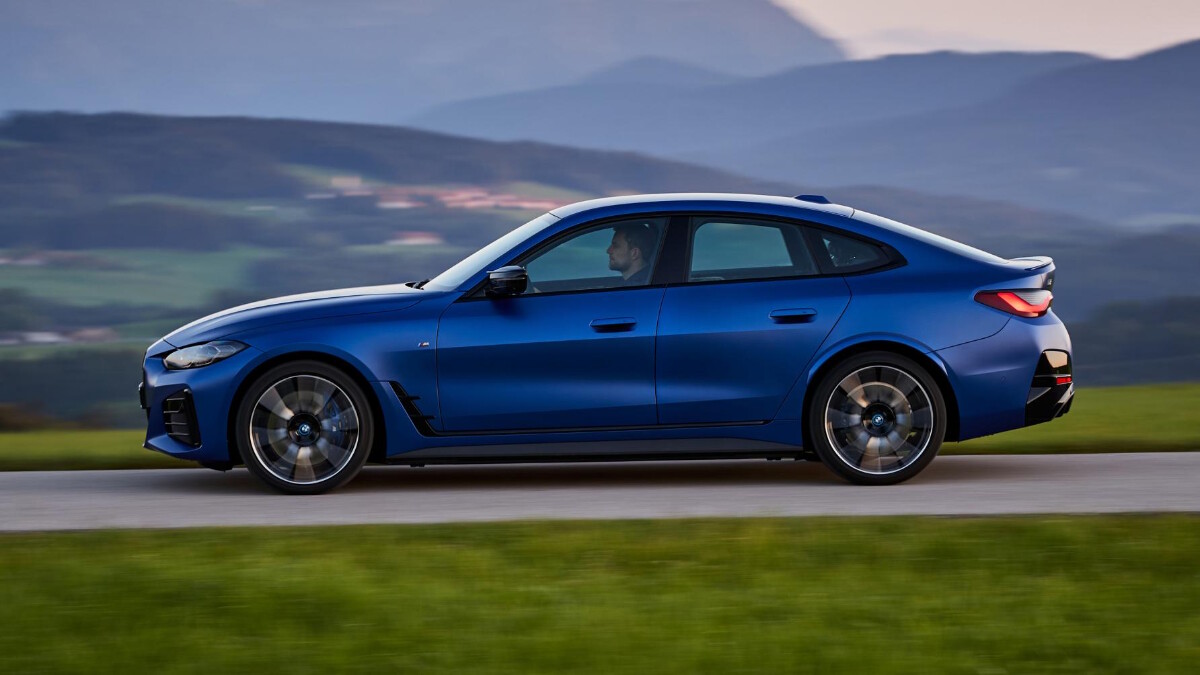 Because it’s AWD, the M50 can use huge regeneration—up to minus 265hp—and still keep a workable front-rear brake balance. You can opt to get that regen from lifting off the accelerator. But this gives the right pedal too much to do, controlling all that positive and negative longitudinal g.

So, Top Gear turns off one-pedal driving and uses the actual brake pedal to do the braking. Crazy unconventional us. It’s no less efficient: The brake pedal invokes the discs only when it’s beyond the point of maximum regeneration. Unfortunately, the pedal is too sharp, unprogressive, and short on feel.

Not much feel bubbles up from the steering wheel, either; it has an accurate but glutinous action. Adding a false weight via the sport menus is no help. But it can sure summon immense cornering force. Not much happens to the attitude of the accelerator mid-way. The front-rear torque-vectoring and the traction control system act blindingly fast and smoothly, but at road speed, they don’t exactly play it for laughs. 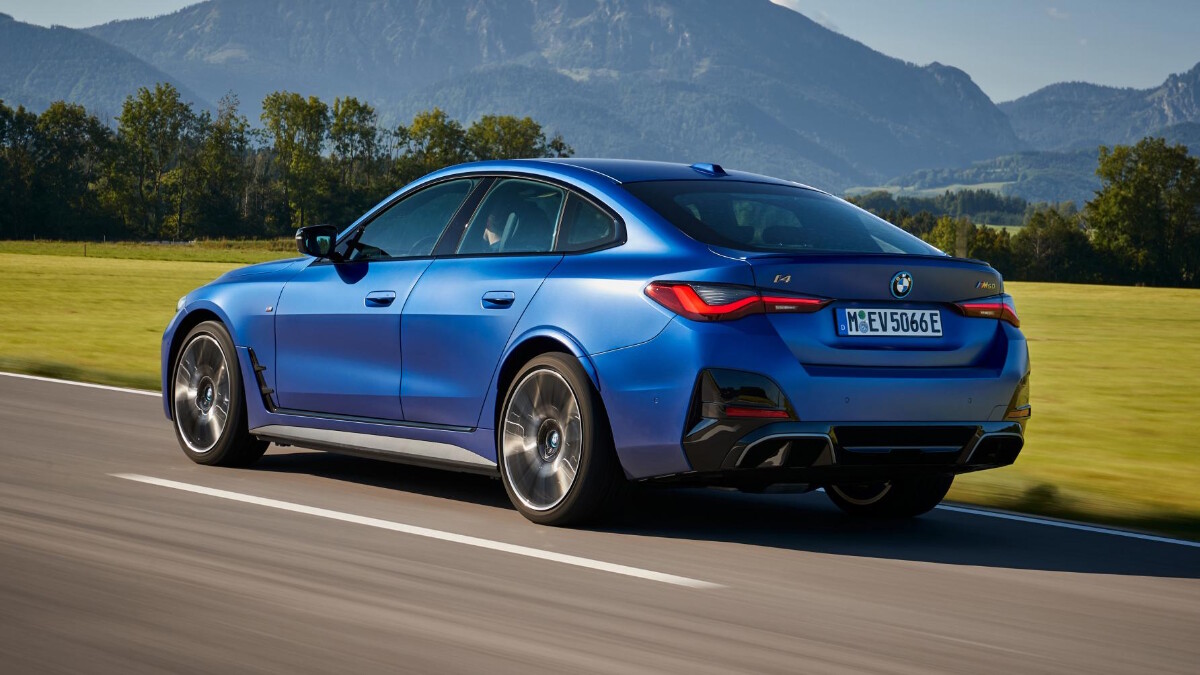 The M50 has self-leveling air suspension for the back wheels, and adaptive dampers. The whole system is well-programmed for a sporty but tolerable ride, easing off the sharp edges of small potholes and ridges.

The i4 gets all of BMW’s latest driver-assist gadgetry. It works well, but is sometimes too keen. For example, on a twisty single-carriageway, the lane assist (which defaults on when you start the car as they all must by law these days) knocks you away from the smooth line. And it’s a distracting pain to switch off, as we’ll see in the interior section. 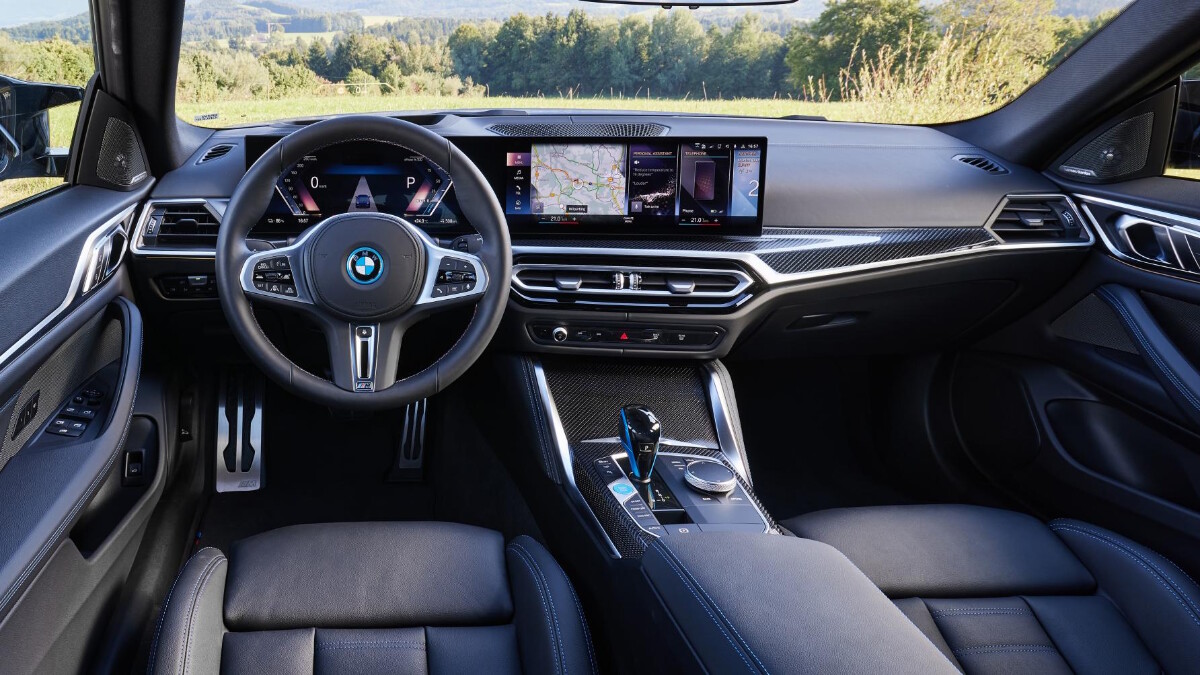 Thick consoles and complex door cards make the i4 wrap around you like generations of midsize BMWs always have. It puts you in the right mood by looking like a driver’s machine. The materials are smart and built with care. The seats are human-shaped, without too many fussy adjustments.

The driving position is good, but not as flawless as in most BMWs. For many of us, the steering wheel cuts off your view of the top of the instrument screen unless you sit low. That’s okay if you have the widescreen head-up display that’s standard on the 50i.

But if the driver does sit low, the passenger in the back will have nowhere to put their feet because they’ll be squeezed between the driver’s cushion and the battery. The middle passenger is worse off. This isn’t a flat-floored EV; there’s a tunnel that carries cabling. Behind is a decent-sized trunk and the seats fold. But there’s no frunk.

Tell me about the new iDrive. 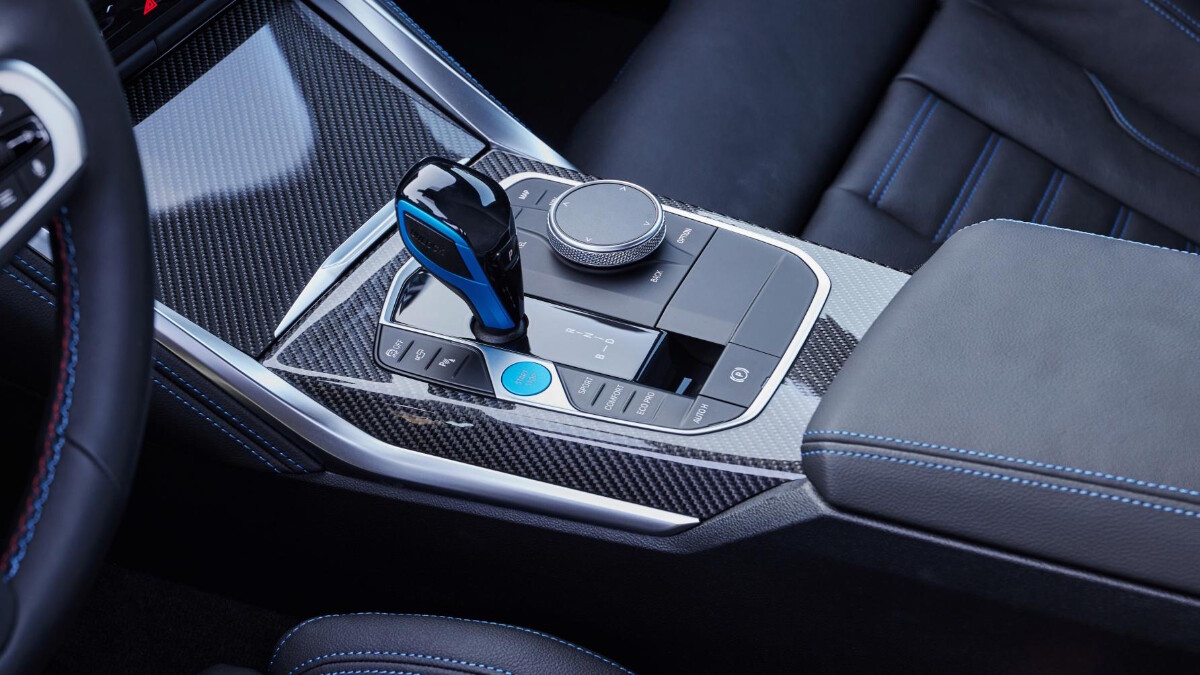 The screens are quick-acting and have high resolution. The system is pretty versatile. It integrates deeply with your phone, showing Apple or Google maps in the head-up display if you want. You can configure what info appears on the screens, and also set up soft-key shortcuts. But they’re not as good as the physical shortcut buttons still used on gasoline and diesel BMWs. There’s no button for the driver assist, so you’re left jabbing at the screen for too long.

‘People are used to using tablets and phones’ say BMW. But that’s on the sofa or on the train, when they can give it their full attention. Not when they’re trying to control a bouncing car at 100kph and should have their eyes on the road. 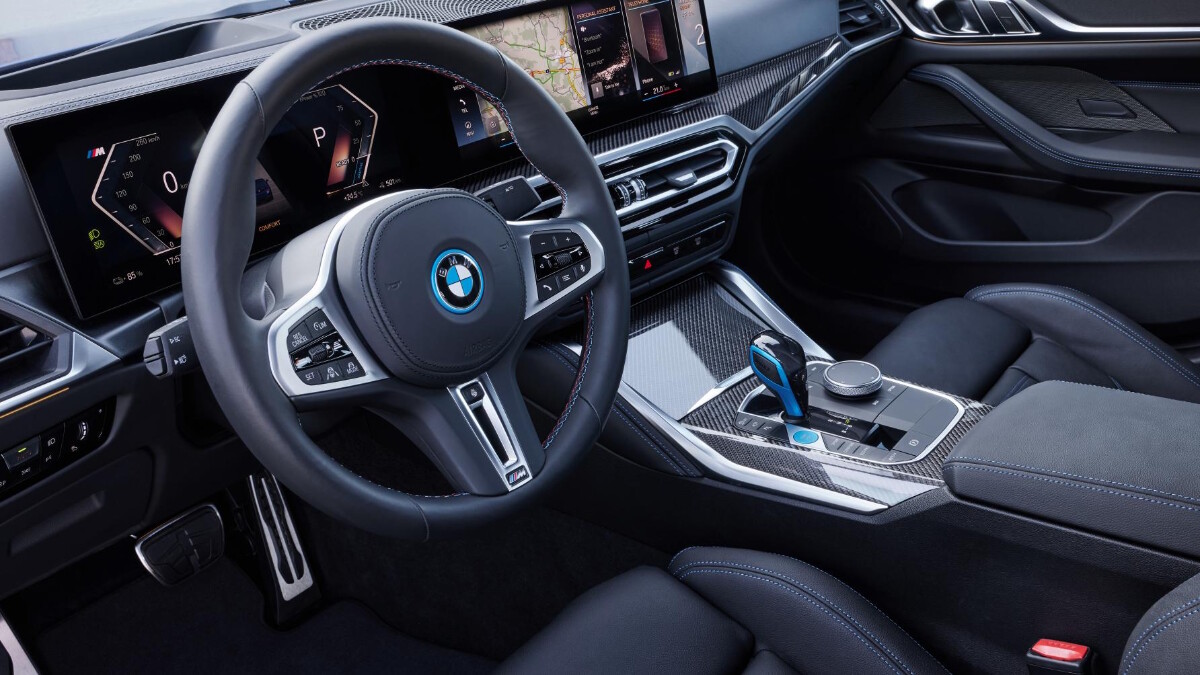 Ah, well—most functions can still be controlled by the iDrive wheel, which works well for scrolling and zooming, if less well for menus. You can talk to the car, too, if that’s your thing. But the voice control can’t make the car do many of the things the absent switches could do. For instance, turn off lane assist.

And no, three years after it arrived on the X5 and every BMW since, we still haven’t got used to the strange polygonal speedo. 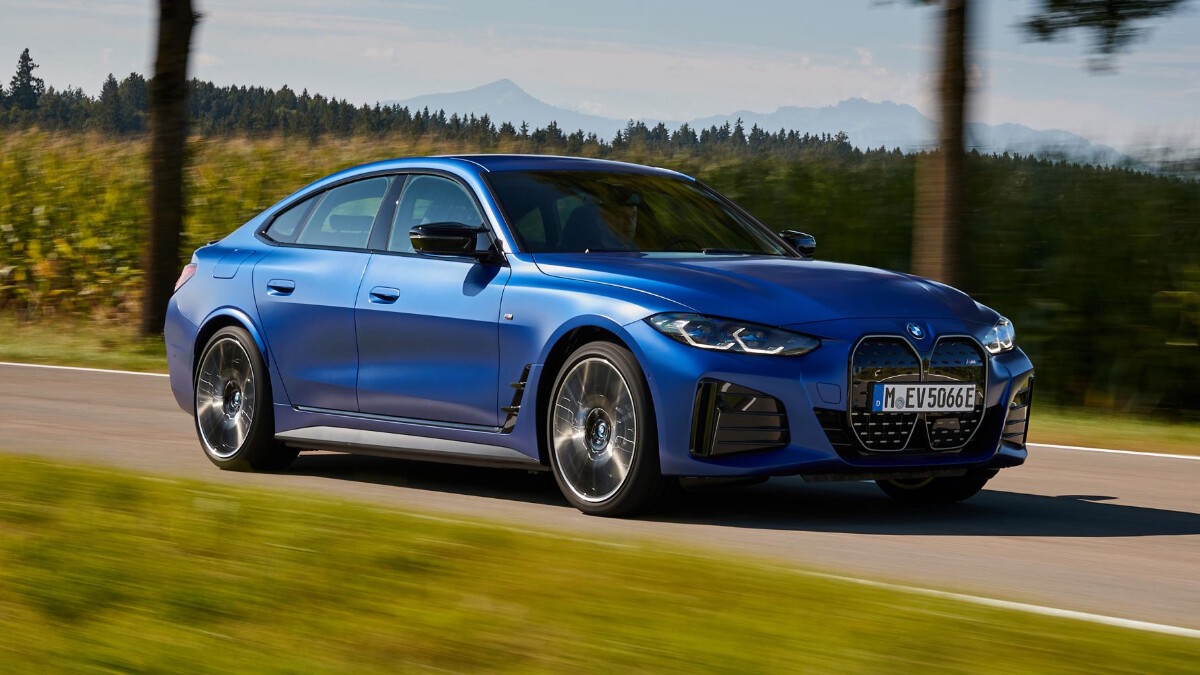 We like the Tesla Model 3 and the Polestar 2, but there’s still a vacancy for a really sweet-driving alternative. In the tested spec, the i4 is a better steer than they are, but not by as much as we hoped. The new interface is a mixed blessing, but otherwise, the cabin has all the qualities of a typical BMW. It’s snug and well-made.

Meanwhile, this is a car with the sort of range that should allow almost anyone to do almost any of their road trips. It charges fast, and brisk driving or low temperatures don’t harm the range as badly as in some EVs. And it doesn’t look like a spaceship, but lots of people don’t want that. Which is why BMW does so well. This is a proper BMW. 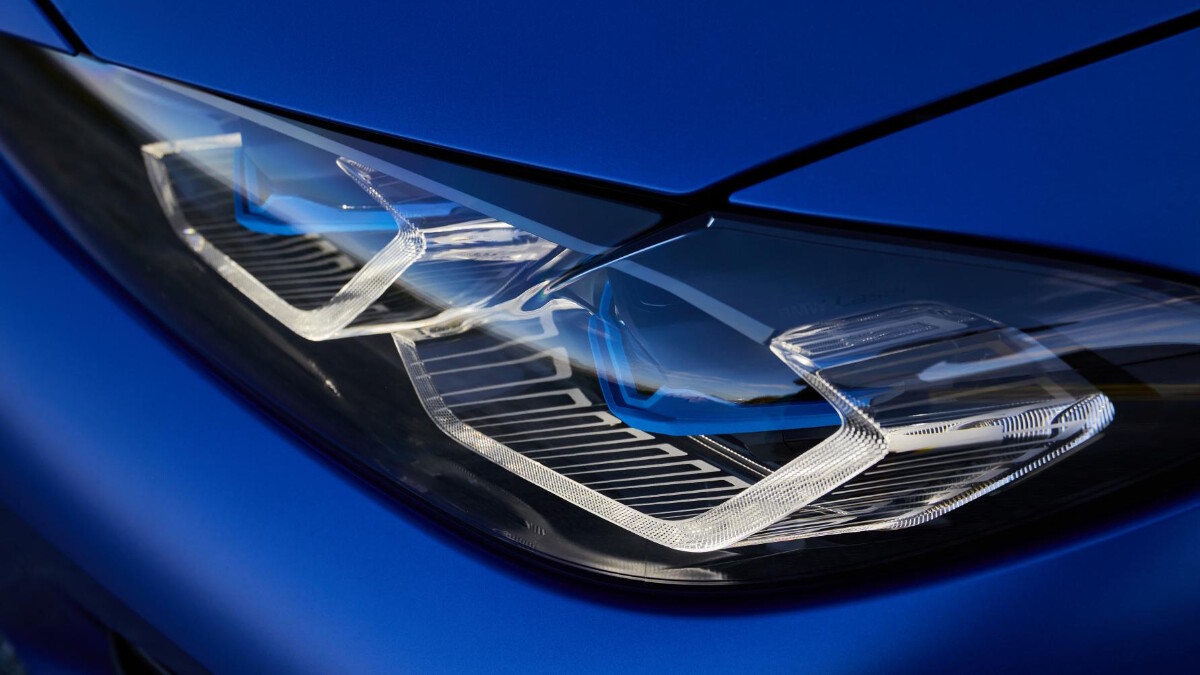 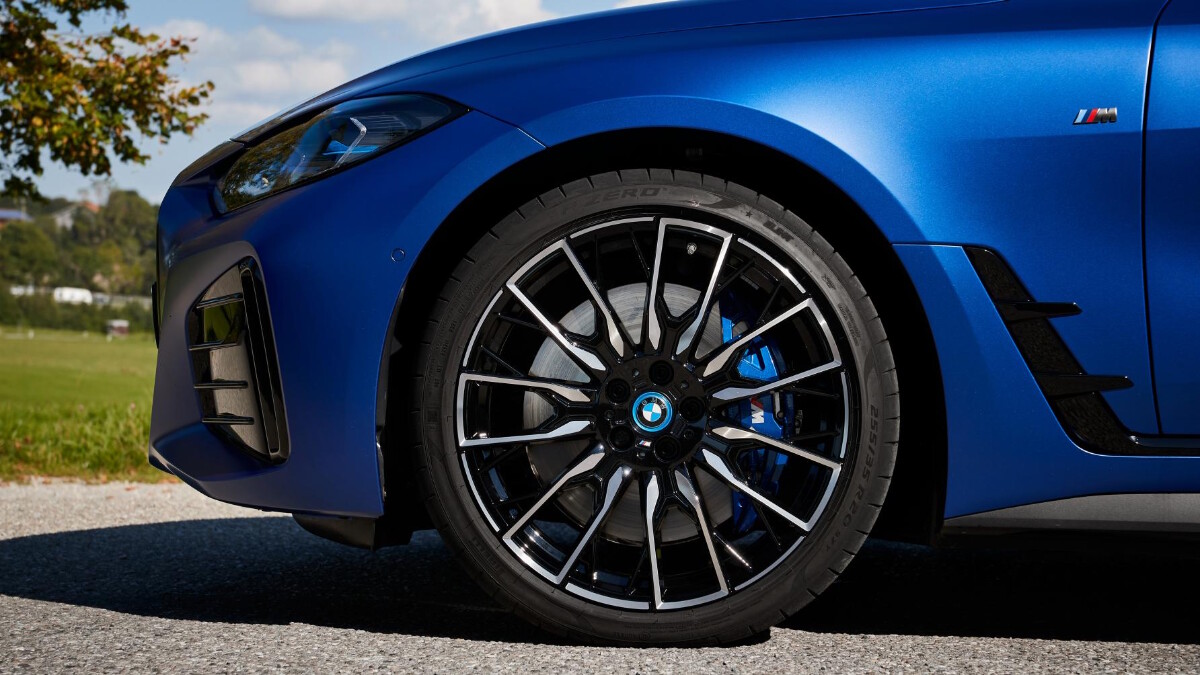 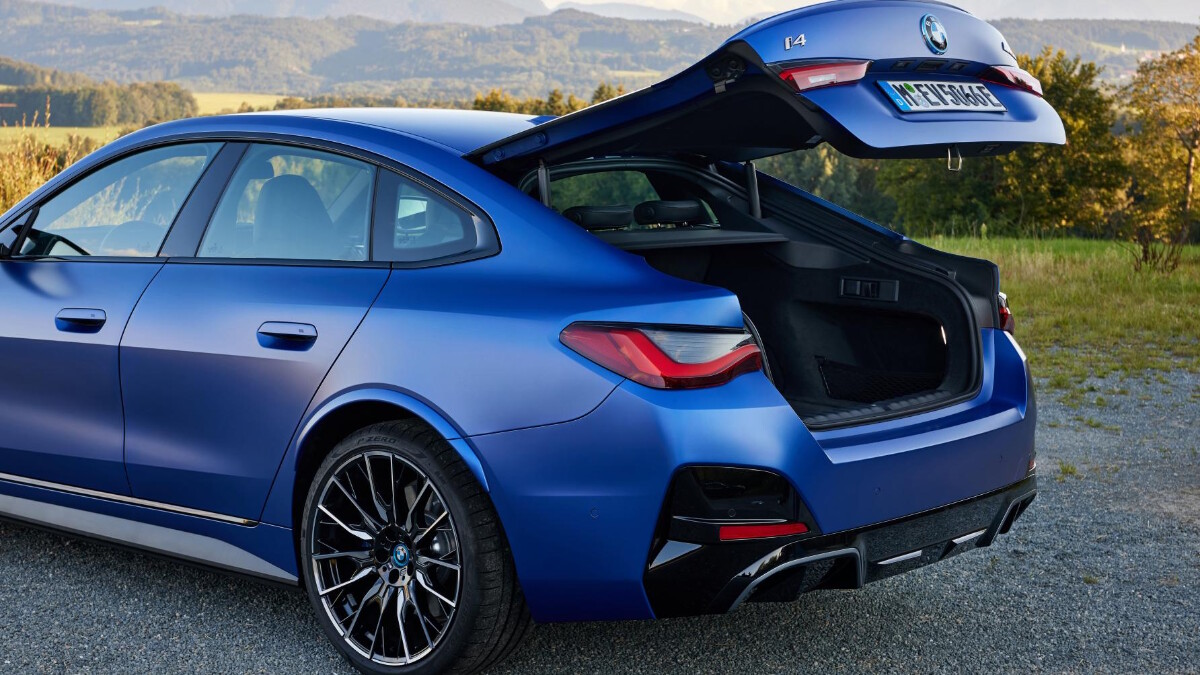 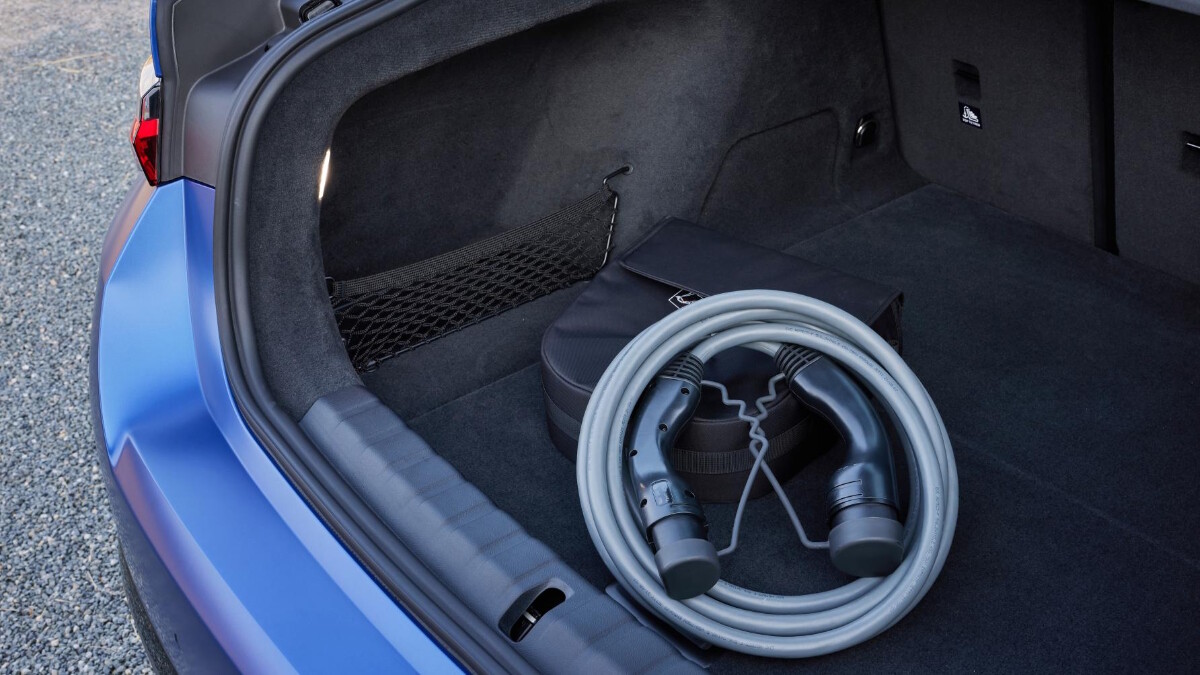 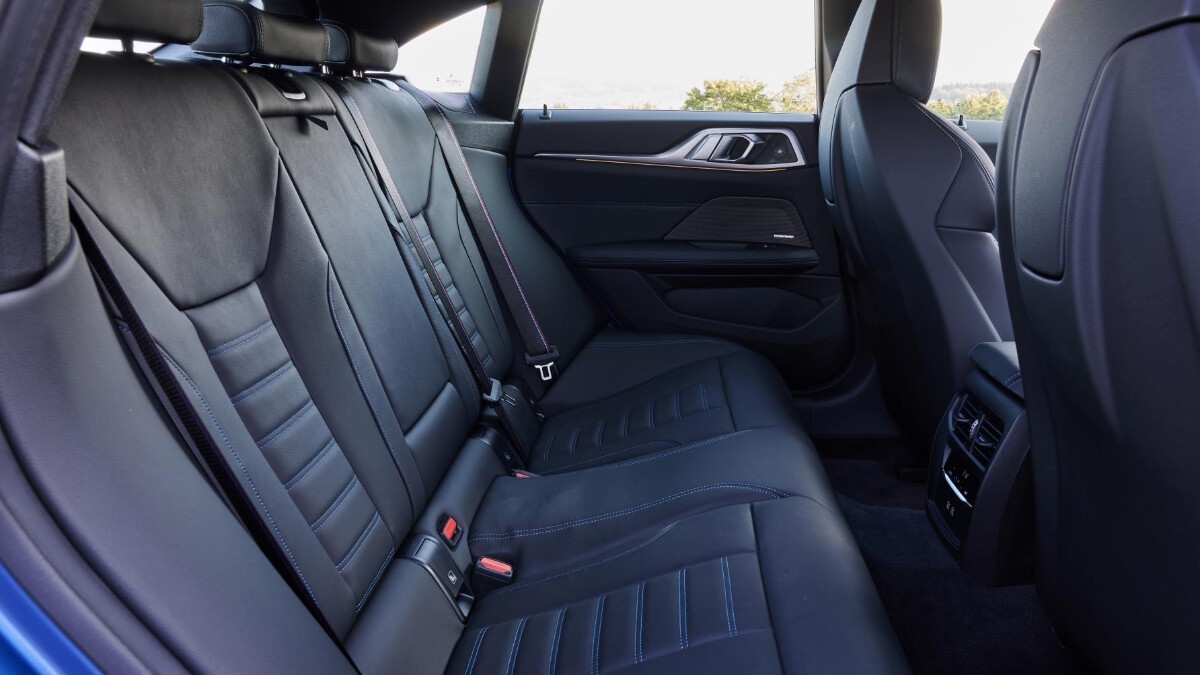 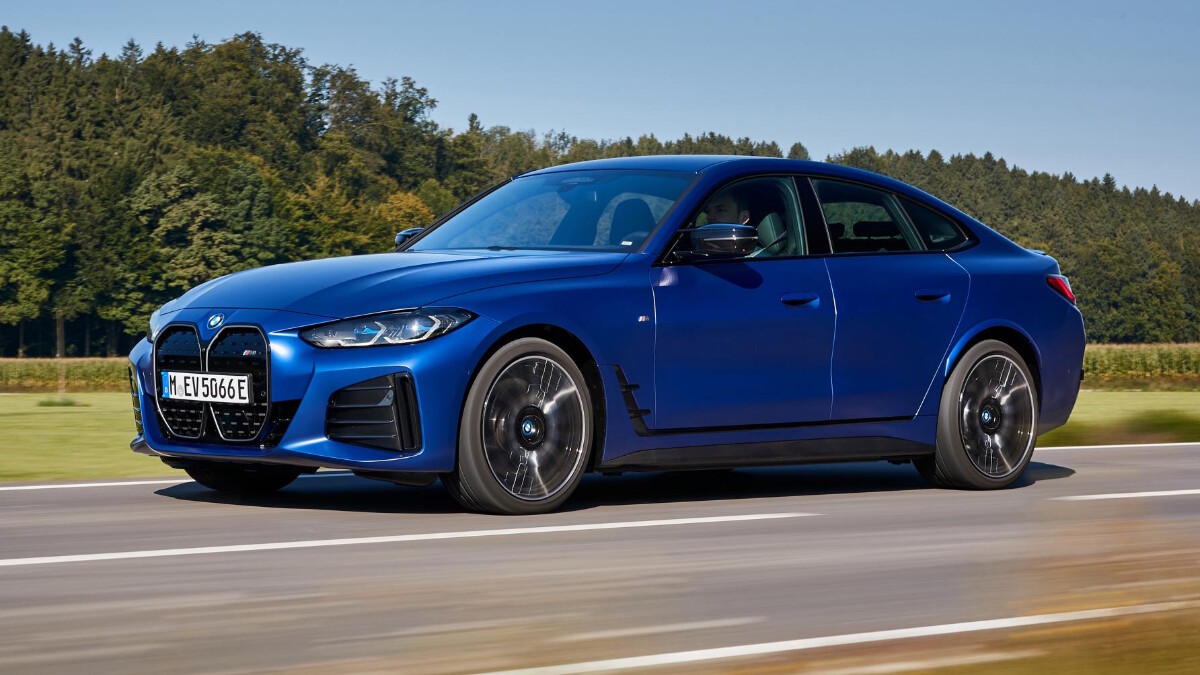 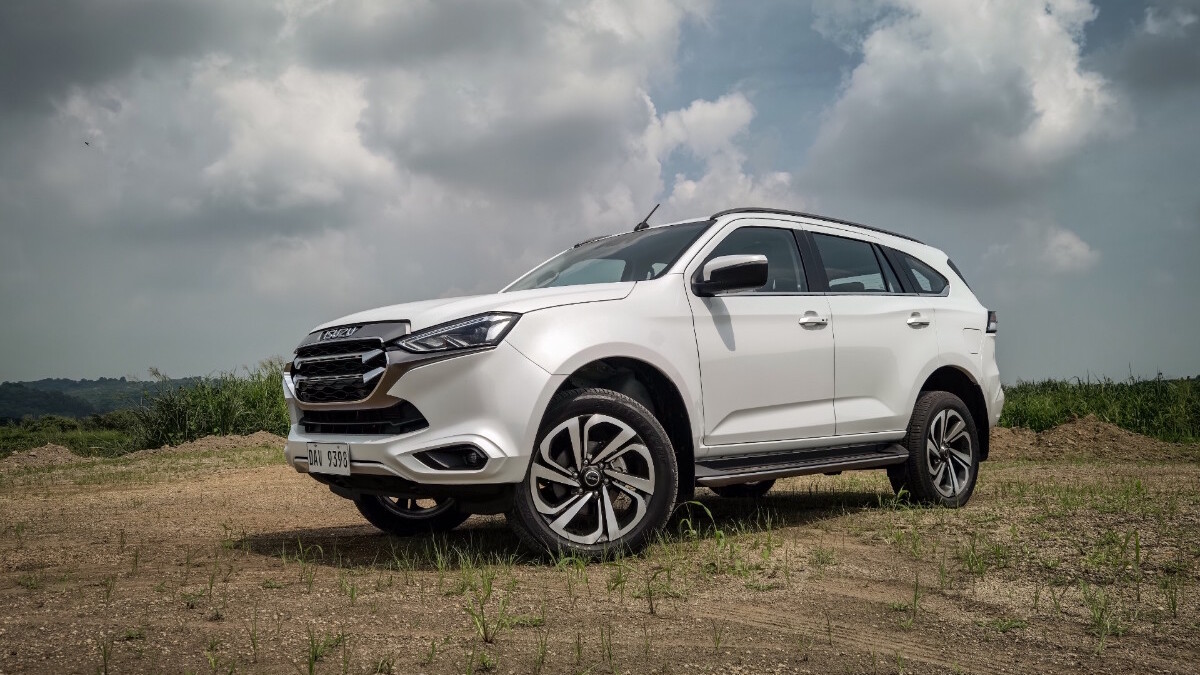 Review: 2022 Isuzu MU-X 3.0 4X2 LS-E AT
View other articles about:
Read the Story →
This article originally appeared on Topgear.com. Minor edits have been made by the TopGear.com.ph editors.
Share:
Retake this Poll
Quiz Results
Share:
Take this Quiz Again
TGP Rating:
/20