“It’s a right old laugh without ever giving you the scaries”
by TopGear.com | Aug 22, 2021
CAR BRANDS IN THIS ARTICLE

It’s inevitable: There was always going to be a performance SUV from Hyundai’s burgeoning N brand. After nearly four years with just one model in Europe, the superb i30N hot hatch, the South Korean carmaker’s feisty performance offshoot has added another two almost at once. Just as the i20N hot hatch has gone on sale—a healthy waiting list soon following—we now have this, the Kona N.

Not only is it inevitable, though, it’s actually kinda welcome. While the small-crossover crowd is a largely uninspiring place for a car enthusiast to shop, the stock Kona stood out at launch. Not only for its stark, amphibious front end, but for driving uncommonly tidily for its class. Albert Biermann was snared from BMW’s M Division not only to make the i30N (and follow-up Ns) fun to drive, but also to make the rest of the Hyundai and Kia conglomerate’s cars handle with a base level of competency.

Which is precisely what the Kona did, especially in its wholly convincing Electric form. But there’s little semblance of saving the world distilled into this, a car that may be the last N product launched with internal combustion as its sole power source. All hints are that N will soon be electric, potentially making this near-300hp chonk something of an unexpected send-off.

An appropriate one, though? 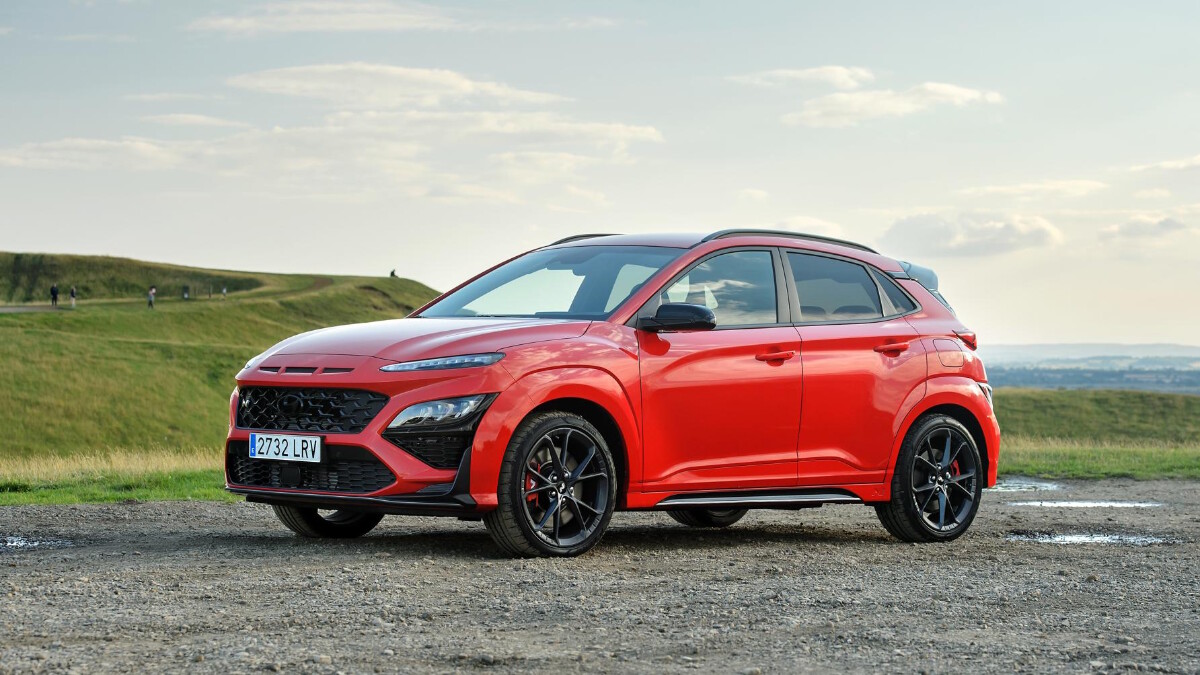 It all looks good on paper. The powertrain from the i30N is squeezed into the slightly smaller (though 50kg heavier) Kona, which means it stays front-wheel-drive. That helps keep weight acceptable at 1.5 tons. A 2.0-liter turbopetrol four-cylinder engine provides 276hp and 391Nm, yielding a 0-100kph time of 5.5sec and a 240kph top speed.

If you’re buying into the SUV world for a pretence of off-roading nous, then supplementary to an N-honed stability control setup is a dial of sand, snow, and hill-descent modes that you’ll almost certainly never use. It sits beside the selector of your only gearbox option: an eight-speed twin-clutch paddle-shifter with launch control and a multitude of extra modes—all with silly names like N Grin Shift—to help spice up the fact that there’s no manual option.

Should I be unduly bothered? 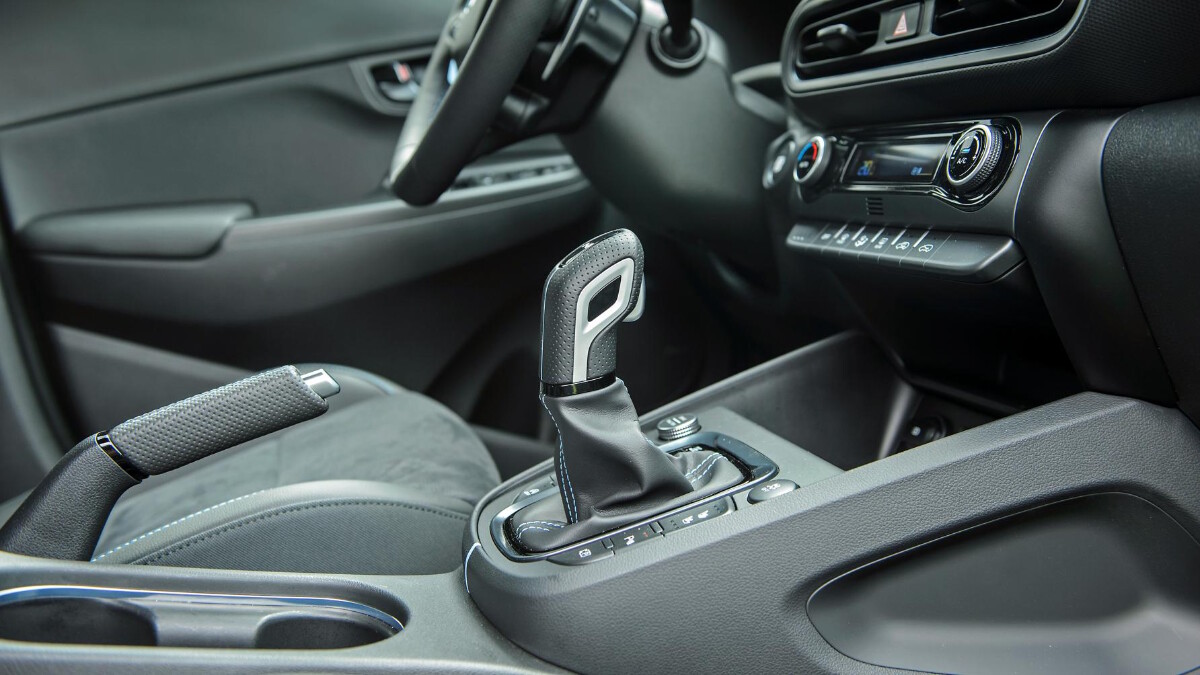 Nope. Ignore the tinsel and this is a genuinely great twin-clutch transmission, one that’s evidently been developed by proper car nerds before having its functions named by marketeers. It shifts quickly and smartly, and is probably more impressive left to its own devices than when you start tugging at the paddles yourself. Leave things alone and you’ve a better chance of eking out fuel economy, infamously an N division weak point thus far. Hyundai claims 194g/km of CO2 and 14.1km/L—expect the latter to fall to around 10.5km/L the moment you get excitable.

The performance SUV may be a modern phenomenon—titchier ones like this, especially—but plenty about the Kona is old-school. Turning the ESC off really does turn it off, and there’s a traditional manual handbrake. And Hyundai has done a proper engineering job on it rather than just pump up the wheel size and drop the suspension. It actually rides no lower than a regular Kona, but boasts additional weld points on its bodyshell and a limited-slip differential as standard. Oh, and it completed 489 development laps (equating to 10,152km) of you-know-where to properly earn that N on the back. It’s a proper job. 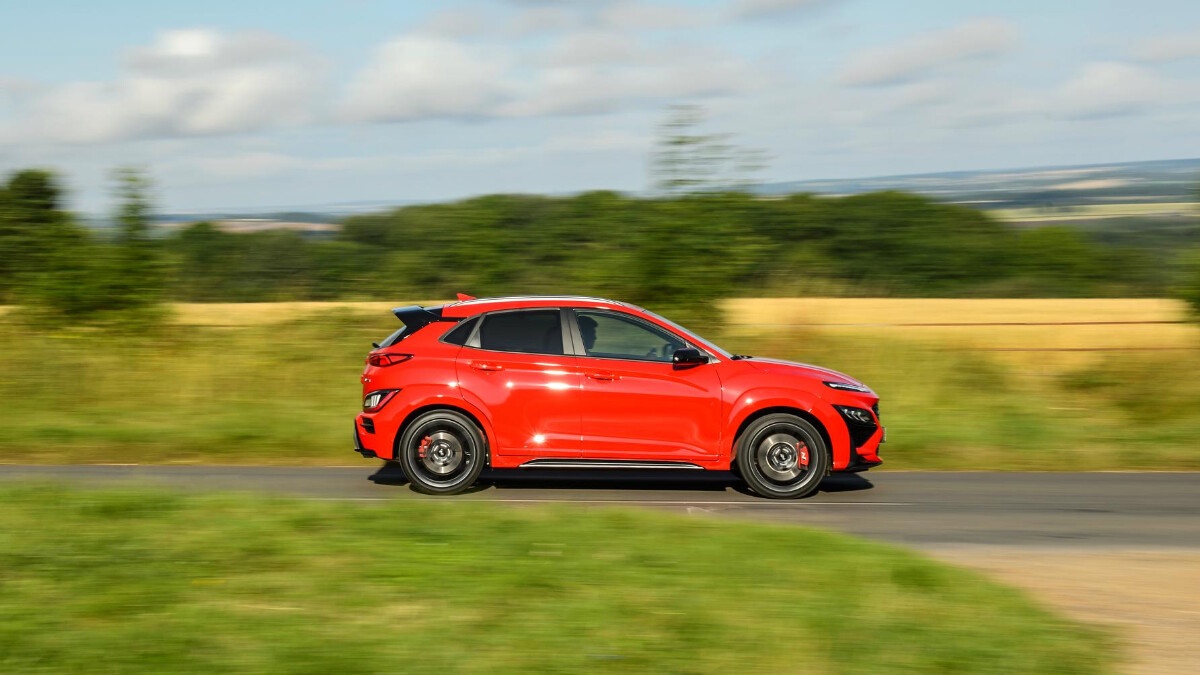 In essence, this is an i30N hot hatch that’s had its wheelbase shortened and its center of gravity nudged up. And it drives just as the recipe suggests: an already roguish character is now even more cartoonish.

The dual-clutch gearbox is a sophisticated item, and with eight nicely stacked ratios, you can potter along quietly and cruise at 2,000pm should you wish. But the powertrain is always gagging to really let loose, and this is a car that falls easily out of its shackles as soon as you start stiffening its suspension or loosening its stability control. 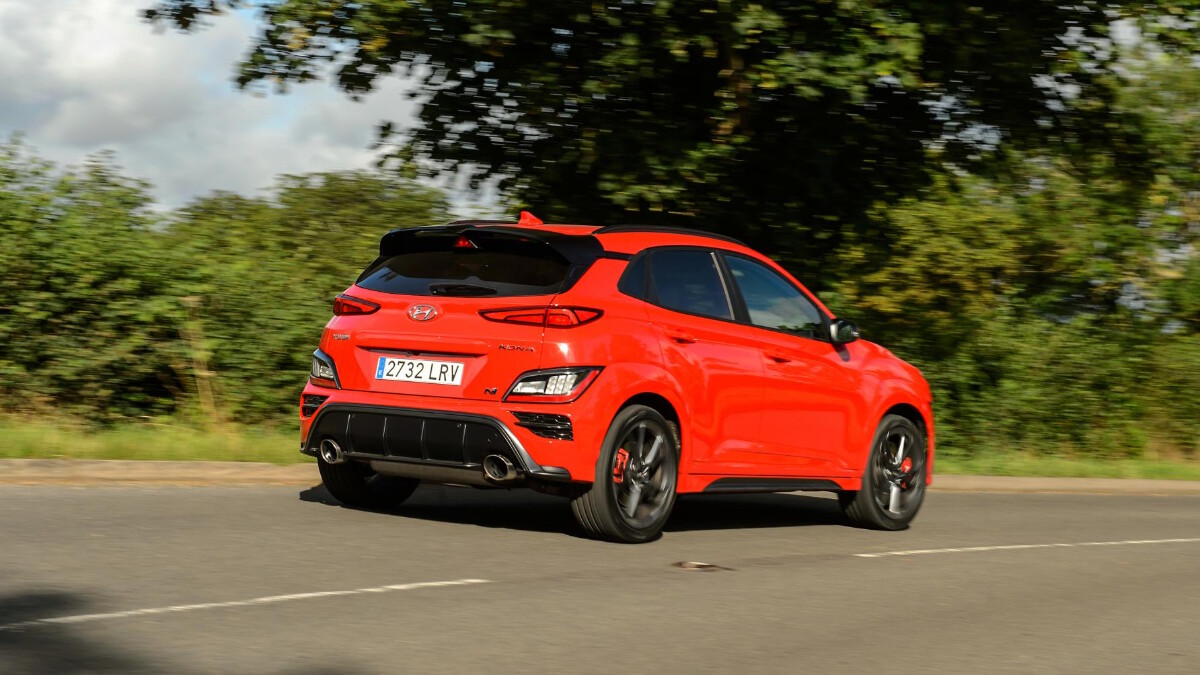 There’s a properly responsive rear end should you lift off the throttle or brake exuberantly into a turn—it’s a right old laugh without ever giving you the scaries. It’s like a boisterous little puppy scurrying across the tiles into the kitchen, with no malice to its excitement whatsoever.

If this all sounds like an irrelevance, then consider that the Kona N’s innate sense of humor really shows up the studious side of its mostly VW Group rivals. Only a Ford Puma ST feels anything like as daft as this, and it’s down by nearly 80hp. 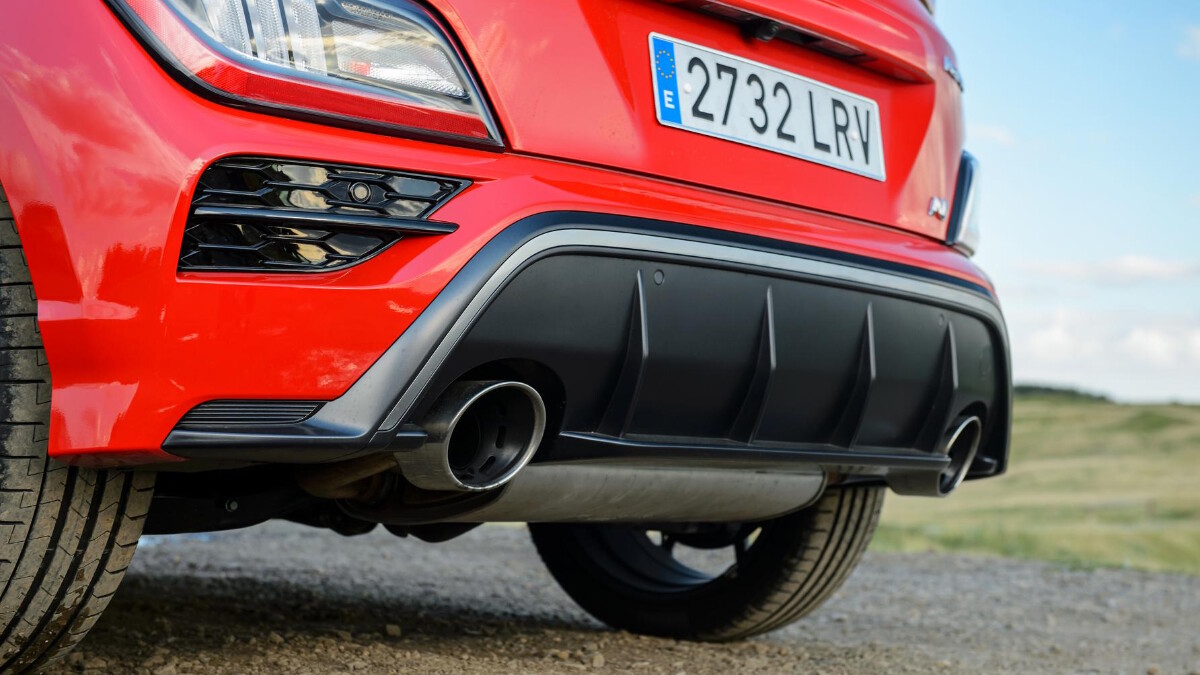 Correct. This is mercilessly stiff, as has been the N Division way thus far. The suspension has three settings, but Normal feels like where the middling Sport ought to be, while Sport+ is something you’ll try once and never revisit, we suspect.

There’s much, much customization possible within the numerous driving modes, but it’s all relatively intuitive and you can corral two favored setups to access with a quick steering-wheel button prod—a prod that the Kona N’s digital dials actually prompt you to do when the car’s forward-facing camera spots a bendy road sign. Told you it was daft.

You’ll want the limited-slip differential in its sportier setting if you’re to avoid torque steer. 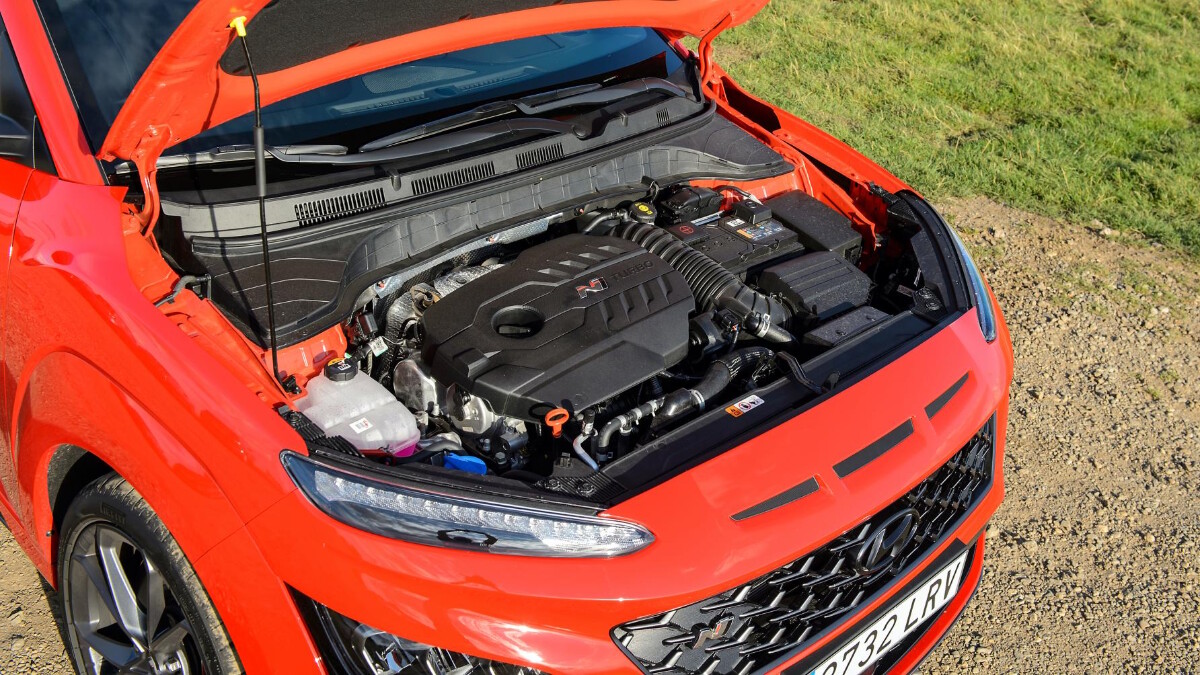 The gearbox has four different levels of ferocity. Left in Drive in its second sportiest mode, you might never need to pull a single paddle, so good is it at changing down into corners and up out of them. A late, impromptu manual downshift is always instant and accompanied with a naughty growl of assertive rev-matching, though, and will make you smile almost as much as if you’d done it with a traditional manual ’box. So don’t abandon the paddles entirely, no matter how plasticky Hyundai has made them. 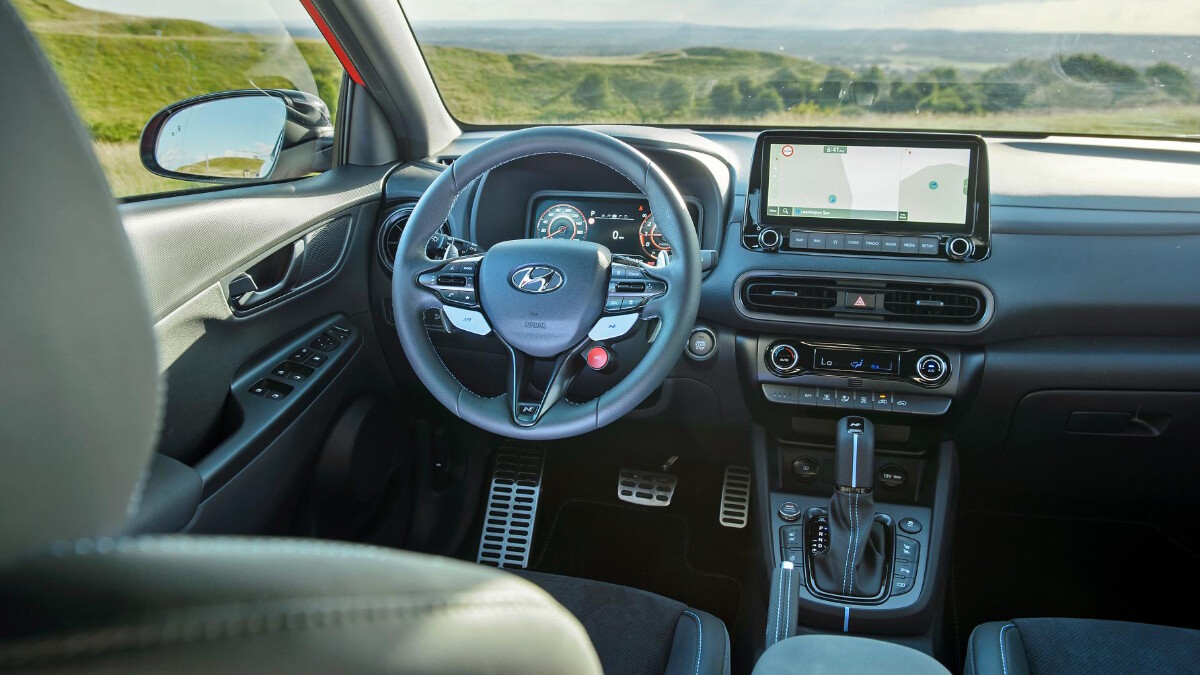 There are digital dials where the i30N’s have remained joyously analog. But at least Hyundai has fully leaned into the infinite world of possibilities they open up rather than just recreating a traditional tachometer and speedometer display as your only real option (ahem, BMW).

So, a chintzy display of flames runs around the rev counter as you start up, and the head-up display looks fully gamified when you’ve prodded the car into one of its gnarlier driving modes, with horizontal revs and a quirky gear display. Handy when you’ve eight to choose from and an engine so torquey, you might have a few more downshifts to make into a corner than you anticipated. 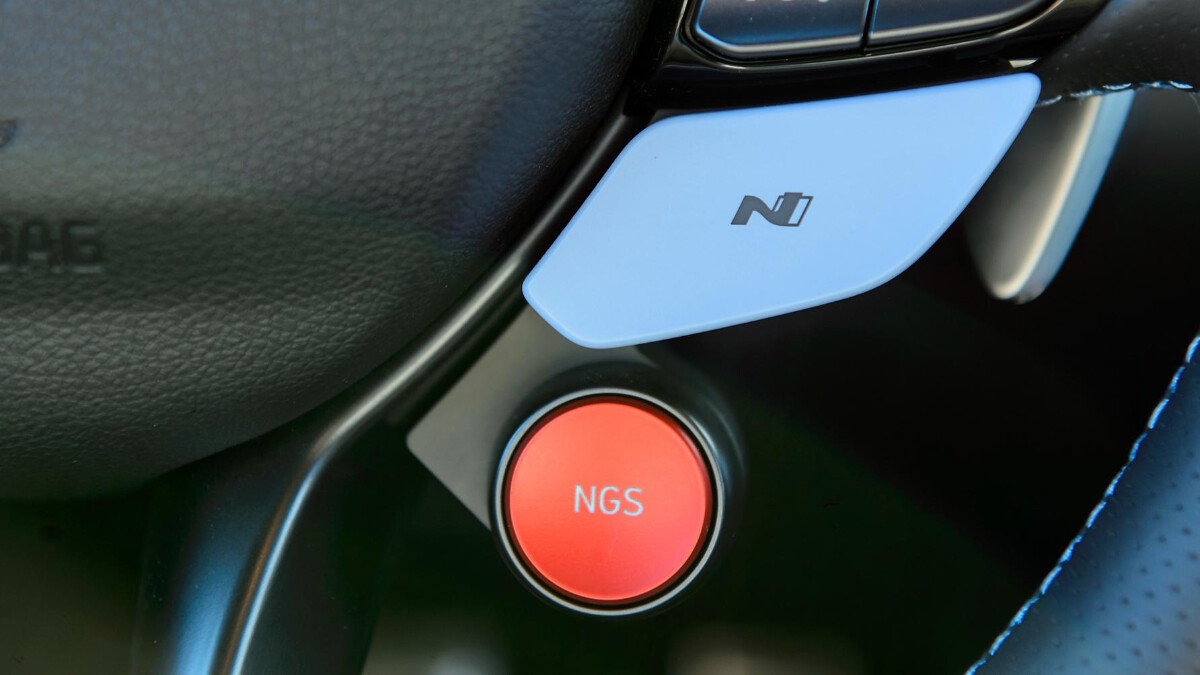 You just have to engage with—and enjoy—the silliness. The same ‘warning’ beep that signifies icy roads or low tire pressures also alerts you to S-bend signs with a suggestion of N mode if you’re mooching around with the car in something more docile. In the i20N hot hatch, that feels hooligan enough; in something with an automatic gearbox, family-friendly proportions, and hill-descent control, it’s more rambunctious still. Just go with it.

You get a pair of big hugging sports seats, and in front of them is a nicely laid out interior, offering the perfect blend of digital and physical touchpoints. So the nav, media, and drive mode screens are all swiftly navigated on the touchscreen while physical climate controls sit below, and there’s a big circular ESC off button right near the pleasingly normal gear selector and manual handbrake. Many of those three things are increasingly rare in anything performance-oriented these days, never mind a small SUV with its PE kit on. 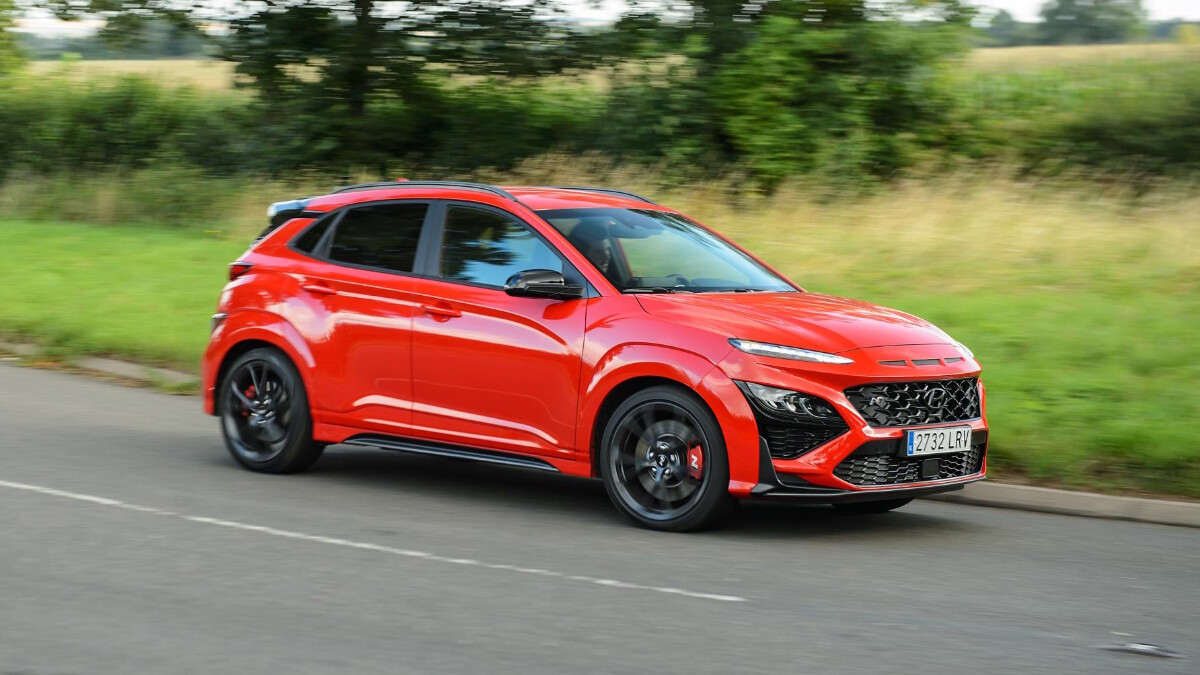 While we can expect future N Division cars to be electric- and perhaps hydrogen-powered, it’s currently providing an antidote to swelling technology by making rapscallion little cars like this—cars that draw their driver into mischief with little persuasion. Just with all of the active safety tech a family SUV needs a simple button press away.

It’s joyously silly. And if you can cope with mildly insatiable thirst and a firm ride, it ought to be more than capable of handling everyday life, too. ‘Most fun small performance crossover on sale’ may sound like faint praise, but it’s a title true of the Kona N either way. 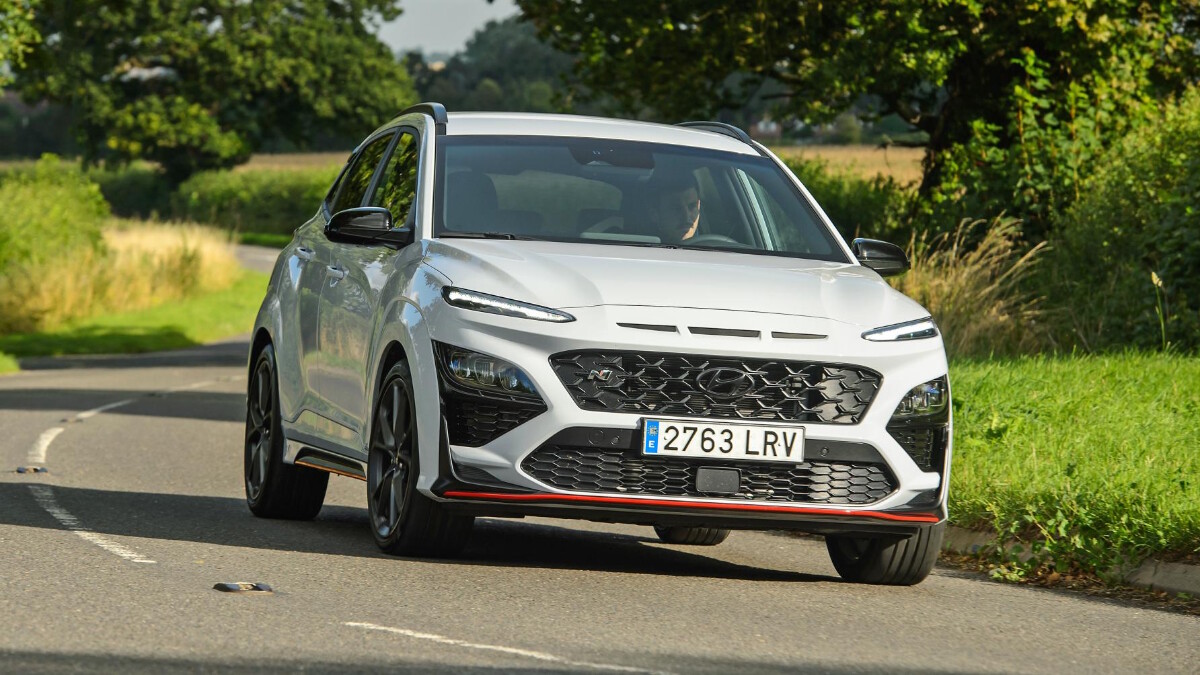 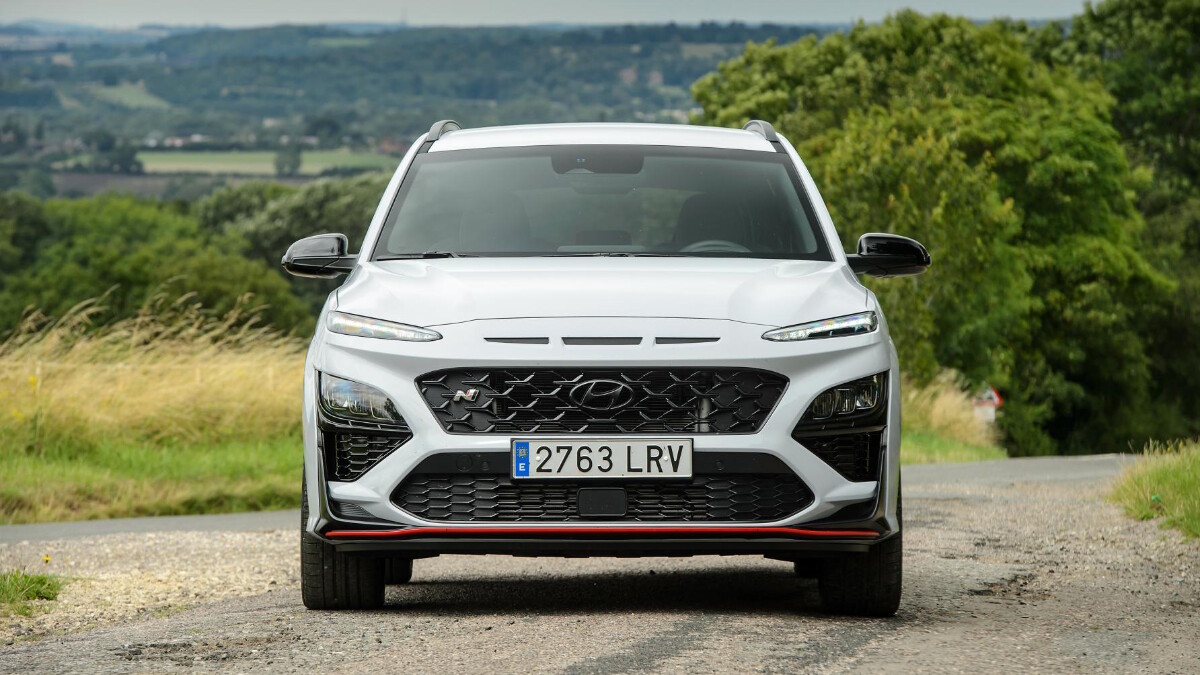 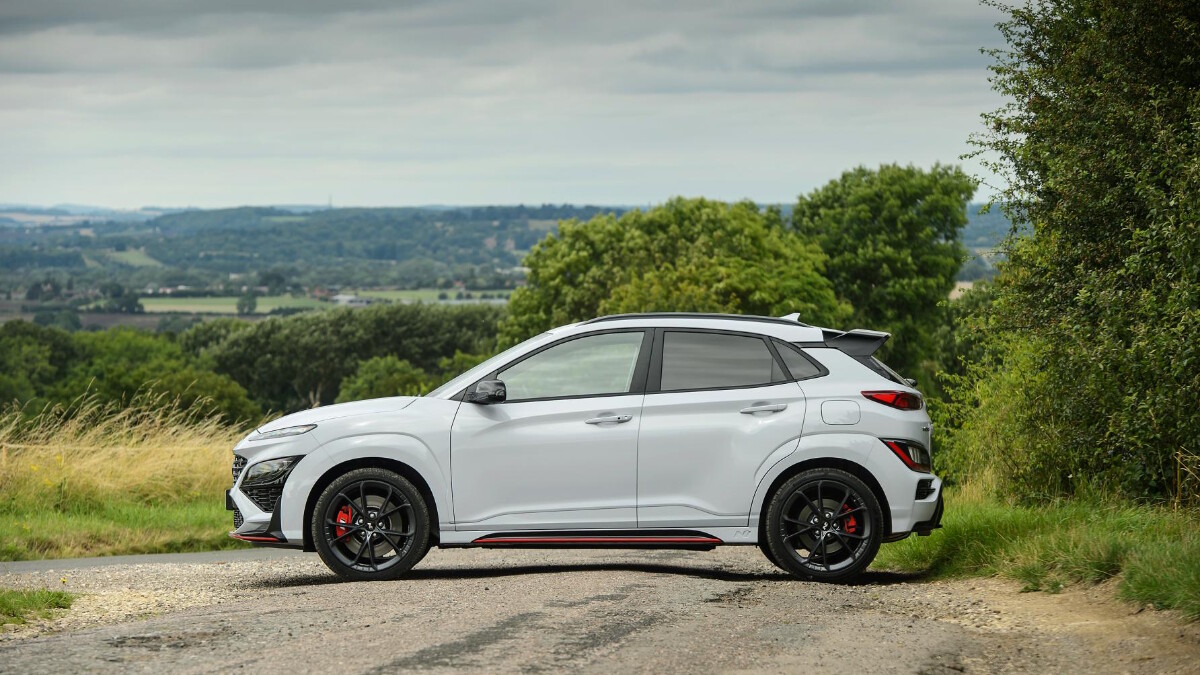 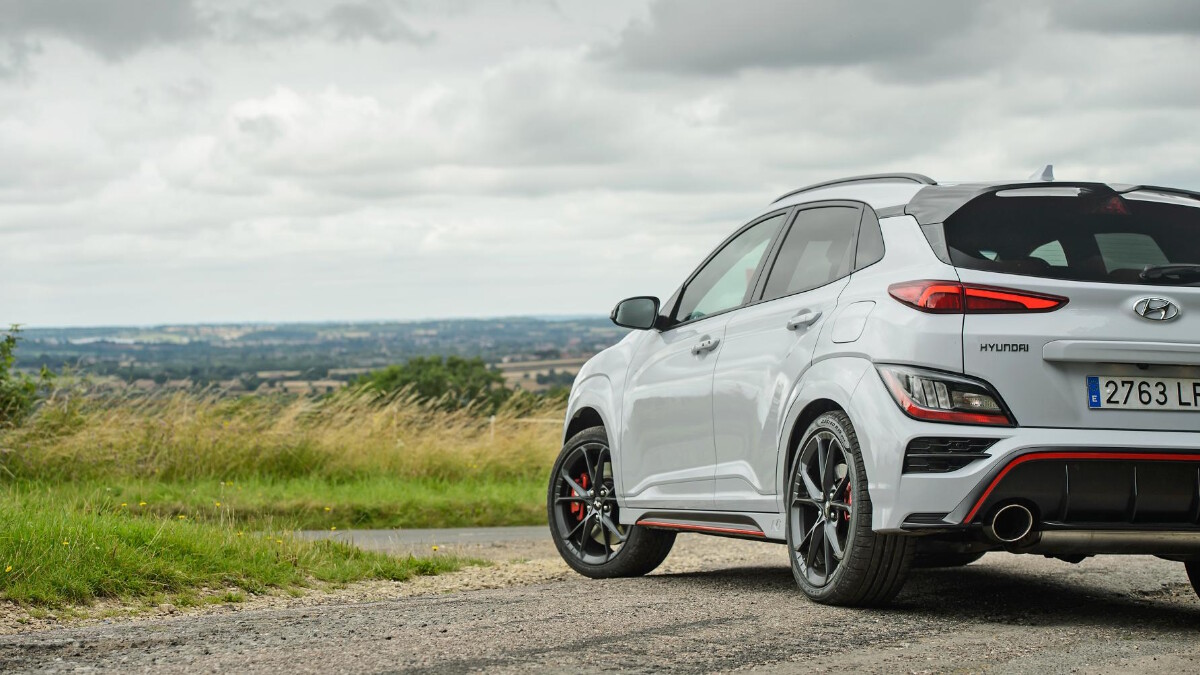 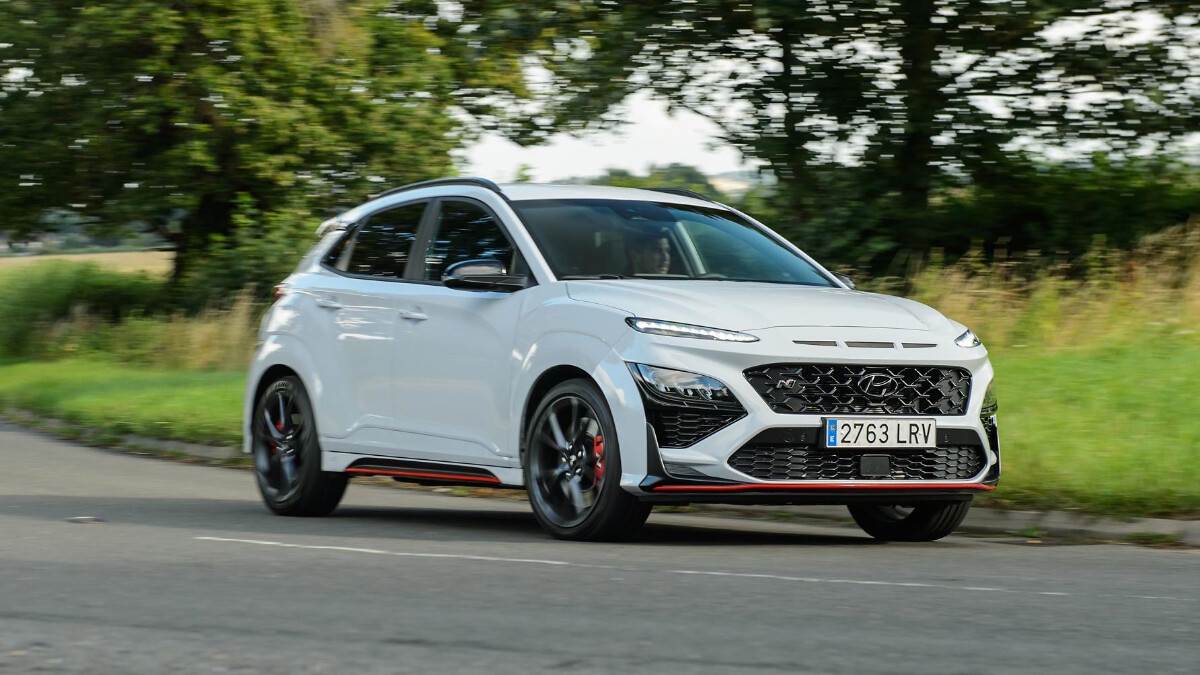 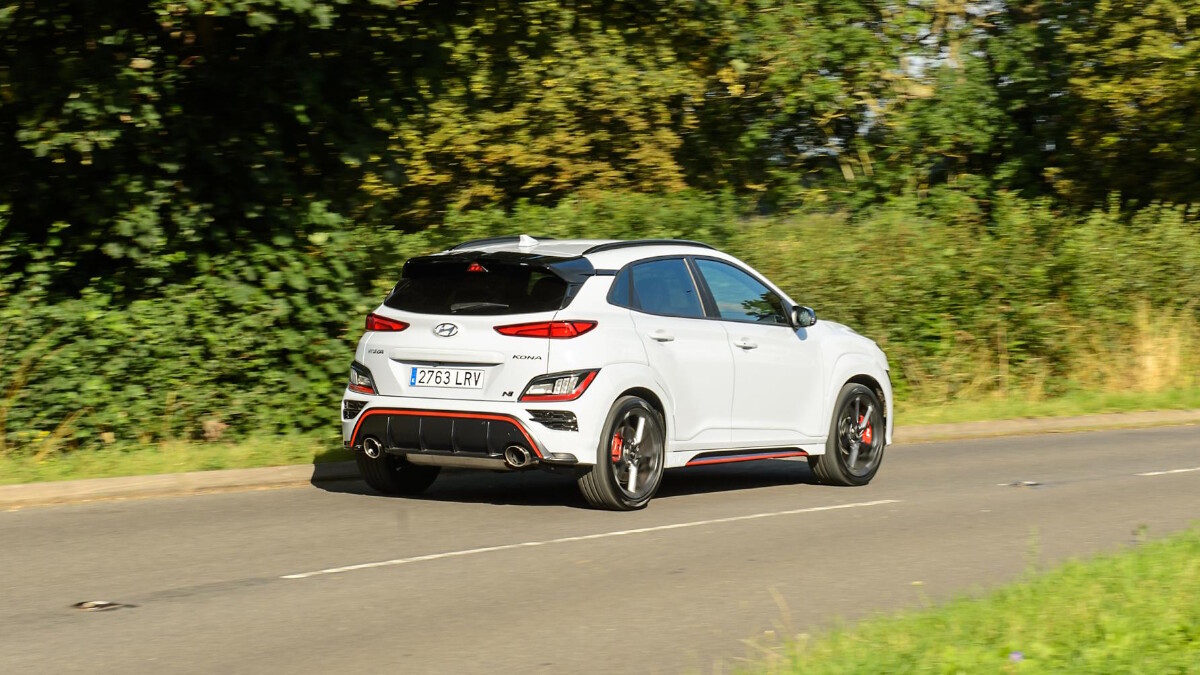 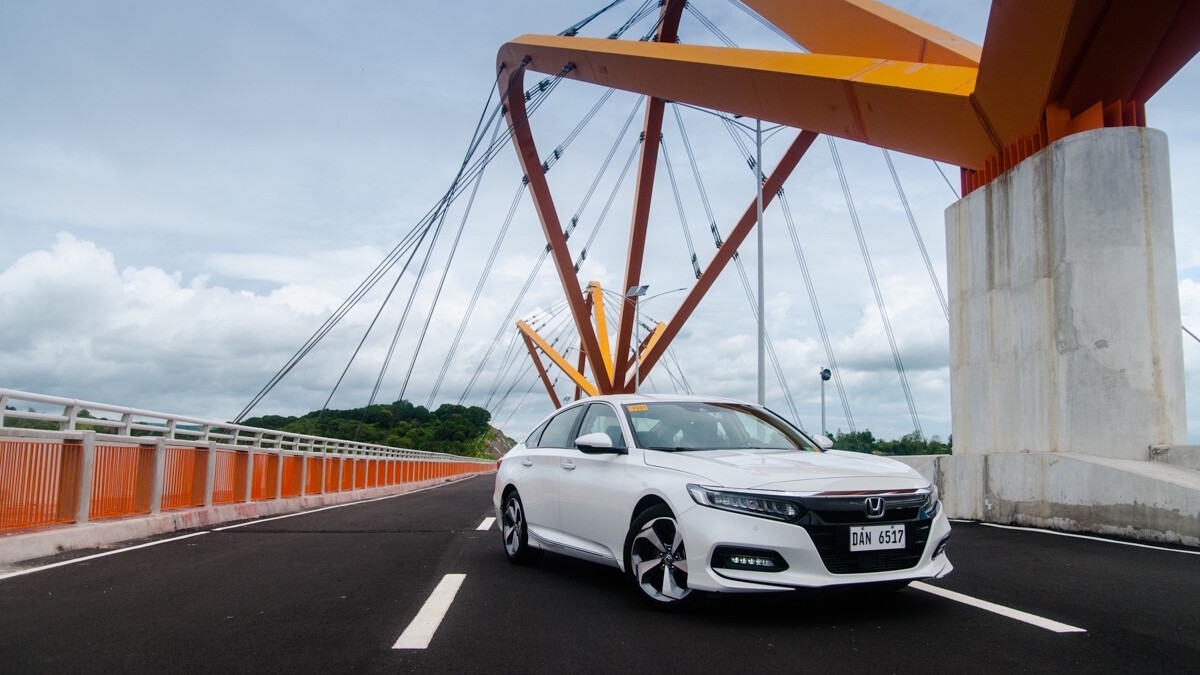 Review: 2021 Honda Accord EL Turbo
View other articles about:
Read the Story →
This article originally appeared on Topgear.com. Minor edits have been made by the TopGear.com.ph editors.
Share:
Retake this Poll
Quiz Results
Share:
Take this Quiz Again
TGP Rating:
/20