You may have heard of Ferrari’s line of ‘Icona’ cars—limited editions inspired by the Italian brand’s illustrious back catalogue. The Monza—a roofless, windowless rollerskate based on the 812 Superfast—is the first of these. Only 499 will be built, and you guessed it—they’re all sold out, at £1.4 million (P94.3 million) a pop.

The stunning bodywork is inspired by the 750 Monza and 860 Monza racing cars of the mid-’50s, referenced in the voluptuous front wing curves, those abrupt rear buttresses, and a choice of seating. 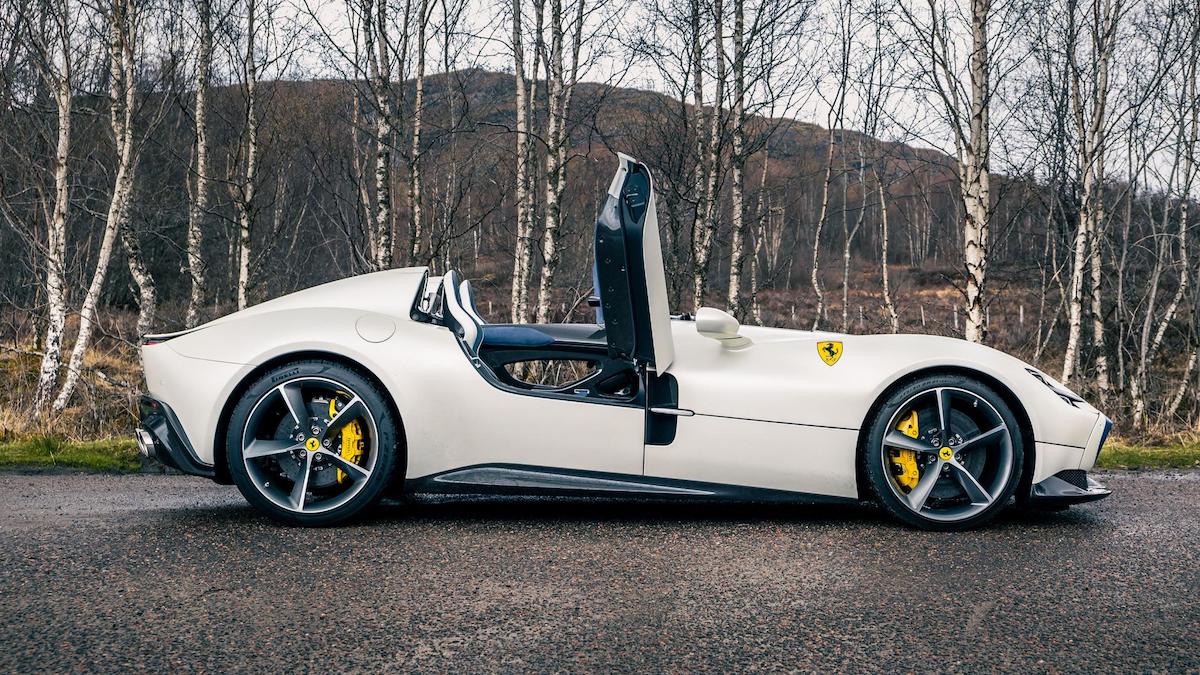 Ferrari offered a duo of Monza body styles: hedonistic single-seat SP1, or this more sociable two-seat SP2. It won’t reveal what the split between SP1 and SP2 commissions was, but word is that each Ferrari-approved buyer could only pick one. No matching pairs for your collection.

All that gorgeous coachwork is carbon fiber, and it’s all expensively bespoke. Even the LED light units—unusually a slender lightbar instead of quad round lenses at the rear—and those turbine-spoke wheels are fresh, unrecycled from other Ferraris.

Underneath, of course, the Monza’s foundations are more familiar but hardly ordinary. The front-mid-mounted 6.5-liter naturally aspirated V12 engine is lifted from Ferrari’s psychotic super-GT, the 812 Superfast. Having received a token 10hp power bump, it slots in under the new front-hinged clamshell hood, assaulting the usual seven-speed twin-clutch gearbox with a total of 799hp and 718Nm. There’s no SF90-style hybrid boost, and it’s rear-wheel drive. Gulp. 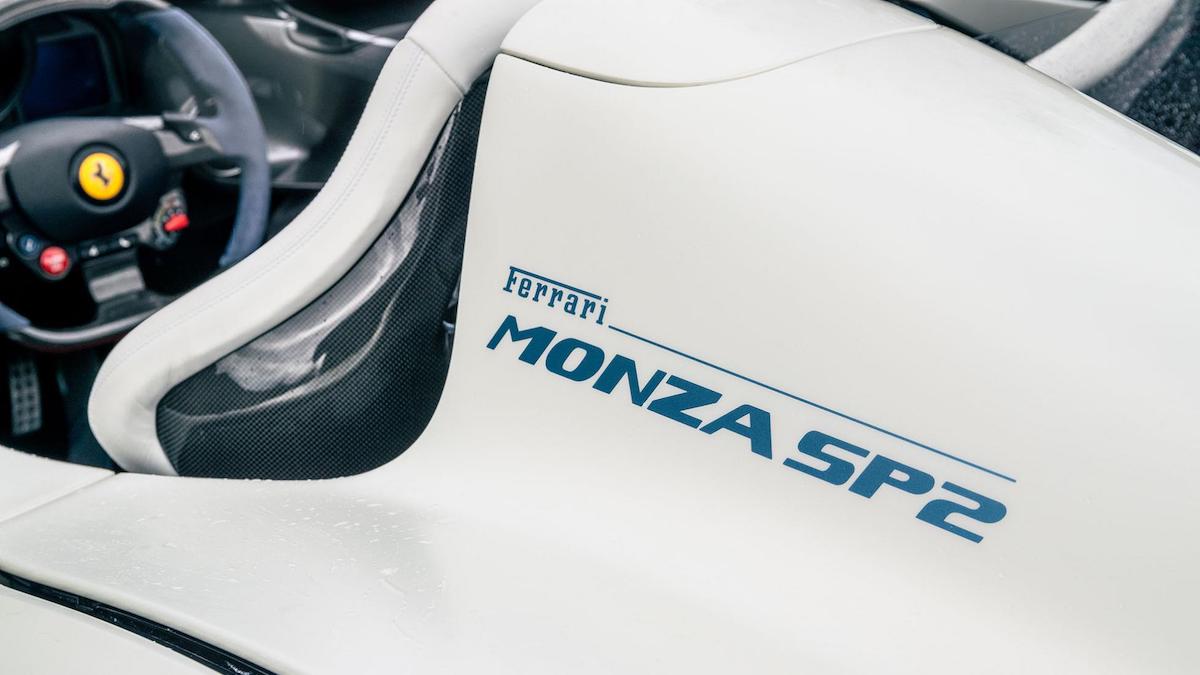 While the Monza has jettisoned anything resembling weather protection, it’s far from being a featherweight Caterham that’s had some opera lessons. The SP1 weighs in at 1,500kg dry, while this SP2 is 1,520kg. Ready to roll with fuel, fluids, and a driver strapped inside, it’ll be knocking on the door of 1.7 tons.

But you sense this is a rare thing in Ferrariland: a supercar that doesn’t sweat the numbers. Outlandish downforce claims are absent. Ferrari hasn’t bothered with a Fiorano lap time. Even the top speed is officially quoted as ‘over 186mph’ (299kph). Daring you to go and find out, they are, while seeming to hint the Monza is all about the experience, not the data. And what an experience it is. 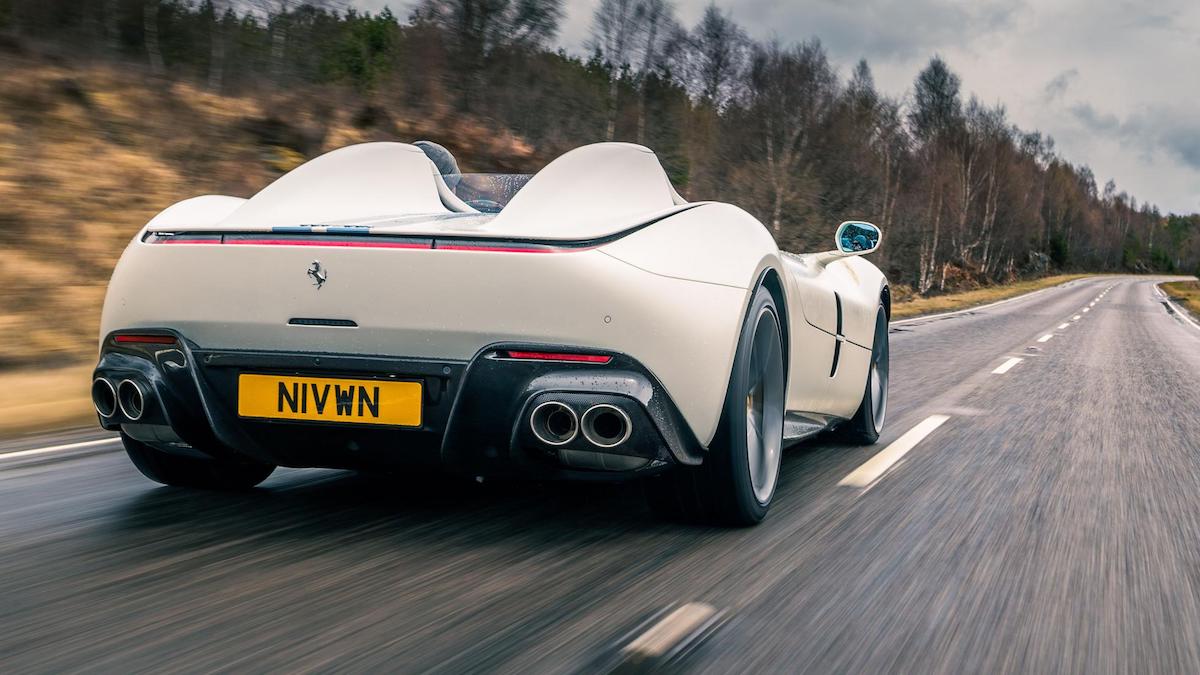 It’s also enormous, and as you reach over the door top to tug the leather release strap, dodge the uppercut from the heavily sprung, praying mantis wing that pops skyward, and straddle the huge carbon sill (here bearing the name of the gentleman who’s lent us his very own Monza in the Scottish Highlands), well, let’s just say the opening exchanges aren’t exactly short on supercar theater.

Thumb the inviting red starter button on the familiar Ferrari button-ridden steering wheel and the finest engine in production today barks into a bored, menacing idle. Pull a paddle and the gearbox selects first. So far, so Ferrari. And just like in an 812, the Monza is tricky to smoothly creep away in. 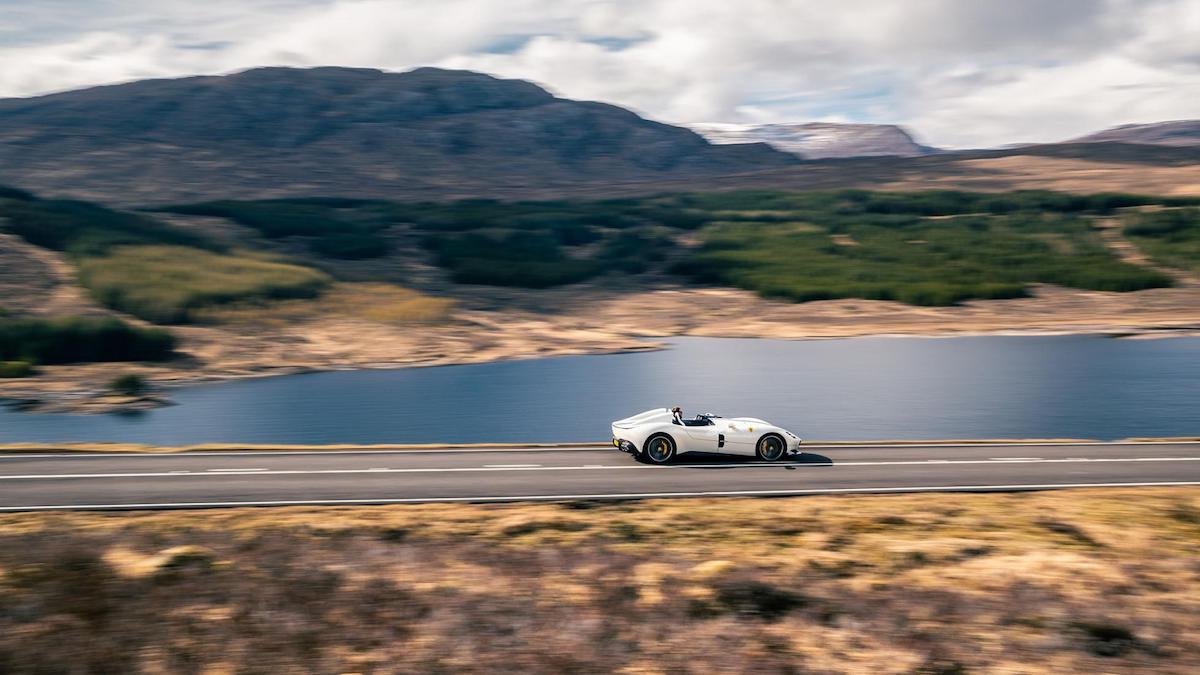 Not simply because it sounds like the London Philharmonic Orchestra being fed feet-first into a blender, but also because the throttle travel is long and the pedal needs a hefty prod pedal before the driveline hooks up and the car scoots forward, chirruping its back tires if you’re not careful. Gulp.

Once you’re underway, first impressions are worryingly...calm. The ride is sublime, and then you realize you haven’t even hit the Bump Road damper button. Prod it and the Monza relaxes into an even more comfortable, perfectly controlled lope. It rides more expensively than most German luxury sedans. The gearbox works away politely into automatic mode.

Don’t get lulled into thinking this is some sort of decapitated GT car, though. Flex your wrists and the steering darts the nose halfway across your lane. Risk taking your eyes off the road to adjust the heater vents (don’t bother—the blower is pathetic) and you’ll be slapping road studs in no time. The steering is pure 812: light, flitty, and hypersensitive. Just what you want when you’ve got 800 Italian stallions versus two rear tires and everyone in earshot is watching. And filming. Double-gulp. 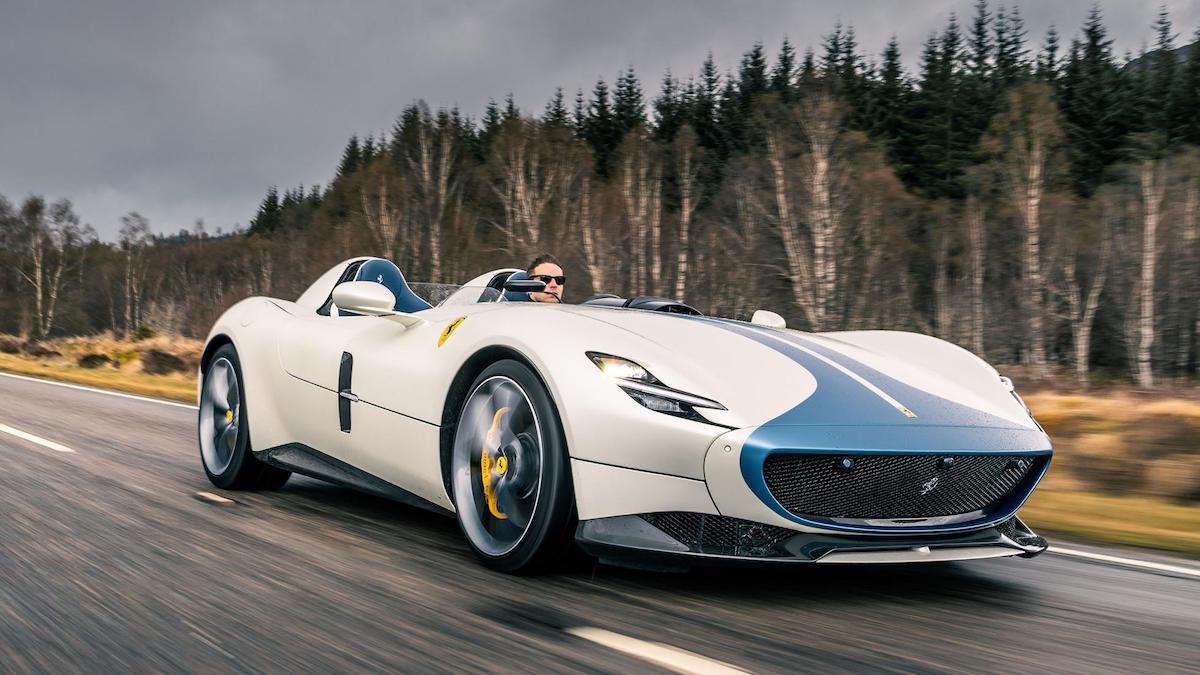 Once you’ve built up some confidence—and preferably some temperature in the road-roller Pirellis—then you’ll discover the Monza behaves like, well, a very draughty 812 Superfast. It’s barely any lighter, and the center of gravity doesn’t feel notably lower despite the roof-ectomy. How quickly you cover ground depends entirely on how much trust you’ve got in the rear axle maintaining any grasp of the road.

There’s that same constant sense that the back tires are always j-u-s-t on the verge of letting go with every squeeze of the throttle—the same sense you’re not so much driving the Monza as constantly reining it in, managing its flamboyant attempts to make you a headline item on the evening news. The gearshifts are fabulously savage going up and down the ’box, the turn-in is always electric, and when it finds traction, the acceleration is genuinely frightening. Anyone who buys one of these is already going to boast a bunker full of hypercars, so they’ll expect something visceral from their new toy. Select Race Mode, and use as much throttle as you dare. Job done.

But it’s not the ride, the traction, or the handling that’s the most surprising thing about driving a Monza. It’s the noise. You’d imagine that stripping the roof and glass off an 812 would turn it into a mobile altar for worshipping the V12. But criminally, it’s already losing the battle against the onrushing wind roar by about 65kph, and once you hit triple-digit speeds, the Monza might as well be electric. 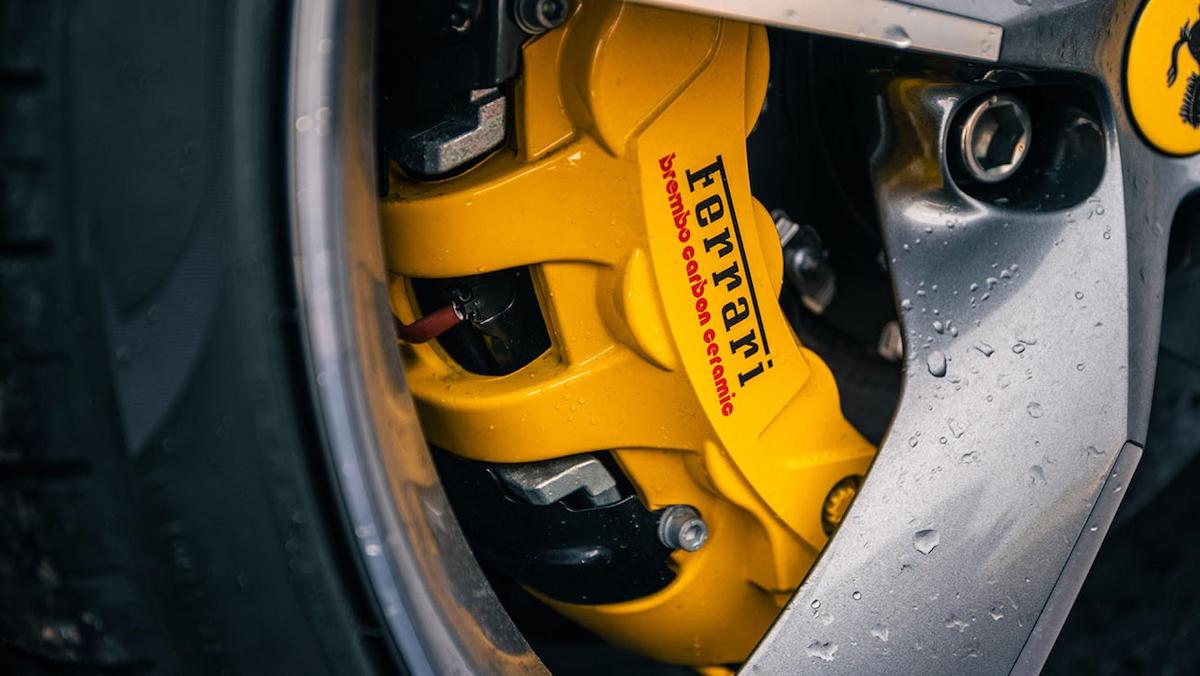 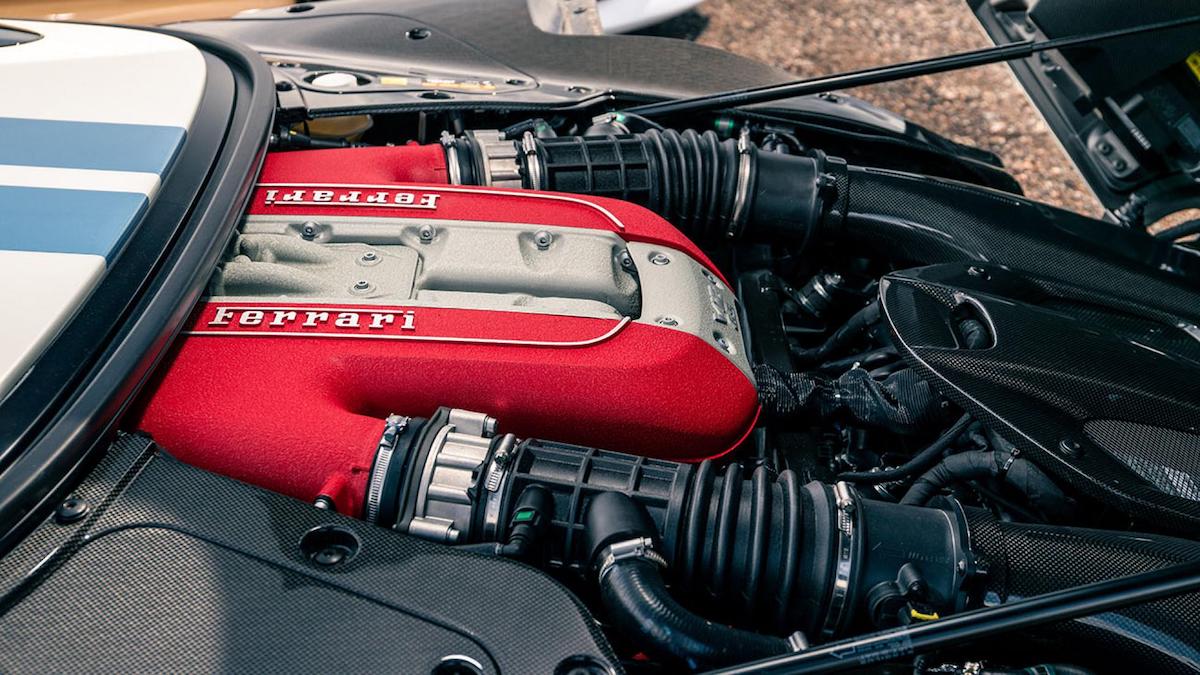 You simply can’t hear what the engine is doing. And that makes life quite lively if you suddenly spool up the rears and unstick the back end, because you’re denied that crucial aural clue of the revs spiking—and by the time you’ve checked the bagel-sized rev-counter, it’s likely to be too late.

In a tunnel, around town, or at the top of first gear, you can bathe in the operatic fury of this mind-blowing motor. But on the open road, the noise is tragically lost in your wake. Perhaps the best place to enjoy a Ferrari Monza from is following directly behind, where you can look at it, and hear it. Life’s more fun in the audience than on stage, if you catch my drift. 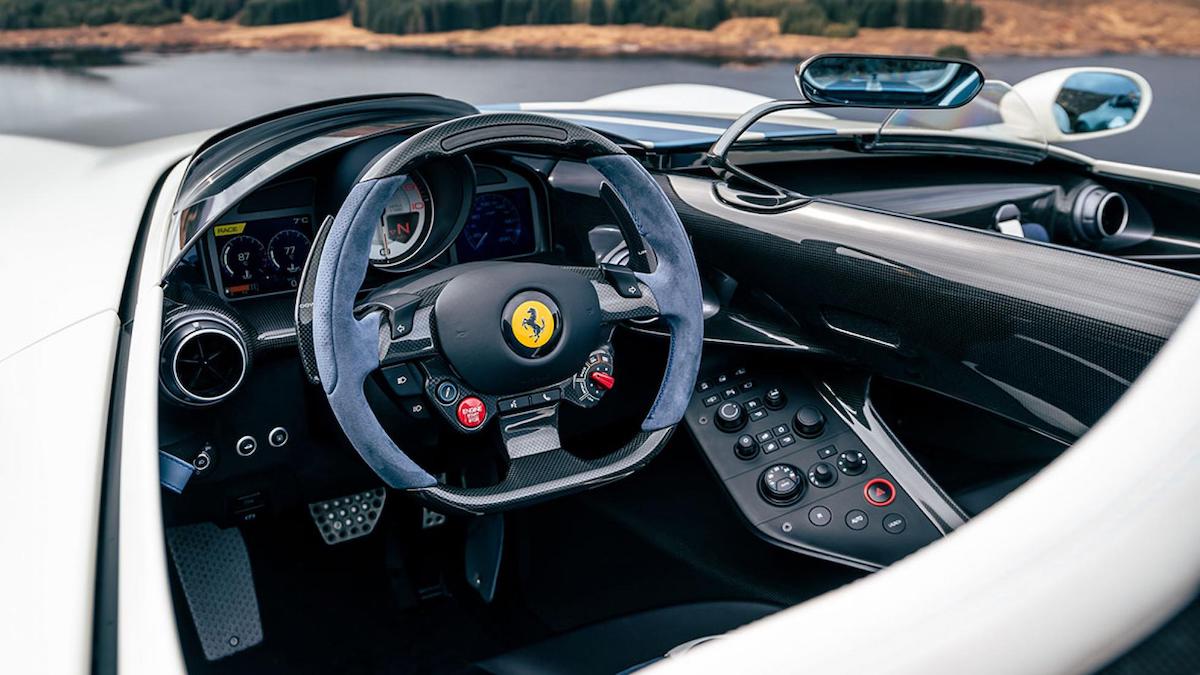 To make a semi-graceful entry, your best bet is to sit on the sill, post both feet into the depths of the footwell, then slide down into the embrace of the bucket seat. Reach up to thud the door back into position, cocooning you in a cockpit that’s all at once reassuringly familiar and bizarrely alien.

Ahead, the wheel and the dashboard are regular Ferrari fodder, but the canted panel of buttons under the thick carbon tendon looks pretty ’90s. Happily, you’ll soon discover having a simple fascia of tactile buttons to prod is welcome when attempting to tame a Monza. The nose-lift works rapidly. Pity the heater is a weakling—just like in the 812 GTS.

The panoramic view from the driver’s seat is one of the great outlooks in motoring: unencumbered by a headlining or pillars, with the hood scything into the distance and the front tires located by those helpful humps in the front wings. The front parking sensors look ugly, but they’re vital to avoid a viral parking incident. 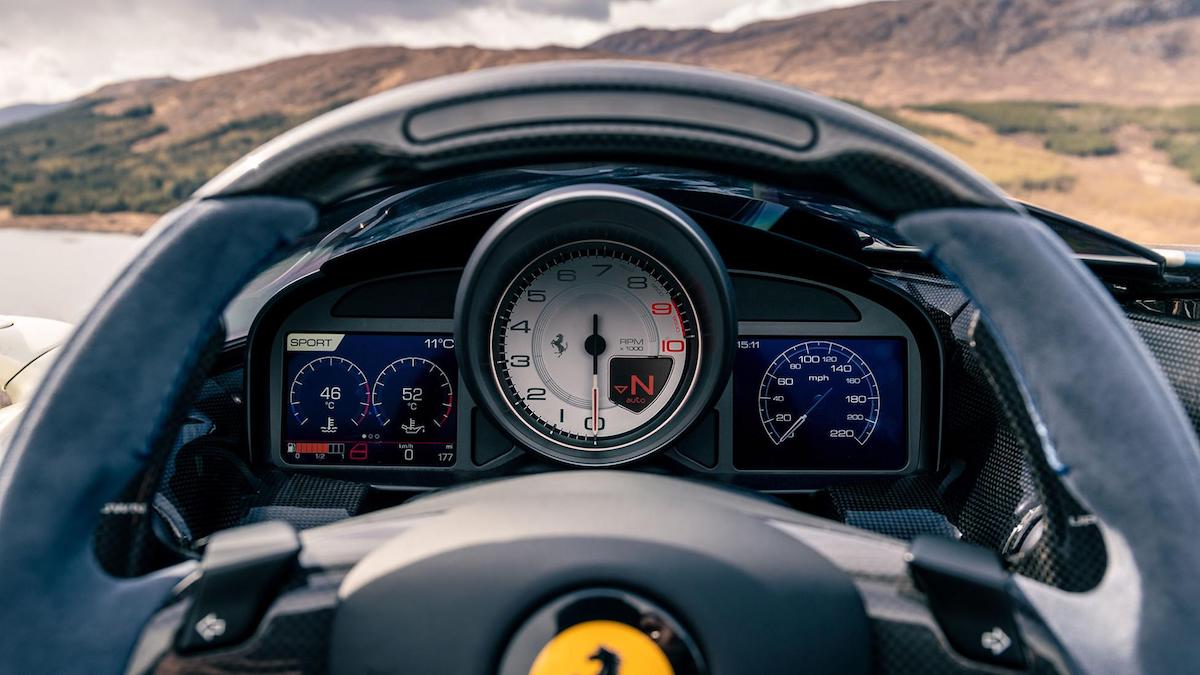 The system you’ll be most interested in is the Virtual Wind Shield, which appears to offer an elegantly simple solution to a serious problem. With no windshield, you’d expect to have your face peeled clean off by the self-generated hurricane you’re headbutting, but Ferrari reckons to have sorted it. A duct ahead of the driver purports to suck in airflow, channel it 90 degrees, and eject it vertically over the cockpit, leaving the driver undisturbed.

Now, Ferrari knows its way around a wind tunnel, so it’s a surprise to discover, as you roll past 70kph and take a walloping from the breeze, that the Virtual Wind Shield exists virtually only in the mind of the person who wrote the name down.

It’s not half as effective as the much more trick active air-management gubbins found in the McLaren Elva. You can solve this by wearing a helmet, of course, but that rather spoils the point of getting rid of the letter-box effect of a windshield in the first place. Not to mention, no one will recognize you as you wail past. 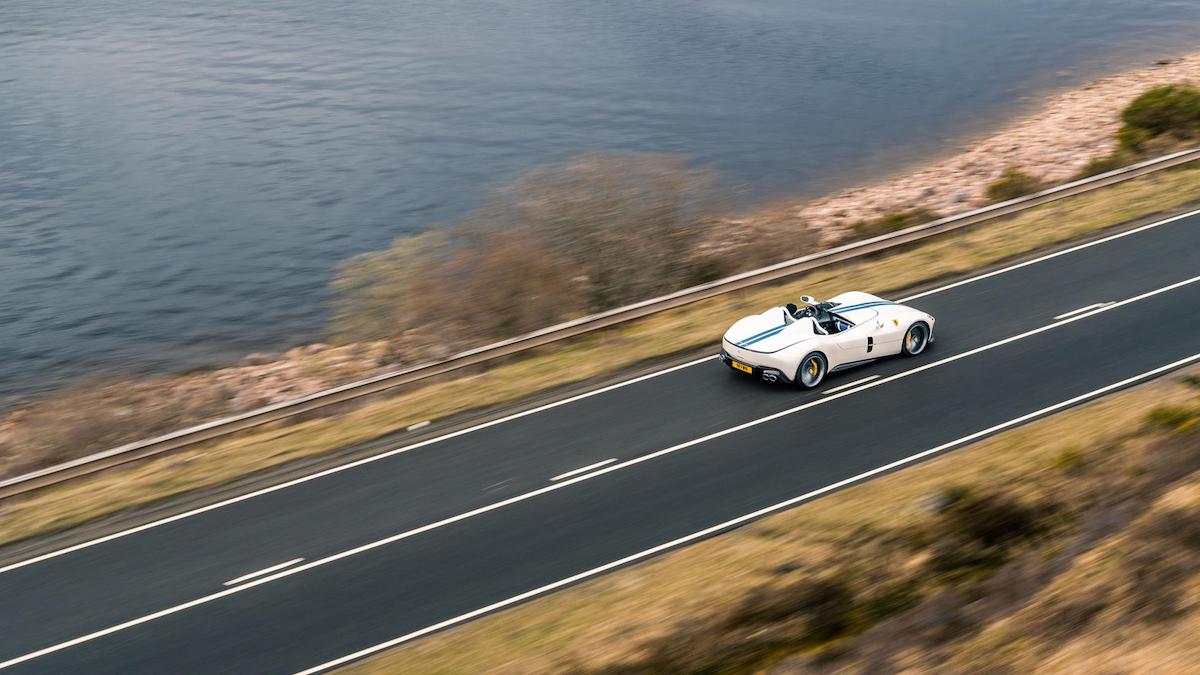 So, is the Monza the most pointless Ferrari ever? It lacks a smidge of practicality, and even on the deserted road of your fantasies, you can’t wring it out for fear of becoming a permanent fixture of the scenery you’re tearing past.

It feels like a bit of a riposte to naysayers who claim supercars are now too liveable, too easy to drive, not scary or silly enough. Here’s a Ferrari that you can only drive on sunny days, and even if you’ve got an F1 track to yourself, it’ll still spit you off into the kitty litter if you look at the throttle pedal funny.

It’s a wild, unsanitized, utterly unhinged device—one we can’t make a rational case for. Of course, the money would be better spent on an 812 GTS for enjoying the engine noise in, a 355 Spider for Sunday morning thrashes, and all the fuel and tires you need for those two toys. But that’s not how the hyper-rich think. Most of the satisfaction in owning a Monza will come from simply acquiring something only a select few hundred Ferrari aficionados were chosen for. It’s a trinket, but don’t dare disrespect it. 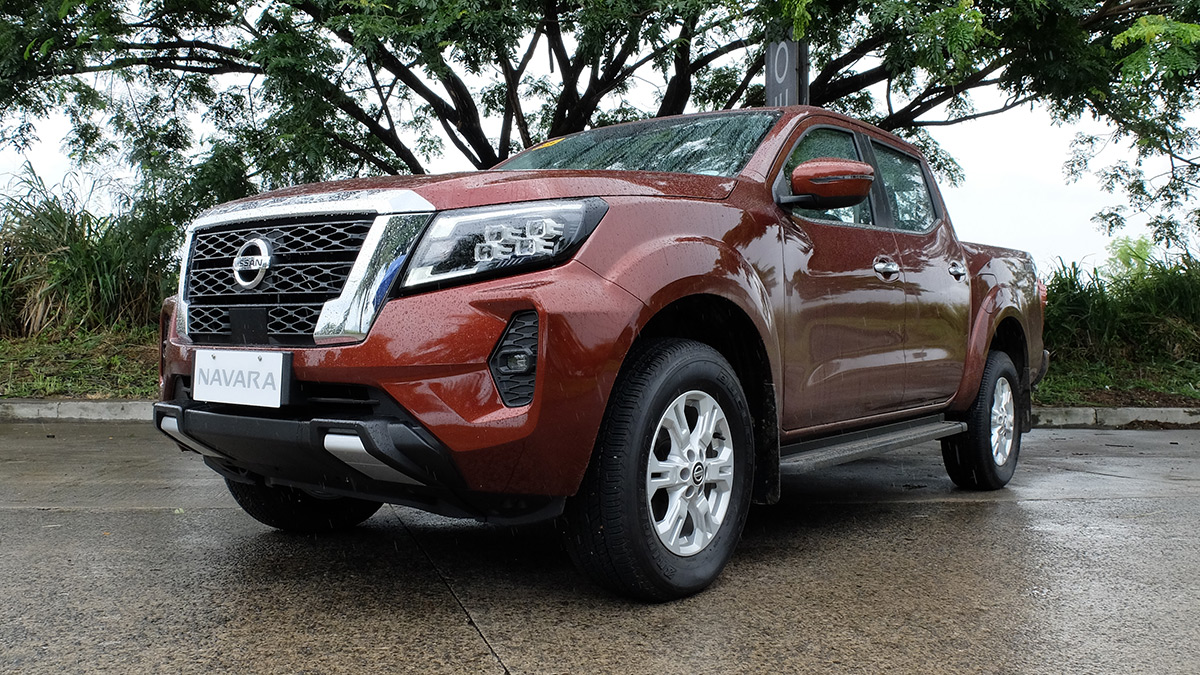 Review: Nissan Navara VE Calibre 4x2 AT
View other articles about:
Read the Story →
This article originally appeared on Topgear.com. Minor edits have been made by the TopGear.com.ph editors.
Share:
Retake this Poll
Quiz Results
Share:
Take this Quiz Again
TGP Rating:
/20