A must-see for automotive historians
by Rowan Horncastle | Dec 30, 2019
CAR BRANDS IN THIS ARTICLE

Upcycling is currently all the rage. And last year, Fiat Chrysler got in on the trend, turning an old—and huge—transmission workshop at its historic Mirafiori factory into the best retirement home ever.

It’s called the Heritage Hub, and it’s huge display of 300+ cars from the company’s 120-year back catalog. 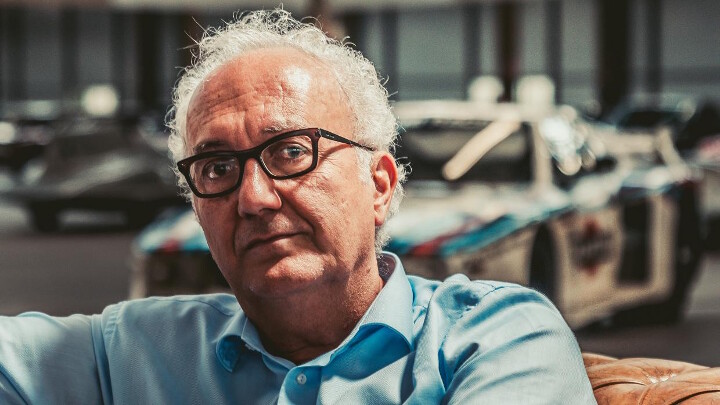 When he’s not sketching iconic silhouettes, Roberto Giolito is managing the Hub. Being the mastermind behind the Multipla and the ‘new’ Fiat 500, in the pantheon of car design, he’s one of the greats. Behind those thick-rimmed glasses and curls is one hell of a noggin. At any given moment, Giolito can burst with passion and rattle off any of the inhabitant’s histories or idiosyncrasies with encyclopedic effortlessness.

Every marque from the FCA family represented in the Hub, and the ever-growing haul is currently worth more than €60 million (around P3.4 billion)—and that’s not including the 300 other cars tucked away in storage. 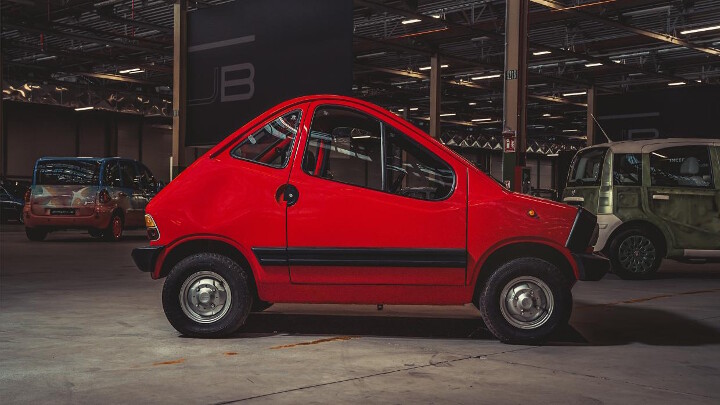 But the sheer breadth of creativity, innovation, and craziness in the room makes it more of an asylum than a museum. It’s Italy at its best. And here are Top Gear’s top picks from the breathtaking box of bonkers. 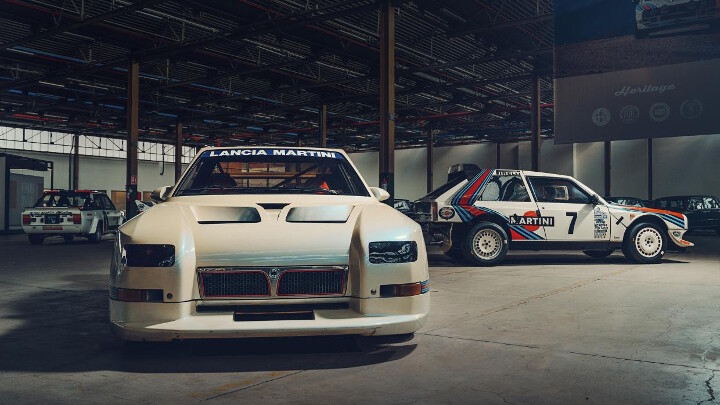 You probably recognize the rally car in the background: the rip-snorting Delta S4. But the seemingly space-age one in front? Well, that was meant to be its successor. Dubbed ECV 2, it’s one of the most complex and radical rally cars ever conceived.

Designed for the stillborn Group S class, it’s the second-generation Experimental Composite Vehicle from Lancia. Capitalizing on an abundance of Kevlar and carbon fiber (including bodywork, chassis, and even wheels), it also features a state-of-the-art and brain-meltingly complicated triple-manifold, twin-turbo ‘TriFlux’ engine. This, plus a stunted aero-friendly package, meant it had potential to be a weapon. Sadly, Group S was sent for an early bath in 1987, so it’s never turned a wheel. 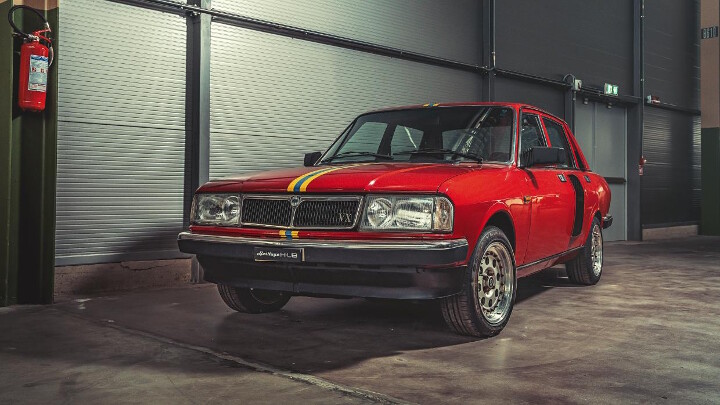 When Lancia needed to fathom a four-wheel-drive solution to compete with Audi’s rally cars, Giorgio Pianta applied some rather Italian thinking. He got a boxy family car, ripped out the rear seats, and put a supercharged 2.0-liter engine where the kids used to sit—the same engine that was still up front. Yep, what you have here is a twin-engine, twin-gearbox, four-wheel-drive nutter. And probably the ultimate Q-car. 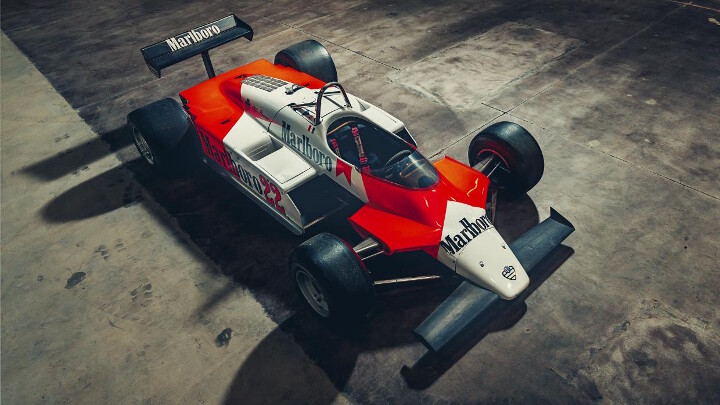 Woke young uns might not realize this, but there was a time when Alfa Romeo and Formula 1 didn’t mean a lazy paint job over a Sauber. Alfa’s main F1 success came with world titles in 1950 and 1951. But, in the mid-’80s, it also developed infamously powerful, thirsty, and unreliable turbo engines with over 800hp, before leaving the sport as a constructor in 1985. 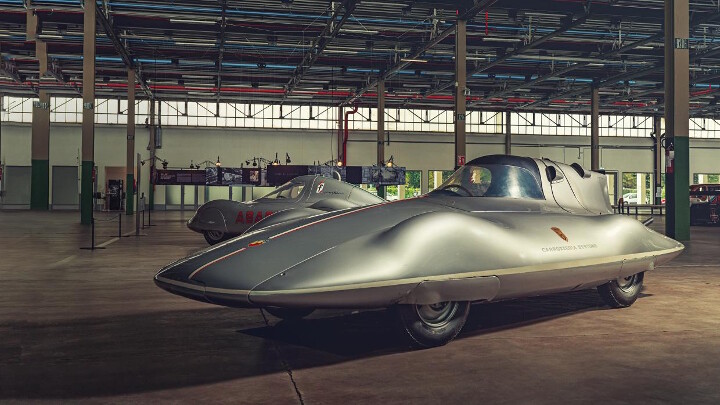 Karl Abarth liked going fast. He also liked breaking records. Over the years, he combined his two passions and made a name for himself breaking records going fast. Between 1956 and 1966, his Torino outfit set a grand total of 113 International Records and six World Records around Monza with 11 different cars. One of those being this gorgeous streamliner.

Bertone’s Franco Scaglione created the exquisite aerodynamic negligee to drape over the single-seater streamliner. It uses mechanical components from a Fiat 600, but the engine is turned up to the spec of an Abarth 750. Weighing 385kg, the combo of that titchy engine and a three-speed box was good for holding a constant top speed of over 190kph. 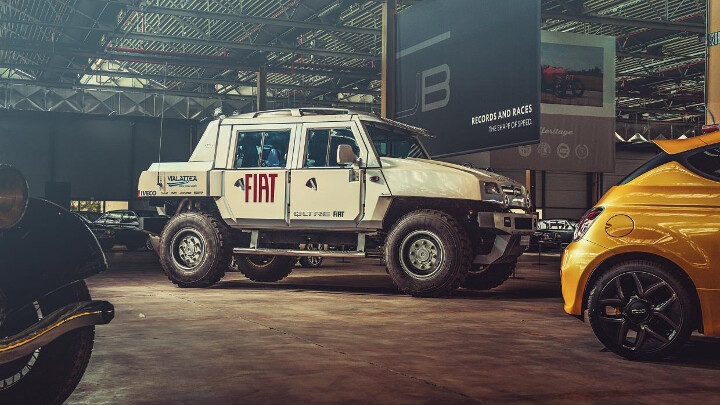 Here’s one for your inner eight-year-old: the Fiat Oltre. First shown at the 2006 Bologna motor show, it’s a big, torqued-up testosterone statement to show big isn’t necessarily beautiful. But what big is, is—er—big. And one thing the Oltre has on its side is big. Thanks to Iveco LMV underpinnings, it weighs four tons, has 20 inches of clearance, 4WD, and many diff-locks. But the engine is small—a 3.0-liter, four-cylinder diesel splurting out 456Nm of torque and 183hp. 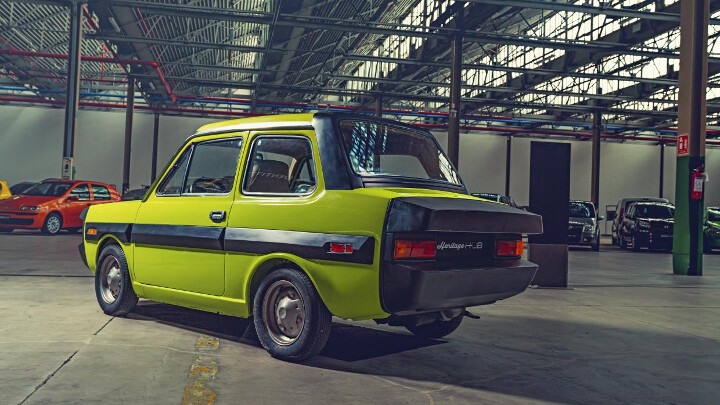 Having a strong coffee and cigarette before driving was pretty much the extent of car safety in the early ’70s. But in 1972 Fiat had a go at making cars less death-y with this, the ‘Experimental Safety Vehicle.’ It’s basically a 126 in a scrum cap. Complementing those hilarious bumpers is a soft, deformable interior, so you’re less likely to smash your face up when you understeer off a roundabout. Prego. 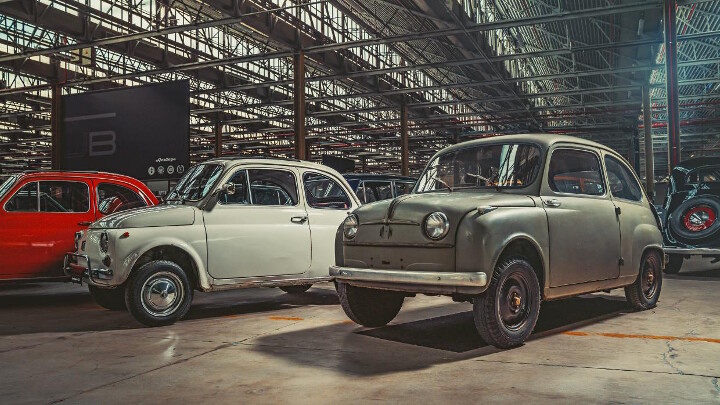 There simply wouldn’t be ‘Fiat 500 Twitter’ without this piece of history. It’s the Progetto 100, a prototype for the Fiat 600, the car that led to the mighty Fiat 500. Like the Citroen 2CV, the brief was simple: carry four adults and luggage at a cruising speed of 85kph. All in a car weighing no more than 450kg. That it looks amazing is just a bonus. Just five prototypes were built; it’s one of Roberto’s favorites in the collection. 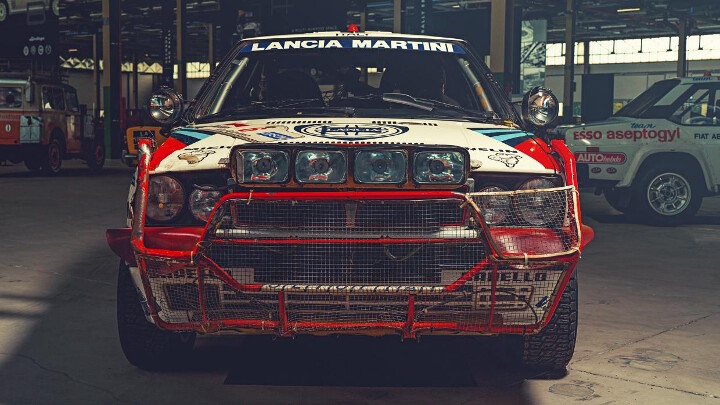 In its day, the Lancia Delta vanquished the opposition, winning the World Rally Championship a record six times in a row between 1987 and 1992. But you don’t see many Integrales wearing orthodontic headgear like this. It’s the car Miki Biasion and Tiziano Siviero won the 1988 Safari Rally in. Not without incident, though. Want to know where those dents on the bull bar came from? Let’s just say zebras aren’t as squishy as they seem. 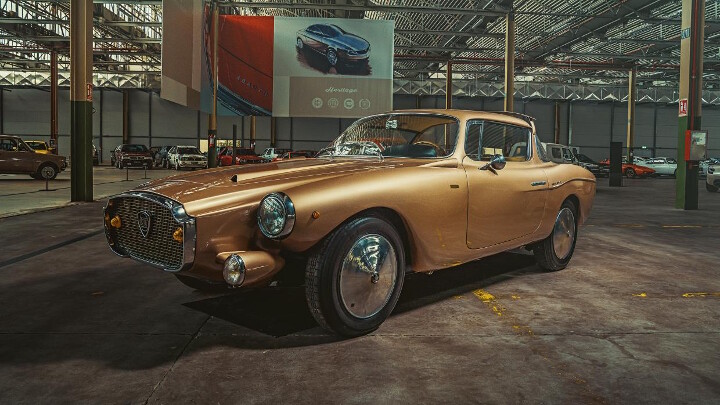 This isn’t the lovechild of Wacky Races and Big Mouth Billy Bass. It’s an ambitious one-off by the man behind the king-size Coca-Cola bottle design, Raymond Loewy. Pioneering innovative design cues, it was an aero masterpiece in its time. Check out the two outrigger fog lights detached from the body to allow for better brake cooling. Or the aileron above the rear windshield. Or enclosed chrome wheels. The list goes on... 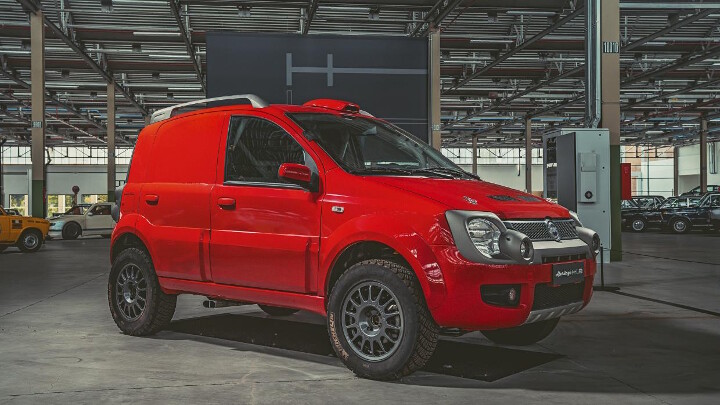 The ‘PanDakar’ proves that not all Rally Raid machinery needs to be big sand-pounding brutes. They can also be small, sand-pounding brutes, too. Built in 2007 to take on the 2007 Dakar—one of the most grueling endurance races on earth—Fiat stripped out two Pandas and hardened them up. Unfortunately, neither of them finished. 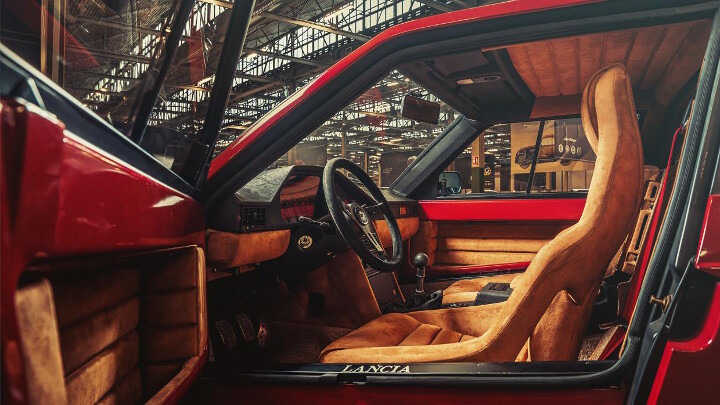 Look at that suede! You wouldn’t want to rub your bogies in that, would you? It’s the wonderfully ’80s cabin skin attached to the ultimate homologation special, the Turinese beast—S4 Stradale. Developed by Abarth and Lancia, it was a sensation: Powered by Eng. Lombardi’s 1.8-liter four-cylinder that was both supercharged and turbocharged, it was a formidable fighter in racing trim, putting out no less than 500hp. 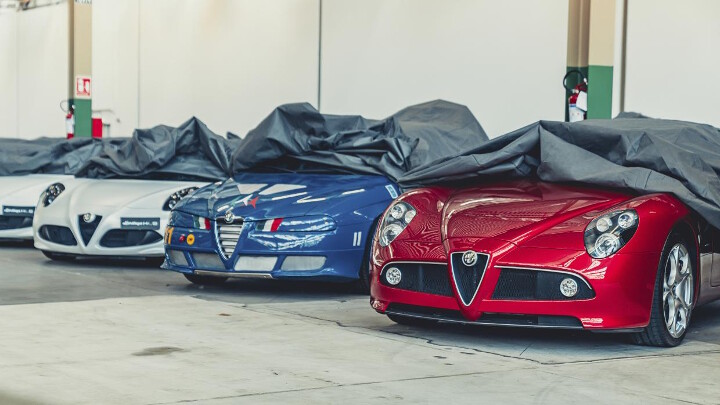 Here’s one to show your grandkids: proof that once upon a time, Alfa made cars that weren’t just SUVs. Pretty ones at that. 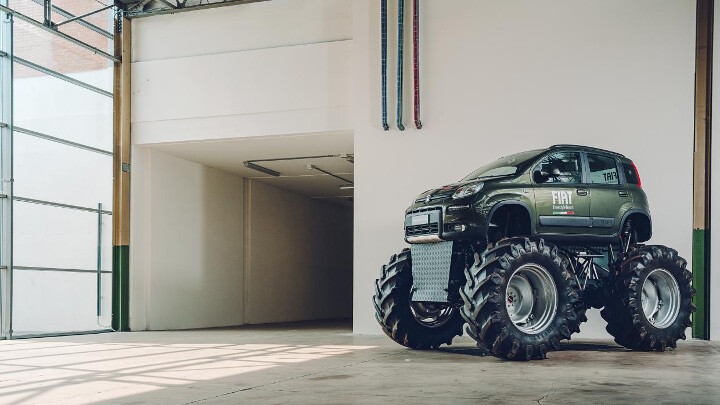 Built to advertise the fact that you can buy Fiat’s runabout in off-road flavor, this was a one-off creation that we once got to drive before retiring to the museum. The top half seems familiar enough: a whole Panda 4x4 body with a functioning interior. The only visible change on the inside is the extra-long gearstick poking out from a leathery nest.

But all of this sits upon an adopted base. The springs you see under the green arches are actually pseudo-suspension. The cab is solid-mounted, on poles the size of table legs, onto the mechanicals of a late-’80s Jeep CJ with a 4.2-liter straight-six petrol engine. The tires come from a New Holland tractor: each stands 1.5 meters tall and weighs 200kg. 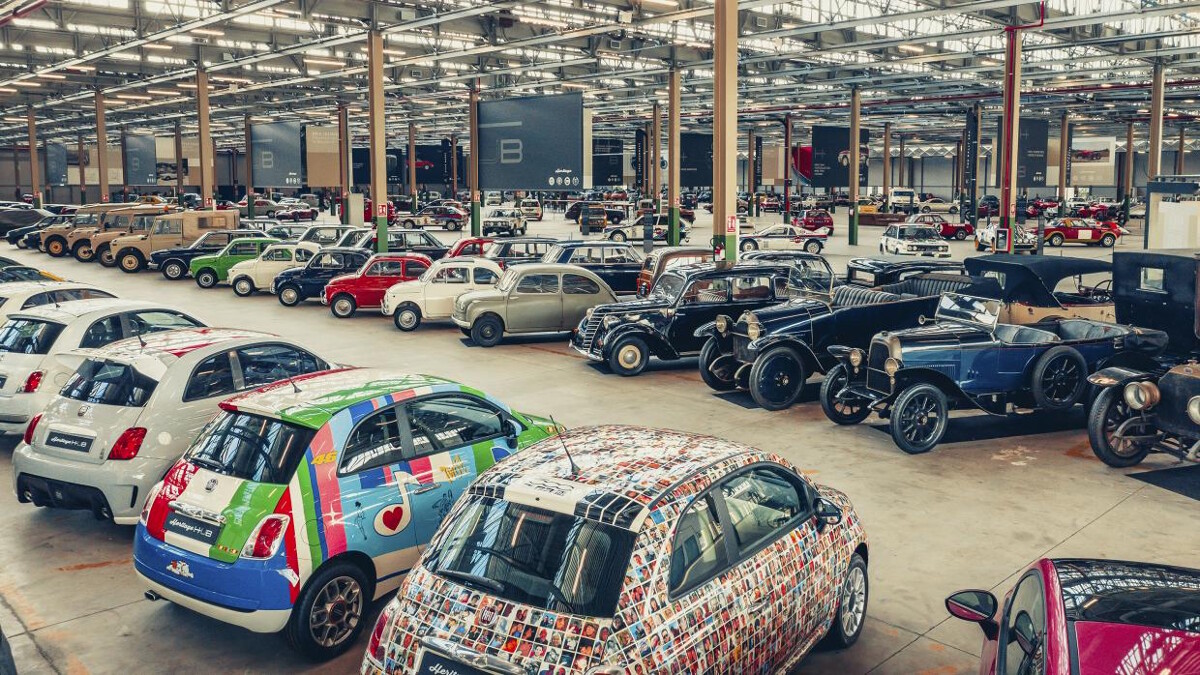 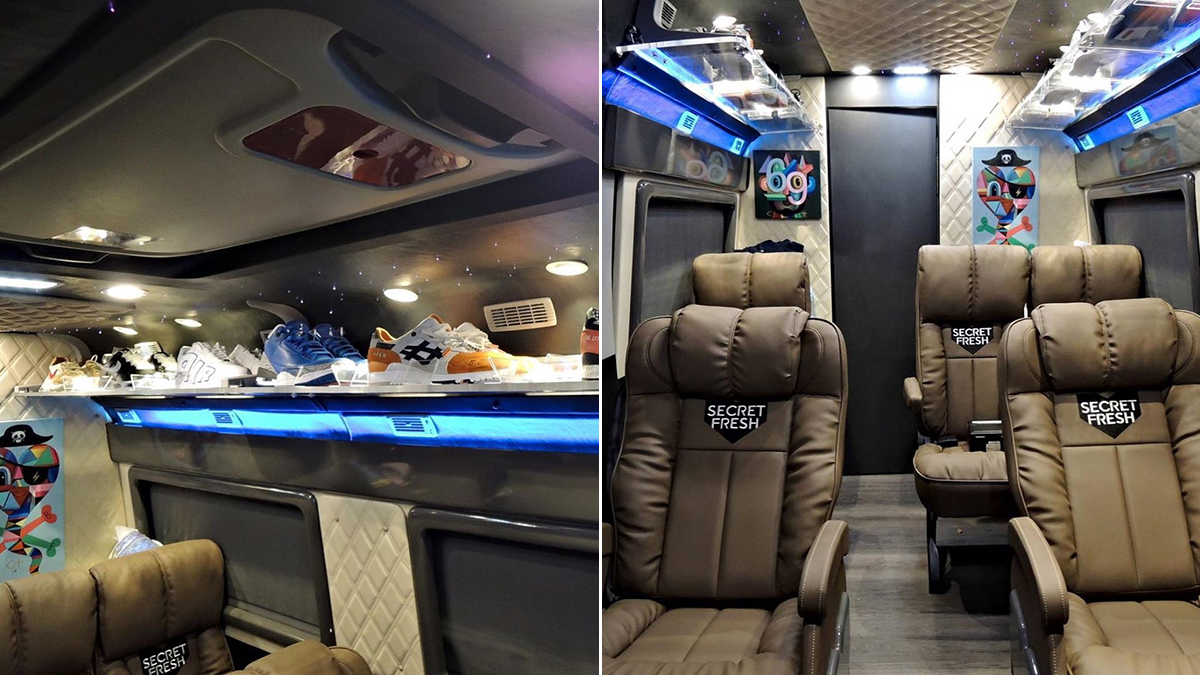 This customized Hyundai H350 is a sneakerhead’s dream van
View other articles about:
Read the Story →
This article originally appeared on Topgear.com. Minor edits have been made by the TopGear.com.ph editors.
Share:
Retake this Poll
Quiz Results
Share:
Take this Quiz Again
TGP Rating:
/20