Curious how far Ferrari has taken its hybrid technology?
by Ollie Marriage | Jun 28, 2020

Right now, I should be telling you what the Ferrari SF90 is like to drive. I can’t wait to find out where Ferrari has taken hybrid technology in the six years since the LaFerrari. Three electric motors rather than one, 25km electric range, a combined 986hp, the Italian carmaker’s fastest, most powerful road car ever.

However, travel restrictions across Europe mean I haven’t been able to get to Maranello to drive it yet. But having spent a good proportion of an evening on a conference call to the engineers and designers, I do now know quite a lot about it... 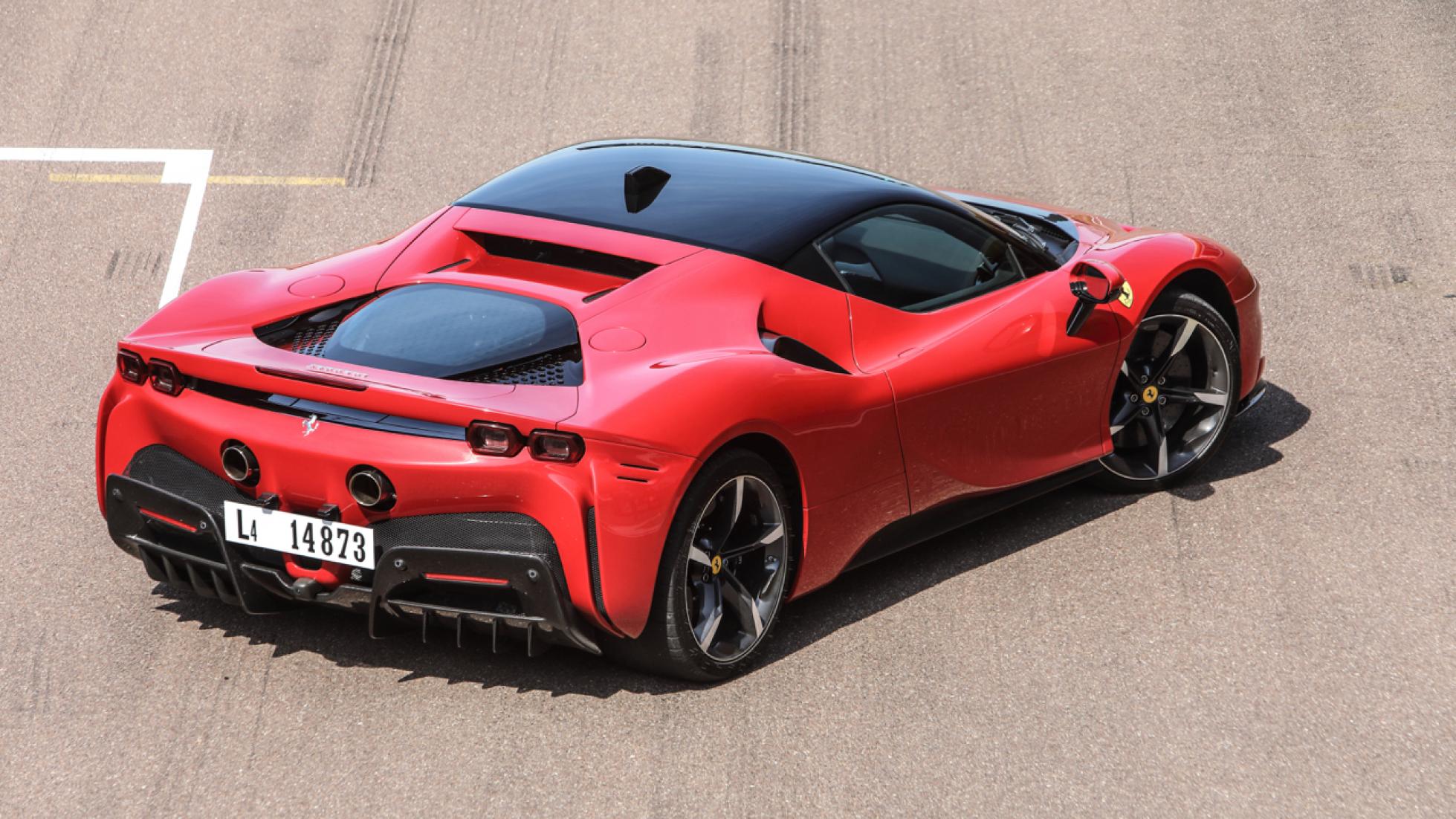 But is that what this is? I’d argue that what we have here is a new kind of crossover, a car that bridges the supercar/hypercar divide. Technically, it’s moved the game on from the LaFerrari—it’s more powerful and advanced, but crucially, it’s a full production car and not a limited-edition model. Ferrari claims ‘only’ 90% will be sold to existing customers, so you don’t have to have bought a Portofino and a GTC4Lusso just to get your name on the list. 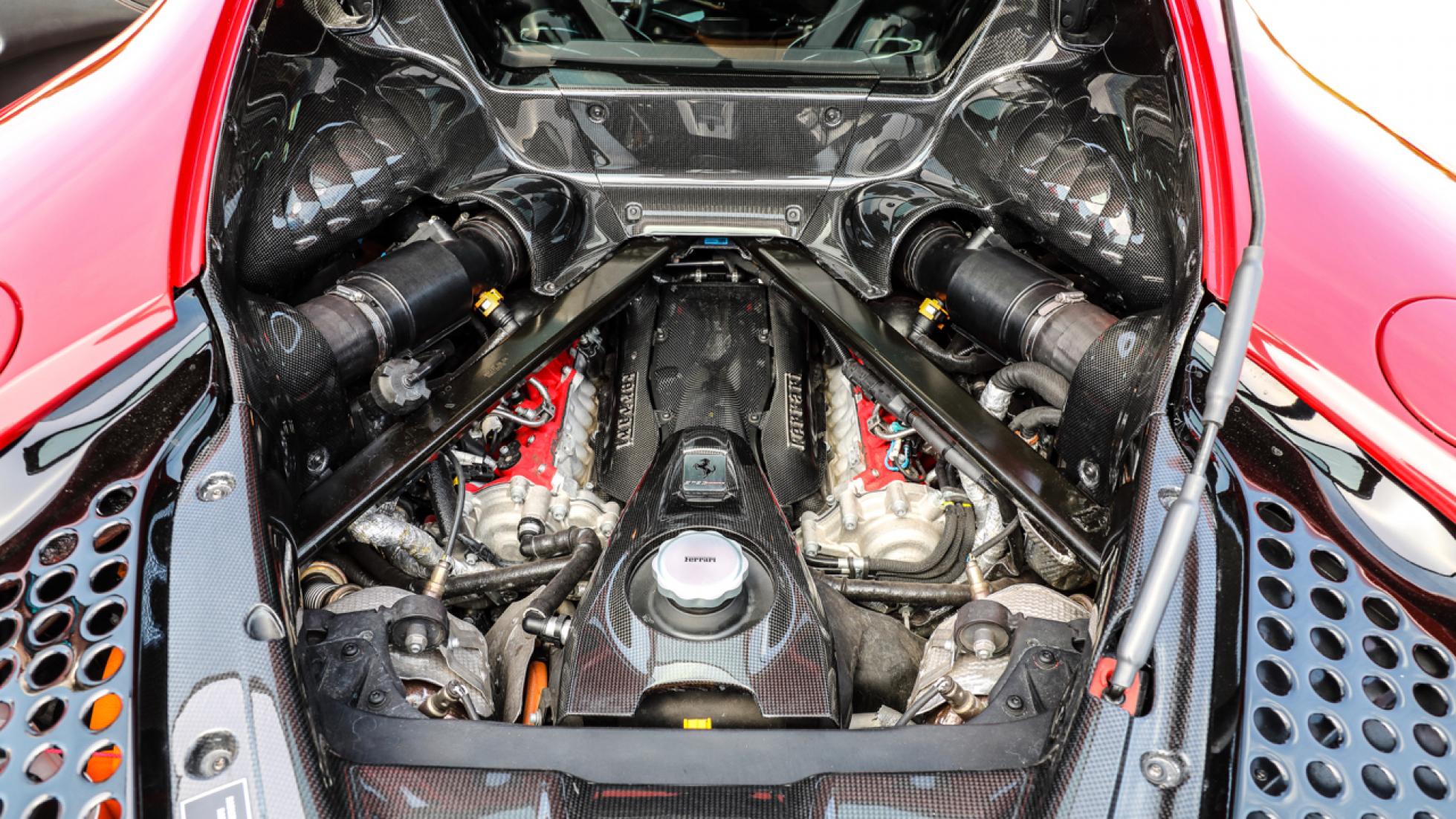 Early criticism was leveled at the SF90 because the aluminum chassis and the twin-turbo V8 mimic the F8 Tributo’s. In reality, very little is shared. Take the engine: It uses the same basic block, but pretty much everything—turbos, inlet and exhaust manifolds, the entire radically different cylinder head, crankshaft, pistons—is new. It’s direct-injection. That’s a first for a Ferrari V8. It’s wider bore. It’s 25kg lighter than the F8 engine, and mounted 50mm lower in the chassis, dropping the center of gravity by 15mm. The exhaust is made from Inconel, like in a Formula 1 car.

Alone it develops 769hp and 799Nm. The F8 motor is already the world’s most responsive turbo engine. Imagine what this is going to be like. Ferrari did admit the lessons it has learned on this development will be used elsewhere in the future. 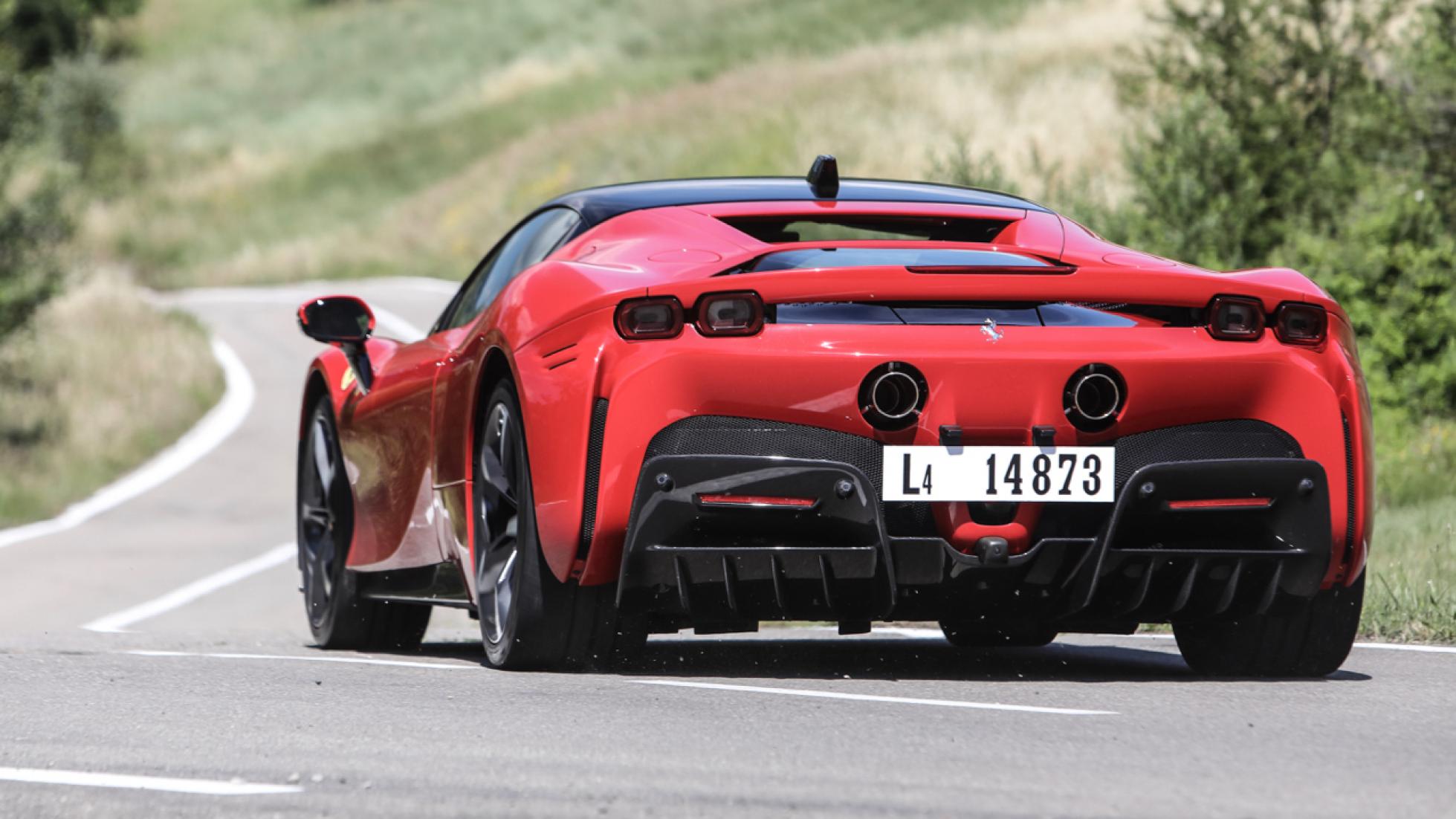 The claims are 100kph in 2.5sec and 200kph in 6.7sec. The latter figure is 1.5sec ahead of the F8 Tributo, and in the same league as the Koenigsegg One:1 and the McLaren Senna. The top speed is a less remarkable 341kph. As Bugatti proved with the Veyron, 1,000hp can take you higher, but one of the things about the SF90 is that over 210kph, the electric motors that drive the front wheels can spin no faster and are switched off. From that point on, you have to make do with 780hp. Oh, and it’s a second faster around Fiorano than the LaFerrari. 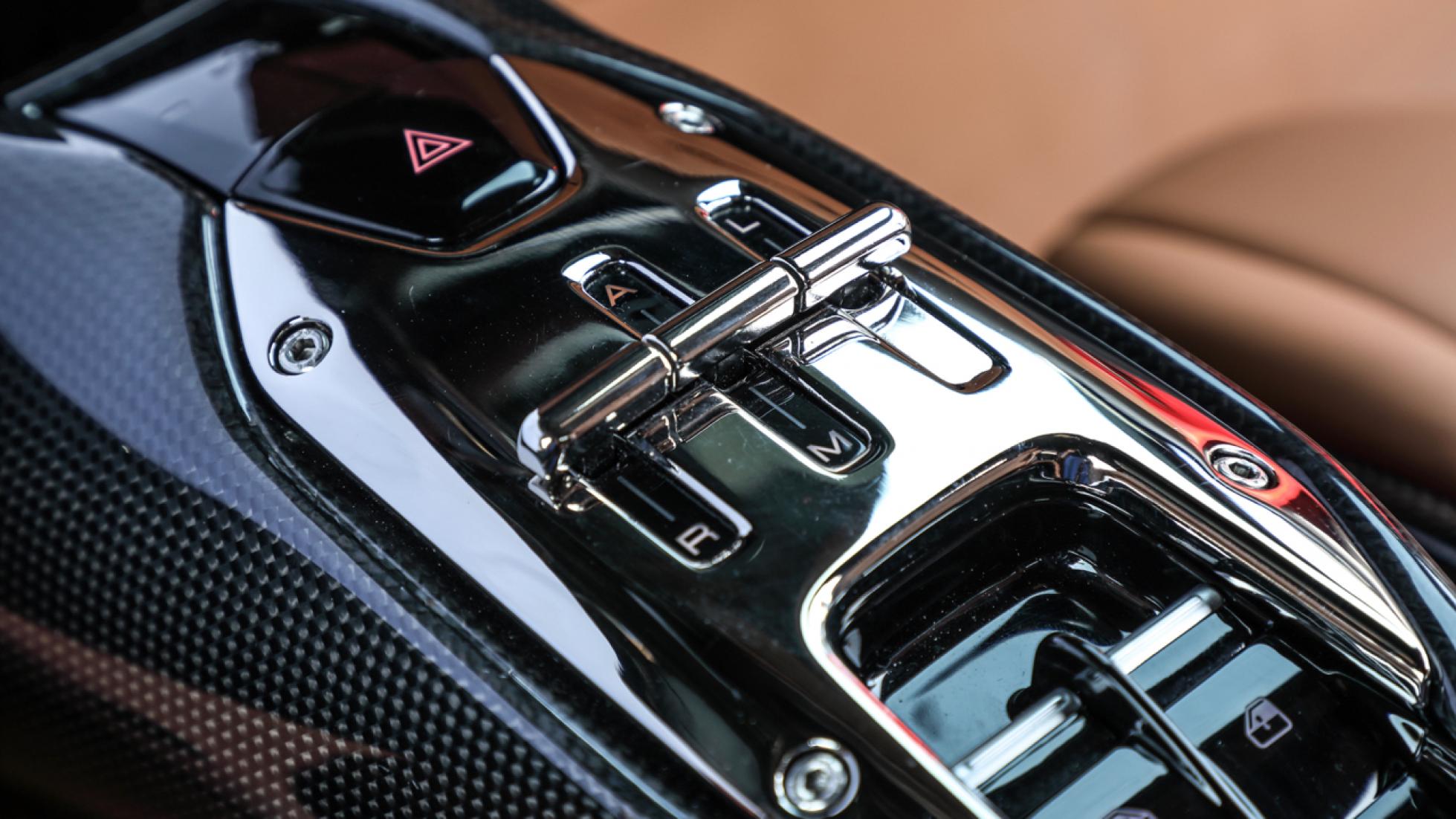 Not in the conventional sense, at least. The gearbox is an eight-speed twin-clutch that sits behind the engine. It’s 10kg lighter than the seven-speed transmission in the F8, and sits 15mm lower. One of the ways to bring down weight was to remove the components that manage reverse gear. That task is now handled by the twin electric motors on the front wheels. And don’t worry if you’ve drained the electric on your last lap and don’t think you’ll be able to reverse into your pit garage—in such circumstances, the V8 fires up to send power to the battery and on from there to the motors. 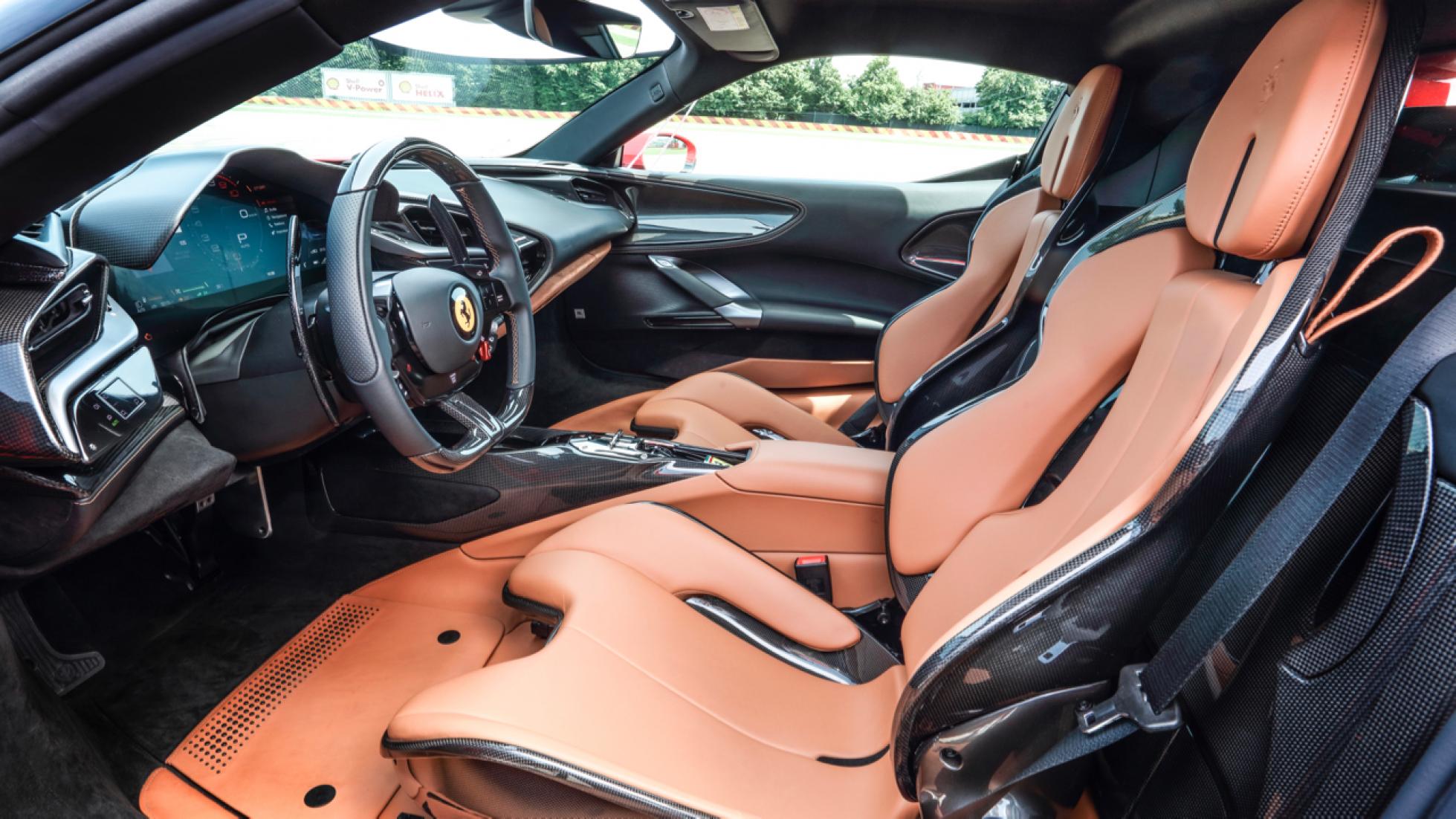 The best way to get the electric motors’ regen braking and the regular caliper braking to talk to each other and feel natural, says Ferrari, is to remove the physical connection between the two and let the algorithms have at it.

The same philosophy also dictated a switch to pure electric power-steering (a first for a mid-engined Ferrari), and the management of the 4WD system. The key, says Stefano Varisco, the head of vehicle dynamics, is that “you don’t feel the complexity.”

6) It’s not made from carbon fiber. 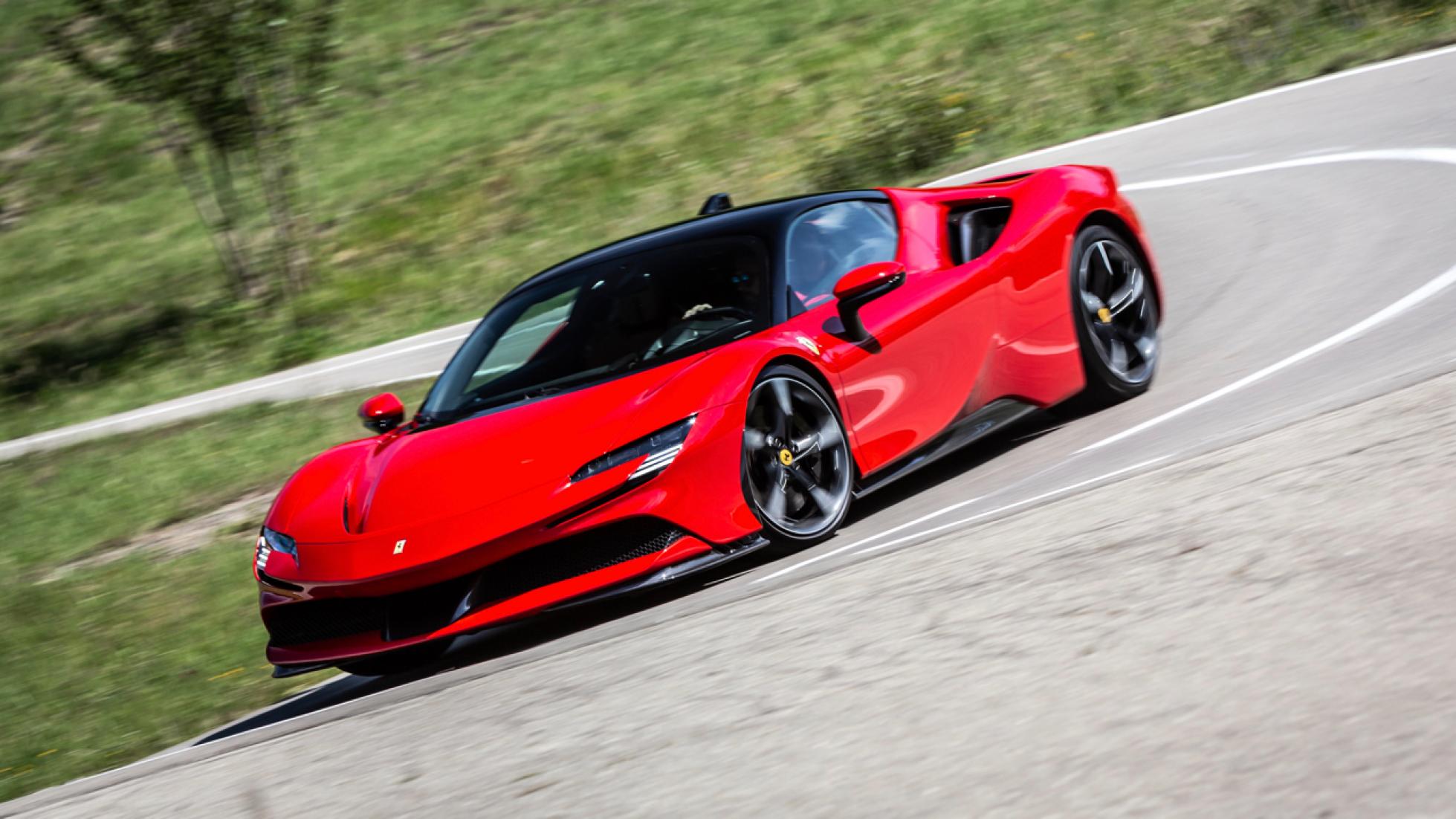 Perhaps surprising, but Ferrari continues to insist that an aluminum chassis suits its needs best. The chassis is substantially modified from the F8, and the rear bulkhead between passenger compartment and engine is carbon fiber, which is 25% lighter and has helped boost torsional rigidity by 20%. We suspect carbon would have been too much of an investment for a series production car at the moment. The day will come, though. 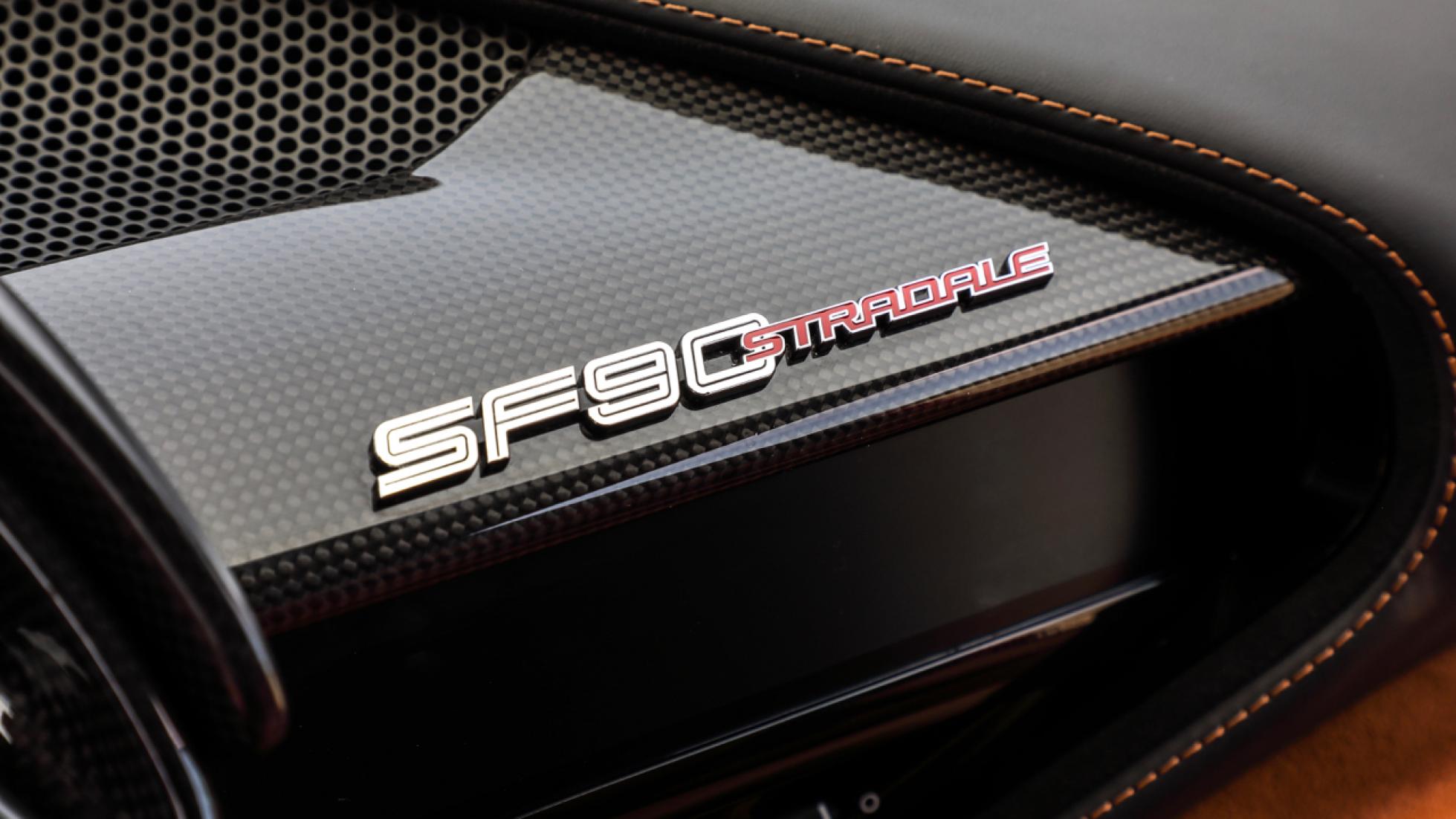 As standard, the SF90 has a 1,670kg dry weight. The Assetto Fiorano pack I mentioned earlier saves 30kg from that. If you then tick all the lightweight options, such as the carbon wheels, you can bring the weight down by a further 70kg. And apparently, there’s a level of extra personalization beyond that, where you can elect to have extraneous items such as the door pockets removed. Needless to say, shedding weight from the car also means shedding weight from your wallet. 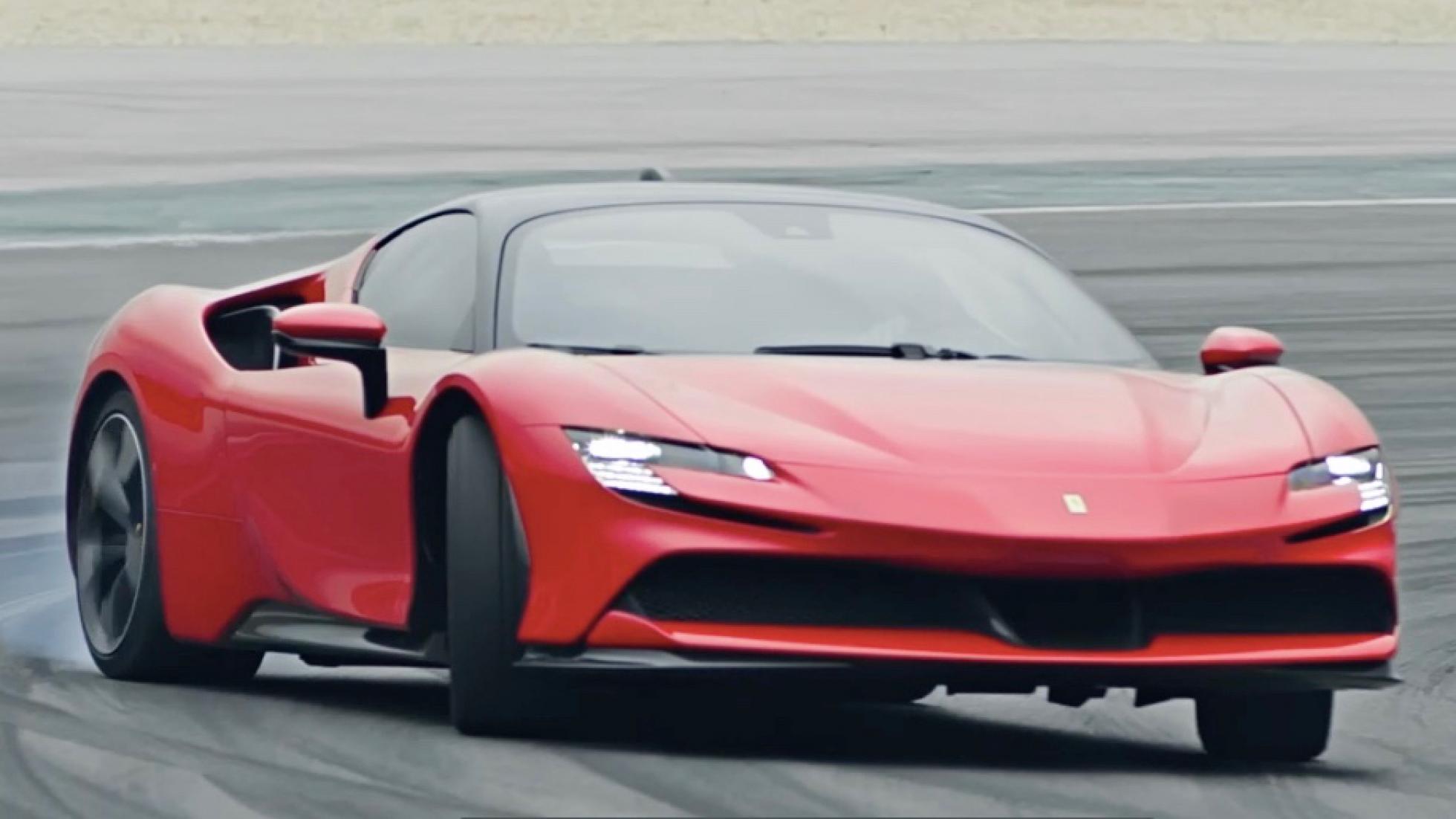 According to development driver Raffaele de Simone, it’s an easy car to drive: “It’s less physically demanding than the 488 Pista, more usable, but still has slight oversteer characteristics with the power on”. Of course it does. That’s because 800 of the 1,000 horses are sent to the back axle, Rafa. 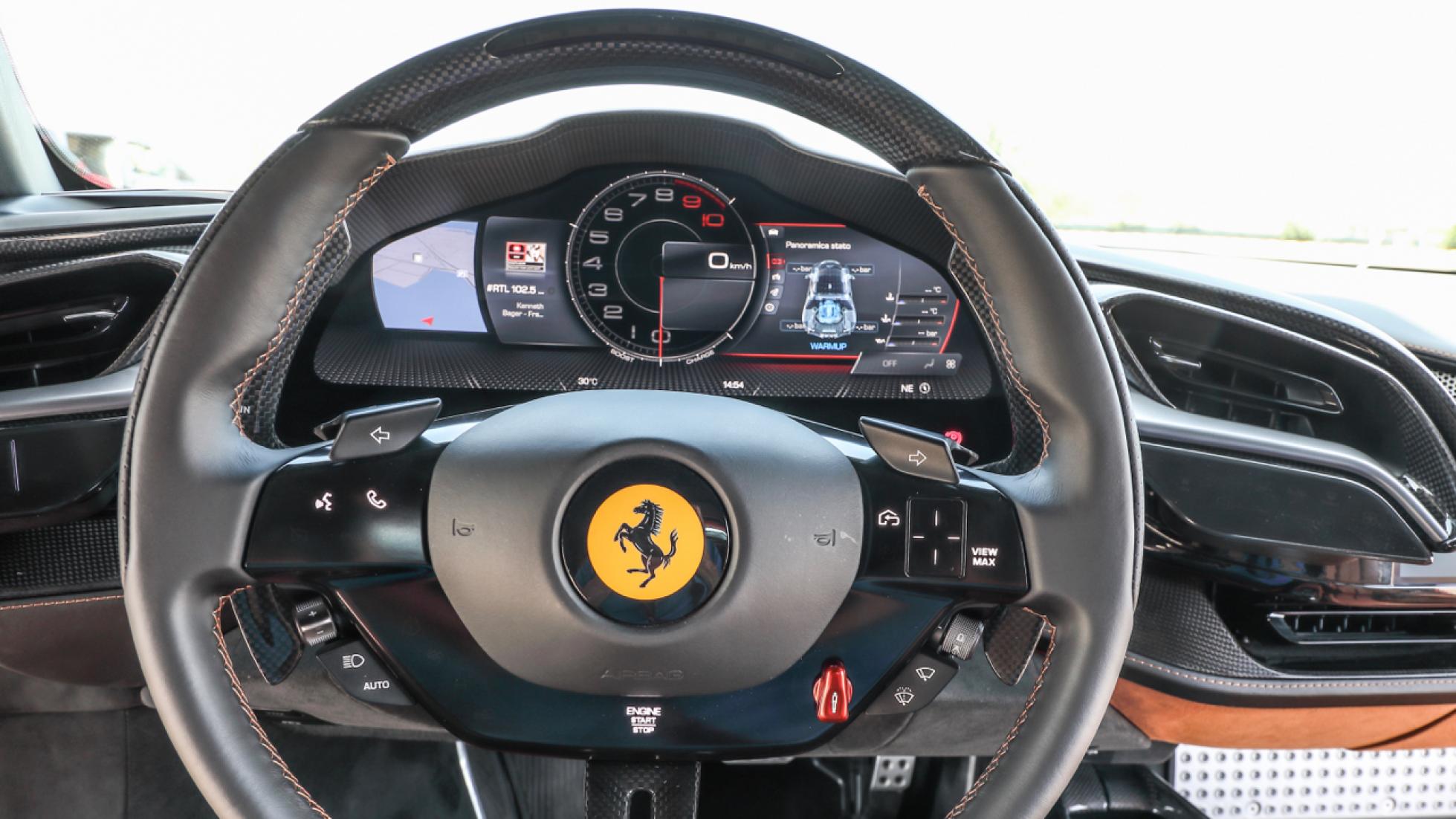 The famous center rev counter is no more. The mechanical dial has been replaced by a 16-inch center screen that’s operated by a thumb swipe pad on the steering wheel. The lower half of the wheel contains a manettino in its traditional position on the right, while on the left, a touch-sensitive panel allows you to choose your hybrid mode. There are four to choose from: eDrive, Hybrid, Performance, and Qualify.

10) It has weight-saving aero. 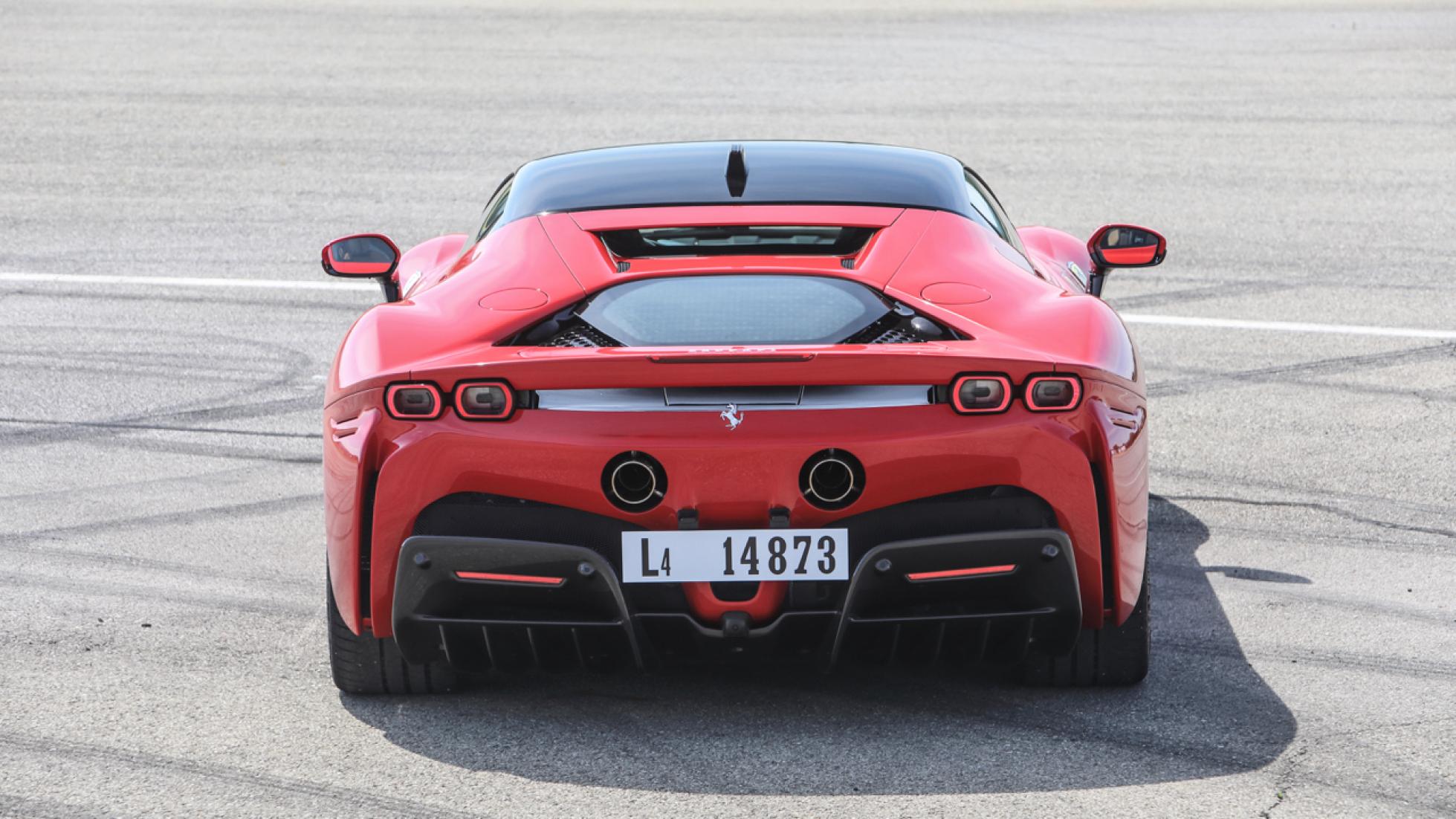 Yes, you did read that right. Besides delivering a total of 390kg of downforce at 250kph, the aero team at Maranello managed to develop a rear wing so clever, they’re patenting it. Instead of it being forced up into the airflow, the main body of the rear wing stays static, and a smaller center section drops down. The motors that do this operation can obviously be much smaller, hence less mass.

There’s no movable aero at the front, but there’s an S-Duct feeding air through the hood and vortex generators underneath. Most significantly, the underfloor of the chassis has been stepped to promote downforce—in the footwell, your feet are 15mm higher as a result. 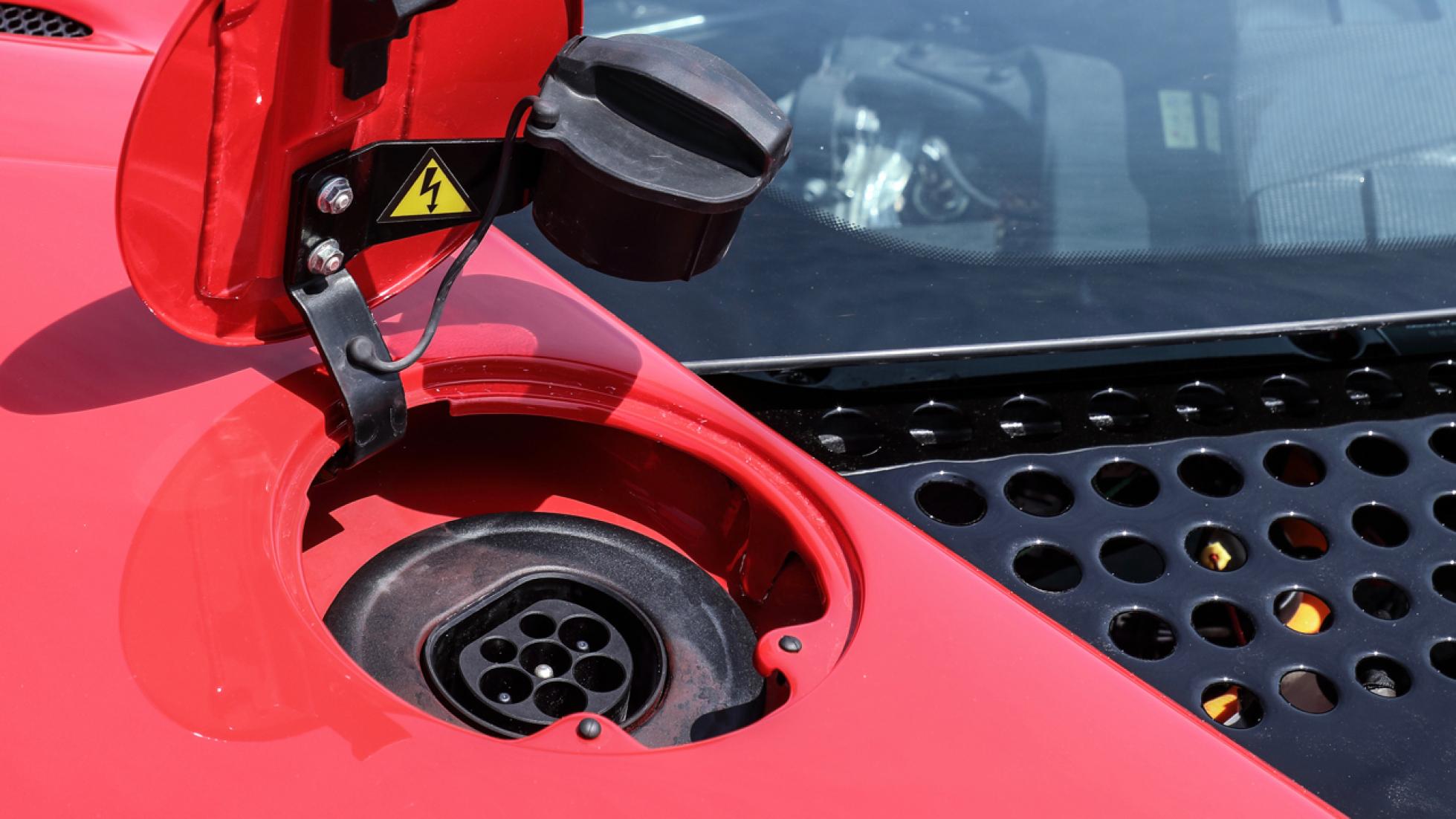 I know, this hardly seems very radical these days, especially since the Porsche 918 Spyder and the McLaren P1 both had this functionality way back when. But for Ferrari to make this leap—to make a turbocharged V8 hybrid its flagship rather than a naturally aspirated V12—is a big step. The first time since the F40, in fact.

But no, you’re not going to be blown away by the e-stats here. With weight a key concern, the battery pack is only 72kg—just 7.9kwh. Still, that’s enough for a range of around 25km and an all-electric top speed of 135kph. Together, the twin motors on the front axle (they’re tiny, each only weighs 12kg), deliver a combined 217hp. And naturally, there’s full torque vectoring to assist cornering ability. There’s an even more enticing end result too: On the WLTP cycle this is a 154g/km Ferrari that returns 19.7km/L. 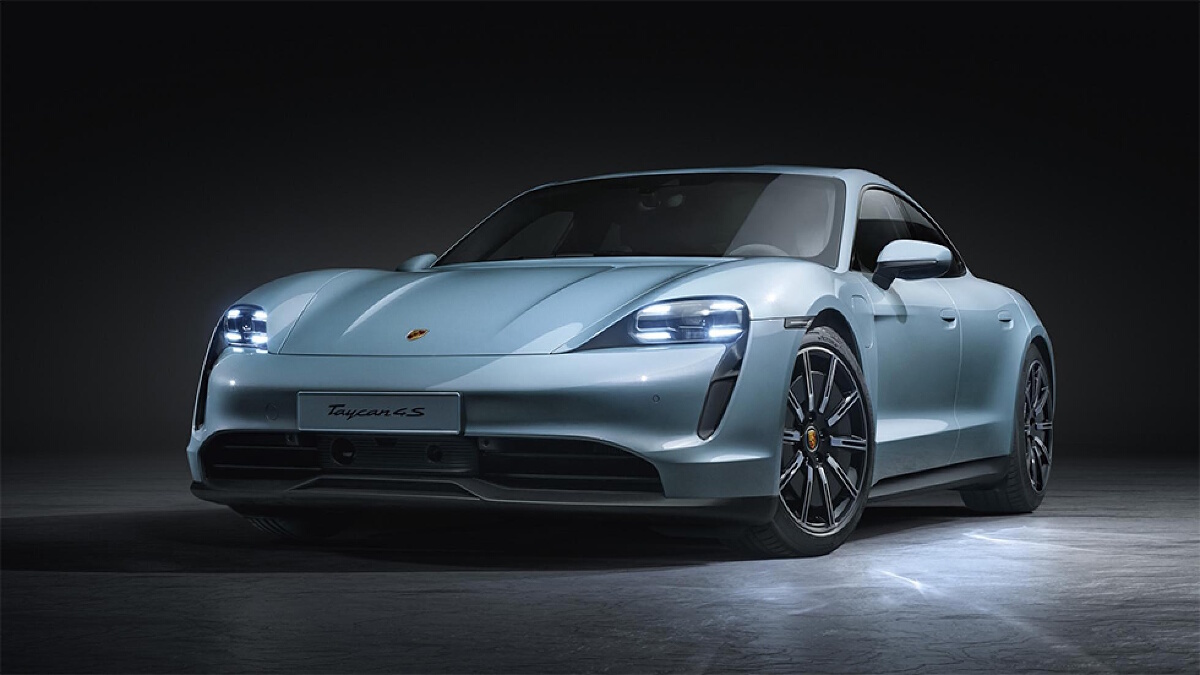 Bored of the usual car color options? Check these out
View other articles about:
Read the Story →
This article originally appeared on Topgear.com. Minor edits have been made by the TopGear.com.ph editors.
Share:
Retake this Poll
Quiz Results
Share:
Take this Quiz Again
TGP Rating:
/20