One of 2020’s headline acts—in the world of cars, at least—has been the Honda e. It’s as overly cute and proudly Japanese as urban transport gets. Or so you’d think…

That’d be ignoring what Honda got up to in the ’80s. Meet the Motocompo, the smallest scooter Honda has ever made. Which is no accident, because what you’re looking at is a bike designed specifically to fold up and squeeze into the trunk of a car. 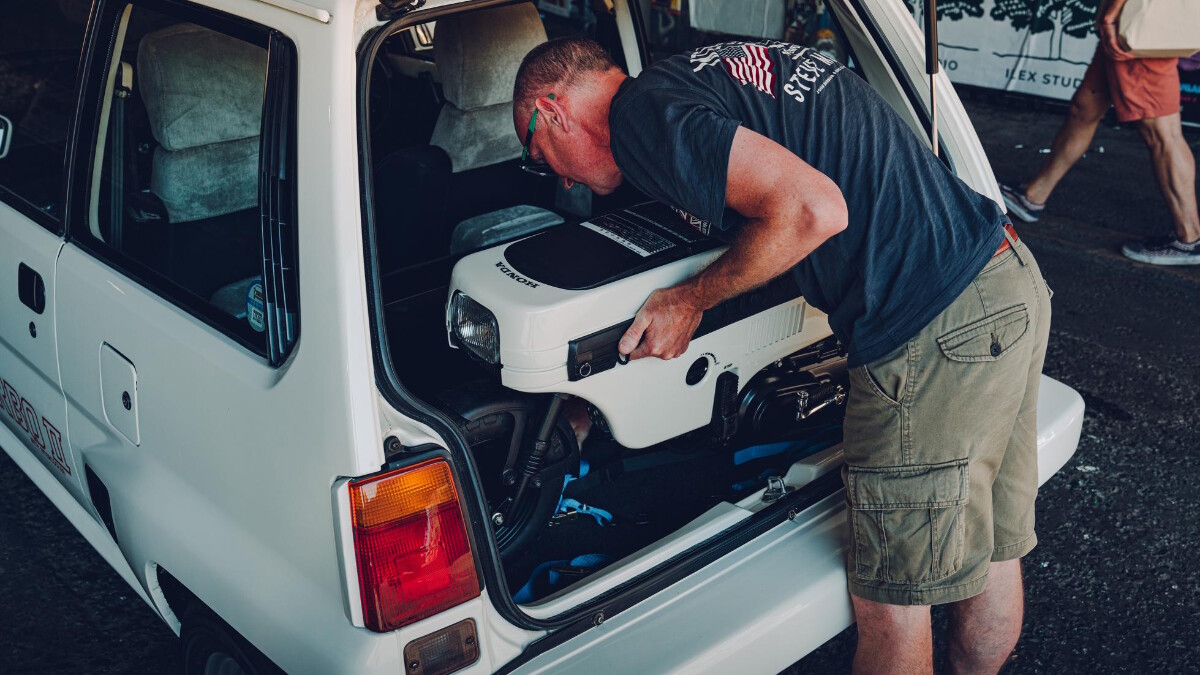 “We advocate expanding new ways of enjoying outdoor life by mounting a motorcycle on a car and acting,” reads the delightfully quaint translation of Honda’s description of the ’Compo. “This was the first attempt in the world to fully demonstrate the strengths of Honda, which produces two-wheeled and four-wheeled vehicles.”

The car it was designed as an accessory to was also small, the City hatchback which is essentially an ancestor of today’s Jazz. So, the ’Compo had to be really small. Folded up, it’s 118cm by 54cm, and sits held in place by a couple of simple harnesses in the back of the City II Turbo. 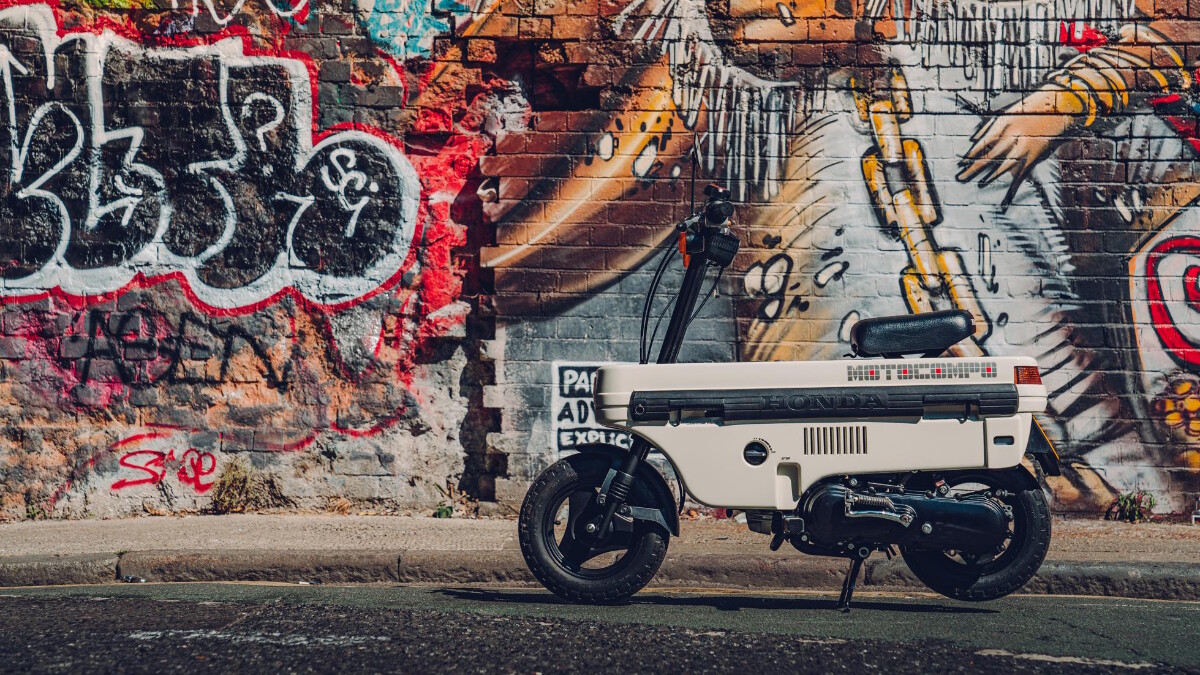 But while it’s undeniably a cute solution to urban gridlock, the process of parking up your car and unfurling the bike it sheathes is far from elegant. The Motocompo may be little bigger than a holiday suitcase, but with a 49cc two-stroke engine and a fuel tank on board, it’s significantly chunkier. It’s about 45 kilos (depending on how much gasoline is in the tank), and unless you’ve spent 2020 bulking up at home, you won’t lift it over the City’s trunk lip with any grace.

Yet it seems little sturdier than a toy as you construct it, always feeling one dimwitted move away from a snapped part and a big bill. Unlock the shaky plastic cover that unveils the handlebars, extend them up, flick the mirrors around and up, then lock the cover back down—now folded in half so you can turn the key in the ignition—doing so carefully so as not to damage something worth a quite jaw-dropping amount of money. 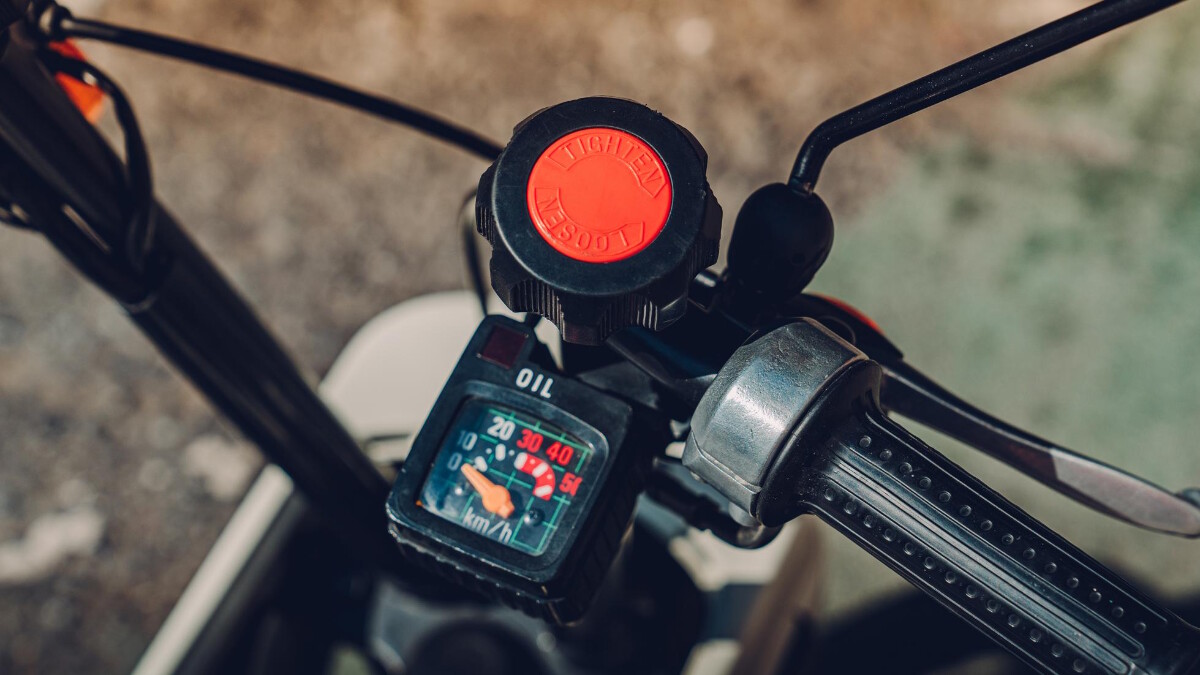 “Restoring the bike has cost me more than it’s worth,” says Richard Reeve, who owns the Motocompo you see here. “Everything from a tire to the plastic cover seems to cost £500 (P32,600).”

You see, for all Honda’s mighty ambition, it wasn’t a resounding success. Far from it. Production lasted just two years, with sales between 1981 and 1983 just tipping over 50,000, when 10,000 a month had been its target. Honda sold 150,000 City units over the same period. The two weren’t sold together, but you could option in the bike when you ordered the car, much like you might add roof bars or mud flaps as a dealer accessory now. It appears few people did, though; while their color schemes are neatly matched, Reeve’s car is three years younger than his bike. 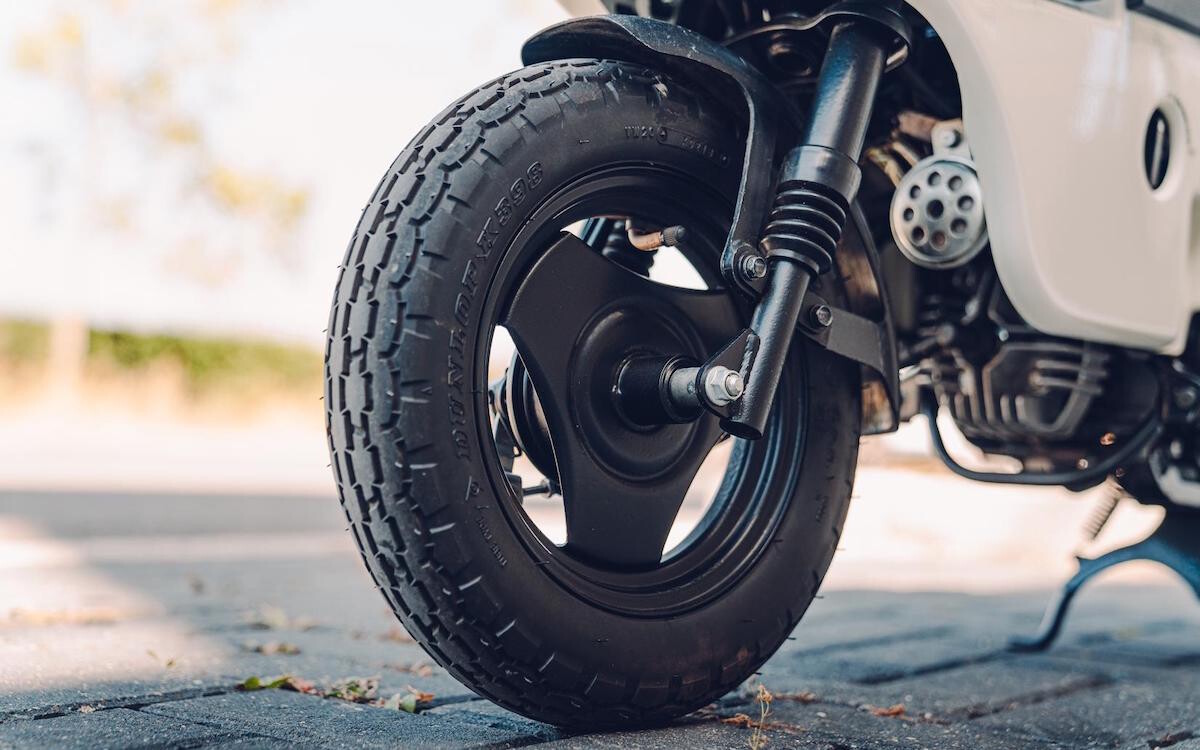 “My job is preserving irreplaceable books, documents, and blueprints. But I also have a love affair with cars and bikes,” he says. “I was looking for a project for winter which is what drew me to the Motocompo. I happened upon one in an auction catalog. I got it for more than I anticipated—about £2,500 (P163,400)—but then it needed restoring. I just wanted it as a project, but it drew me towards the possibility of getting more stuff in Japan. I enjoyed the process, so sourcing a matching car seemed like the next step.”

Getting the parts he needed for the ’Compo was far from easy: “You’re not supposed to export petrol tanks from Japan, so I described it as header tank for a radiator to get it shipped. Its Dunlop tires are unique and I had to source them new in Japan.” 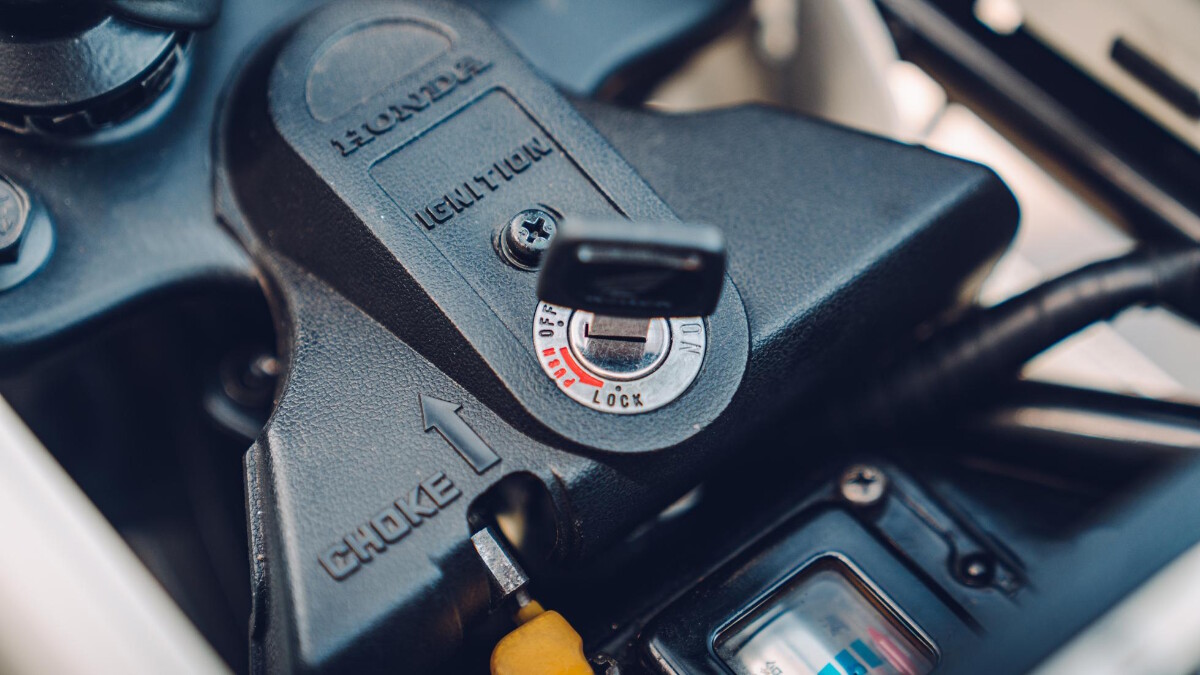 It’s quite a chunk of information for your brain to download as you watch Rich unfurl the bike and flick the stand down, ready for you to straddle across it before noisily rasping around the block resembling a Crazy Frog tribute act. See, for all its hen’s teeth parts that the most minor of accidents may expensively scuff, you’d be a more mature person than I to resist going everywhere flat-out, giggling like a maniac in the process.

With the engine having a 2.5hp output, its top speed is fairly dependent on the size of your breakfast and what you’re wearing, so strict performance figures aren’t something I can roll out. Aim for 30kph if you’ve tucked your helmet down and there’s a decent tailwind, or around 25kph when you’re laughing so hard you need to stay bolt upright to have any chance of seeing where you’re going. 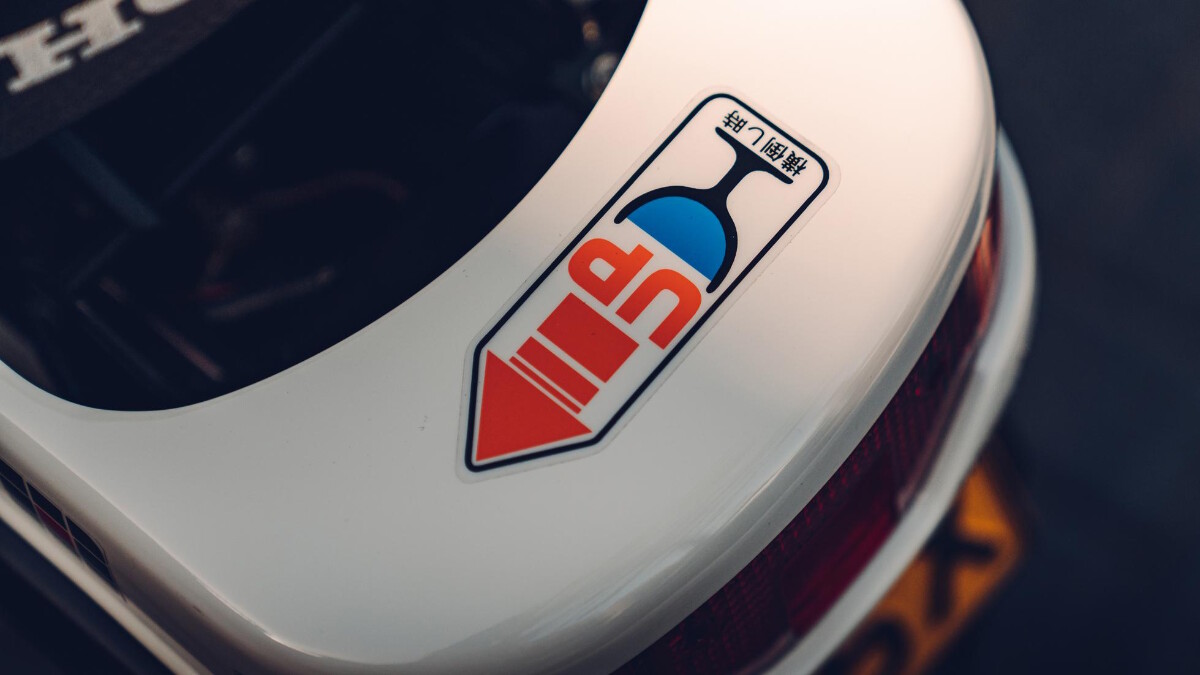 Perhaps the slowest Vmax figures ever posted on this publication, and yet they’re right up there with the most thrilling, too. Every kph is so hard-won that you’ll be damned if you see the needle on the Insta-friendly square speedo drop by as much as a nanometer. Even when there’s a speed bump looming, looking ready to eject you from the bike as if you’re the loosely placed plastic saddle at the climax of a game of Buckaroo.

I can see why it failed. Not because it’s not fun—quite the opposite. It’s basically a trinket, a toy that’ll make you strew cones across your garden and host unwise time trials with your mates. Because even in light city traffic, it’s hard not to feel like a minnow among the trout. In the throng of Tokyo’s jams, it must be petrifying. A shame, as with the scooter’s dinky size yielding an 130km range from its half-gallon tank, it’ll go almost as many kilometers as a fully-charged Honda e. It’s so close to being perfect urban transport. 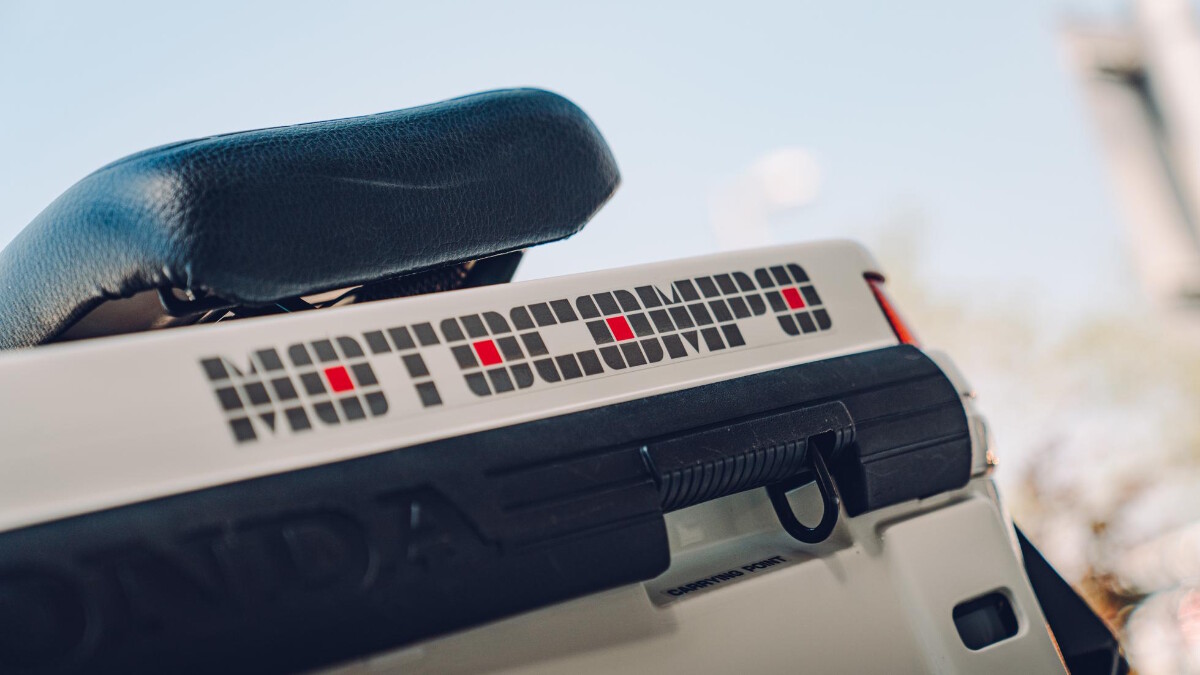 The automotive world is an odd place—one that celebrates stylish failure almost as much as rampant success. Cult heroes, a small subsect the Motocompo sits in with pride. Let’s just hope buyers flock more willingly towards its distant four-wheeled descendant, the adorable Honda e.

Then 2020 could leave some kind of positive legacy, huh? 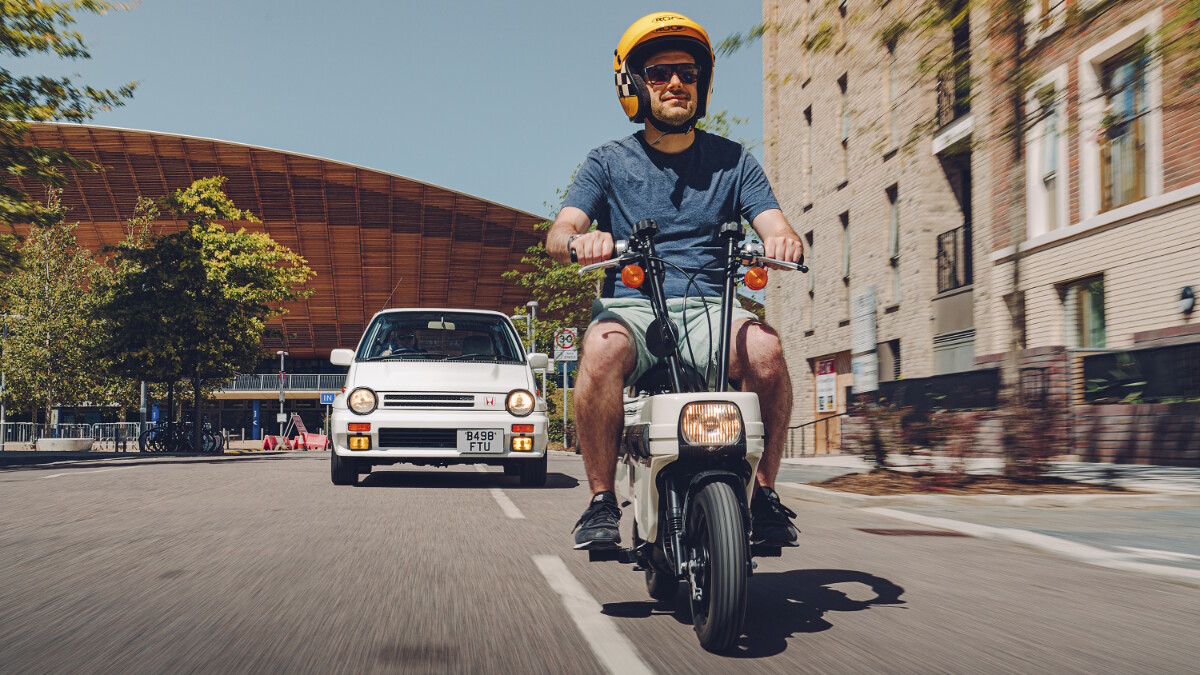 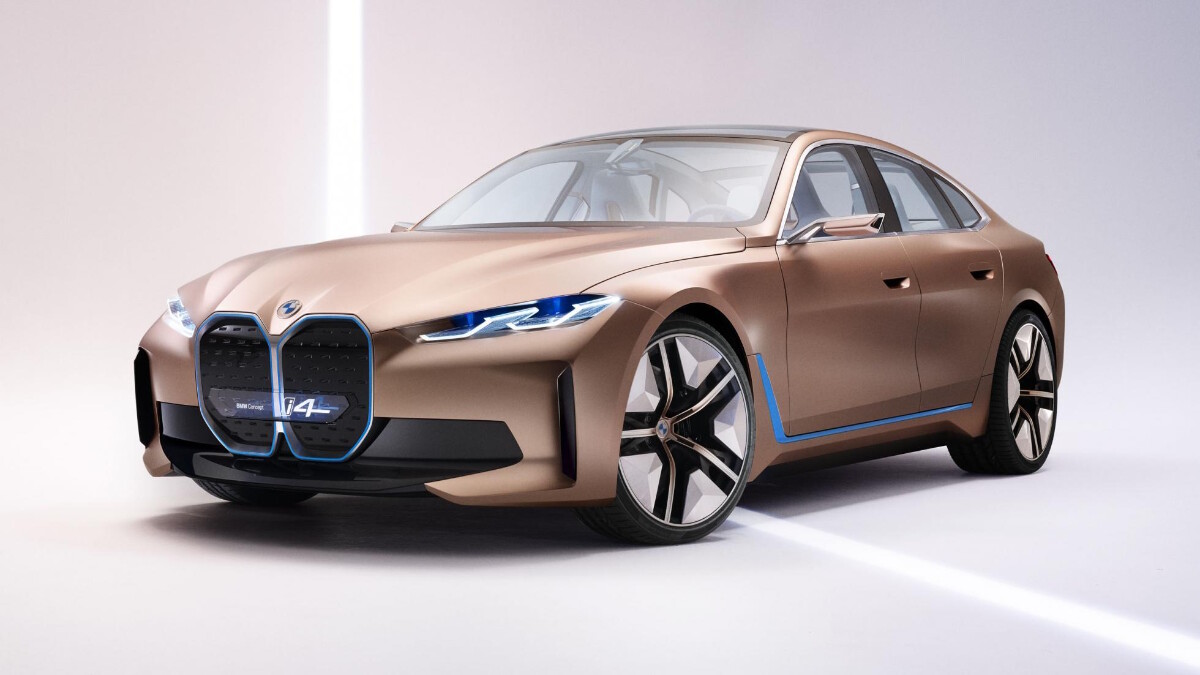 Gallery: 2021’s Most exciting and controversial new cars, part two
View other articles about:
Read the Story →
This article originally appeared on Topgear.com. Minor edits have been made by the TopGear.com.ph editors.
Share:
Retake this Poll
Quiz Results
Share:
Take this Quiz Again
TGP Rating:
/20