An exclusive interview with our EIC
by Vernon B. Sarne | Aug 29, 2014
CAR MODELS IN THIS ARTICLE 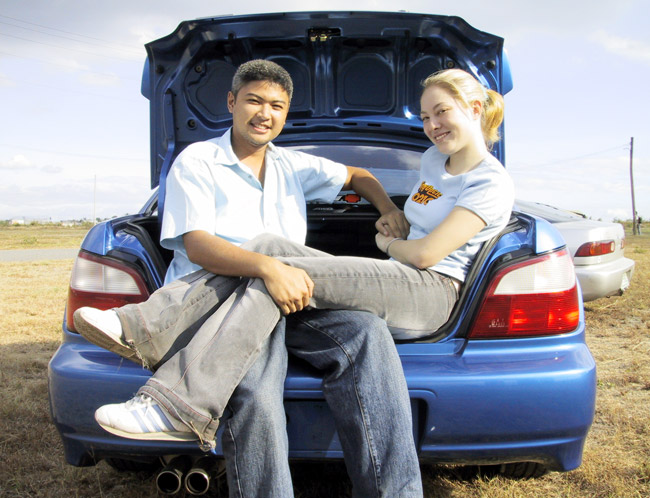 Right after race car driver Enzo Pastor was shot dead near midnight of June 12 this year, the rumor mill started turning. And it turned dizzyingly fast. There were theories, guesses, suspicions--all passed around the motorsports community in muffled conversations, each discussant careful not to directly accuse anyone, especially since the subject was someone dear to the victim.

In the wee hours of June 13, shortly after the murder, a source with access inside Pastor's circle of friends already relayed to me that one of the angles being looked into was the affair of the victim's wife, Dalia Guerrero, with another man. It sounded preposterous at the time--it still does today, to be honest--regardless of all the stories circulating about the wife's, er, dalliances. Having an affair is one thing; having your own husband killed is a kind of crookedness I wasn't prepared to attribute to a sweet-looking mother of two.

And so, when we broke the news on this website, it was simply a narration of collected information. I had pretty much decided that every single thing I'd heard (and would hear) about Dalia from that point until the time Enzo was buried, would never see the light of day on TopGear.com.ph.

Last Tuesday, August 26, Domingo "Sandy" de Guzman III--the man they say Dalia had (or is still having) an affair with--was arrested after the supposed gunman had named him as the mastermind who had paid the total sum of P100,000 to have Pastor eliminated. And then the police announced that they had established the romantic link between de Guzman and Guerrero, and that Guerrero was, in fact, officially a suspect in the case.

As I write this, Guerrero remains at large and is nowhere to be found. To all those who weren't privy to the aforementioned whispers, this came as an absolute shock. Is she or is she not guilty?

I don't know. What I do know is that I interviewed Enzo and Dalia as a very young couple in 2004, when he was 22 years old and she was 18. At the time, I had just been hired by The Manila Times as its motoring editor. Wanting to publish more interesting stories than your usual motoring fare to inject life into my section, I asked the pair if I could feature them in a Valentine's Day special. They enthusiastically agreed.

We did the photo shoot in Bonifacio Global City, near the now-defunct Manila Speedzone karting facility. Below is a verbatim rehash of the interview that came out in my former newspaper in February 2004. The photos you see here were also used for the article. My title for the piece was "Twice As Fast."

Amid the emotional and psychological turmoil that I imagine is now tormenting every person connected to Enzo and Dalia, it might be nice to recall that their relationship started out just like any other would: genuinely affectionate, youthfully innocent, steadfastly hopeful. I read their words now and can't help but feel dispirited. Ten years ago, I would have sworn those two would live blissfully ever after.

The 2004 interview begins after the break.

He: 2002 Asian Formula Renault champion. She: a fierce contender in last year's Ford Lynx Cup. Both so young and so in love, 22-year-old Enzo Pastor and 18-year-old Dalia Guerrero are setting ablaze not just the racetrack but virtually every place they promenade in. Five minutes with this playful couple and you're transported all the way back to high school--or college, depending on the first time you had butterflies fluttering in your stomach at the thought of romance.

Showing up for the shoot both in baby blue tees, Enzo, a consular and diplomatic affairs student at the College of Saint Benilde, and Dalia, currently a full-time race car driver, make that quintessential handsome pair. Their combined presence is so pleasantly mushy that you can feel even their cars (Honda Integra for Enzo; Subaru Impreza WRX for Dalia) blushing.

The couple--barely a couple of months into the relationship--is now spending as much time together as they can. They know that when they buckle down to their respective race series later this year, romance might just have to take a back seat. For 2004, Enzo is seriously considering Formula BMW, while Dalia is set to enter production classes at Subic International Raceway and Batangas Racing Circuit.

QUESTION: When did the two of you first meet?

DALIA: We met at the NBC Tent during a rave party. He was there with another girl, and I was there to promote the Ford Lynx Cup. And he asked me, "You race?"--with such an attitude like he could never believe in a million years that I could drive. I thought he was a total a**hole, but I guess my opinion of him has changed since then.

ENZO: I wasn't with another girl. I was with my friends.

D: It was another girl!

E: She was my cousin's ex. Anyway, I went over to [Ford Lynx Cup organizer] JP Tuason to bug him. Then this girl named Dalia had herself introduced.

D: Excuse me! I'm not like that. You were looking at me, so JP introduced us. You wanted to know who I was. Don't lie. You know I looked good.

E: Fine, she looked good. She was glowing.

D: Shut up! You wanted to get my number and you know that. You chased me. You went to BRC just to see me.

E: But who asked me over the first night?

D: Okay, fine, we are even. Next question.

Q: How did the courtship go exactly?

E: She seduced me.

D: That was so easy. All I did was talk to him.

D: Yeah, but you bought me a drink--at the party of the guy I used to date. Hah!

E: It worked. You got my number from him.

Q: Did the fact that both of you are racers, make the courtship easier?

D: We got to spend more time at the track, and got more time to see how each other was at our best and worst. And we have a lot of things in common. Not a lot of people in love have something that they both love to do and can do together.

Q: Did your respective cars play a role in the development of your relationship?

D: No, my Subaru and your beat-up Integra! I think the cars that we drive every day didn't play a part in it. I feel that as long as a car looks decent, has aircon, and gets you from point A to point B comfortably, that is fine. Wait, does your car do that?

E: Most of the time. It hasn't broken down on us.

Q: When you go out, who usually drives? And whose car?

D: Using my car though. It's more dependable--and not that noisy.

Q: Tell me the stuff I would find inside your partner's car.

D: No, that's your car. I vacuum my car; you just bring the dirt in.

E: I thought what was yours was mine, and what was mine was yours?

D: Nah. What's yours is mine, and what's mine is mine! Just kidding. Of course, we share everything. But he usually has a polo, the magazine in which I'm featured--and dirt.

E: She's actually kikay. Aside from her racing stuff, she has two pairs of shoes and a couple of shirts, vitamins, and drawings of dresses.

D: I have CDs, a lot of normal stuff, and a thick novel that I read when I bring him to school. I read so I don't get bored when I wait for him.

E: You only wait for me at school so the girls won't hit on me.

Q: Have you raced against each other?

E: On the track, time-wise. On the streets, I make her feel good.

D: Well, on the streets, the car plays a big role, and my having a turbocharged car is an unfair advantage for me. So I take advantage and win. I have to win sometimes, right?

E: It's funny how you can't leave me.

D: Well, hon, I could, but that would deflate your ego too much. And I want to make sure that you're okay, so I keep you within sight.

Q: Dalia, do you think you can beat Enzo on the racetrack?

D: One day, I will. I'm only 1.2 seconds off his time when we use the same car. And that was only the second time I drove the car.

E: Yeah, blindfolded at that.

D: Honey, you know that you don't have to tell everyone about my training secret.

D: But I must admit without Enzo training me, I wouldn't have been able to progress this fast. He is more to me than just the love of my life. He is also my mentor in life and racing. He makes me push myself to the limit and beyond.

Q: Enzo, would you ever give Dalia's Impreza a car wash?

E: I actually do. She likes watching me when I get wet.

D: I don't think I would be able to finish washing Enzo's car. It would end up in kisses and a car full of suds.

Q: What is it about your partner's driving that irritates you the most?

D: He releases the clutch too fast, and the car jolts forward--and the fact that it's usually my car that he is driving. And he squeezes my car into all the little gaps on the road. It's scary because aside from Enzo, that is my other real love--that car is my baby.

E: She is too uptight, and her line of sight is very narrow and short.

D: Well, who was the one who drove over a big log in the middle of the highway? You can't say that my line of sight is as bad as yours. I don't run over things like that.

E: There was a truck that I thought was going to swerve into our lane.

D: Well, I saw both the truck and the log!

Q: Both of you are lookers, and it wouldn't be a stretch to assume that you both have your share of aggressive fans. How do you deal with your partner's admirers?

D: I wait outside school for them. Seriously, they can look at him and take pictures of him, but if they try anything, they know they're dead. They can admire from a distance.

E: Ferrari 550 Maranello for daily driving, Range Rover for my weekends out of town--the Hummer H2 is too big--and a gull-wing Mercedes-Benz for my Sunday driver.

D: McLaren F1 for my Sunday drives, Nissan Skyline GT-R for my everyday car, and a Merc SLR for when I go shopping. 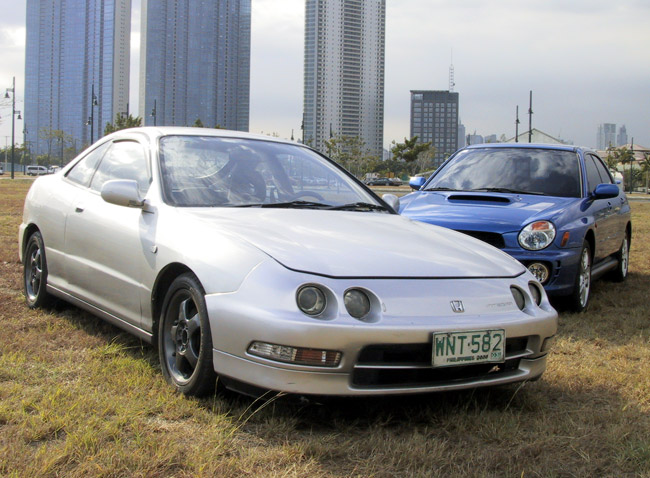 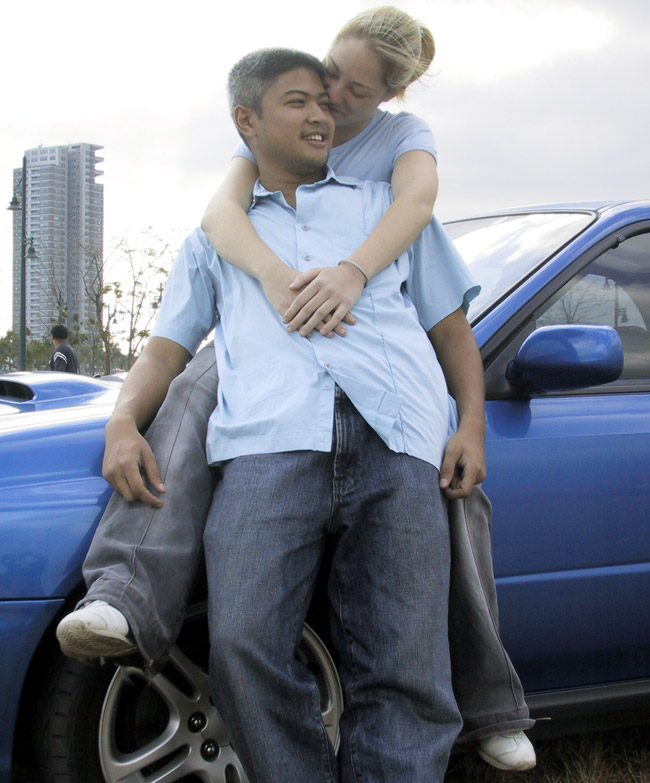 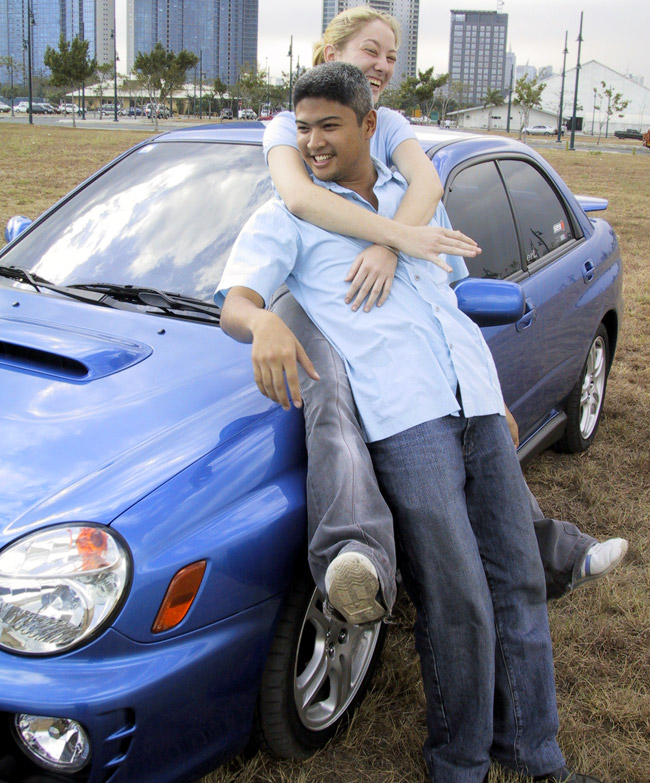 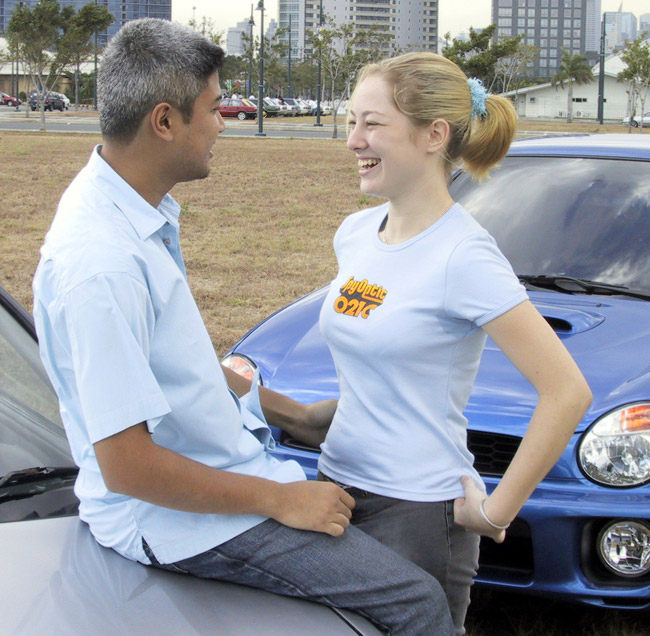 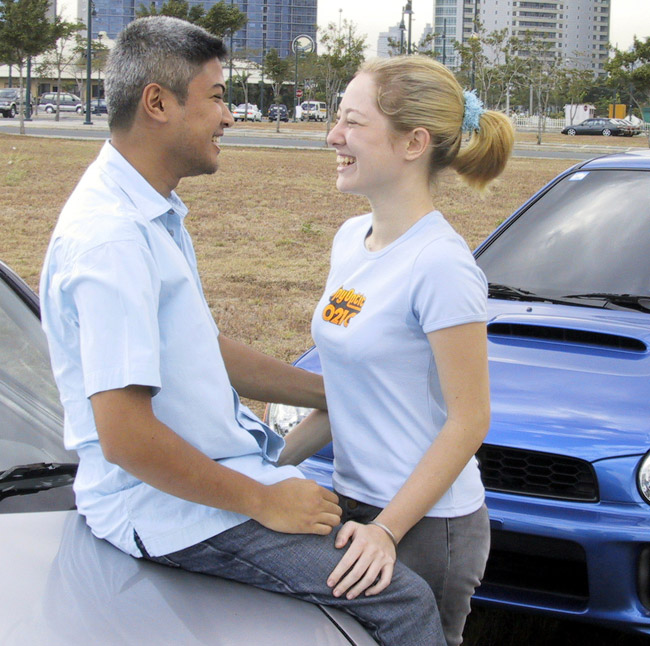 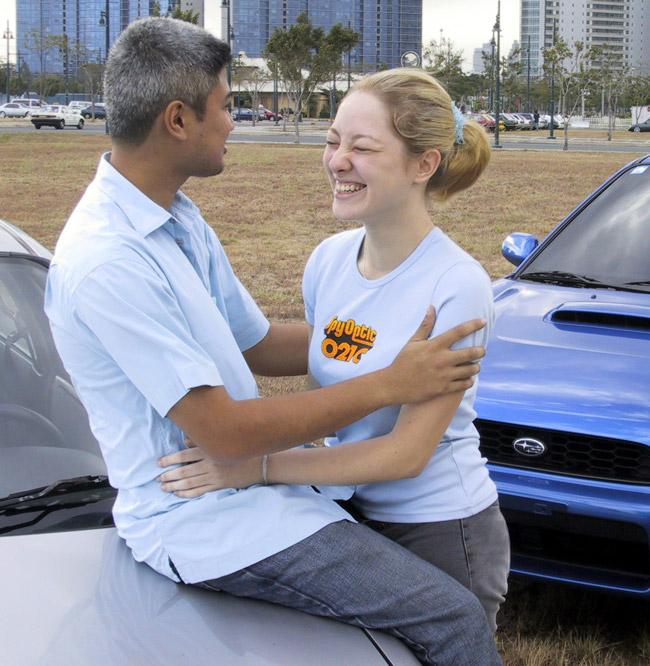 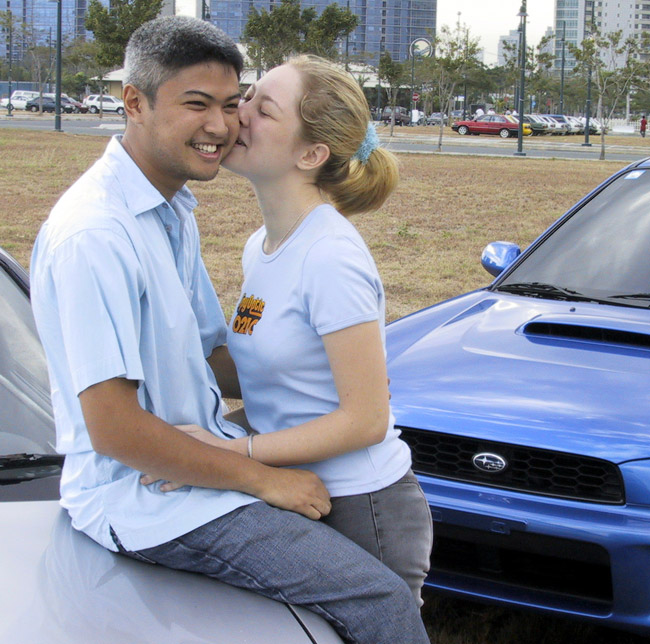 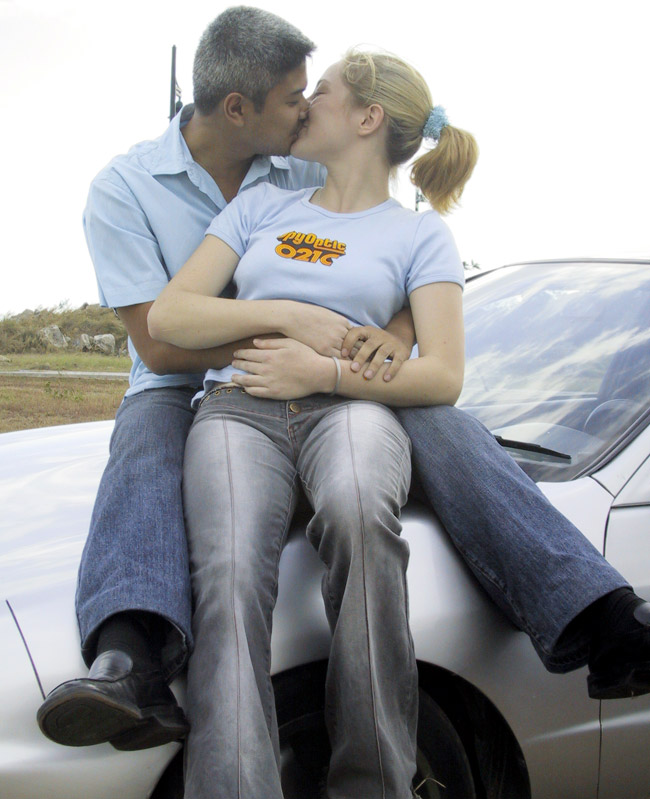 Instagram post of the day: Spirited driving looks and feels electric
View other articles about:
Recommended Videos
Read the Story →
This article originally appeared on Topgear.com. Minor edits have been made by the TopGear.com.ph editors.
Share:
Retake this Poll
Quiz Results
Share:
Take this Quiz Again
TGP Rating:
/20