There’ll never be another character like him
by Adam Waddell | Dec 12, 2021

1) He’d only competed in 23 car races before making his F1 debut.

He might have been karting since the age of 10, but remarkably, Kimi had only raced cars on 23 occasions (three in Formula Ford and 20 in Formula Renault) before he joined the grid for the 2001 Australian Grand Prix. Bearing in mind that in 2000, a Formula Renault car was powered by a 185bhp engine from a Renault Clio, the step up to a 800hp+ Sauber Formula 1 car was a big one. However, Raikkonen took to F1 incredibly quickly, being on the pace of Sauber’s regular drivers on just his second day in testing. There were many who voiced concerns about granting an F1 Super Licence to a driver with so little experience, but Sauber signed him for the 2001 season regardless.

It was Ron Dennis that gave Kimi the nickname of ‘Iceman’ when he was driving for McLaren, but his laid-back approach and ability to remain unfazed by anything F1 could throw at him were never more evident than on the day of his F1 debut in Australia 2001. You might have expected a 21-year-old with so little experience to be anxiously pacing up and down the garage 30 minutes before the start of his first race. Not Kimi, though—he was fast asleep in the Sauber motorhome. Having qualified just three-tenths of a second slower than his much more experienced teammate ‘Quick Nick’ Heidfeld, he scored a point with a sixth-place finish in his very first F1 race.

Speaking recently on the ‘F1: Beyond the Grid’ podcast, Fernando Alonso had this to say about Kimi: “He’s a very good character in Formula 1 and we will miss him...he’s very honest, he’s not playing any games, he’s what you see. A part of this may be a mask that we see from him, of being very cold and not talking too much. There is a different person I think inside...not the Iceman. I think he’s quite warm inside, even if you need to meet him outside of racing, it’s when you see the real Kimi.”

4) He tells it like it is and always makes us smile.

Kimi might not be known as F1’s chattiest driver, but when he does speak, he comes out with some real corkers. In an era when most drivers are terrified of upsetting their bosses and sponsors, he doesn’t seem to care. Here are a few of his most famous quotes:

5) He’s monumentally smart when it comes to money.

His manager will probably want to take some credit here, but despite winning just the one championship, Kimi has become phenomenally wealthy. His net worth has been estimated at between $200 million and $250 million. Only Alonso, Hamilton, and Schumacher have earned more from the sport, and in 2009, he was said to be the second highest-paid sportsperson in the world after Tiger Woods.

One of his most impressive deals was the one with Ferrari for the 2010 season. The team had both Massa and Raikkonen under contract, but desperately wanted Fernando Alonso in the car. The solution was to offer Kimi a reputed £20 million not to drive that year.

Then there was the time that he nearly bankrupted the Lotus team. When Kimi signed his two-year deal with Lotus, he was to receive both a salary and a points bonus. The team clearly wasn’t confident that it would do particularly well because they apparently agreed to pay €50,000 per point scored. Kimi went on to finish on the podium 13 times and win twice, scoring 390 points over the two years. That would have meant a bonus of €19.5 million!

F1 drivers tend to come up through the single-seater ranks, and then after a grand prix career, simply either retire from the sport altogether or dabble in sports cars for a while. However, when Kimi was on his two-year sabbatical from F1, he raced anything he could get his hands on, including snowmobiles, NASCAR, and World Rally Championship cars. It’s not as if he needed the money...

Modern F1 drivers are athletes backed by huge corporate sponsors, so partying doesn’t really go with the territory. We’re not sure that Kimi got that memo. In 2013, Kimi is said to have gone on a 16-day bender between the Bahrain and Spanish Grands Prix.

“That whole summer was more or less racing and partying,” he said. “It’s nothing new; for me it’s normal. Outside it might look a bit weird, but for me, in the past, it was a very normal story.” Kimi finished on the podium in both of those races.

Or how about this story from 2004 when Kimi was racing for McLaren? @TheBishF1 posted this story on Twitter on November 30: “On this day in 2004, Kimi apologized after being seen riding an inflatable dolphin outside a Gran Canaria nightclub. ‘I’m sorry,’ he said. ‘I had a few drinks, I was dancing. Why was I riding an inflatable dolphin? Because why not?’” Ron Dennis was his boss at the time. We suspect he was not amused.

Asked if he felt that partying had ever had a negative impact on his career, he replied: “Absolutely not.”

James Hunt had a famous disregard for convention and loved a party, so perhaps it’s no surprise that Kimi is a fan. He has used ‘James Hunt’ as an alias when entering snowmobile races, and for the 2012 Monaco Grand Prix, he raced with a helmet sporting a paint job that was a replica of Hunt’s own helmet design from the ’70s, including the 1976 World Champion’s name in large letters.

In episode seven of Series 18 back in March 2012, Kimied join Jeremy Clarkson as the ‘star in a reasonably priced car.’ He wasn’t particularly quick in the Suzuki Liana, but to be fair, it was ‘extremely wet’ that day. Regardless, for a man who has talked about hating giving interviews, he entered into the spirit of things and gave us a lot of laughs.

But the main reason why we love Kimi is that he’s a proper F1 driver. As the 2007 world champion, his name will forever feature on a list that includes the likes of Fangio, Clark, Stewart, Senna, Schumacher, and Hamilton. Kimi deserves his place among the greats—he’s fast, committed, and supremely talented, but most of all, he clearly loves F1. With the exception of Schumacher and Alonso, no other driver has still been competing at this level 14 years after winning their first championship. 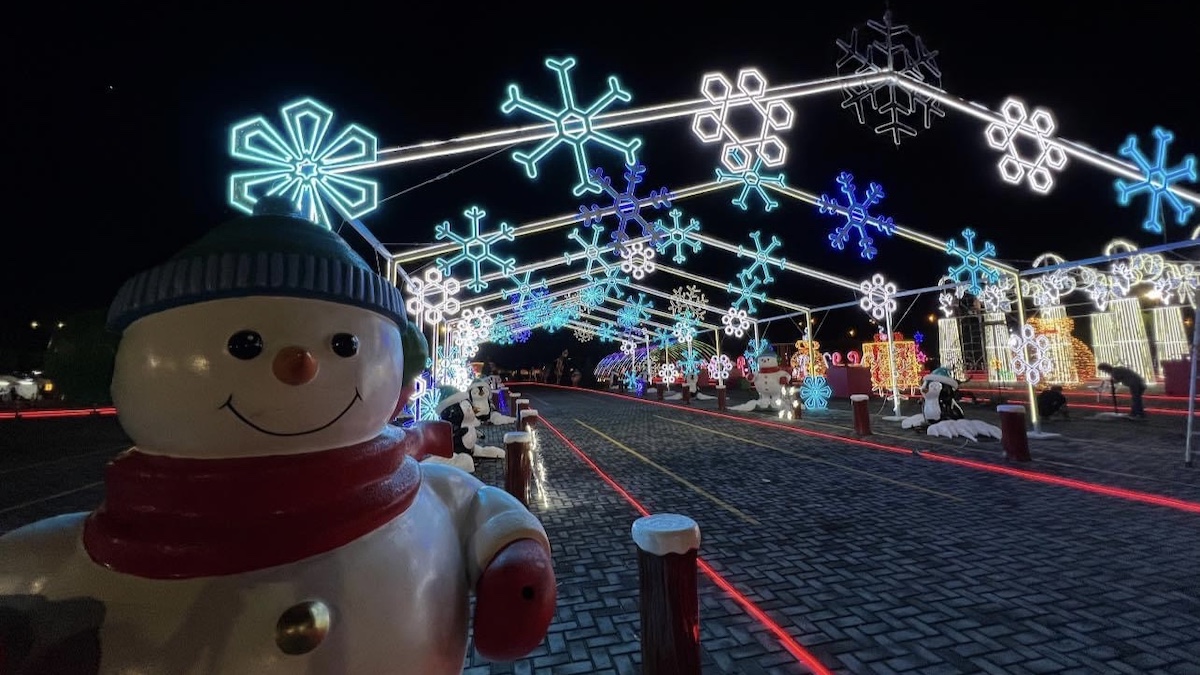 This drive-through Christmas installation is now open at SM Mall of Asia
View other articles about:
Read the Story →
This article originally appeared on Topgear.com. Minor edits have been made by the TopGear.com.ph editors.
Share:
Retake this Poll
Quiz Results
Share:
Take this Quiz Again
TGP Rating:
/20