There's a new Guinness World Record for tightest parallel-parking ever

For a lot of drivers, squeezing their vehicle into a parking space with just a couple of inches to spare is a feat worthy of a good pat on the back. Because let's face it, for a lot of people, parallel-parking is easier said than done.

It's a skill that takes practice and a good sense of spacing and positioning to perfect, and even then there are just some spaces you'll find impossible to maneuver into--unless you're Alastair Moffatt, the best parallel-parker in the world.

Alastair, a stunt-driving specialist, has set a new Guinness World Record for the tightest reverse parallel-parking with a combined distance of just 34cm between his classic Mini Cooper and the vehicles in front and behind. That's just roughly over a foot. He beat the previous record-holder Ronny Wechselberger by just 1cm.

What's even more astounding is the manner in which he accomplished the feat, which you can watch in the video above. His post-stunt celebration is enough reason to watch the clip.

The stunt driver and multiple record-holder said he was thrilled with his new record, adding that a lot of strategy went into accomplishing the feat. "I am so thrilled that I was able to achieve a Guinness World Record today--especially on Guinness World Records Day," he said. "It doesn’t get much better than that. A lot of planning, dedication and, of course, parking went into today’s successful record attempt."

Congratulations, Alastair! Now that we come to think of it, Moffatt's ridiculous parking technique might come in handy in our streets. Because at the rate cars are filling them up, decent parking spaces are going to become increasingly difficult to come by. 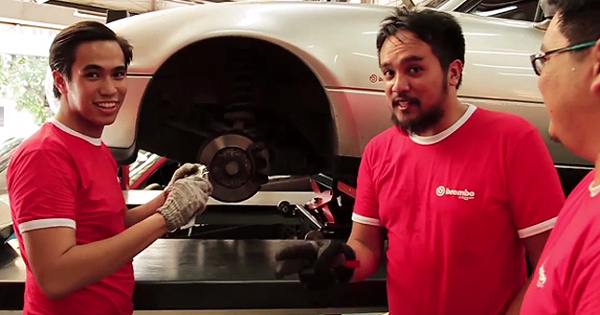 Video: How to keep your brakes in tip-top shape
View other articles about:
Read the Story →
This article originally appeared on Topgear.com. Minor edits have been made by the TopGear.com.ph editors.
Share:
Retake this Poll
Quiz Results
Share:
Take this Quiz Again
TGP Rating:
/20