Feast your eyes on the new Ferrari Daytona SP3

It has the richest back catalog of all, but Ferrari will never do a ‘continuation’ car. That doesn’t mean heritage is off-limits, though, which is where the Icona series comes in. Meet the Daytona SP3, a limited series, carbon-fiber-bodied, and mid-engined V12 two-seater fueled by memories of the spectacular late ’60s/early ’70s Sport Prototipo era, and the 1-2-3 result in 1967’s Daytona 24 Hours race in particular. Ferrari will make 599 examples, each costing €2 million (P114 million) including taxes. Inevitably, they’re all already spoken for, with deliveries due to start at the end of 2022.

That finish in ’67 was memorably choreographed so that the three cars—a P3, P4 and 412 P—could take the checkered flag in unison. Payback, if any were really needed, for the rout Ferrari suffered at the hands of Ford and the GT40 six months previously at Le Mans. That explains the new car’s name, which was something that was hotly debated internally at Ferrari.

Why? Because a new Ferrari Daytona is obviously going to invoke the memory of the, er, original Ferrari Daytona, the sharky modernist masterpiece front-engined GT that arrived in 1968 and set the company on a whole new design path. Except that it was never officially called Daytona, and is known instead by the less catchy handle 365 GTB4. “We think the name perfectly captures the Icona concept,” vice president for sales and marketing Enrico Galliera tells Top Gear. “The Daytona result was Ferrari’s revenge on Ford.”

Here endeth the history lesson. Because, like the Monza SP1 and 2 Icona cars that preceded it and despite its inspiration, the Daytona SP3 is further proof that Ferrari is fully future-focused and pathologically opposed to retro. Chief design officer Flavio Manzoni has long cited the 330 P3/4 as a personal favorite, but he’s really stretched out on this one. “I think this is the best car I’ve ever been involved with,” he tells us during a preview event at a secret venue in Florence. “It’s a futuristic interpretation of a classic sports prototipo, and a perfect showcase for what the team at Ferrari Centro Stile can do.” 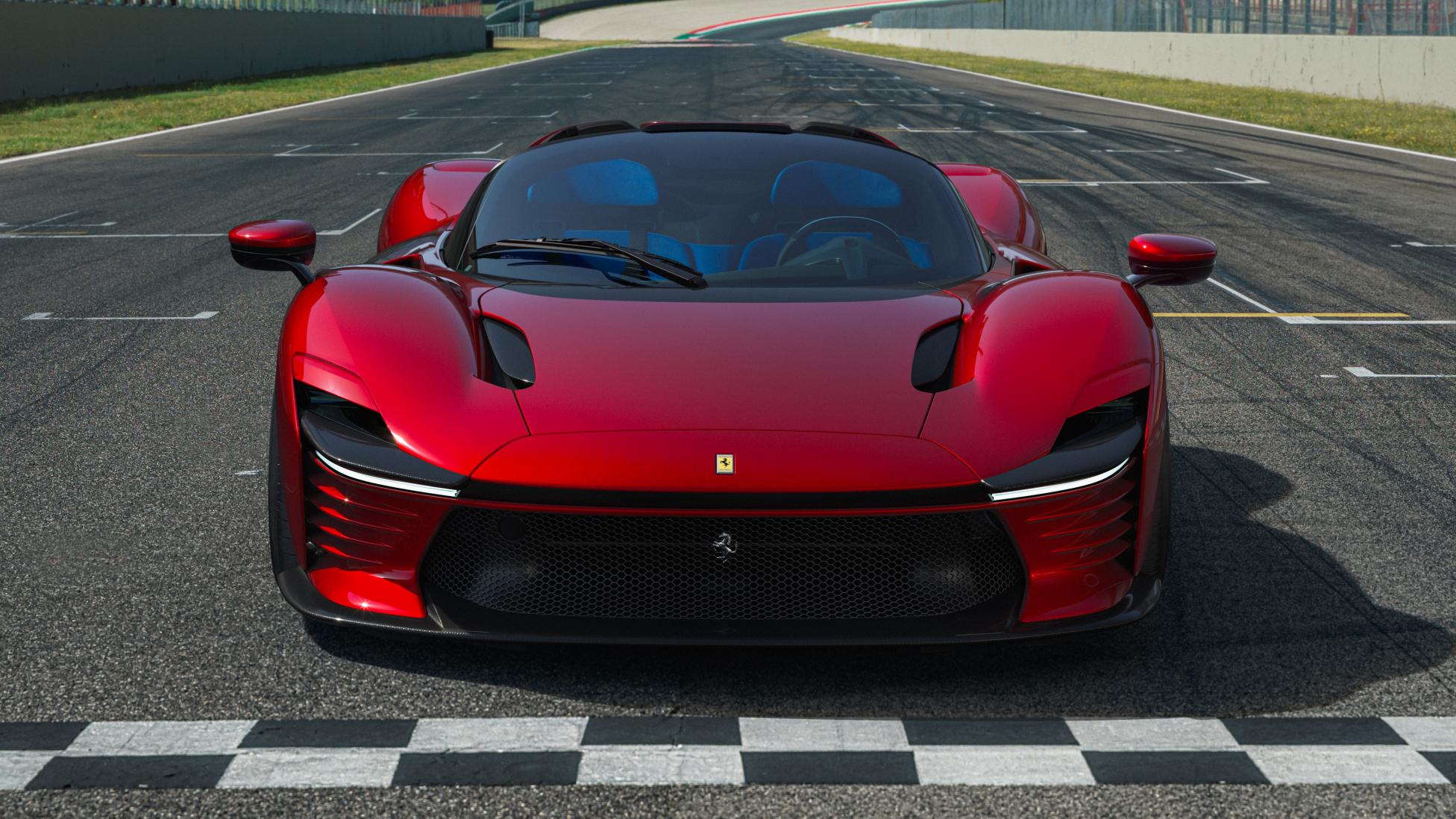 It’s difficult to dispute. The cues are all there but magnificently mashed up. Look at it head-on and the cresting front wings are straight out of the classic endurance racing playbook (think also Ferrari 512 S and 712 Can-Am), and flow into a pair of functional bonnet air vents. The headlights follow Ferrari’s current slimline LED path but have ‘eyelids’ that retract in a manner that calls to mind pop-up headlamps. The door mirrors have been repositioned to the top of the wings, another nod to the great endurance racers. And check out the ‘cab-forward’ stance and the way the windscreen wraps around the cockpit, an impression heightened when the detachable roof panel is in pace. It’s all deeply evocative.

Then there are the ‘butterfly’ doors, which feature an integrated air box that delivers air to the side-mounted radiators. There’s a beautifully pinched waist, and an organic softness to some of the forms is matched by a pronounced edginess elsewhere. The rear might be the wildest part of all, composed of a series of horizontal blades that underscore the SP3’s futuristic character while betraying the influence of a more obscure reference point: Pininfarina’s 1968 Ferrari 250 P5 concept car (look it up). The taillights are set into a horizontal light bar beneath the spoiler; the tail pipes exit through the upper part of the diffuser. This is car as abstract art.

As ever, make up your own mind, but be in no doubt: the Daytona SP3 is a stunning looking machine in the flesh, a car that turns up the volume on the visual entertainment depending on where you stand (literally). “You can take cues from the past but it’s vital that you don’t lose the visionary approach,” Manzoni continues. “You can see how it’s possible to connect the beauty of our heritage with our vision for the future. We would never do a ‘restomod,’ it’s low-level. Never make something that is banal or obvious.” 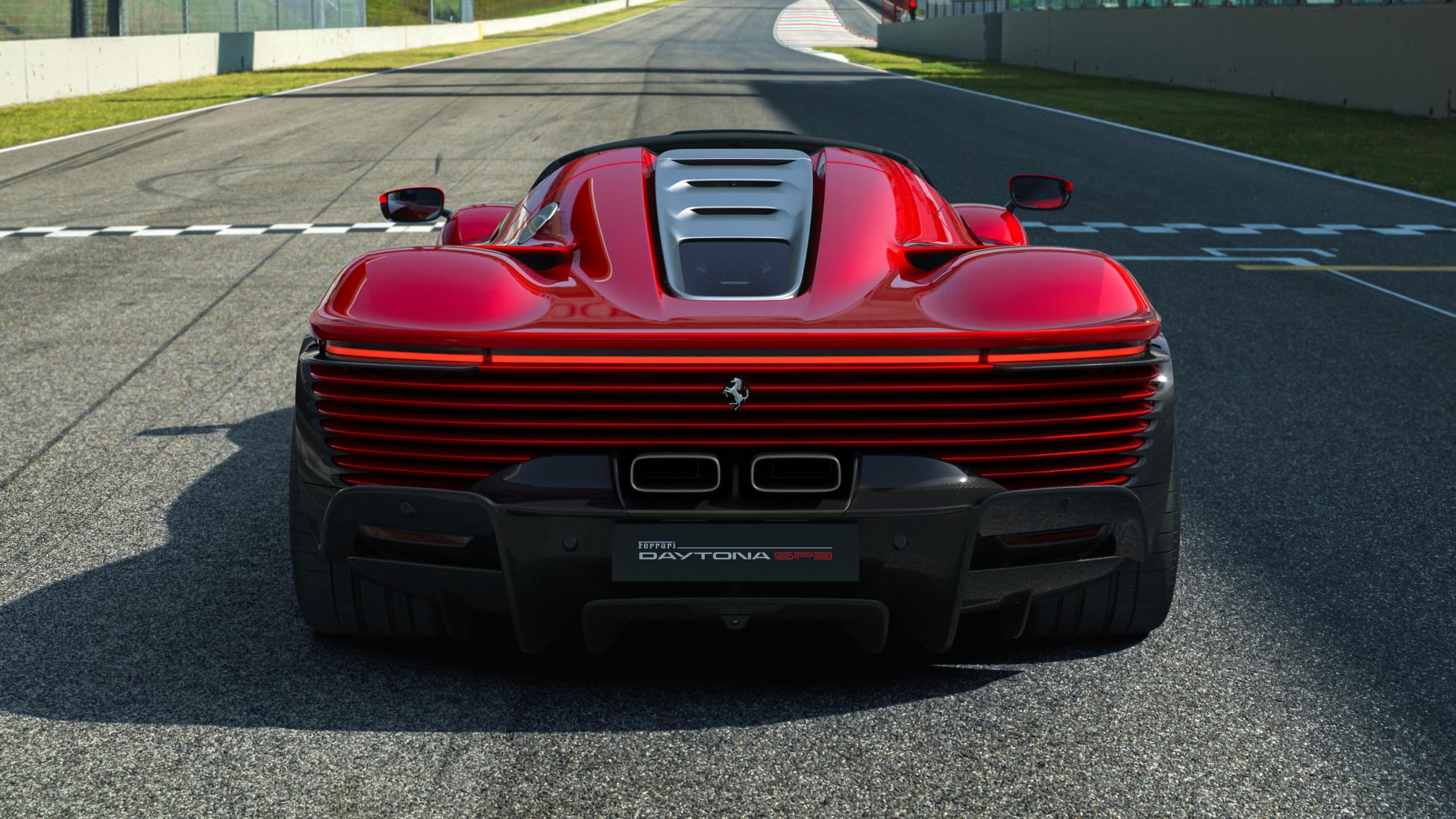 Technically, the Daytona SP3 is also intriguing. The helicopter pitch is a more analog, non-hybrid LaFerrari, although Galliera is quick to dispute this when I put it to him. “This is emphatically not a LaFerrari Speciale. When we do a new hypercar it’s the pinnacle of performance, exploring a new technology frontier,” he insists. “Icona is more design-driven, and we have some collectors who are very focused on that aspect of Ferrari. Although some elements are shared with the LaFerrari, the philosophy and strategy are completely different.”

Understood. But while the Daytona SP3 effectively remixes some existing componentry, it’s still sharp as a blade. The chassis and body shell are made from carbon-fiber composites, much of it derived from aeronautics and Formula 1, including T800 carbon-fiber for the tub and T1000 for the doors and sills. This is as good as it gets. In fact, it’s so strong, it’s the stuff the nuclear industry relies on to make the centrifuges in which they enrich plutonium. 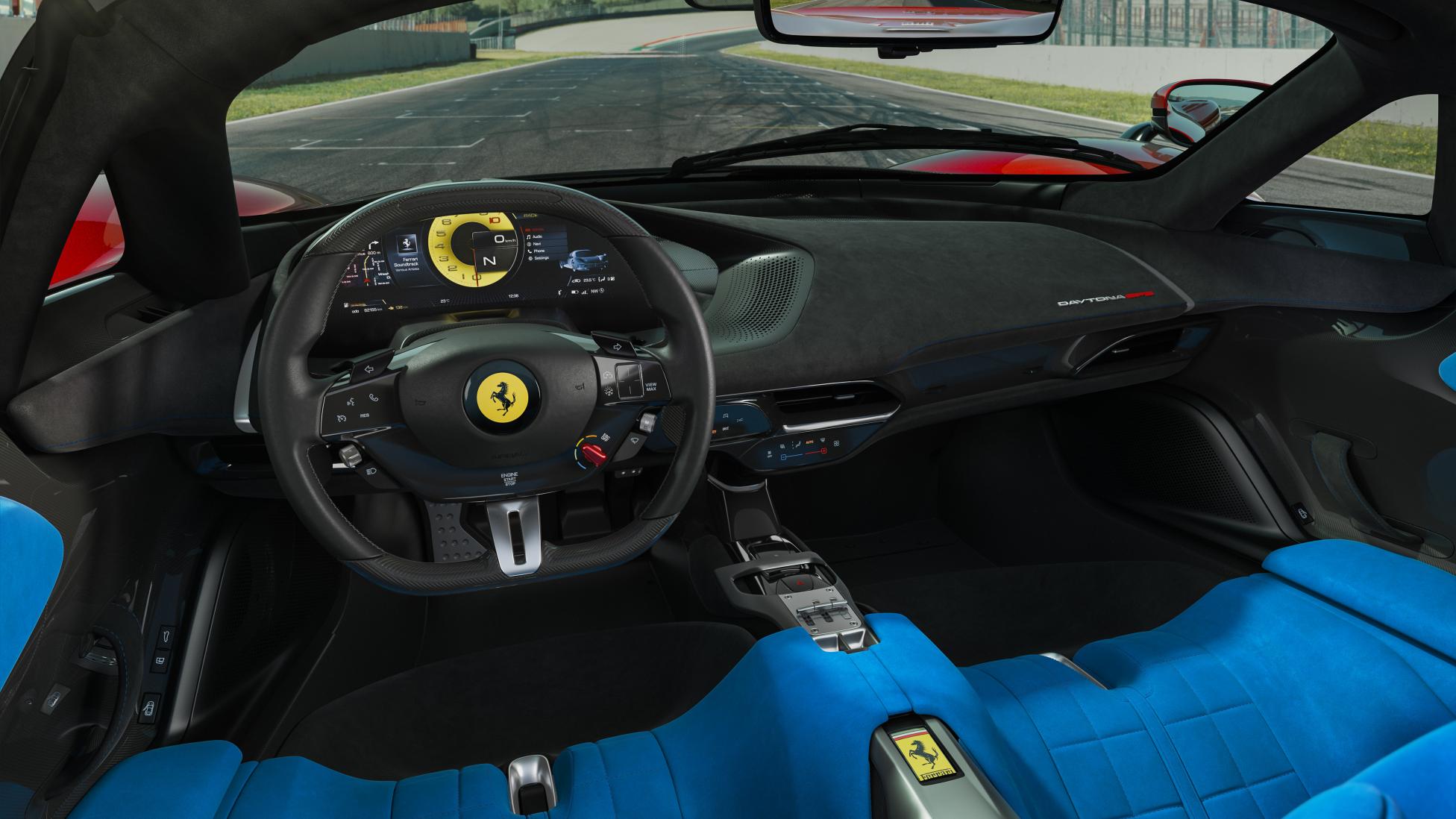 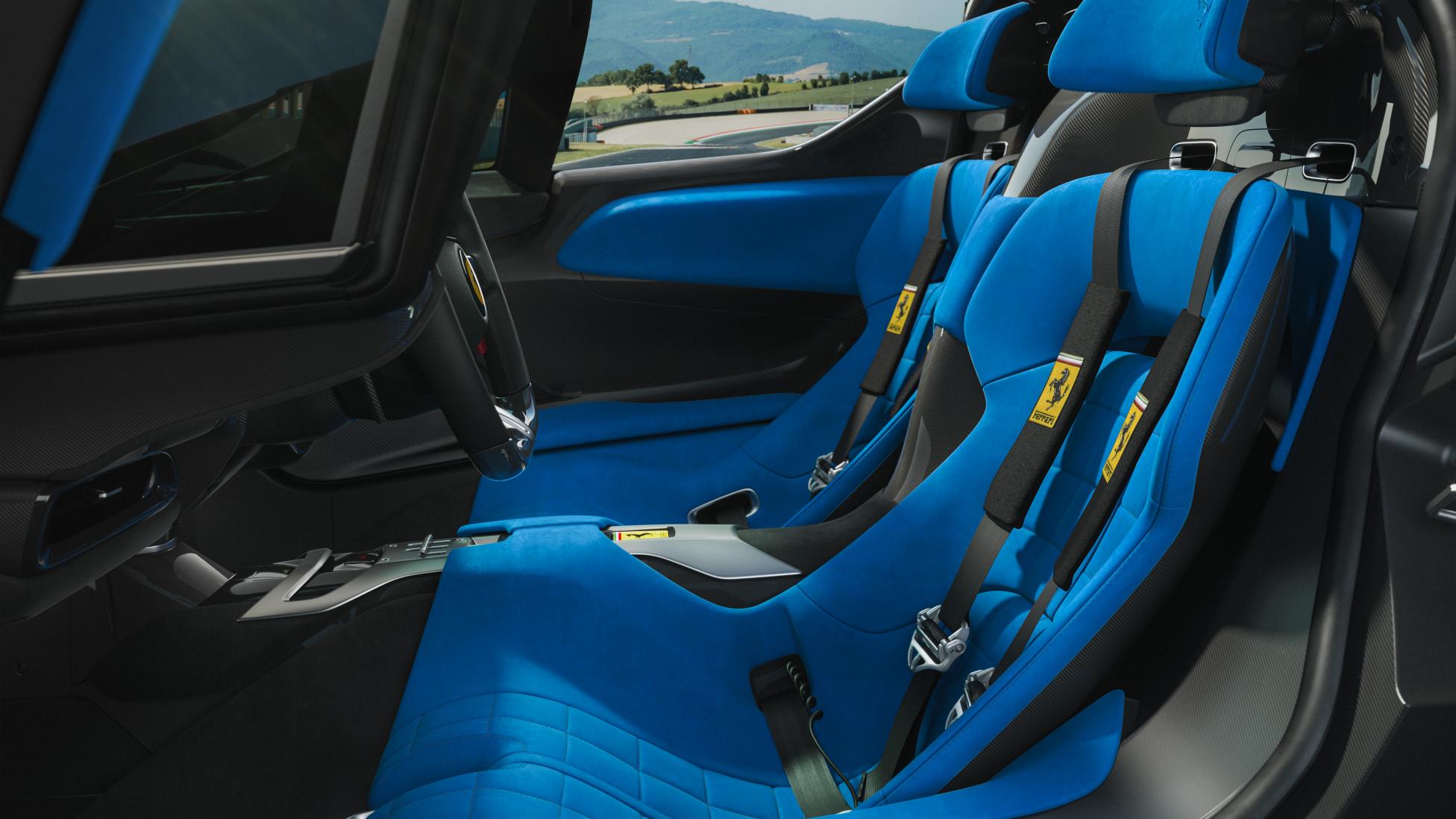 Note also that the seats are integrated into the chassis, as was the case on the LaFerrari, reducing weight, optimizing the driving position, and promoting more of a single-seater feel inside. It feels very racy indeed. The HMI is the latest Ferrari system; the main instrument display sits in a pod that seems to float above the carbon-fiber main structure. We’d go so far as to say this is the best Ferrari interior yet—focused, reduced, and emotive.

The new car also looks the way it does because of our old friend aerodynamics. Ferrari says the Daytona SP3 has the highest level of passive aero efficiency it’s ever achieved, so Centro Stile didn’t have to worry quite so much about incorporating appendages or wings.

But it’s still a world-class piece of aero-driven sculpture: there are flicks and ducts at the front, the waisted mid-section is reminiscent of the barge boards on an F1 car, there are underbody vortex generators, and floor chimneys that optimize the airflow under the rear of the car. These were only structurally possible because the SP3 has shed the LaFerrari’s hybrid components. Chief technical officer Michael Leiters says that the biggest challenge is in delivering aerodynamic harmony across the whole car. The Daytona SP3 generates 230kg of downforce at 200kph, and has a dry weight of 1,485kg. 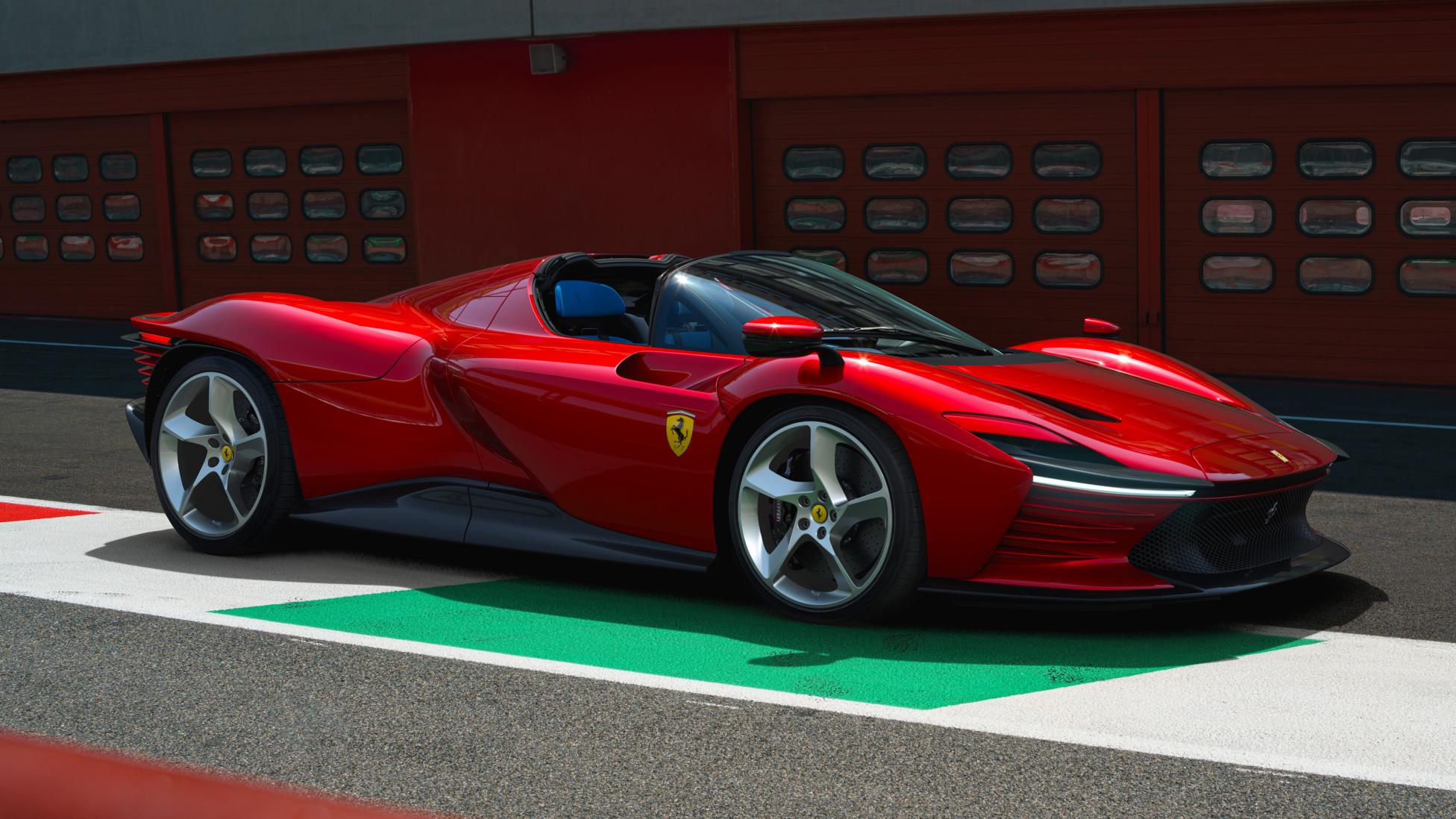 Finally, the engine, which is the magnificent 6.5-liter V12 as seen most recently in the 812 Competizione. It makes even more power here—829hp—and it can rev to a skyscraping 9,500rpm. The pistons have been redesigned, there are lighter titanium con-rods, a material called DLC (diamond-like carbon) has been applied to the piston pins to reduce friction, and the crankshaft has been rebalanced and is 3% lighter.

Sliding steel-finger followers on its valve springs improve gas flow and combustion, a technique used on the most powerful superbikes that’s partly responsible for their razor-sharp throttle response. There are also variable geometry inlet tracts on the intake to maximize the might of the explosions going on in the combustion chamber. The SP3 uses the latest 6.1 version of Ferrari’s remarkable SSC software, incorporating the Ferrari Dynamic Enhancer for the first time on a mid-engined car to trim the yaw angle and sharpen cornering agility even further. Top speed is in excess of 340kph, 0-100kph done in 2.85sec, 200kph in 7.4sec.

“We could have made it faster,” Leiters tells Top Gear. “But that wasn’t the aim. It was challenging getting to 830hp, and there were lots of issues around thermal management. But the Icona project brings with it a certain degree of mental freedom and the lower volumes allow us to do some interesting things. There is carbon around the rear of the car, for example, that comes from F1 and can cope with even higher temperatures.”

It’s slightly comical to think that the Daytona SP3 is Ferrari in more relaxed, reflective mode. Design-driven it may be, but you wouldn’t bet against this being the most dynamically satisfying Ferrari of the lot. 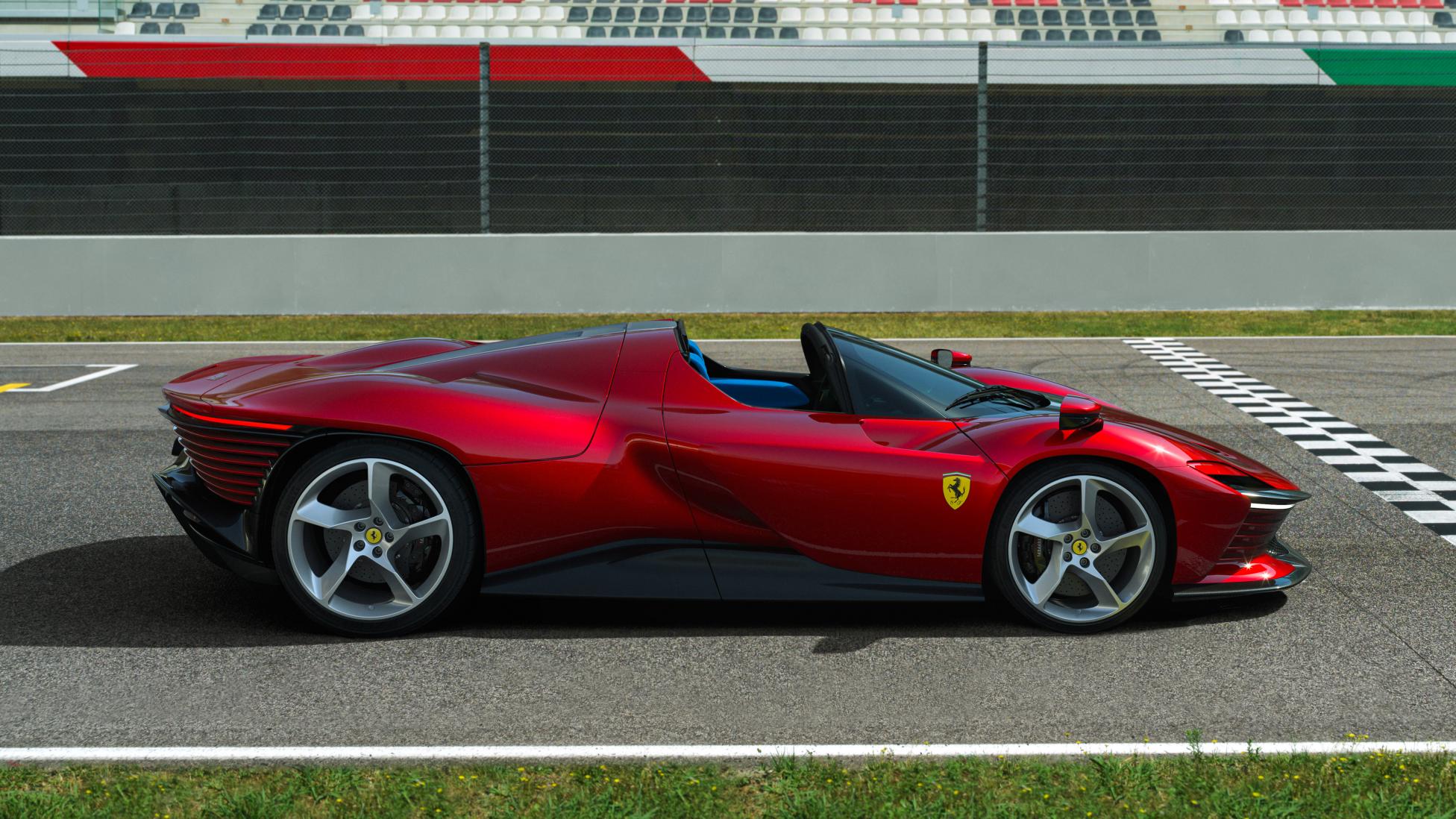 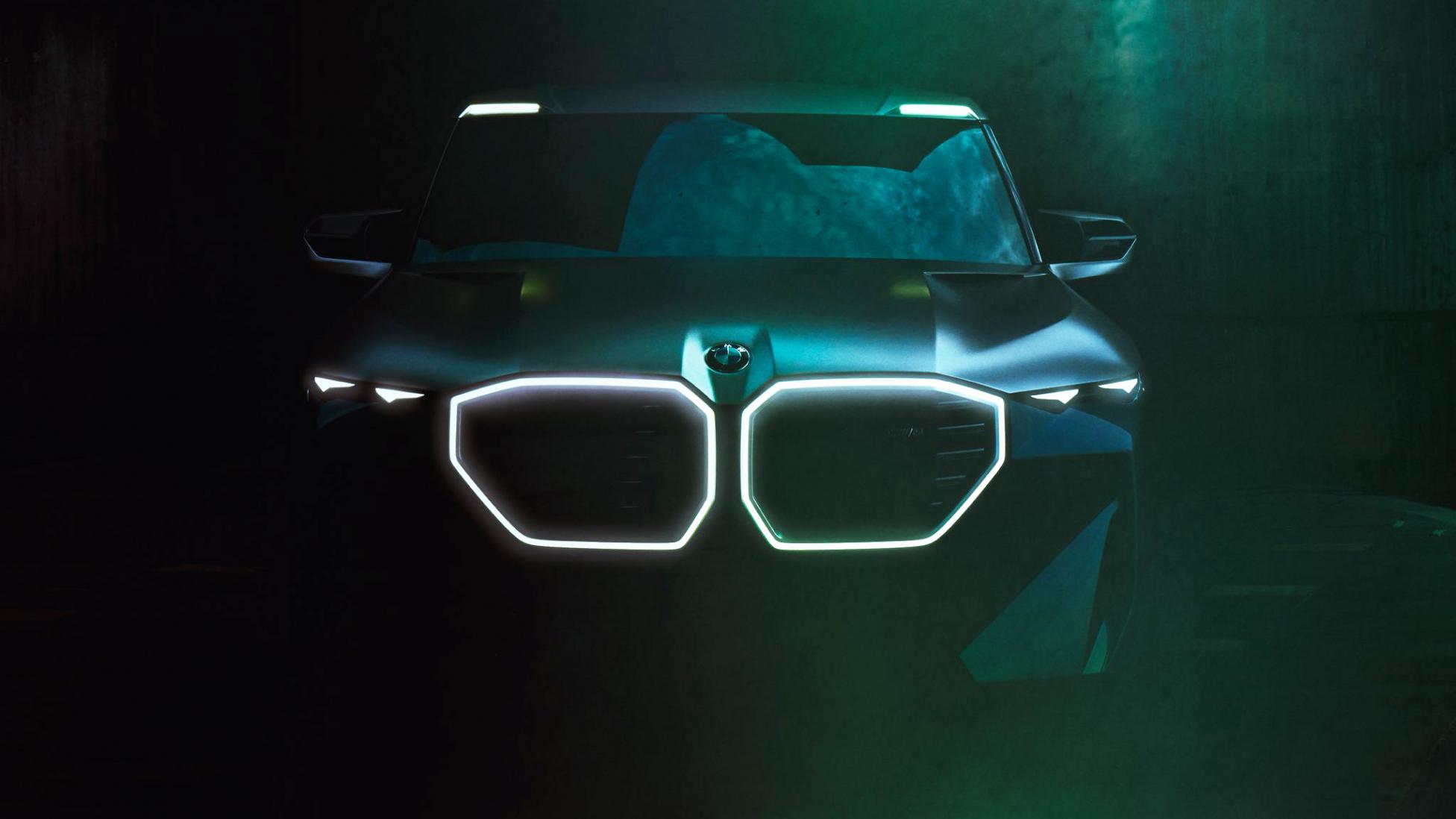 These high-performance nostrils are from BMW M’s next EV
View other articles about:
Read the Story →
This article originally appeared on Topgear.com. Minor edits have been made by the TopGear.com.ph editors.
Share:
Retake this Poll
Quiz Results
Share:
Take this Quiz Again
TGP Rating:
/20