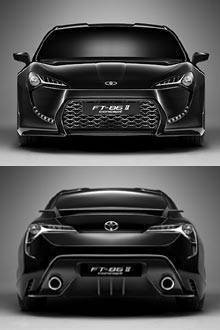 Toyota Motor clues the world in on its future sports car with the new FT-86 II Concept, which was unveiled at the 81st Geneva International Motor Show.

The Japanese carmaker showed off what it says is the "strongest indication yet" of the sports car it is developing with Subaru, which is scheduled to be launched in 2012.

The concept car, which was voted by our readers as the most exciting vehicle in this year's Geneva lineup, was designed to pay homage to Toyota's sports car history with its long and low hood, high wings and rear-set cabin.

"The low, highly aerodynamic bodyshell is stretched tight over the engineering hard points, with muscular bodywork rendered as compact as possible," Toyota said in a statement. "The concept measures 4,235mm long, 1,795mm wide and 1,270mm high, with a long 2,570mm wheelbase."

Under the hood, the Toyota FT-86 II carries a free-revving boxer petrol engine plus a compact and lightweight six-speed manual transmission. It is also given a low center of gravity to ensure that it gets the best possible power-to-weight ratio.

"Both the powertrain and the driving position have been set as low and as far back as possible to optimise balance for maximum poise, high-speed stability and agility," Toyota said. "With a front-engine/rear-wheel drive configuration, this gives the car lively, accessible performance that is easy to harness and enjoy."

So it's quite a looker and it promises an impressive performance. But what other kickass features would you like to see when this hits the production line?

Geneva Motor Show: Bold step for Mazda with Minagi concept
View other articles about:
Read the Story →
This article originally appeared on Topgear.com. Minor edits have been made by the TopGear.com.ph editors.
Share:
Retake this Poll
Quiz Results
Share:
Take this Quiz Again
TGP Rating:
/20