Among small crossover SUVs, which ones have best and worst headlights?

Let's face it: When we're buying a car, the headlights are probably the least of our concerns. And even when we do throw these car parts some attention, it's usually for their stylish shape and not for their effectiveness. Which shouldn't be the case because proper illumination during nighttime driving could spell the difference between arriving in one piece and never making it to your destination at all.

As it turns out, even carmakers--particularly those who manufacture SUVs--aren't paying close enough attention to headlights, according to the latest evaluations of the Insurance Institute for Highway Safety in the US. These evaluations featured 21 small SUVs, which included compact and subcompact models.

According to the group's press statement, "not a single small SUV out of 21 tested earns a good rating, and only four are available with acceptable-rated headlights."

Imagine that. Of the small SUVs available in the US market--many of which are also sold in the Philippines--not one is equipped with a good pair of headlamps (read: those that provide excellent lighting ahead of the vehicle when you're driving at night).

"The issue merits attention because about half of traffic deaths occur either in the dark or around dawn or dusk," IIHS pointed out.

Crucially, as the group observed, "more modern lighting types--including HID and LED lamps, and curve-adaptive systems that swivel in the direction of steering--are no guarantee of good performance."

The evaluations used "a special device that measured how far the light was projected as the vehicle was driven on five approaches: traveling straight, a sharp left curve, a sharp right curve, a gradual left curve, and a gradual right curve. Glare from low beams for oncoming drivers is also measured in each scenario."

So yes, it's not enough that your headlights are bright for your usage. If they blind or dazzle drivers in the opposite lane, then they're unsafe just the same.

Anyway, here are the results of the IIHS evaluations: 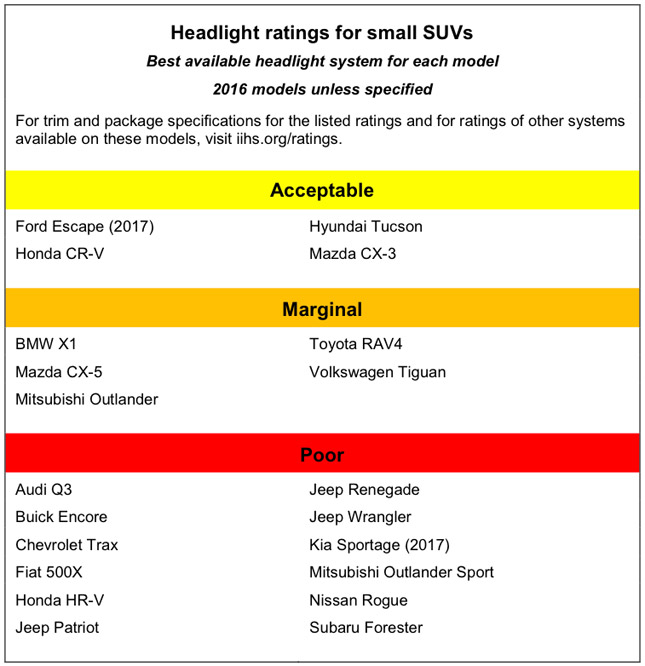 "The best-performing headlights in the small SUV group belong to a new model, the Mazda CX-3," declared IIHS. "They are curve-adaptive LED lights with optional high-beam assist. The low beams perform well on both right curves and fairly well on the straightaway and sharp left curve; however, they provide inadequate light on the gradual left curve. The high beams perform well on most approaches."

Even so, it is worth repeating that the best headlights in these tests are good only for an "acceptable" rating. Three other models got this rating, all of which are available in our market: Ford Escape, Honda CR-V and Hyundai Tucson.

The CX-3's bigger sibling, the CX-5, fared worse with a "marginal" rating, along with the BMW X1, the Mitsubishi Outlander, the Toyota RAV4 and the Volkswagen Tiguan.

Failing to dodge the dreaded "poor" rating were the Audi Q3, the Buick Encore, the Chevrolet Trax, the Fiat 500X, the Honda HR-V, the Jeep Patriot, the Jeep Renegade, the Jeep Wrangler, the Kia Sportage, the Mitsubishi Outlander Sport (aka ASX), the Nissan Rogue and the Subaru Forester.

The biggest loser was the HR-V. "The worst headlights among the small SUVs belong to the new-for-2016 HR-V," said IIHS. "The illumination provided by the HR-V’s halogen low beams and high beams is inadequate on all four curves and on the straightaway.

So, the CX-3 has the best headlights in this batch, while the HR-V has the worst. How much better, then, are the CX-3's headlights compared with the HR-V's? Here, have a look... 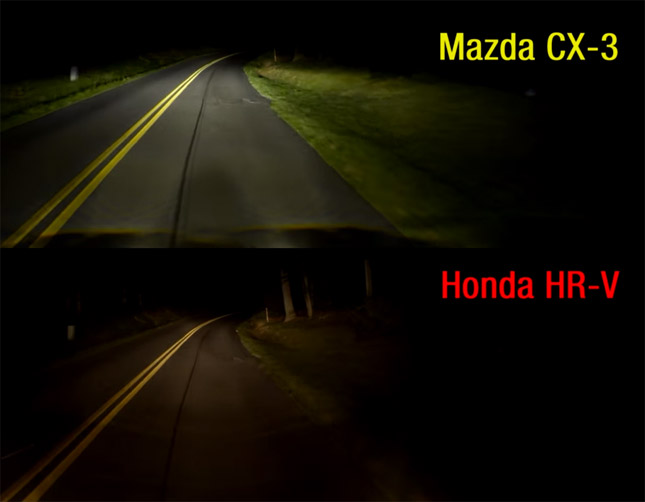 Now, we don't know with 100% certainty if the Philippine-market models have same-spec headlights as their US-market counterparts, but the results of these evaluations should offer us a fairly clear idea about which carmakers have at least managed to equip their small crossover SUVs with decent headlights, and which ones have failed to do so. The results may not greatly impact your next car-buying decision, but it's nice that such information is available.

May your path at night be ever clear and bright. Drive safely. 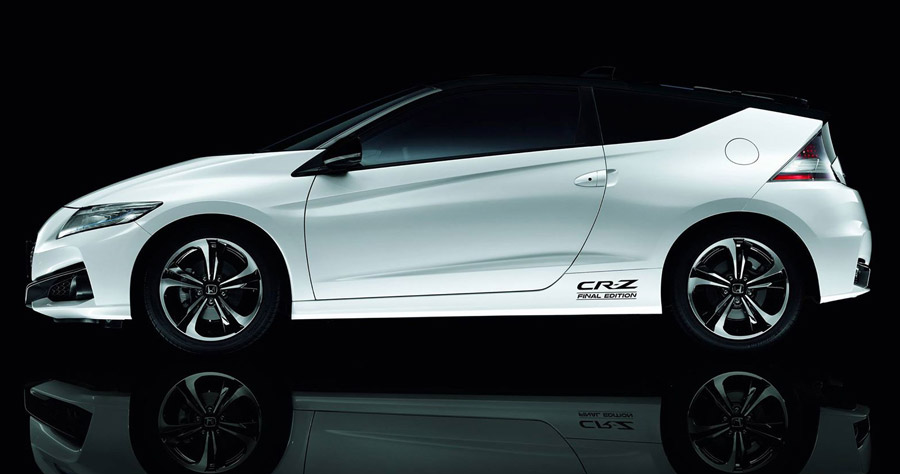 Honda PH releases CR-Z Final Edition; won't confirm if model is on its way out
View other articles about:
Recommended Videos
Read the Story →
This article originally appeared on Topgear.com. Minor edits have been made by the TopGear.com.ph editors.
Share:
Retake this Poll
Quiz Results
Share:
Take this Quiz Again
TGP Rating:
/20