Mazda and Ford bested eight other car brands in the Philippines in offering the most satisfying customer service to new-car owners.

Mazda, which is under Ford Group Philippines, is closely followed by the Ford brand, which scored 828 (see the complete list of the brands involved in the survey below). Ford Group is the sixth biggest car brand in the Philippines in terms of sales. A total of 4,562 Ford and Mazda units were sold in the first half of the year, 35 percent higher than the group’s sales in the same period last year.

Mitsubishi, the second biggest brand in the Philippine market with first-half sales reaching 15,653 units, ranked third in the survey with 823 points. It was followed by Nissan with 822 points and Toyota with 821 points. 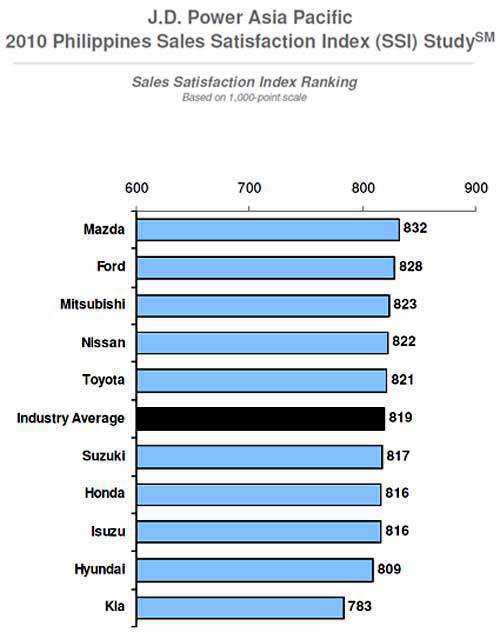 The J. D. Power Asia Pacific SSI Study involved 1,400 new-car owners who bought their vehicle between August 2009 and February 2010. The study was conducted from February to May.