You probably haven’t heard a few of these
by Craig Jamieson | Aug 16, 2021
CAR BRANDS IN THIS ARTICLE

The fact that the Land Cruiser has made it to 70 years old is perhaps the least surprising news in the car industry. This is the Land Cruiser, after all, a machine born to overcome, outlast, and whatever else they bang on about at the start of Survivor.

And a survivor is exactly what the Land Cruiser is. The Cruiser is the hero that doesn’t win because they’re superpowered, or due to some Deus ex Machina (the plot device, not the motorbike company), but because they’re relentless. They never, ever give up, regardless of how many or how immense the obstacles are. Malcolm Reynolds in Serenity. John McClane in Die Hard. Wall-E in Wall-E. 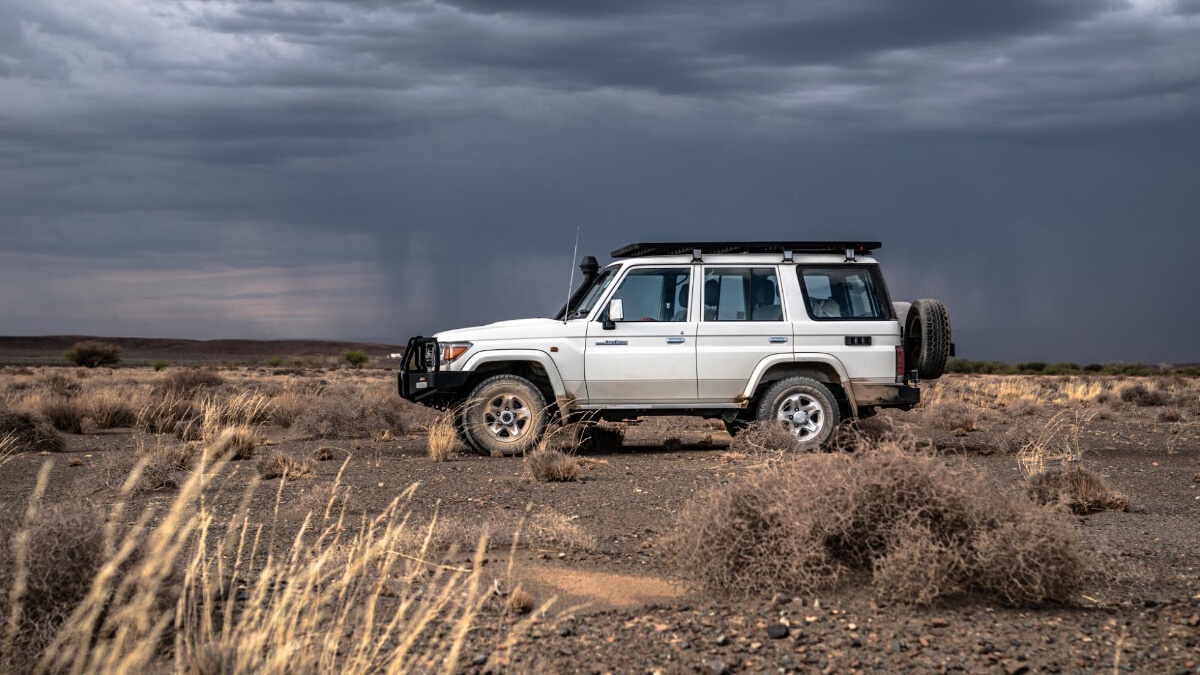 For such venerable service in the face of sometimes absurdly arduous challenges, we feel the Land Cruiser has earned a few words in honor of its momentous birthday. And it wouldn’t be a birthday speech for a septuagenarian without a bit of a look back at its history...

1) It was originally called a Jeep. 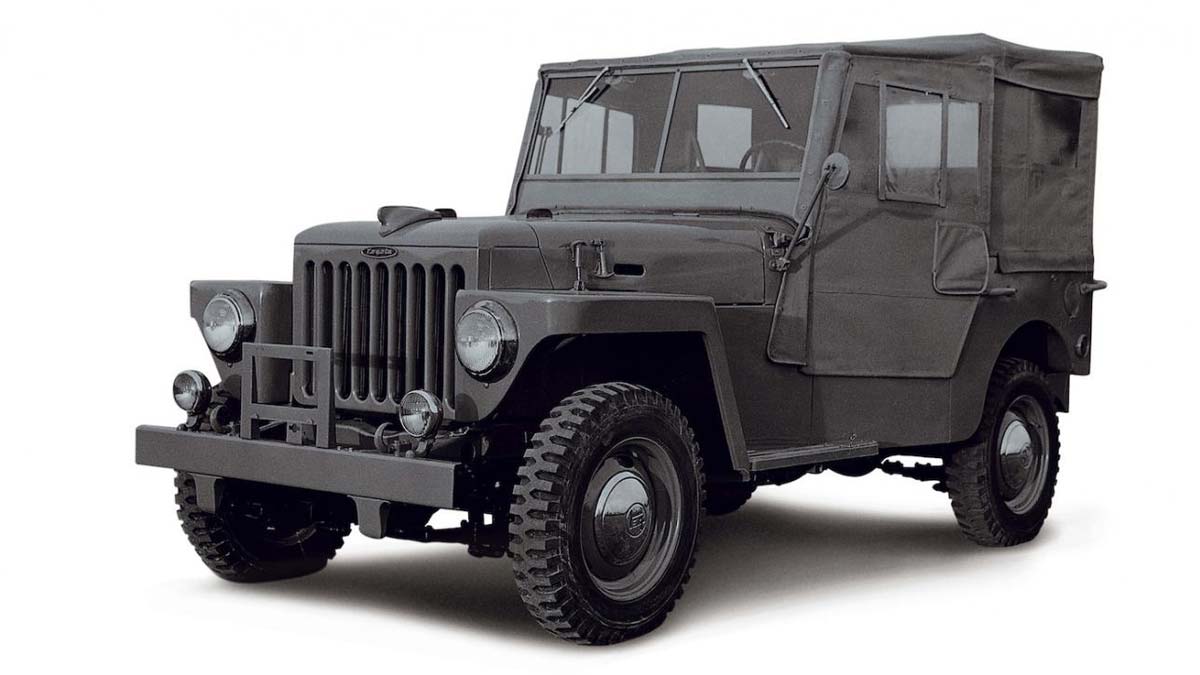 After the Americans put a particularly severe end to Imperial Japan, almost a million Yanks found themselves stationed on one of the islands of Nihon. Then, in the early ’50s, America had a whole new war (or police action, if you’re a fan of government nomenclature/propaganda) to fight over in Korea. And for that, they’d need wheels.

Just like the Willys/Ford/Bantam Jeeps of World War II, the Americans decided to keep things simple and use Japanese-built versions of the basic Jeep design, placing an order for 100 Japanese Jeeps with Toyota. Aside from being a bit more powerful and a bit bigger, the Jeep BJ was broadly similar to the original Willys Jeep, and served in the Korean War. Local authorities saw the potential in the simple, off-road-ready machine and placed orders of their own, kicking off proper production of the Toyota Jeep.

Funnily enough, Willys had a few misgivings about... well, giving away a name with as much clout and cred as Jeep, considering how instrumental the American company was in creating a machine worthy of both. So Toyota changed the name to the Toyota BJ at first, and then—to the chagrin of double-entendre fans everywhere—changed it again to Toyota Land Cruiser. And yeah, Toyota knew what it was doing, throwing down the gauntlet to that other world-famous off-roader. No, not Jeep, the other other one. Yeah, Land Rover.

2) Americans don’t seem to get the Land Cruiser. 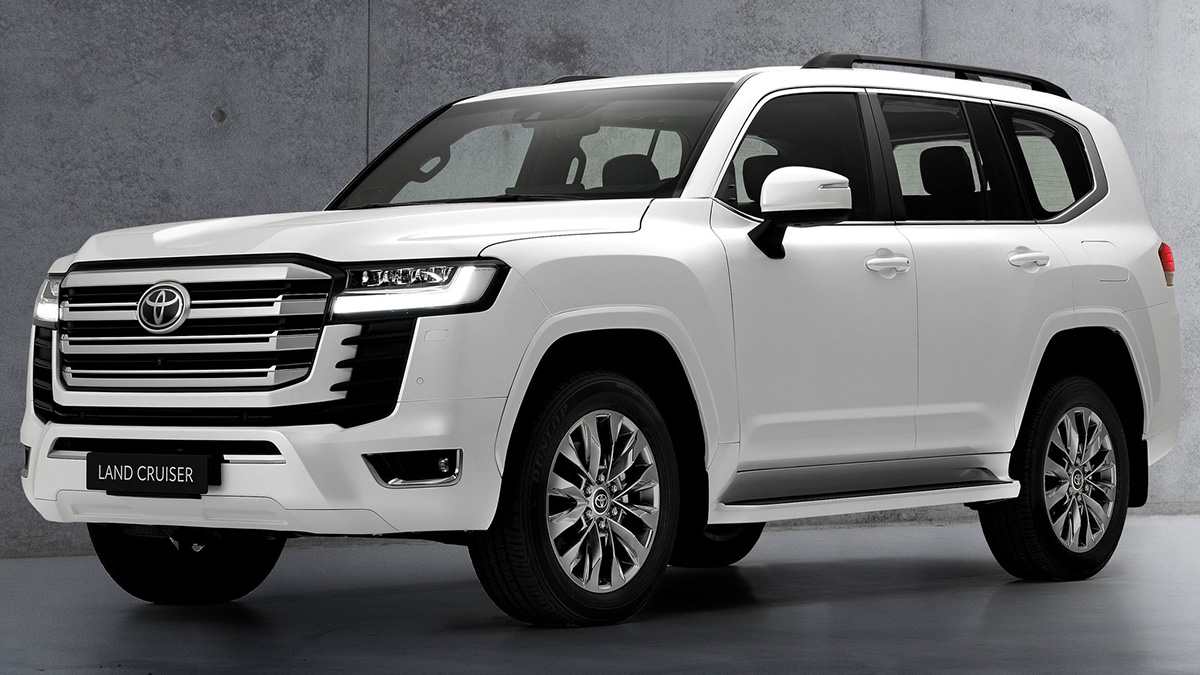 English-speaking countries like Australia and South Africa get what the Land Cruiser'’s about, regardless of the strength of their accents. So they’re used by farmers, miners, and anyone with a pressing need to get somewhere remote and then continue living. But then there’s America.

The Cruiser got off to a... conservative start in the US of A, reportedly selling just one in its first year on sale. And after years of slugging it out despite sluggish sales, it’s now gone from American climes in its entirety, while American-specific Toyota off-roaders soldier on. Off-roaders like the Toyota Sequoia, for instance, which is nothing if not truth in advertising, being roughly the size of a California redwood.

But in a small way, the Land Cruiser lives on in the land of the free: the Yank-spec 4Runner runs on Land Cruiser Prado underpinnings.

3) Australians REALLY get the Land Cruiser. 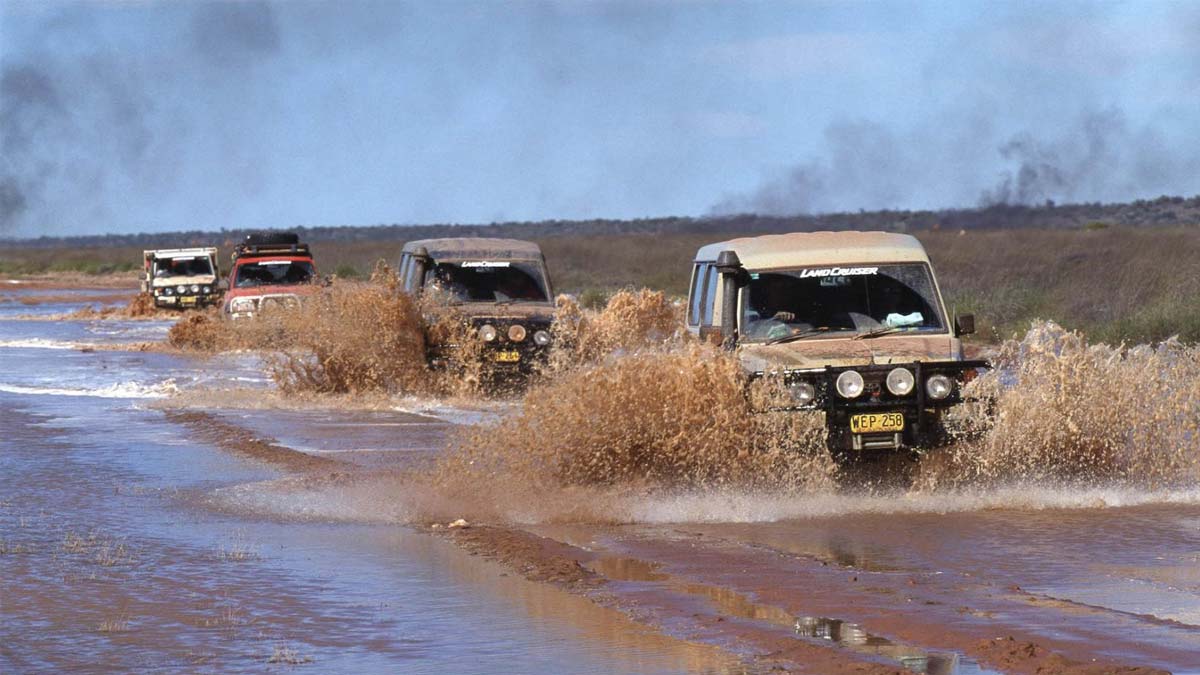 Despite Australians making up just 0.33% of the world’s population (and yet seeming to tend bar at every pub in London), our Antipodean cousins have bought more than 10% of all the Land Cruisers ever made.

This might have something to do with the fact that Australia tends to be a touch on the inhospitable side once you leave the cities. And, if you find yourself somewhere like Fortitude Valley, for instance, the city can feel inhospitable enough to brave the elements.

And while any number of vehicles will get you somewhere with Australian levels of antipathy to your continued existence, as the old saying goes, only a few will get you back again.

4) The family tree is a bit more convoluted than you might think. 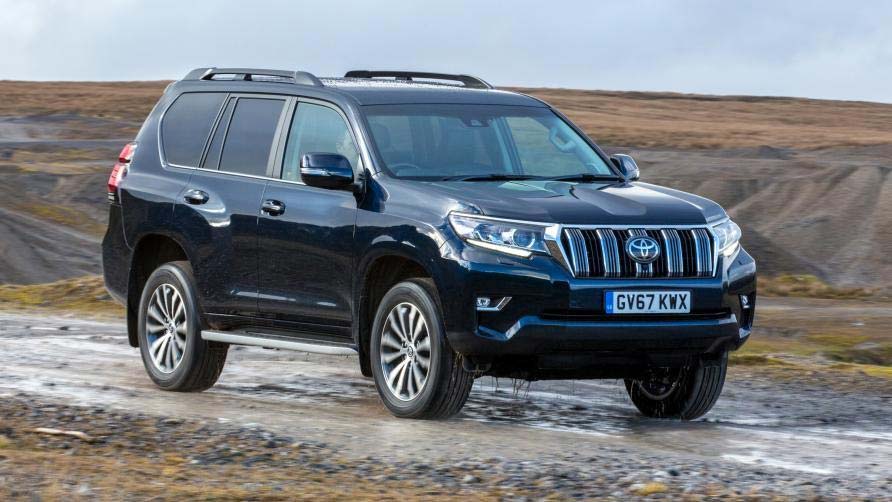 Remember when we said the Land Cruiser Prado underpins the 4Runner? No? Well, were you actually paying attention at all? Yeesh.

The original Land Cruiser was as tough and uncompromising as the terrain it sought to conquer. So that’s everything from the original BJ (quiet down, children) to the 20, 40, and 70 Series Land Cruisers, the latter continuing on doing what the Land Cruiser’s always done.

Then, in 1967, Toyota helped pioneer the SUV with its FJ55 off-road wagon: a gentler, better-mannered off-roader that traded away precious little off-road ability for a massive measure of family friendliness. As with the Jeep Wagoneer and Range Rover, Toyota made its pioneering SUV more luxurious with the 60 Series in 1980 (i.e. the one from Dante’s Peak) and the 80 Series in 1989 (i.e. the one everyone had). Then came the supermassive, super-luxe 100 and 200 Series, and so on.

But then there’s the Prado. It started off in the ’80s as a kind of light-duty Land Cruiser, a 70 Series that’d do everything 99% of us could ever need. But it wasn’t called the Prado at that point. It was, in some markets, called the Bundera. Which... sure.

Anywho, the light-duty Land Cruiser powered on until the ’90s, when it finally scored the Prado name—or ‘Land Cruiser Colorado’ in Blighty—and continues on being called the Prado, or Land Cruiser LC3, LC4 or LC5, which... okay, will someone just pick a name and stick to it?

Right, that finishes the lesson. Now, we need to talk to a few of you after class. 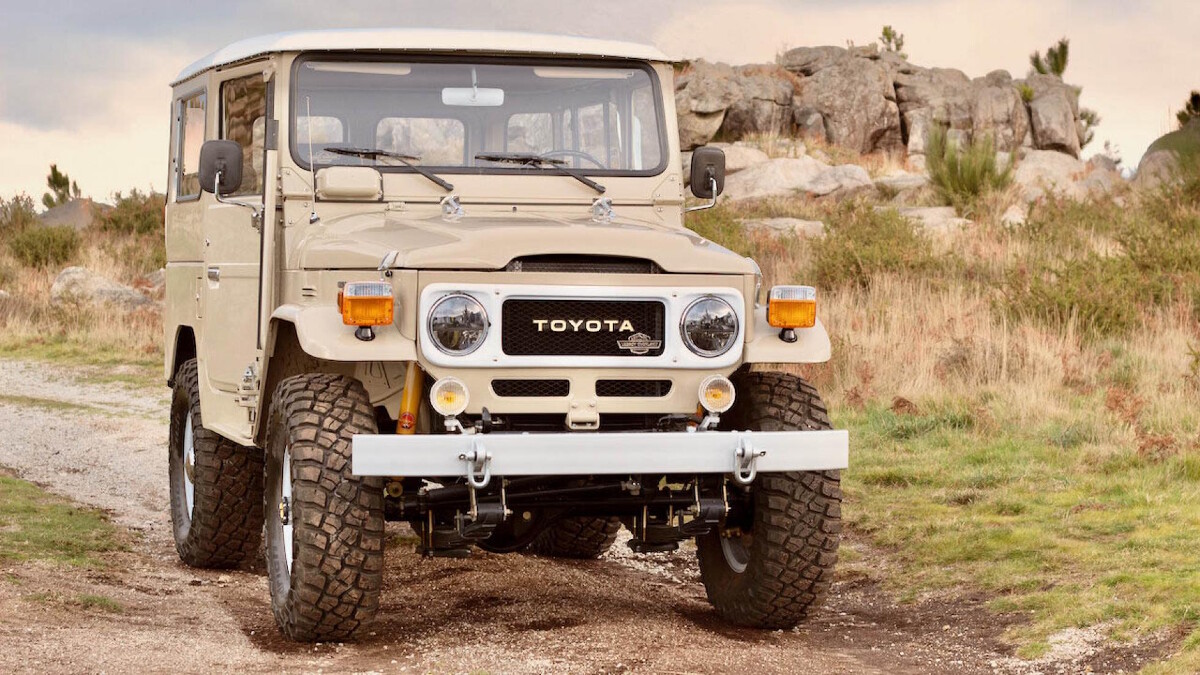 The FJ40 is already lionized for its ability to outlast just about anything, with a longevity perhaps better measured in generations than years, as in ‘My grandad and dad had this one, so it’ll probably last for me and my son before it needs a refresh.’

But now, it’s one step closer to actual immortality. Okay, sure, it’s immortality with a serious Ship of Theseus clause, but it’s immortality nonetheless. With Toyota now making new replacement parts for the venerable FJ40, we can reasonably expect to shift how we measure its longevity from generations to eons. 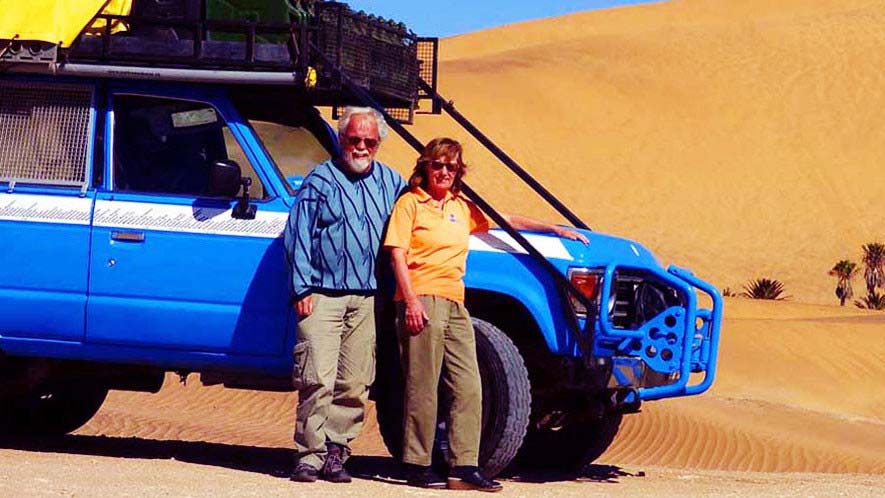 Of course, it’s the Land Cruiser that set a world record for the longest driven journey. Technically-still-Swiss nomads Emil and Liliana Schmid set off for a bit of a road trip in 1984 and racked up more than 740,000km over the next three and a bit decades, in the same Land Cruiser 60 Series, visiting more than 180 countries in the process. Look on their works, ye #vanlife Instagrammers, and despair!

Also, as a really crap coda to this story, coronavirus, travel restrictions and a binder full of bureaucracy meant that the Schmids had to leave their Land Cruiser just outside of Buenos Aires in 2020. After trying to clear a series of legal hurdles to be reunited with the vehicle that’s been their home from home for more than three decades, it’s still trapped in red tape in Argentina, perhaps forever.

7) The Land Cruiser tried its hand at Dakar, with predictable results. 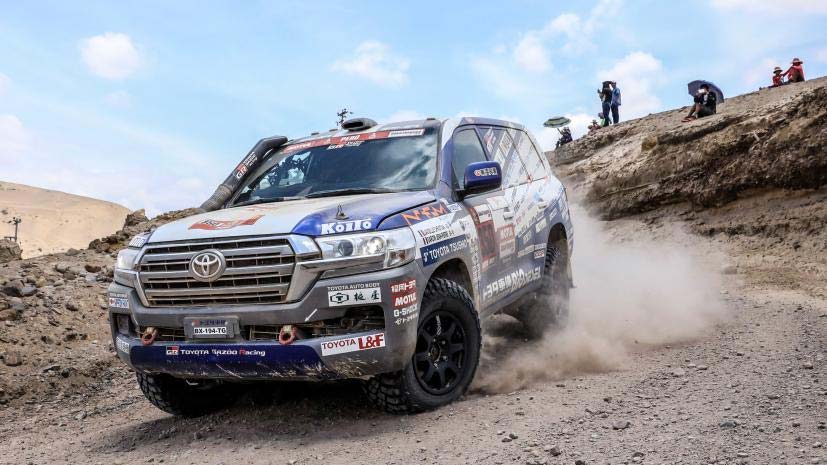 If you’re a casual Dakar fan, you might a) wonder how long we can legitimately keep calling it Dakar, now that it’s moved to South America and then Saudi Arabia, and b) already know all about the Toyota Hilux Dakar, winner of the 2019 event.

But you might not know that Toyota fields a much more basic entry in the race that we’re almost contractually obligated to refer to as ‘grueling.’ And it, as you’ve likely already guessed, is a basically unmodified Land Cruiser. Sure, it takes a spell longer than the front-runners, but it continually takes honors in whichever class it’s entered into. Of course, that might be down to Land Cruisers tending to make up between a quarter and 100% of the grid on any given year, but still—roughly standard Land Cruisers are taking on perhaps the roughest rally raid known to man and thriving.

8) It’s also held records for reasons you might not expect. 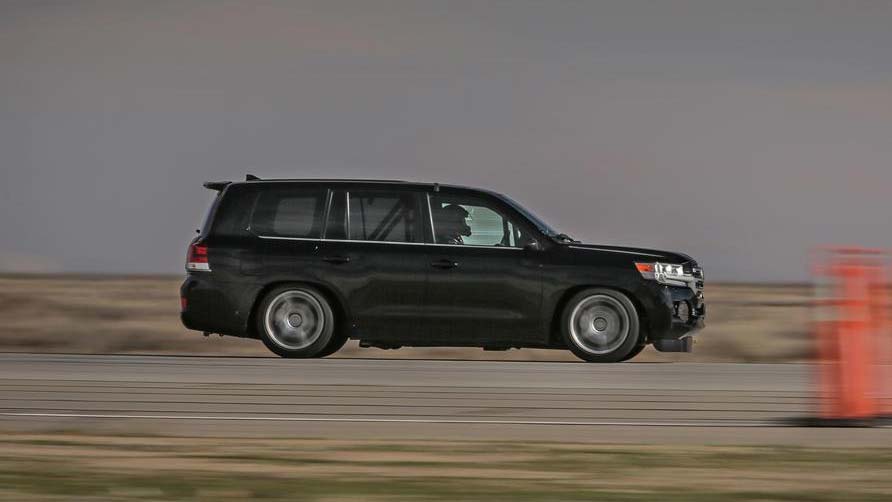 World’s fastest SUV. Kind of like ‘world’s wettest desert’, or ‘world’s most serious comedy’. But still, because we seem to be driven to find the zenith of even the most pointless endeavours, it is something grown men dedicate themselves to achieving.

And it’s a record held until recently by a 2,000hp, 370kph Land Cruiser, dubbed the Land Speed Cruiser. And that’s the kind of wordplay you just don’t get in serious, useful pursuits.

Apparently, there’s a 2,000hp Qashqai that’s gone a few kilometers an hour faster, but it’s actually a Nissan GT-R with a Qashqai body on top. And does that really count?

9) One was deemed ugly enough to be dubbed the ‘Iron Pig.’ 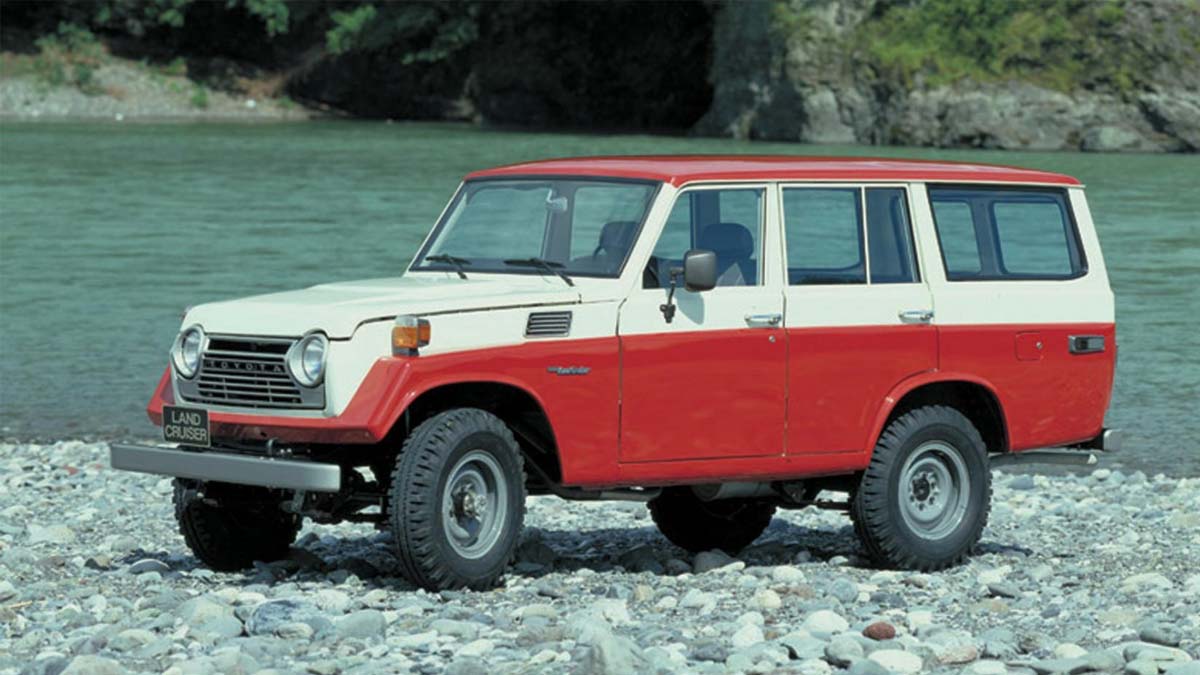 The 55 Series is perhaps not the most desirable object in the entire physical realm, sure, but Iron Pig seems a touch on the extreme side. They weren’t to know that the FJ55 and its ilk would usher in an era where oversized and overwrought SUVs dominated the landscape, pushing the standard saloon and station wagon to the fringes of the market. So the epithet is hardly down to the FJ55’s intent.

Instead, it’s purely an aesthetic evaluation, which is a bit rich coming from the 1960s, an era where architects asked ‘What if we made apartment blocks look like human filing cabinets?’ and barbers asked ‘What’s the most ridiculous haircut we can get away with?’

The point is that, with the benefit of decades of hindsight, we’d surely pick any number of cars from the annals of history that are uglier than the FJ55. Then again, the 1960s also brought the Miura, GT40, Giulia, E-Type, Cobra, Mustang, 911, DB5, 250 GTO, and SL Pagoda into the world. So maybe they were just too used to a good thing. 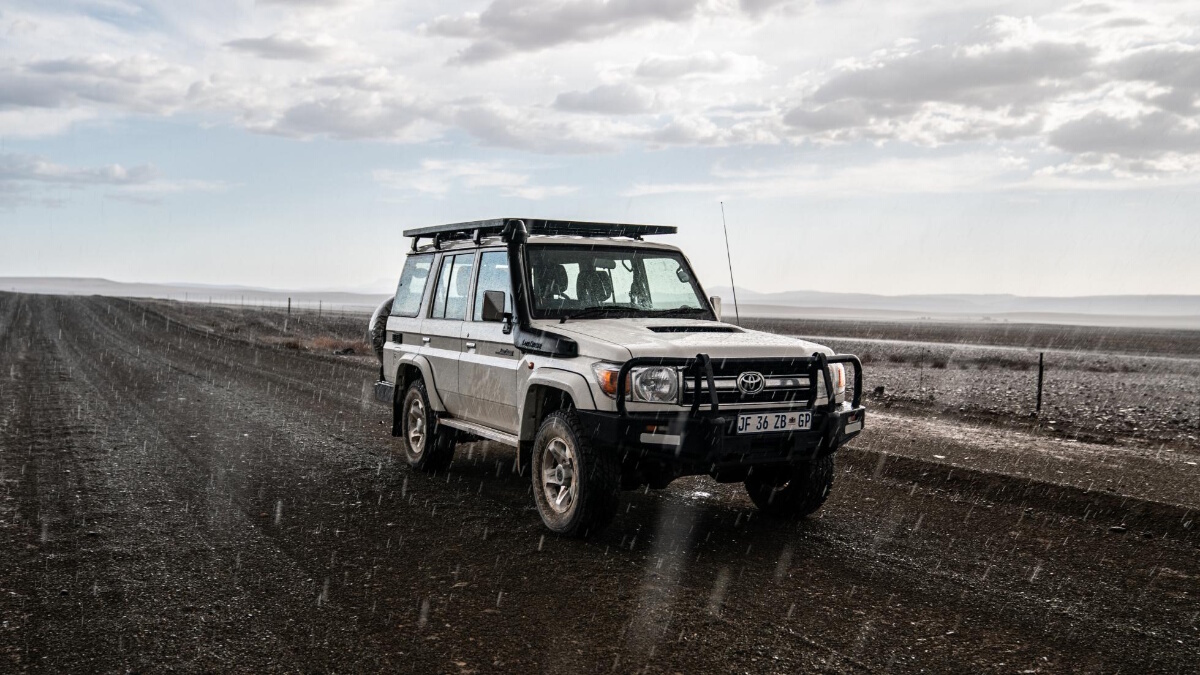 It’s fairly well understood that the Land Cruiser—particularly the 70 Series—is a rather tough bit of gear. If we were to liken it to a man going to a pub, the Land Cruiser is the one that walked 30km to get there in sub-zero sleet, quietly ordered 18 pints of the sort of beer that still has bits of twig in it, downed them all without the merest hiccup and walked the 30km home again in an arctic blast.

This is the kind of machine that you’d expect to find colors such as ‘white’ and ‘what, white not good enough for you, precious?’ It isn’t the sort of style-conscious urban posemobile that’d have to suffer through marketing colors like ‘Etruscan Gold’ (brown) or ‘Ecru’ (a different brown). And while we’re thankfully spared that, Toyota has seen fit to offer the 70 Series in shades like Merlot Red and French Vanilla. We’re not sure your average 70 Series driver is much of a Merlot drinker. 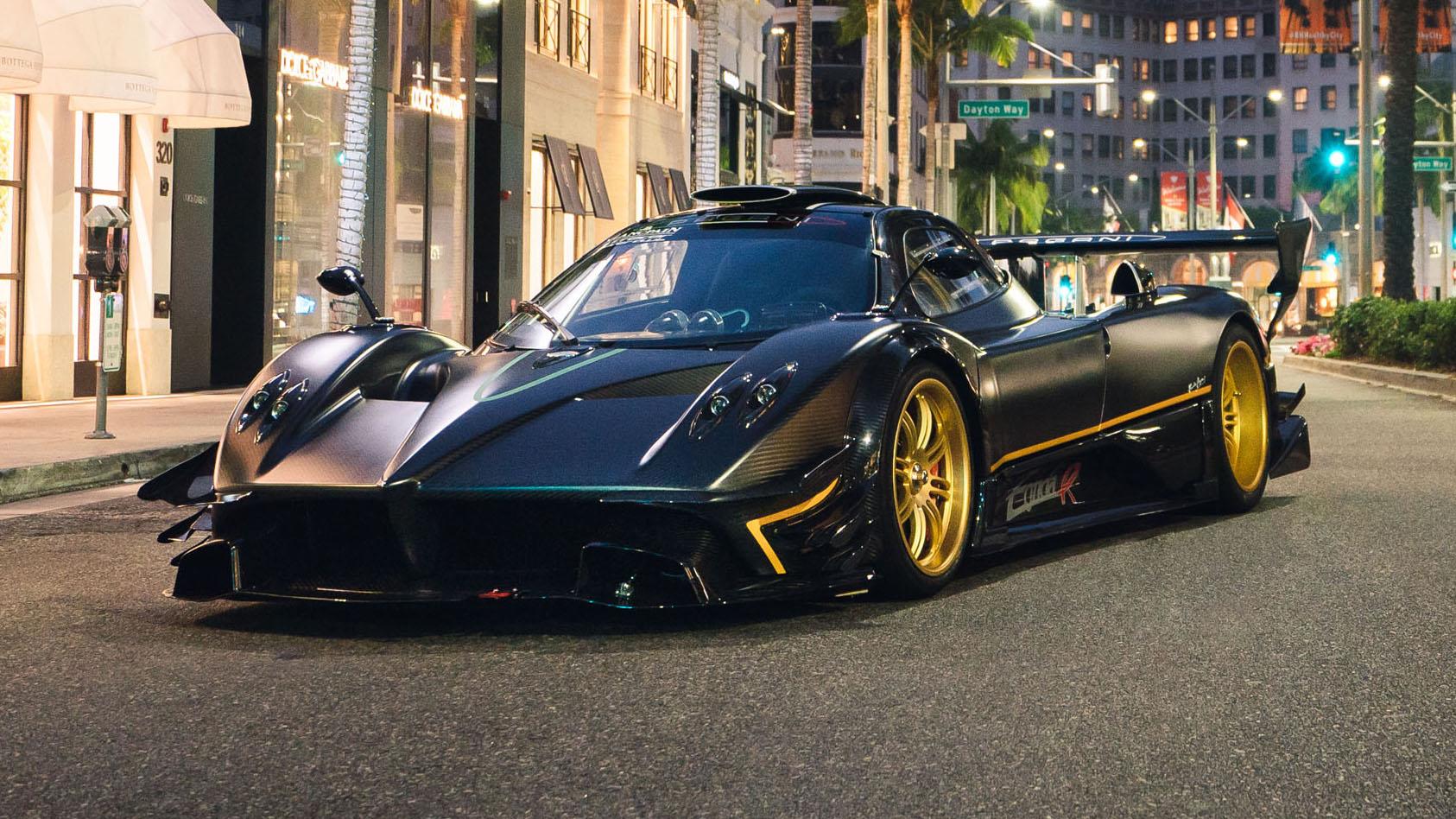 This Pagani Zonda R Evolution with only 1,000km on the odo is being sold for P328-M
View other articles about:
Recommended Videos
Read the Story →
This article originally appeared on Topgear.com. Minor edits have been made by the TopGear.com.ph editors.
Share:
Retake this Poll
Quiz Results
Share:
Take this Quiz Again
TGP Rating:
/20