Gallery: The wildest Lamborghinis to see the light of day

Aventador SC18 and racing-spec Urus? They got nothin’ on these
by Vijay Pattni | Nov 22, 2018
CAR BRANDS IN THIS ARTICLE

The history of Lamborghini isn’t worth repeating here, because as paid-up members of this ol’ Internet Enthusiasts Club, you’ll know it verbatim: Ferrucio Lamborghini wanted to outdo Enzo Ferrari, so he started his own company. Bedlam ensued.

An interesting angle, however, arises near the very start. In 1967, and with a flood of orders for the new Miura swelling Lamborghini’s fledgling coffers, company founder Ferrucio enlisted the help of Nuccio Bertone and Marcello Gandini to come up with something extravagant.

It was called the Marzal, and it featured a transversely mounted six-pot engine and some wheels. But it also featured gullwing doors with a significant amount of glassware. In short, it was excellent. So excellent, that Prince Rainier of Monaco—with Princess Grace by his side – would open the year’s Monaco GP with it.

Lamborghini has of course gone on to become the master of ceremonies when it comes to extravagant motors. So yes, while the ‘SC18’ Aventador one-off and Urus ST-X racer are indeed wild, we felt it a fine time to revisit Lambo’s most outlandish moments.

So, strap yourself down and enter the wild world of a Lamborghini designer’s mind. It’s a scary place. 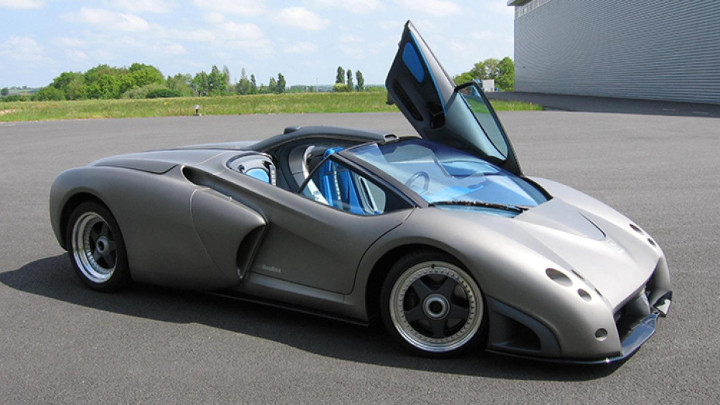 In 1998, months before Lamborghini’s ascent from the darkness and uncertainty of multiple ownership, comes this: the Lamborghini Pregunta. The denizens of the Paris Motor Show didn’t know what hit them.

But we do. It was a modified Lamborghini Diablo, running rear-wheel-drive in place of the later Diablo’s four-wheel-drive system, with 530hp from that sledgehammer V12. It could hit a standing kilometer in under 20sec and a top speed of 333kph.

It could also hit you in the face if you weren’t careful. It had two ‘half-roofs’ made from transparent polycarbonate, featured a combat-jet-derived cockpit, and used the same paint as a Dassault Rafale jet fighter. 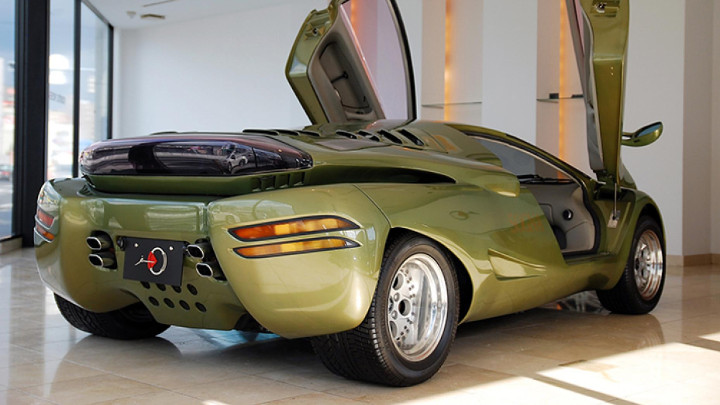 Mercedes-Benz used the occasion of the 1991 Geneva Motor Show to debut the W140 S-Class. And on the other end of the scale came a debut from a little Japanese tuner, who gave us the Sogna. We’ll give you a moment to look at the picture above.

From a Countach, Japanese designer Ryoji Yamazaki wheeled out a 5.2-liter V12 dream machine—literally, ‘Sogna’ is Italian for dream, and came about after Ryoji-san had a supercar dream.

It was hand-built from aluminum, painted green, and came with that 455hp Countach engine, which was good for a reported 300kph top speed. 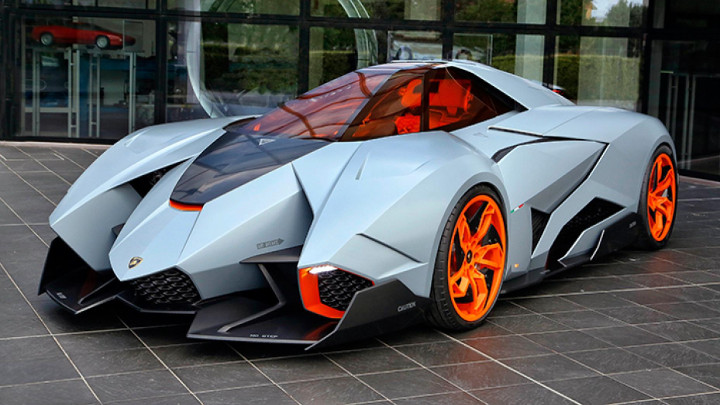 There are flaps in the body that flip open or closed depending on the driving conditions, extra rear intakes to cool the 600hp V10, LED clearance lights up front with ‘bull’s eyes’ side indicators, hidden ‘eagle eyes’ in the front intakes to scan the road ahead, and aeronautical-spec antiradar material used in the body. Antiradar material. If this isn’t brilliant, we’ll eat our padded windows. 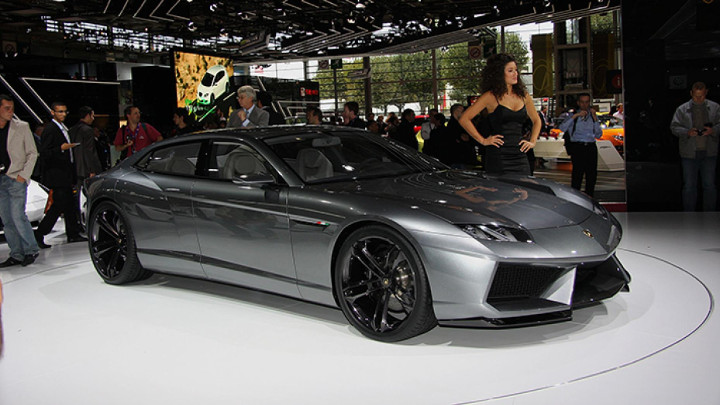 So it’s not as wild as, say, that Pregunta, but we felt this worthy of inclusion because it’s gorgeous, in a very Lamborghini sort of way.

Making its debut at the 2008 Paris Motor Show was this surprise, a four-door, four-seat Lamborghini sedan that could take on cars such as the Aston Martin Rapide and the Porsche Panamera.

Five meters long and two meters wide, the showcar utilized the Gallardo’s 5.2-liter V10 producing just under 560hp, and though there were many noises made upon its arrival about production, Lamborghini eventually shelved this idea in favor of the Urus SUV. A shame. 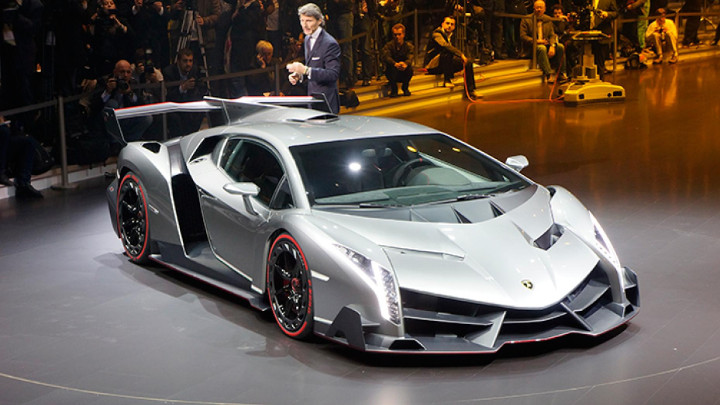 One of the strongest fighting bulls that ever lived, Veneno was most famous for gorging a matador to death in 1914. And thus became the bull after which Lamborghini would name its 2013 Geneva Motor Show surprise. Meet the, um, Veneno.

It’s based on the Aventador and has the same 6.5-liter V12, here boosted to 739hp and a 354kph top speed. There’s the same four-wheel-drive system, pushrod suspension, and monocoque chassis. What’s clearly not the same, however, is that plague-doctor-esque body. There’s an adjustable rear wing, a flat underbody, muscled arches, and a Le Mans-spec roof scoop.

Just three were built. And then they decided it wasn’t nearly bonkers enough, so they built a Veneno Roadster. Because Lamborghini. 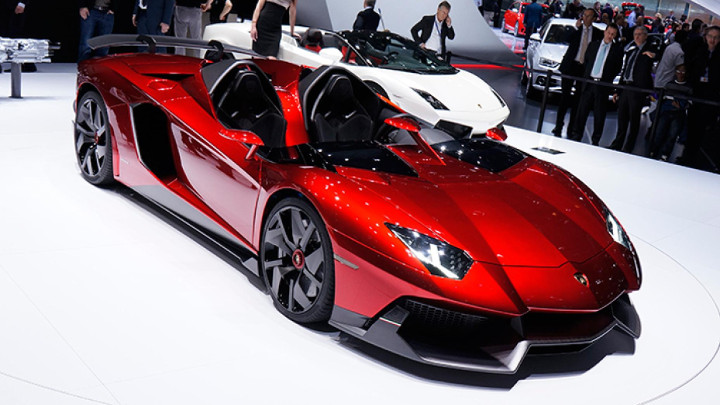 A roofless Lamborghini Aventador. Just let that thought sink in for a while. A roofless V12-engined supercar. Lambo design chief Filippo Perini told Top Gear that former CEO Stephan Winklemann had asked him to come up with something ‘special’ for the motor show.

The design was cooked up in six weeks, and it’s actually more than just an Aventador with the top chopped off: Only the front hood, the front and rear fenders, and the headlights are carried over from the production coupe.

There’s now a diffuser up front, a pair of humps at the back, and a carbon-fiber crossbrace over the engine. And you have to admit, it looks a bit cool. The ‘J’, incidentally, is a reference to the Lamborghini Jota, the Miura-based race car that remains entirely excellent. 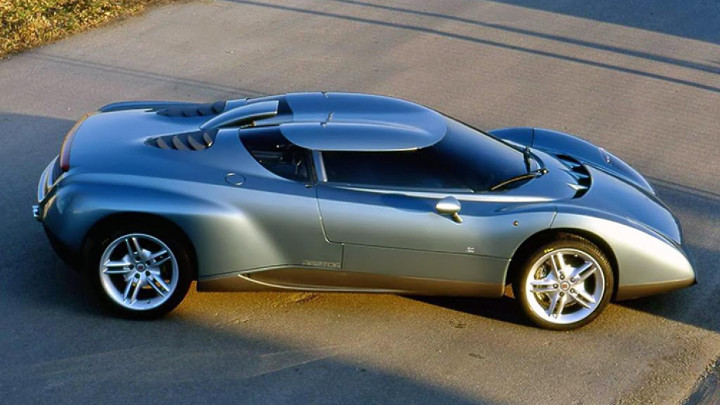 Naming anything ‘Raptor’ gets an instant seal of approval, but this was something else. Using the base of the four-wheel-drive Diablo, the Raptor was a concept car built in 1996 in collaboration with Zagato. Which means a double bubble roof.

In fact, there were no doors as such. Instead, the entire middle of the car swiveled up and forward to allow an uneasy ingress. Underneath sat the 500hp V12 from the Diablo, though without ABS and traction control. And with quite a bit of carbon fiber on board, it meant the Raptor was light. 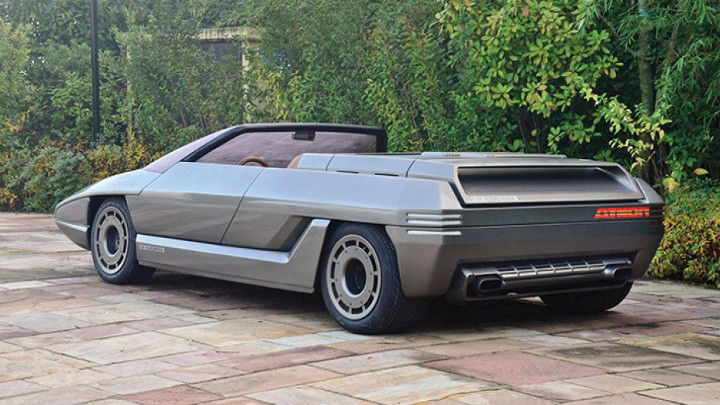 Named after the something to do with the Egyptians’ worship of the sun, this was built by Bertone and designer Marc Deschamps. We’re told the Athon explored themes close to Bertone’s heart in the way glass surfaces were integrated as parts of the bodywork or, indeed, as openings.

The cabin was forward-set, there was a tall rear deck, and the whole thing was finished off in gunmetal gray. Underneath it was all Lamborghini Silhouette, itself derived from the Urraco. So there was a 3.0-liter V8 producing 260hp—with four Weber carbs—and a five-speed manual gearbox. 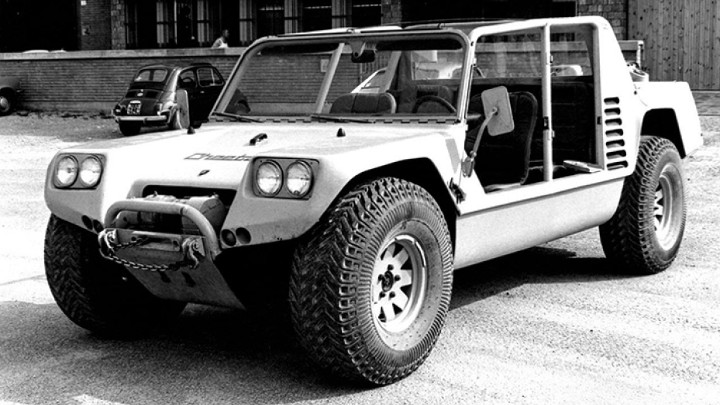 Yes. This is more like it. Meet the 1977 Lamborghini Cheetah, a sporting 4x4 that marked one of the lowest points in Lamborghini’s checkered history. Ah.

You see, the company was in dire straits near the end of the ’70s, and the owners needed extra revenue, and so took on contracts for other companies. One of these was chassis development on the BMW M1, another was for the US military on behalf of Mobility Technology International (MTI) to build this, the Cheetah.

A sordid state of affairs ensued—MTI’s original design sent to Lambo was ‘borrowed’ from Ford, Ford threatened to sue, Lambo had used up all its loan money for both the BMW/MTI projects on the Cheetah, BMW pulled out of M1 development, Lambo went into receivership—but Lamborghini’s new owners saw value in a monster 4x4.

A few years later, the Cheetah project would morph in the LM002, easily the coolest and most cathedral-like Lamborghini ever built. The spirit of this Cheetah, don’t forget, continues with the Urus SUV. 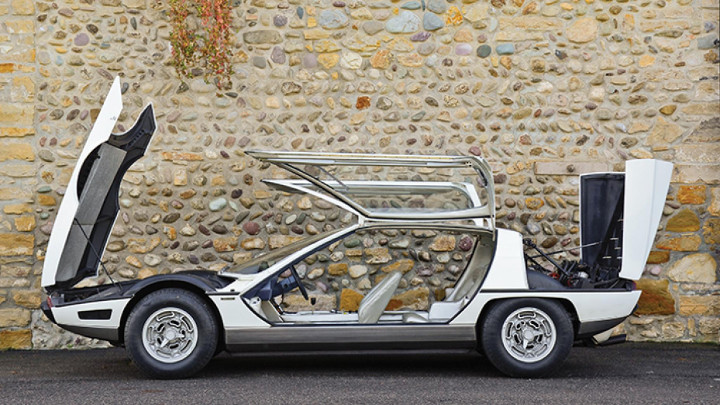 A one-off, four-seat gullwing Lamborghini concept fits right into this gallery. That it features a prototype straight-six engine makes it even more extraordinary.

As always, this 1967 Geneva Motor Show concept was named after a strain of fighting bull, with a transversally mounted six-pot—essentially the rear bank of a Miura’s V12— producing 175hp that would never see service in any other Lambo.

The chassis was based on a Miura’s—though extended—with a pair of long gullwing doors with large windows and a smoked glass roof. In fact, because of all this glass, Bertone helped engineer the air-conditioning, a necessity lest its occupants marinade in a very hot cockpit.

Ferrucio, a gent through and through, objected to the doors, however, offering the notion that “a lady’s legs would be there for all to see,” though his call went unheeded. Still, it paved the way for the Espada, and this very concept sold at auction a while back for the princely sum of €1.5 million (P89.5 million). 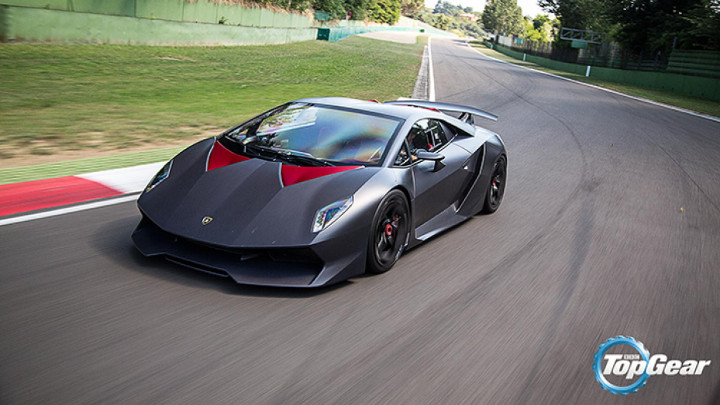 This Gallardo-based monster first appeared at the 2010 Paris Motor Show, featuring a power-to-weight ratio of 562hp/ton, a 0-100kph time of 2.5sec, and a world of pointy carbon fiber shaped to produce a Lambo jet fighter. 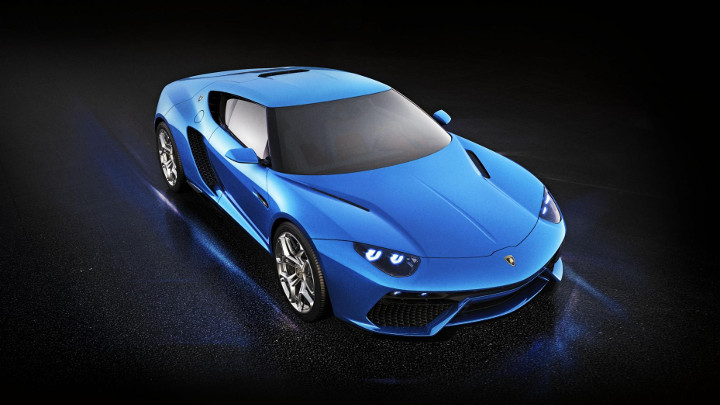 The Asterion is a bit different. Not because of how outrageously it’s styled, but because of how real it looks. And because it’s a plug-in hybrid, albeit one with a combined 910hp. Very Lambo. 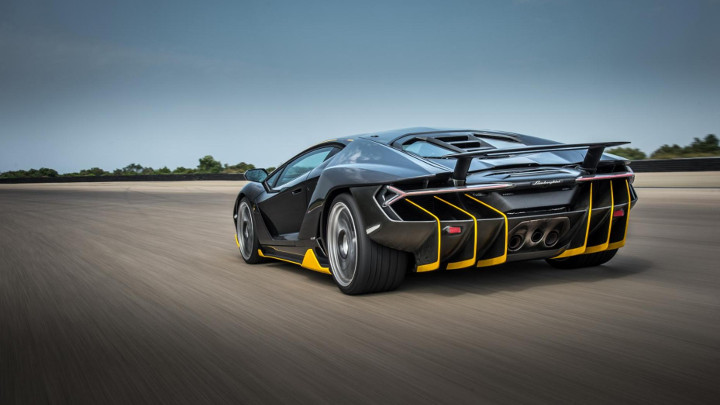 More than an Aventador in drag, the Centenario is lighter, more powerful, and faster than an Aventador. But more significantly, it’s the first Lambo with four-wheel steering. If you haven’t already, you must simply read our review. 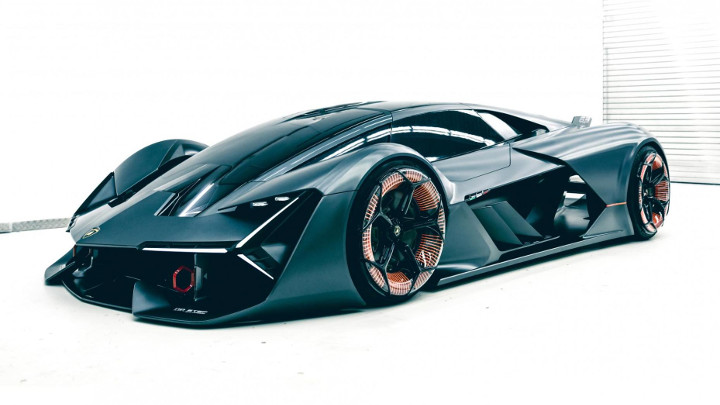 Lamborghini teamed up with the vaunted Massachusetts Institute of Technology (MIT) to build something that would “rewrite the rules on super sports cars” for the third millennium (that’s the ‘Terzo Millennio’ bit). A car that future generations of apex enthusiasts could stick a poster of on their bedroom walls.

Yeah, this is a car for a future where the technology to power it hasn’t even been figured out yet. Read the full debrief on this electric HyperThing here. 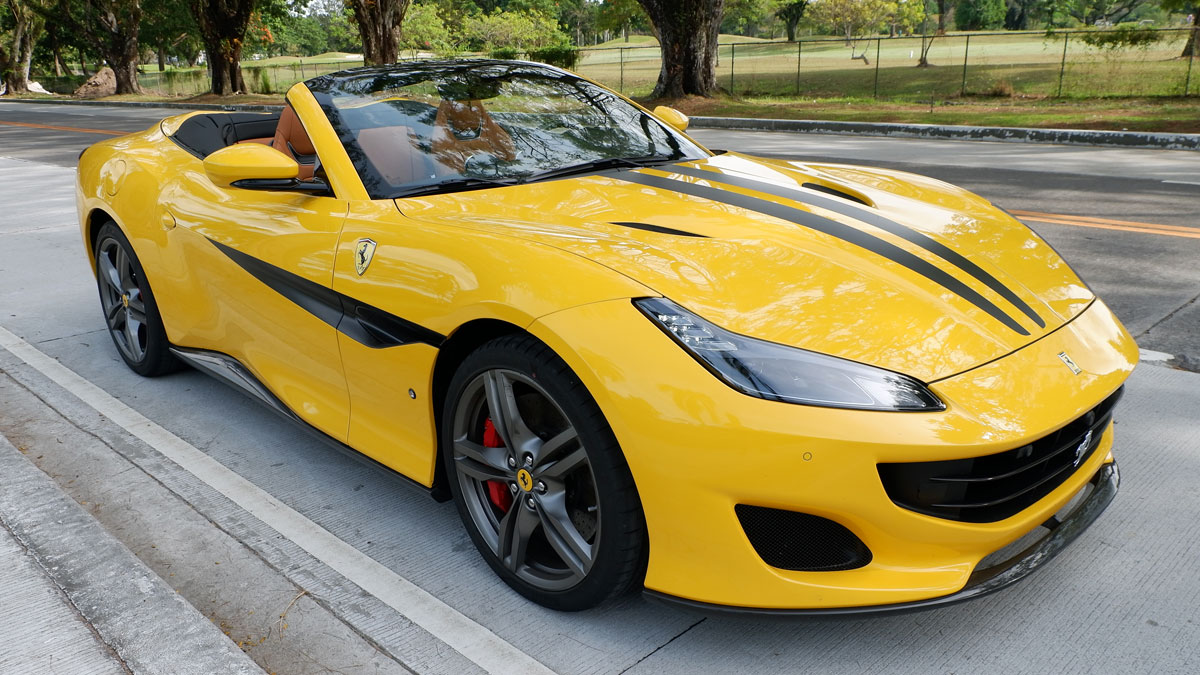 What it’s like to drive a Ferrari for the first time
View other articles about:
Read the Story →
This article originally appeared on Topgear.com. Minor edits have been made by the TopGear.com.ph editors.
Share:
Retake this Poll
Quiz Results
Share:
Take this Quiz Again
TGP Rating:
/20