Oh, look. It’s a hipster coming to tell us all about how cool old Delicas are.

No, we’re here to ask you a question: What’s that one car you know you shouldn’t like but you absolutely love? No, you first. No, we insist.

For us, it’s off-roaders, even though we’re about as useful in the wilderness as a SodaStream. And roughly as enthusiastic about off-roading as SodaStream owners are about fizzy water after the first month. And yet we’re still drawn to 4x4s like trolls to a comments section.

Is there some sort of point to all of this? 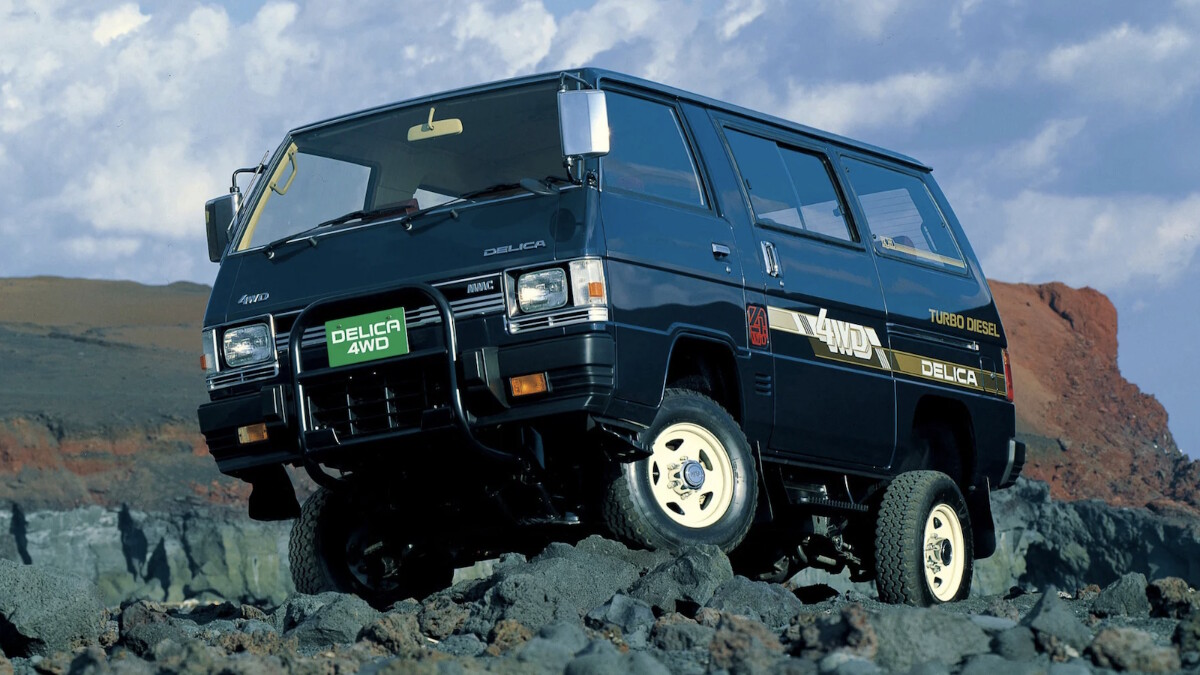 Eh...kind of. Really, you’re here to kill a few minutes, possibly while you’re on the loo. No judgment—we do the same, except we’re usually browsing cars and bikes for sale that’ll ‘totally pass roadworthy with just a couple of bits to sort out.’

Thing is, we’re also of an age now where the irresistible force of reckless youth collides with the immovable object of ceaseless practicality. And this skews the cars we look at from ‘old Italian coupe with enough rust holes to technically be a colander’ to ‘give us space for all our things or give us death.’

And that got us thinking: If only there was some kind of van/off-roader hybrid that could resolve this Sisyphean struggle of silliness and sensibility in one fell swoop. 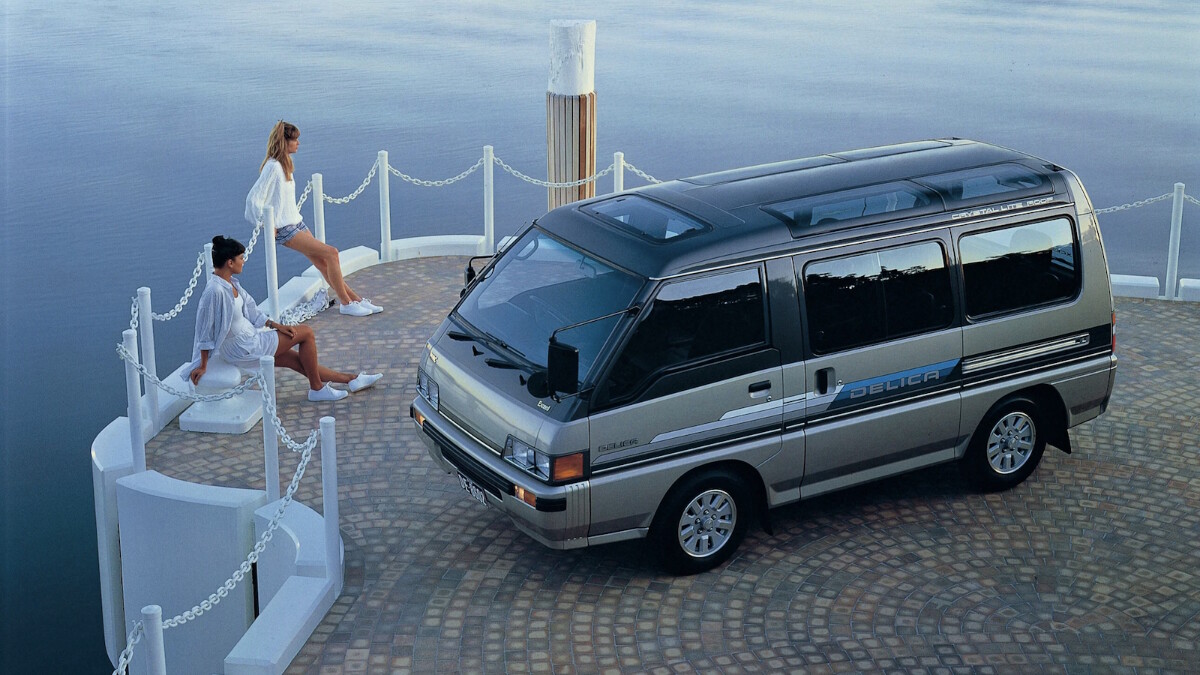 Not necessarily. Like the Volkswagen T3 Syncro, for instance—a brutalist-styled, bemusingly slow, yet bewitchingly desirable van with proper 4x4 running gear underneath. But as capacious and off-road-capable as it might be, it’s also a long-departed van from a time when people just accepted that, being a van, it’d have next to no power and not enough gears.

If only there was a modern version, one that held on to the idea of taking as many people as possible as far away from the beaten path as possible. Enter Mitsubishi, and presumably, a few quiet words about holding its Asahi.

I knew it! This was just a big preamble to talking about Delicas. 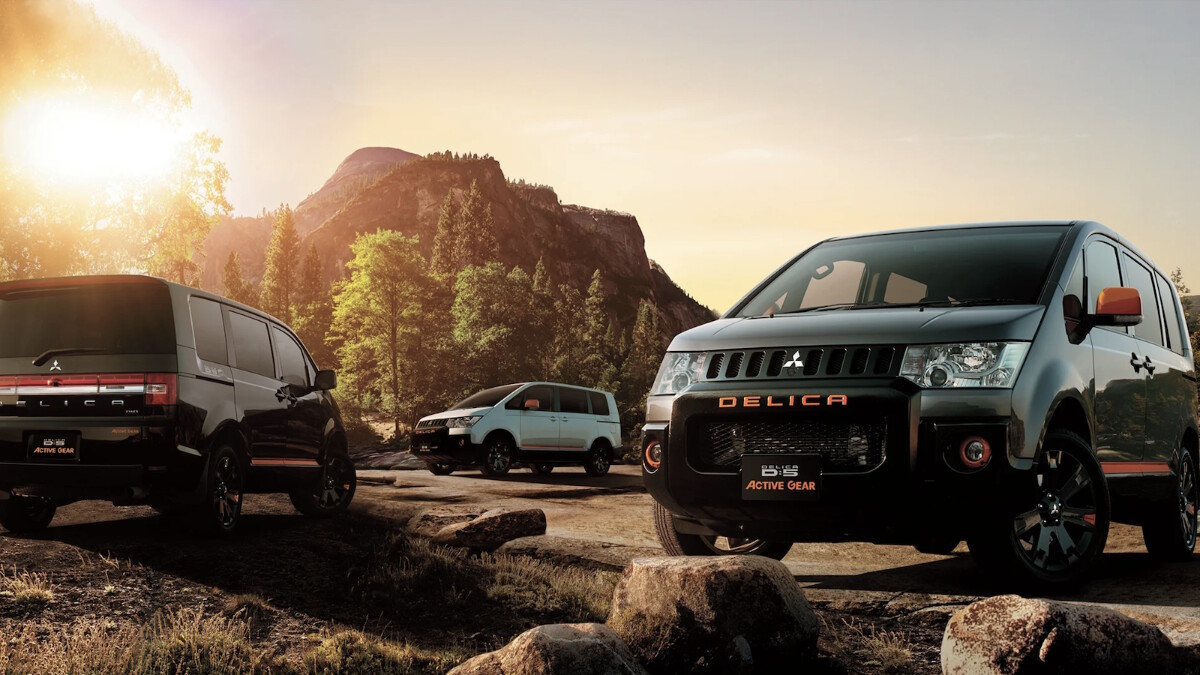 Yeah, okay, fine. But not old Delicas—did you know Mitsubishi is still making them, even the proper off-road ones? And they tick pretty much every box on the practicality checklist (because you can’t be practical without a checklist) and still let you harbor quixotic dreams of overlanding in the puffiest of gilets.

There’s even a version with waterproof seats, in case you’re overcome with the pressing need to go full Bear Grylls and come back from every nature walk looking like Arnie at the end of Predator.

So, wait—I can go and buy a new Delica, and it’ll be just as off-road-ready and awesome as the old one? 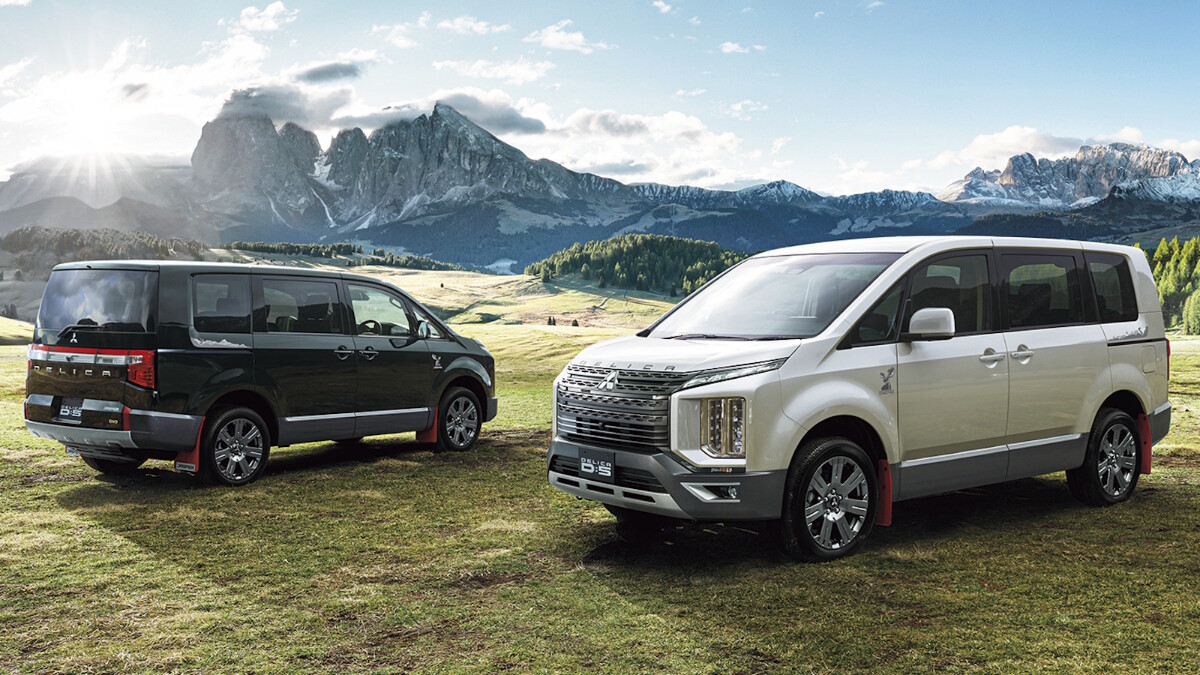 At the risk of wearing out the phrase, eh...kind of. The old boxy Delicas had transfer cases, high- and low-range, and other excellent off-road bits, where the new one has an electronic locking center diff and nothing else. That said, with them having more power and less weight than the old ones, off-road progress is apparently as good or better. Rock-hoppers might want to stick with the old models, but overlanders are pretty much set with the new one.

Now, if you’re Japanese, you can very much buy a new Delica. If you’re not Japanese, but have friends in the right places and money in the right bank accounts, we’re sure there’s a way for you to also find a new Delica in your driveway. Or secure compound, as it were. For most of the world, however, it’s a trip to Mitsubishi’s Japanese site for a game of Google Translate and mild to moderate pining.

That said, your pining might be tempered by the fact that Mitsubishi is not in the best place right now. And that means its lineup of cars is getting old. Take the brand-new Delica you see here. Looks...striking, doesn’t it? Now, consider the fact that the van you’re looking at is broadly the same machine as the very-much-not-brand-new 2007 model. Really, Mitsubishi’s in the business of giving its cars more facelifts than Jocelyn Wildenstein, and keeping them going until they’re old enough to get that reference.

So you’re saying that, even if I could get one, I shouldn’t? 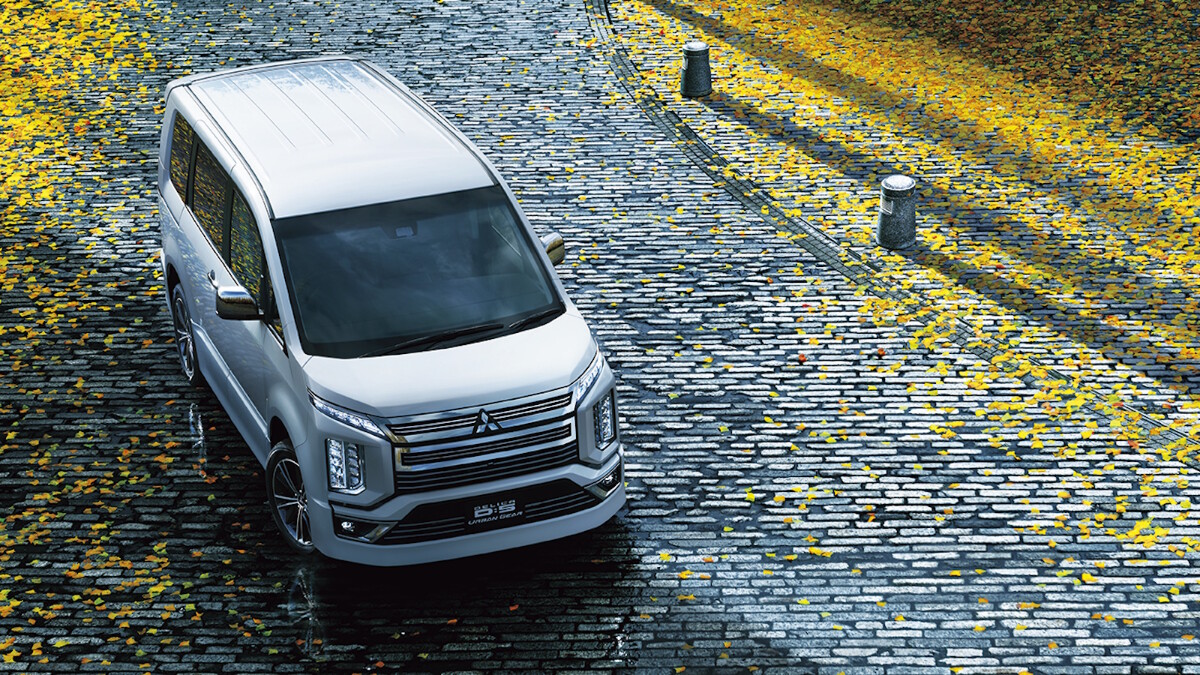 Not even slightly. You absolutely should buy one, by any legal means at your disposal. You should also get in touch with Mitsubishi and ask them to start selling these things outside Japan. Because what we need is for Mitsubishi to embrace its weirdness and bring it to the world.

Imagine if David Lynch had made regular movies with formulaic plots and logical endings. Sure, he could; it’s well within his abilities, but people wouldn’t remember his name because of it. It’s purely because of the weirdness, the eccentricity, the subversion of convention and the singularity of vision that people know and love his name and his works. Do they make much money? Hell, no. But they make enough to keep making more, and they’ll be remembered long after the umpteenth CGI sequel in the Captain Wow Cinematic Universe.

Now, think along those lines with Mitsubishi. What if it just stopped with the sops to the mundane and traditional, and only built quintessentially Japanese, oddball creations that make as much sense as a David Lynch flick but are equally beloved? Then, crucially, offered them to the world?

Yeah, the market is comparatively small, but it’s properly dedicated and entirely underserviced. Imagine being able to buy new kei vans, no matter where you live. Or mid-engined city cars. Or rotary-powered buses. Or hatchbacks with motorbikes in the back for last-mile commutes. Or indeed off-road-ready vans with seating for eight. Yeah, these weren’t all Mitsubishi’s ideas, but the light bulb wasn’t Thomas Edison’s idea either, and he seemed to do all right out of it.

But is the Delica fast? Does it handle well? Am I still reading Top Gear? 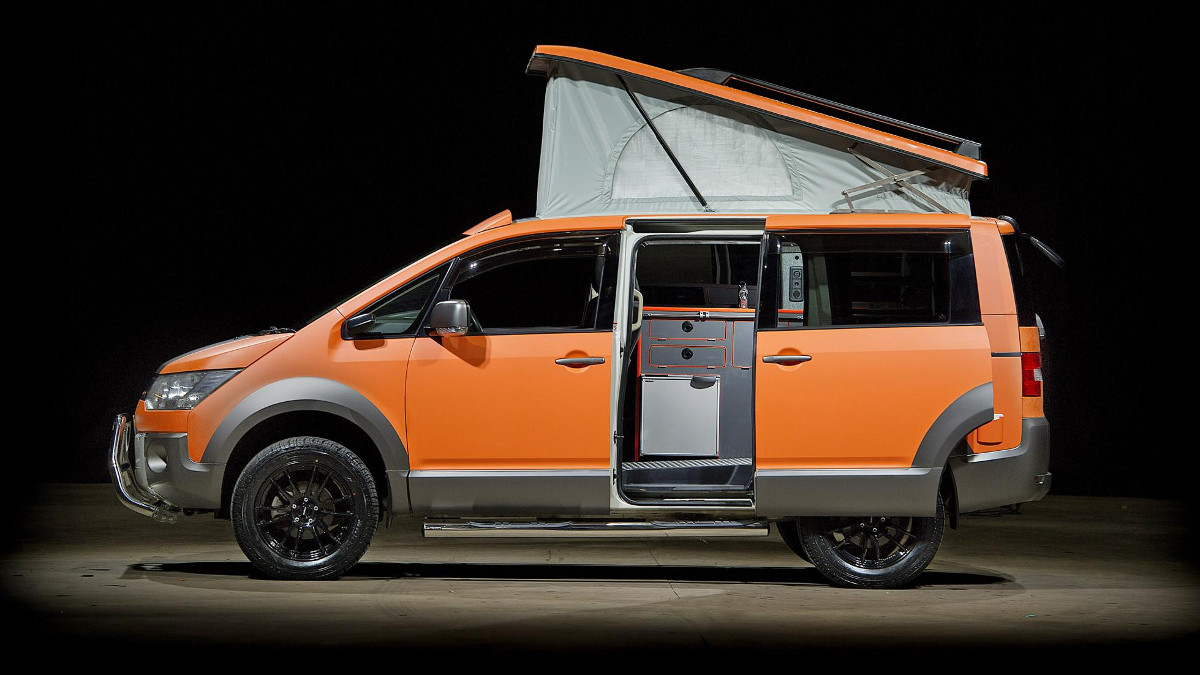 Notions of speed and handling prowess don’t apply here, chum; practicality is the new performance. So zero to 100 happens...well, as often as it happens in the real world. Never. It has enough of an engine and enough drivetrain ratios to do things that’d astound a T3 driver, like go up hills without slowing down, and cruise at highway speeds without floating valves. And it goes around corners at speeds that befit a high-riding van.

And sure, you’re unlikely to need an eight-seat, four-wheel-drive, double dose of silliness and sensibility. But surely you can talk your sensible self into something truly unsensible, use logic to endorse the illogical, pursue practicality to impractical conclusions? We can. Let’s show you how.

Let’s say you’re married. Well, getting a Delica could help you stay that way. Imagine if you were having a good old-fashioned midlife crisis, and you bought a Delica so you could do the ‘get active and get out there’ thing, instead of the ‘get around and get divorced.’ See? Spend that money on a Delica, not alimony.

Or perhaps you’re young, single, and free. This also probably means you’re young, and therefore cannot ever afford a house. With the Delica, you can be the vehicular manifestation of the fox and the grapes: I can’t have it; therefore, I don’t want it. Live in your van (be it down by the river or elsewhere) and practice a Buddhist approach to personal possessions.

That’s the genius of the Delica—it’s strange and ineffable enough that you have to invent scenarios in which it wouldn’t be complete overkill. And it’s practical enough to work in any of them. 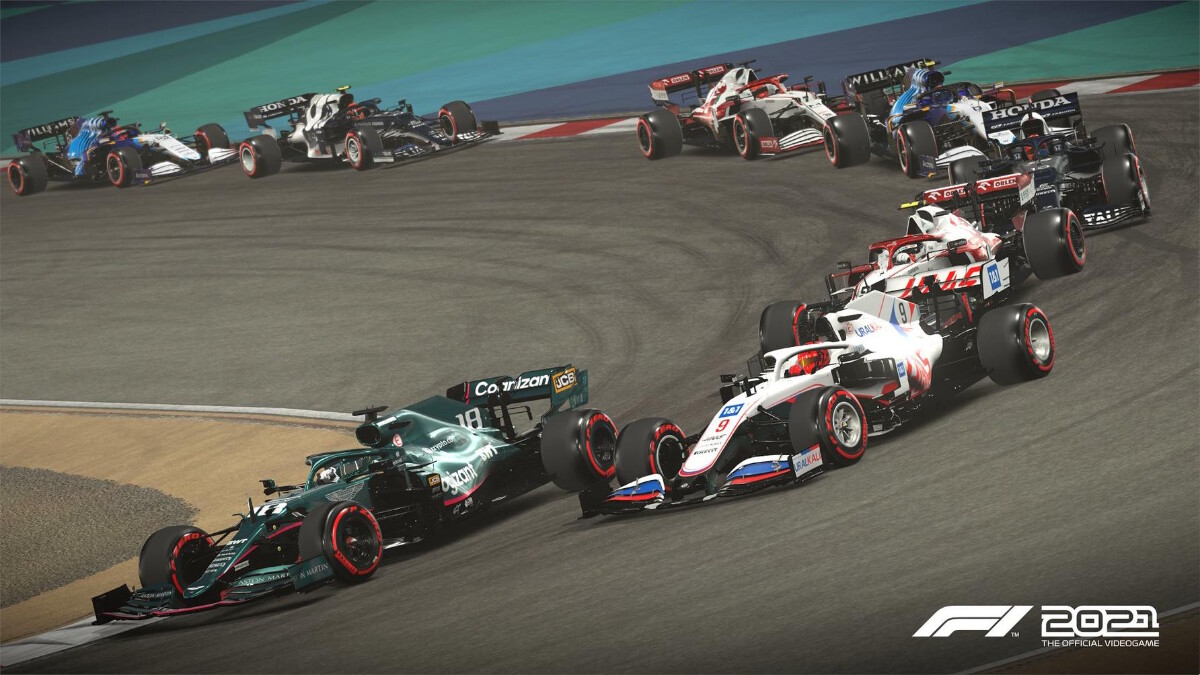