See how your brand ranks
Jun 22, 2010
CAR BRANDS IN THIS ARTICLE

Still a feeling bit queasy about buying a new car? Chill. Seven of the ten brands which topped J. D. Power and Associates' recent initial quality study in the picky US market are sold in the Philippines.

The study released by the global information firm showed that Porsche, Mercedes-Benz, Lexus, Ford, Honda, Hyundai and Volvo recorded the least number of problems within the first 90 days of ownership. The study is used by car manufacturers to make improvements on their vehicles as it is believed to be "an excellent predictor of long-term vehicle durability." 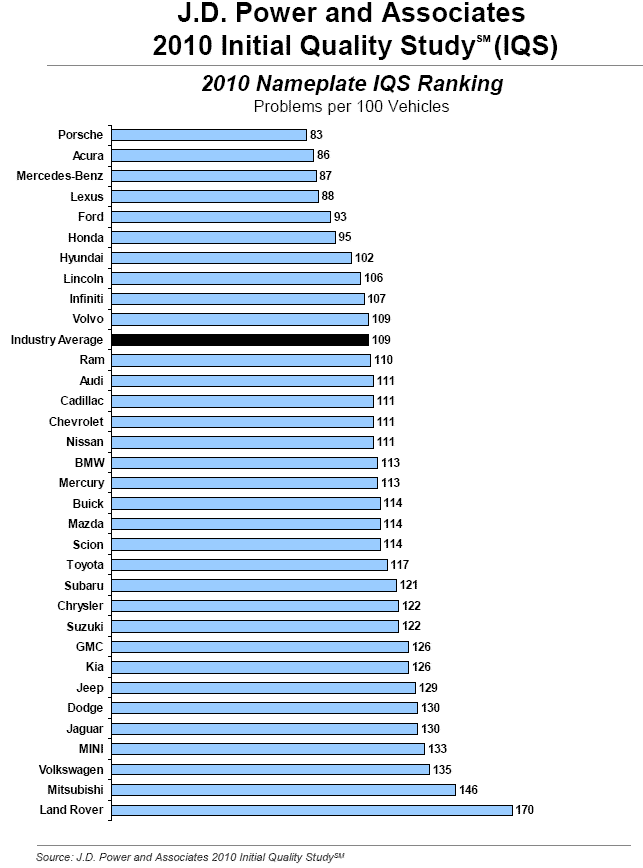 The firm measures a brand's IQS based on the number of problems encountered per 100 cars. The lower the number, the better the brand. J. D. Power and Associates noted improvements in Mercedes-Benz, up to second place from last year's 14th place; Lexus and Ford, which landed in the top five for the first time in the study's 24-year history; and Mini, which posted the biggest decline in reported problems.

It also recognized the significant drop of Toyota, which fell to the 21st place this year from sixth last year.

"Clearly, Toyota has endured a difficult year,"Recent consumer concerns regarding Toyota's quality are reflected in the nameplate's performance in the 2010 study. That said, Toyota's success was built on a well-deserved reputation for quality, and there is little doubt that they will do everything possible to regain that reputation."