Its Japanese rivals are in for a tough fight
by Patrick Everett Tadeo | Aug 18, 2015
CAR BRANDS IN THIS ARTICLE 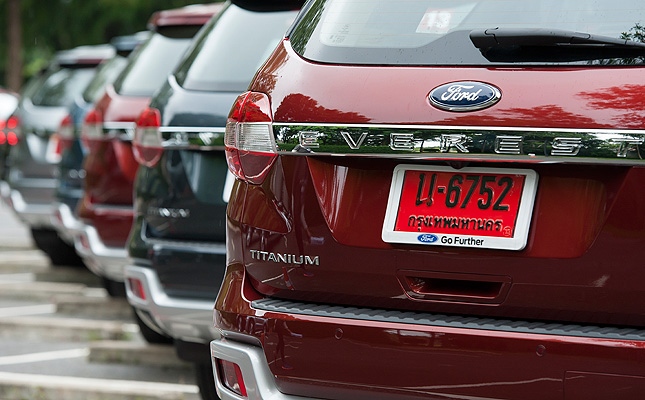 The delivery of the all-new Ford Everest to customers who pre-ordered it at its local launch in May will begin in September. With only a month to go, the American carmaker hosted journalists from all over the ASEAN region to test-drive its newest midsize SUV in Chiang Rai, the northernmost province of Thailand.

How big of a deal this shindig was for Ford exactly? Let's just say the Philippine media contingent included some 30 journalists, not to mention they were part of what was already the sixth wave of the Everest drive in Thailand.

The drive would take us through a route of over 140km in Chiang Rai, as we sampled the four-cylinder 2.2-liter 4x2 variant on the highway before switching to the five-cylinder 3.2-liter 4x4 to tackle the dirt trails. Mated to both engines was an intelligent six-speed automatic transmission that supposedly analyzes the driver’s driving behavior to improve both performance and fuel economy.

At first glance, it’s easy to dismiss the Everest as an SUV based on Ford’s best-selling Ranger pickup, especially with the latter's updated look. After all, the previous-generation Everest followed the same successful formula. This time around though, Ford’s engineers weren’t taking the easy way out. Although they declined to give a figure, they did say that the all-new Everest shares very little with the Ranger, with one engineer even citing that only the SUV’s front end shares common parts with the pickup. 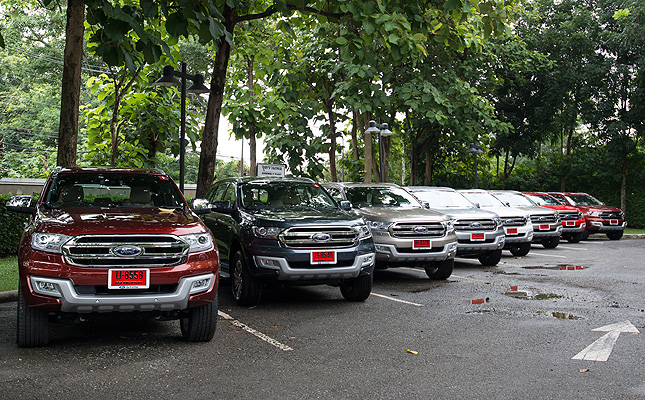 As we drove out of the resort we were staying in and headed for another one roughly 60km away, it quickly became evident that the all-new model was far removed from the Ranger indeed. It didn’t ride like a pickup at all but felt more like a crossover, thanks to its coil-spring front and rear suspension. That doesn’t necessarily mean that the Everest has turned into a soft-roader as the Watt’s linkage on the solid rear axle allows the axle to move up and down with very little lateral movement, almost eliminating the rocking motion that is common among typical SUVs. In addition, the rear shock absorbers are said to have been mounted outboard of the frame rails to improve stability and comfort over rough roads. 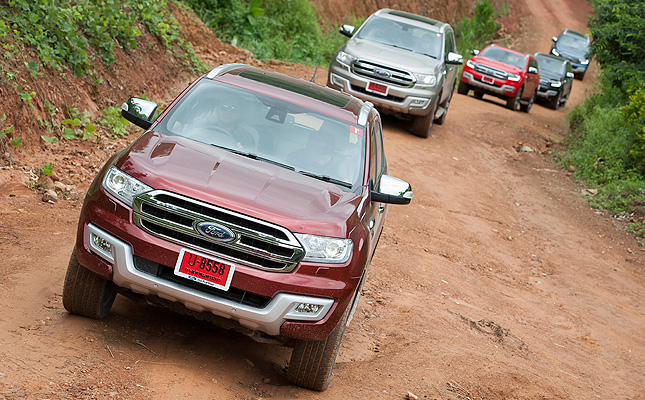 Beyond the improved suspension, the Everest has also received a myriad of technologies that enhance its off-road capabilities even further. An aluminum active transfer case (with torque on demand) sends power between the front and rear wheels for maximum traction. The electronic locking rear differential puts the power down to the wheel with the most grip even if one wheel is off the ground. Hill descent control, which not too long ago could only be found on luxurious SUVs, maintains a constant speed as the vehicle crawls down the side of a mountain, allowing the driver to concentrate on steering.

And then there’s the terrain management system, which adjusts the performance of the four-wheel drive system, transmission calibration, traction control and throttle sensitivity depending on one of four available settings: Normal for on-road driving with a 60/40 rear-wheel-biased torque split; Snow/Mud/Grass for enhanced torque transfer on slippery surfaces; Sand for even more aggressive torque transfer with higher throttle sensitivity; and Rock for the most aggressive torque transfer with precise low-speed control in extreme off-road situations. And if that isn’t enough, drivers can manually lock the transfer case in low-range four-wheel-drive mode for increased control as the Everest clambers over the rusted bodies of its less-capable competitors. 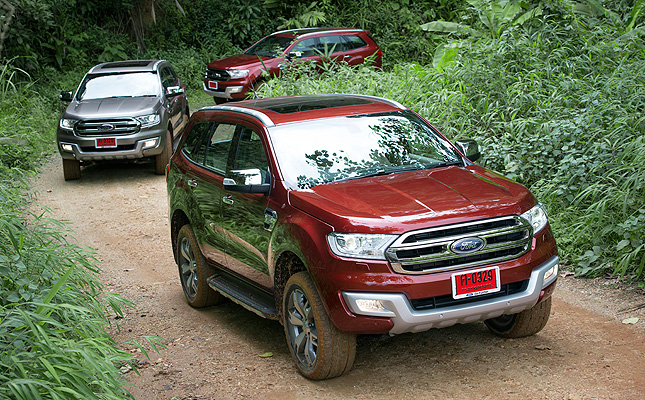 Serving as icing on the Everest’s rocky off-road cake are its water-wading capability of 800mm, ground clearance of 225mm, and approach and departure angles of 29 and 25 degrees, respectively.

Fortunately for us, we got to try out most of these features with the Thai marshals only providing us instructions on how to activate and deactivate the required systems at the start of each stage. As we drove through the off-road stages a few times, not once did we doubt ourselves if we were indeed doing the right thing--that’s how easy it was to drive the Everest off-road.

As immensely capable off the pavement as the Everest was, what really impressed us was its impeccable interior. 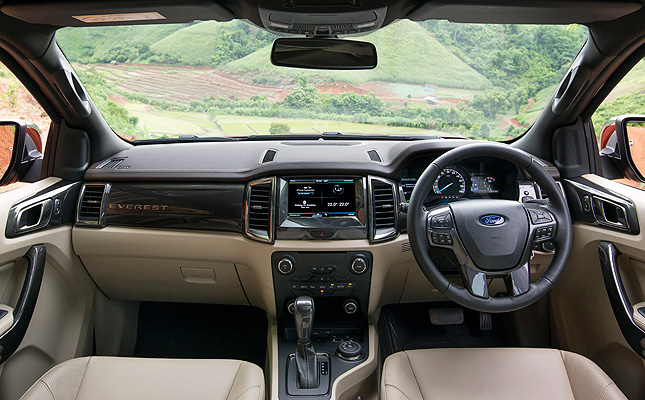 As you pull yourself up into the Everest using the grab handle on the A-pillar, a sense of space and robustness is conveyed by the cabin and its broad dashboard down to the thick, leather-wrapped steering wheel and the climate control system’s dials. Of the two variants that we tried, the interior of the 4x2 looked and felt more utilitarian with the faux brushed-aluminum trim around the eight-inch touchscreen infotainment system, the climate control vents, the steering wheel, and the dashboard panel for the front passenger. What’s even better is that the 4x2 came with leather seats, although it didn’t feel as premium or as supple as the material in the 4x4 unit.

For the 4x4 variant, the aluminum-like trim is replaced with glossier plastic with the dashboard top now covered with what looked and felt like real leather with authentic stitches. 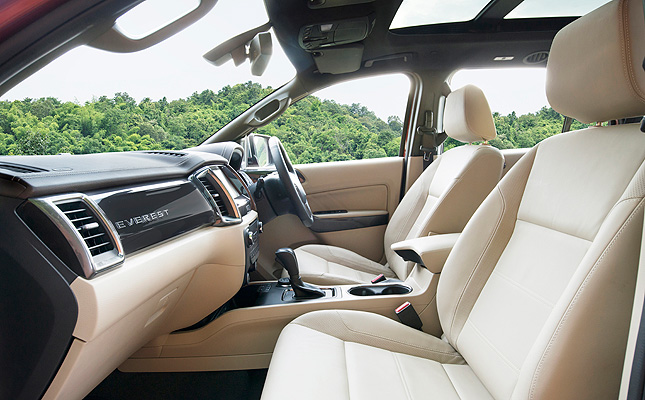 Of the two color schemes for the interior, the dark gray ‘Basalt’ felt homey since it blended well with the dashboard, the center console and the light-gray headliner. Meanwhile, the beige 'Flaxen' had a more luxurious appeal. 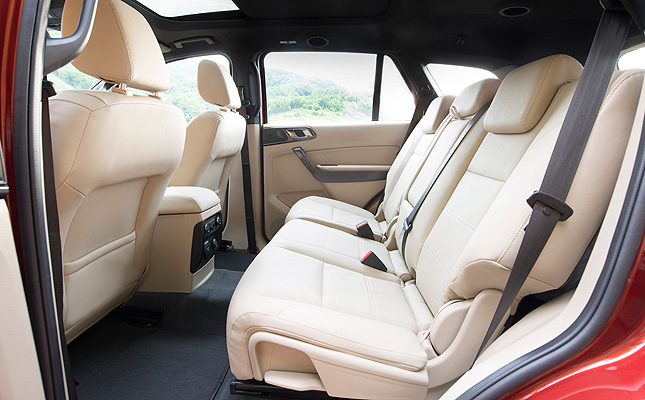 Ford Asia Pacific vice president for product development Trevor Worthington, however, expressed confidence this wouldn't be the case. "Part of the market is for owners who like to be driven around, which is the segment of the Explorer," he explained. "The Everest was made for those who still like to take the steering wheel and drive themselves around town or even off-road."

For an SUV in this price range, the coolest party trick of the Everest is its active noise cancellation technology. Not content with using just sound-deadening insulation materials, Ford utilized the same technology found in premium headphones by using three highly sensitive microphones mounted in the Everest’s interior headliner--two over the first-row seats and one over the rear--to detect and measure engine noise that is then supposedly canceled instantaneously and continuously using a control module through the Everest's 10-speaker audio system. 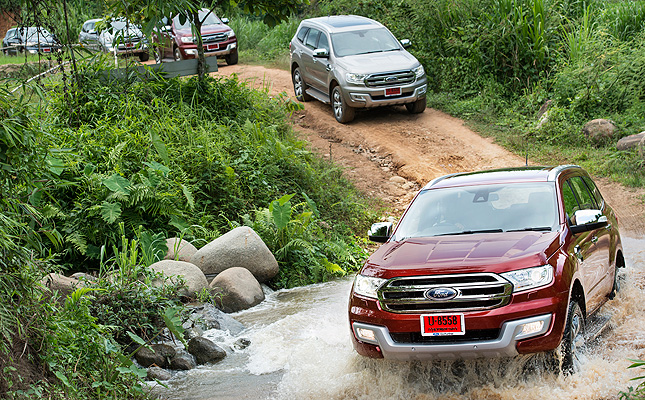 Ford culminated its "deep dive" session by having an Everest demonstrate its articulation ability. However, unlike similar demos by other car brands using a standard model, Ford rolled out a cutaway version using one of the first pre-production units for us to best appreciate the mechanicals in motion inside this capable midsize SUV.

"The new Everest is a hugely versatile vehicle that is equally at home in busy urban traffic and in the most extreme off-road environments the world has to offer," Worthington added. "Its unique blend of tough capability and exceptional on-road comfort will go far beyond what our customers have come to expect from a seven-seat SUV." 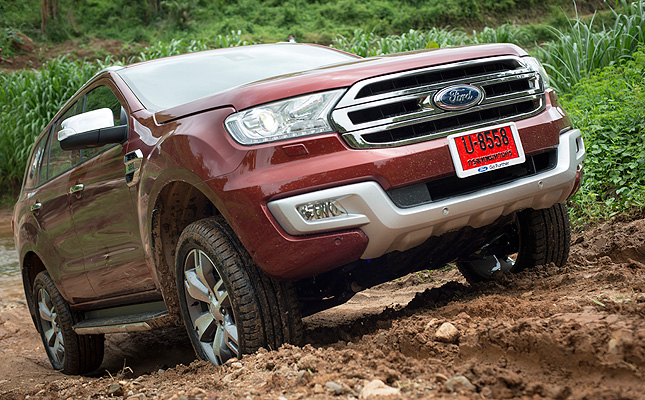 While we found our time with the all-new Everest in Thailand to be brief, it was enough to give us a good sampling of what this next-generation SUV has to offer. Right off the bat, the Everest has features that put it at the very top of its class--for the next few months at least, until the latest versions of its Japanese competitors become available to the public. If said rivals turn out to be lacking in features and refinement, the new Everest will rule the roost in the next couple of years while its adversaries play catch-up. 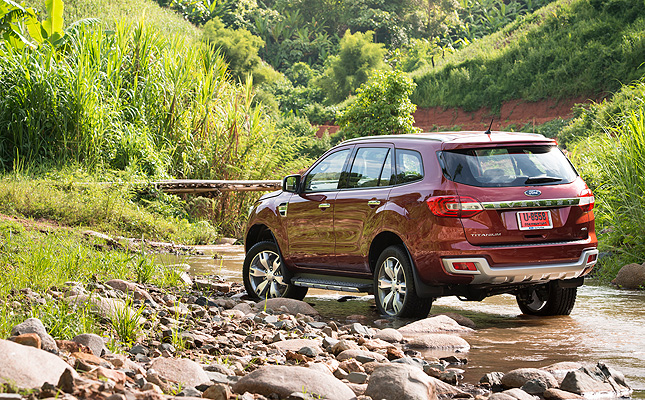 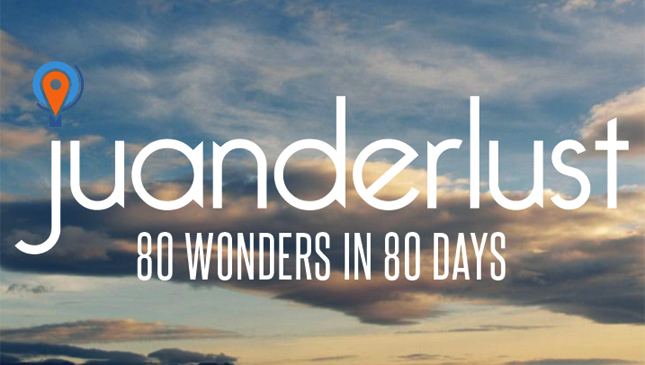 Are you ready for an epic road trip across the country?
View other articles about:
Read the Story →
This article originally appeared on Topgear.com. Minor edits have been made by the TopGear.com.ph editors.
Share:
Retake this Poll
Quiz Results
Share:
Take this Quiz Again
TGP Rating:
/20