No shortage of concept-car flourishes here
by Stephen Dobie | Dec 11, 2021
CAR BRANDS IN THIS ARTICLE

It feels a little while since we’ve had a Vision Gran Turismo concept, but they’re back. And how. This is Porsche’s first, and a wheeled U-turn to add to its generous collection.

Those of us of a certain age will clearly remember picking up the very first Gran Turismo in 1997, carefully popping the disc under the gray lid of our PlayStation 1, and excitedly perusing the many and numerous cars on offer to find...no Porsches. In their place, some weirdly familiar-looking things going by the name ‘Ruf.’ 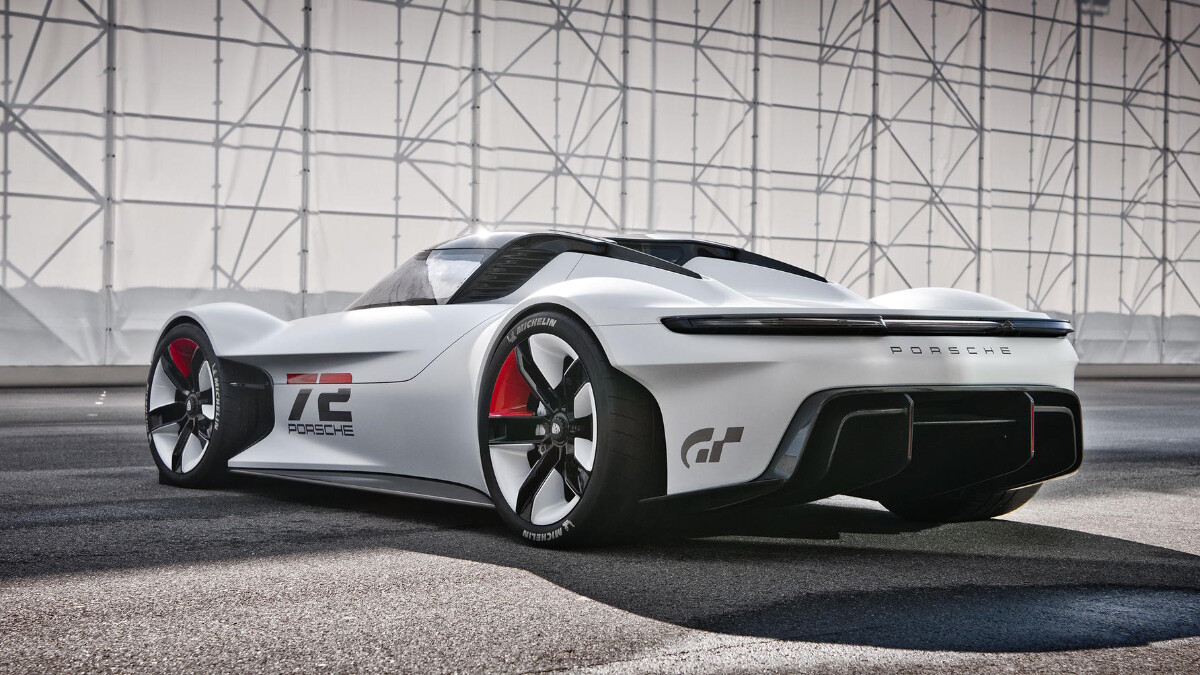 Yep, for years Porsche didn’t officially supply its cars to the franchise owing to an exclusivity agreement with Need for Speed, something that’s only changed in the last five years. Its cars joined Gran Turismo in 2017, and now, as if to solidify the friendship, comes the Porsche Vision GT concept.

“I don’t think anybody has been fired because of that decision back then!” jokes Porsche’s brand and partnerships boss Deniz Keskin, before informing Top Gear that this is “the first Porsche explicitly designed for a computer game.” 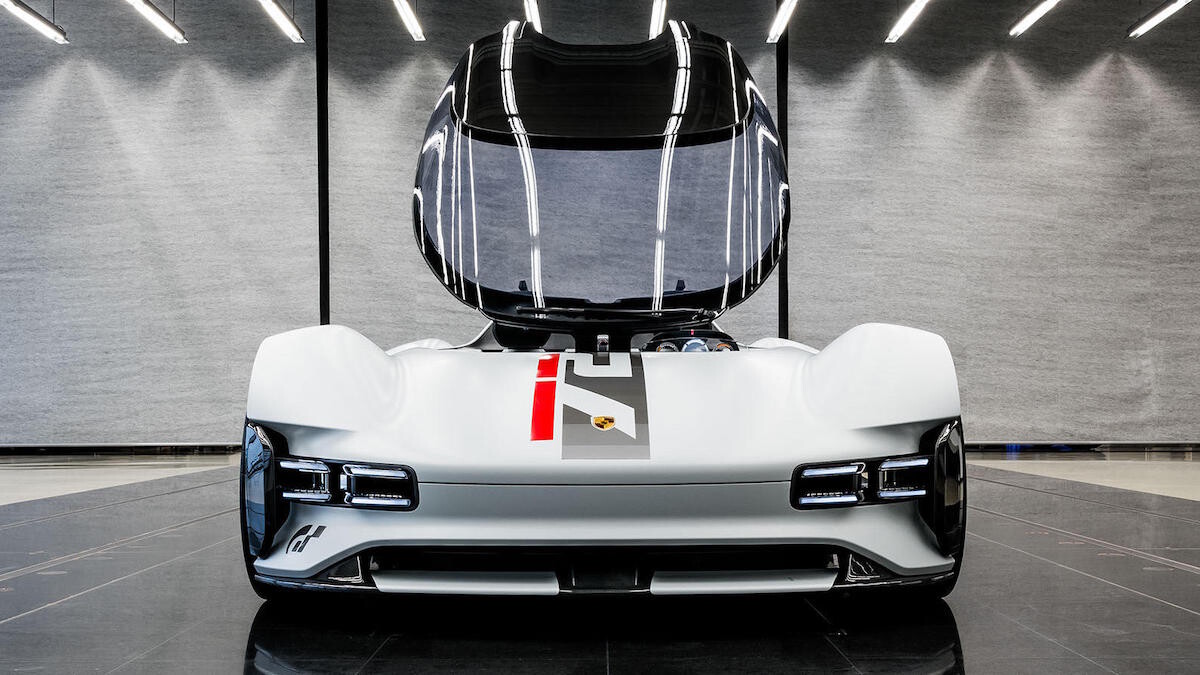 It’s fully-electric, as you might reasonably expect, and it’s been over two years in the making. We’re told the design is as pure as possible, with all of the visual weight nipped out of it and a stature that recalls the 356 and 550 sports cars of Porsche’s early years.

“Looking at some Vision GT cars from other companies in the past, we could see some were huge,” says exterior designer Ingo Bauer-Scheinhütte, “uber-hypercars that looked more like fighter planes and less like cars. 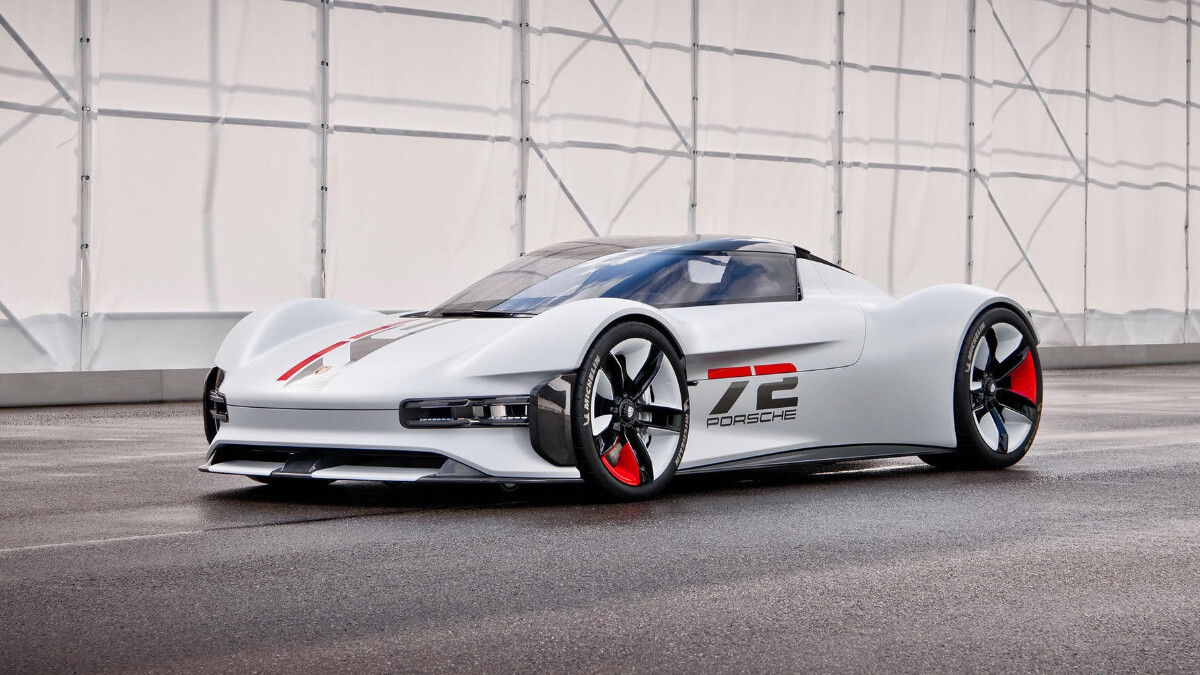 “The Germans are a serious bunch, and we take car design seriously as well. So we decided to do something that feels real and which you imagine seeing on the road in a few years.”

It’s designed to look mid-engined, suggesting perfect weight distribution, and while the voluptuous fenders we know well from Caymans and 911s are carried over, the front pair no longer house the headlights. Instead, those are slender ‘jewelry-like’ units that are dropped further down the car—with the virtual world meaning no pesky road or race regs need to be met in terms of the height they’re placed—for both a unique new look and the chance to open up vast new aerodynamic possibilities. Just look how much air can sweep between the lights and the wheel arches and up the Vision GT’s flanks. Pretend, pixelated air, that is. 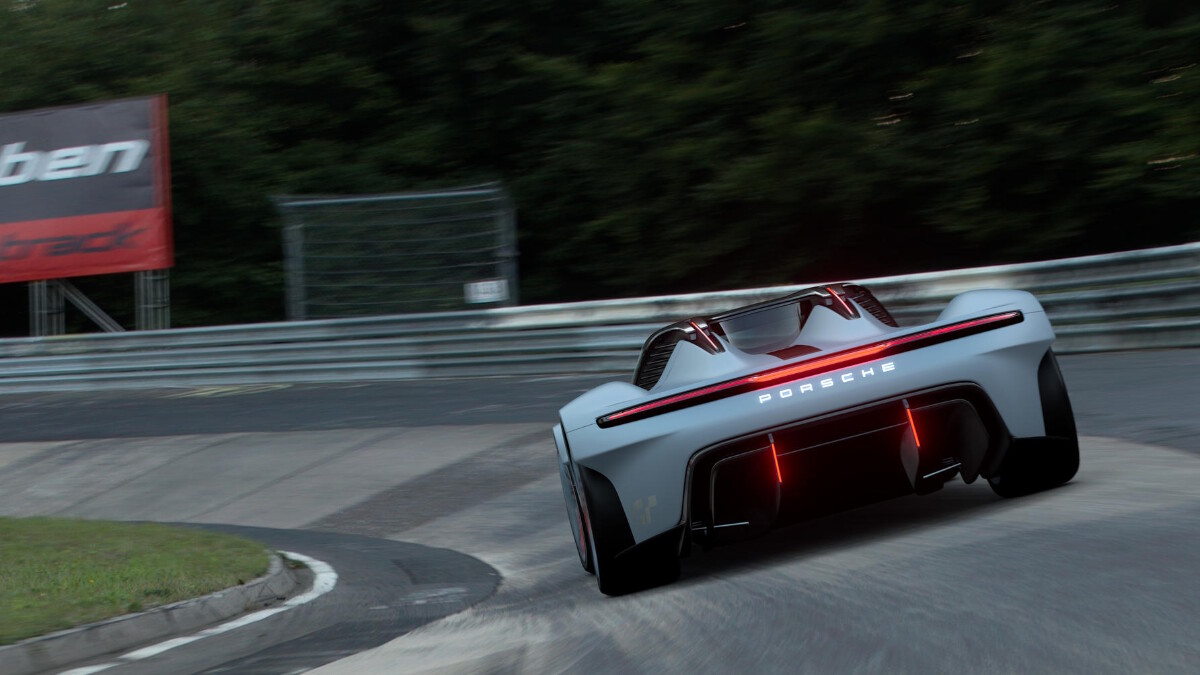 “The appeal of a Porsche comes from its purist design,” says GT’s Kazunori Yamauchi. “And in terms of engineering expertise, both we and Porsche follow the same perfectionist philosophy. We share the same passion for racing and are looking to the future of the car.”

Porsche says its Vision GT previews how electric race cars could look in 10 years’ time, which does mean it steps on the toes of the Mission R concept a little, too. But a month that gives us two separate Porsche EV racers is a pretty good month, we’d say.

And the virtual world has opened up other possibilities here. There are no doors, just a front-hinged canopy that flips vertically up. Maybe this is a Vision GT that’s a little jet-fighter-ish after all, huh? 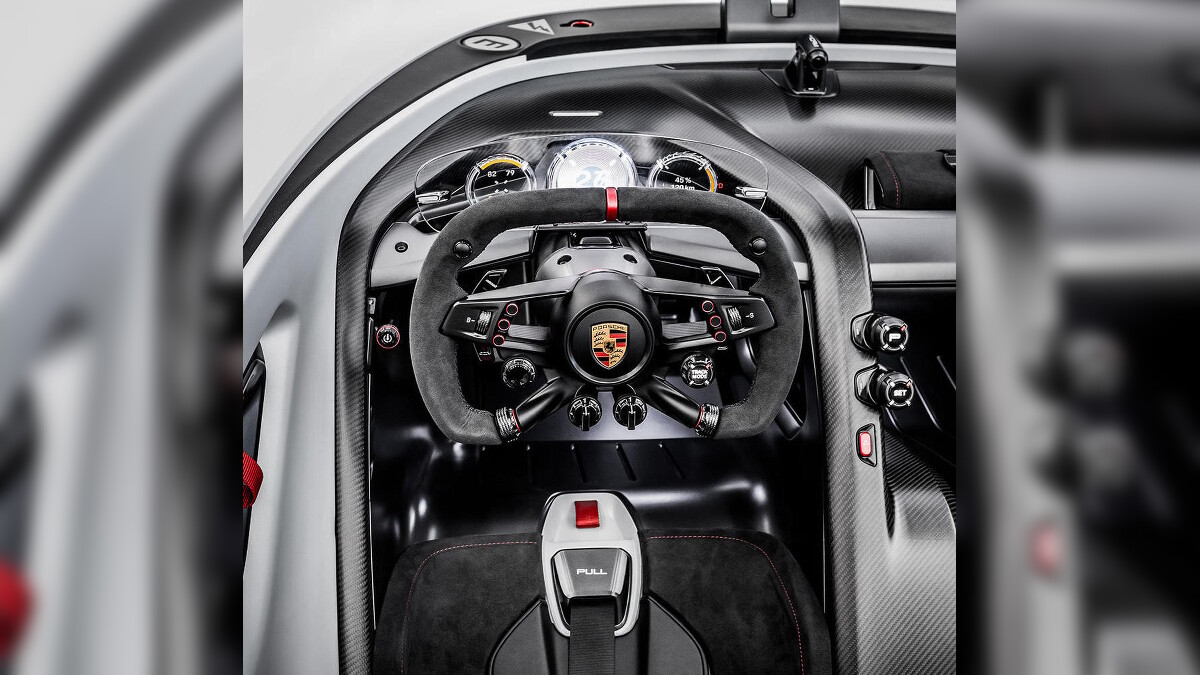 Inside, there are no seats as such; instead, you have Race-Tex faux-suede pads stuck to the chassis with the pedals shifting fore and aft. The steering wheel apparently mixes analog and digital controls—curious for a car designed purely for the digital world, but what the heck—while the instruments are holograms. The kind of thing that Porsche simply couldn’t justify in real, physical cars.

In fact, the whole Vision GT is a bit of a ‘no limits apply’ scrapbook. There’s a long-overdue appearance of a split active rear-wing function that Porsche developed for the 917 race car before the rulebooks kiboshed it. The canopy is fingerprint-operated. ‘Floating headrests’ adjust for whether you’re helmeted or not. Porsche’s designers are living out fantasies usually curtailed by lawmakers or the financial department. 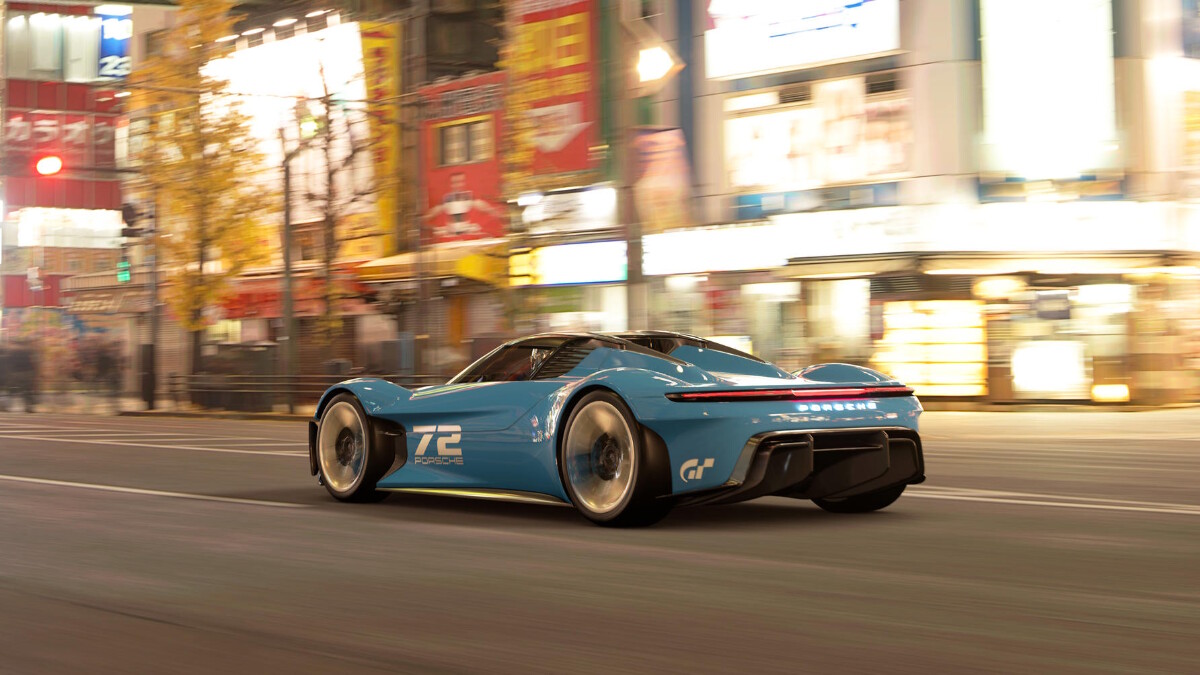 But will any of it make production? “There’s no relationship with a road car—it’s purely for Gran Turismo,” says Bauer-Scheinhütte. “Of course, there will always be design elements you might see on future cars. We do concept cars to inspire ourselves, try out new things, and develop our design language.”

You can drive the Porsche Vision GT in March 2022, when Gran Turismo 7 launches on PlayStations 4 and 5. But for now, which bits would you most like to see slip into production? 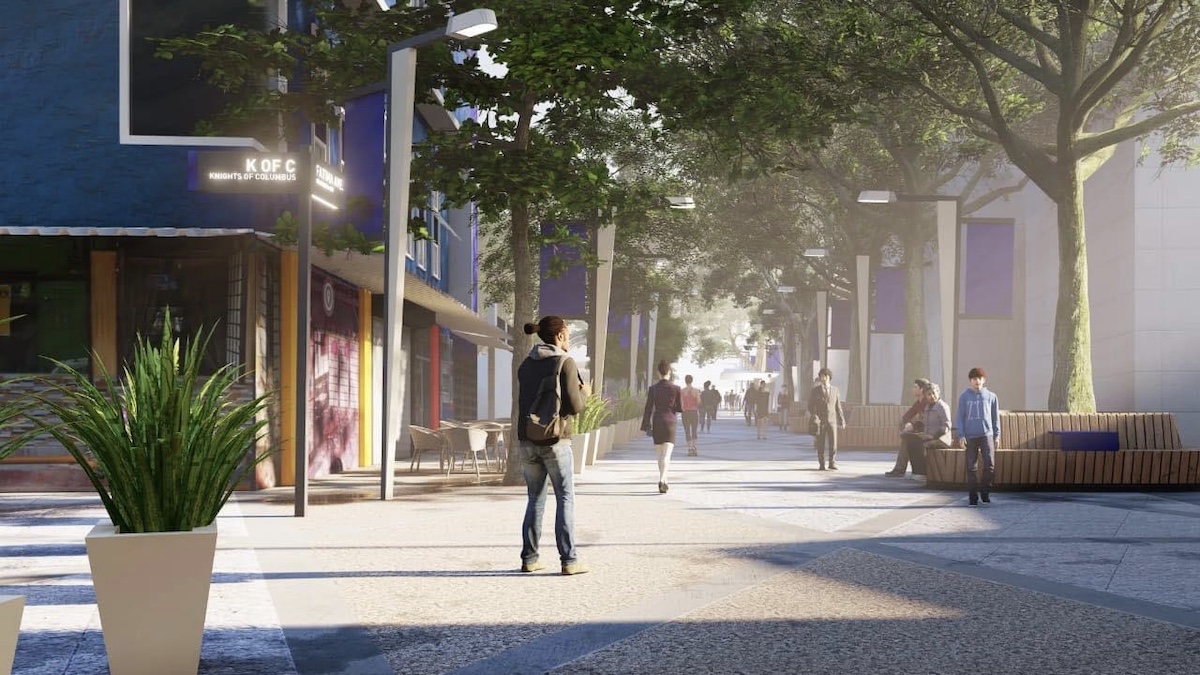 Valenzuela City is turning Fatima Avenue into a pedestrian-friendly urban space
View other articles about:
Read the Story →
This article originally appeared on Topgear.com. Minor edits have been made by the TopGear.com.ph editors.
Share:
Retake this Poll
Quiz Results
Share:
Take this Quiz Again
TGP Rating:
/20