Grab an invite to the Ford Mustang party
by Vernon B. Sarne | Apr 15, 2015
CAR BRANDS IN THIS ARTICLE 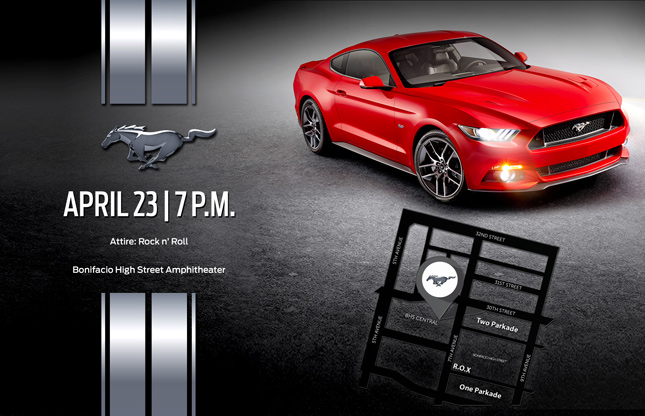 Okay, here's the thing: Ford Philippines is formally launching the sixth-generation Mustang on April 23 at the Bonifacio High Street Amphitheater. You will recall that the company announced back in December that it was bringing in 64 units of the 50th Anniversary Limited Edition Mustang, but that wasn't the official launch of the iconic pony car in the Philippine market. And neither was the Mustang's presence at the recently concluded 2015 Manila International Auto Show.

The proper red-carpet welcome for the all-new Mustang is happening next week, and Ford Philippines is doing it with a rock concert party. As expected, guests include "media, executives, dignitaries, and Mustang owners from the Mustang Club of the Philippines and the Mustang Enthusiasts Club." But Ford Philippines' dynamic assistant vice president for communications, Joseph Ayllon, wants a handful of deserving Top Gear Philippines readers to take part in this big event, which is by invitation only.

"The iconic Mustang has a huge following in the Philippines, and we’re so thrilled to show the latest Pony that will soon hit the streets of Manila," Ayllon told us. "We at Ford would like to share this momentous experience with Top Gear fans and readers so they, too, can witness the official and exclusive reveal of the all-new Mustang."

So we're looking for five (5) of our readers--plus one (1) companion each--to party with us and the Mustang. Before we lay down the mechanics, here's what the lucky readers get to do at the party:

* Have exclusive photos with Guidicelli and Marcelo (and the Mustang, of course) to be posted on Ford Philippines' Facebook page.

Now, how do we pick the five readers (and one companion each) who will go with us to the Mustang rock concert party? This simple:

1. Take a horizontal, high-resolution photo of yourself with any Mustang-themed object (the car itself, a shirt, our magazine cover, etc.), and send it to tracy.carpena@summitmedia.com.ph. The photo must creatively express your passion for the Ford Mustang. Deadline of submission is 12 midnight of April 19 (Sunday).

3. We'll select the 20 best photos and have other readers vote their favorites. The senders of the five most voted (or liked) photos by 12 midnight of April 21 (Tuesday), get to go to the Mustang party.

4. Should a winner be younger than 18, we will require that a parent or guardian go with him/her to the event.

5. We only ask that if you'll join, please be sure you're available to attend the event on April 23 (Thursday), 7pm, at the Bonifacio High Street Amphitheater.

6. The five readers and their companions should dress like rock stars.

Start taking photos, guys. We hope to party with you next week. 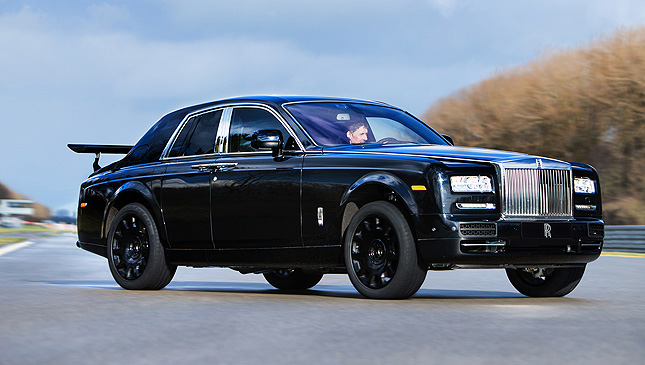 Test mule for Rolls-Royce's 'go-anywhere vehicle'
View other articles about:
Read the Story →
This article originally appeared on Topgear.com. Minor edits have been made by the TopGear.com.ph editors.
Share:
Retake this Poll
Quiz Results
Share:
Take this Quiz Again
TGP Rating:
/20