One of our childhood automotive icons
by Craig Jamieson | Dec 13, 2020
CAR BRANDS IN THIS ARTICLE

1) The Diablo was the first to bring back the SV name.

You’d think with 16 years of Countach updates and special editions, there’d be room somewhere to follow the precedent set down by the Miura’s bewitching swan song, the Super Veloce. But in all that time, there was never a Countach SV. Hey, it was the ’80s. People were...uh...going to the bathroom for very legitimate and legal reasons and coming out with itchy, runny noses for some reason.

So, it wasn’t the Rod Stewart-ready Countach that revived the hallowed SV badge, but rather its long-awaited successor, the Diablo.

For the Diablo, that meant a return to rear-wheel drive (unlike the AWD Diablo VT), a power bump from 485hp to 510hp, and the considerable likelihood that you’d end up arriving in someone’s front yard without prior invitation. To try to prevent such sojourns, the Diablo SV got bigger front brakes with extra cooling. But not, crucially, any ABS. 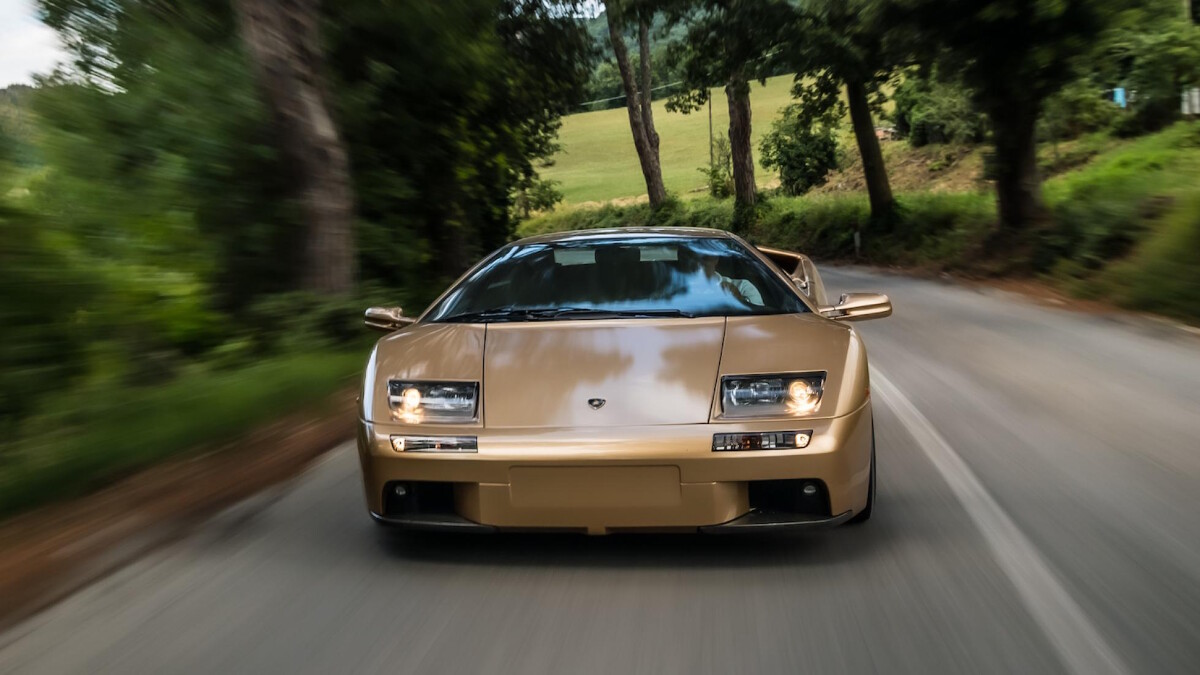 Is it just us, or does the Diablo seem entirely too recent for things like power steering and ABS to be omitted from the original article?

Right about now, one of you is thinking, “Ah, that makes it a proper sports car, only able to be tamed by a proper driver with proper skills,” before devolving into some variety of chauvinism. Can we just go ahead and correct both of those troublingly wrong trains of thought right here and right now?

Of course, there’s a romantic notion of being solely in control of the machine, unfettered and unbridled. That notion gets a lot less romantic when you’re juuuuust leaving the safety of the tarmac and beginning a surprising adventure into a ditch. There’s a very good reason Lambo went to all the trouble to fit an AWD system to the Diablo VT. In fact, there were 12 reasons, arranged in a V shape, offering somewhere around 485 really strong arguments as to why AWD traction was a fair idea. Why that fair idea about keeping traction when accelerating didn’t extend to keeping traction when braking is anyone’s guess, but that glaring omission wasn’t rectified until Audi took over. Choose whichever lazy ‘German sensibility’ trope you think best fits the occasion.

On a related note, if you’re in the market for a Diablo, perhaps consider a post-1999 model, ideally before you reach that downhill hairpin in the wet.

3) A rally driver helped set it up. 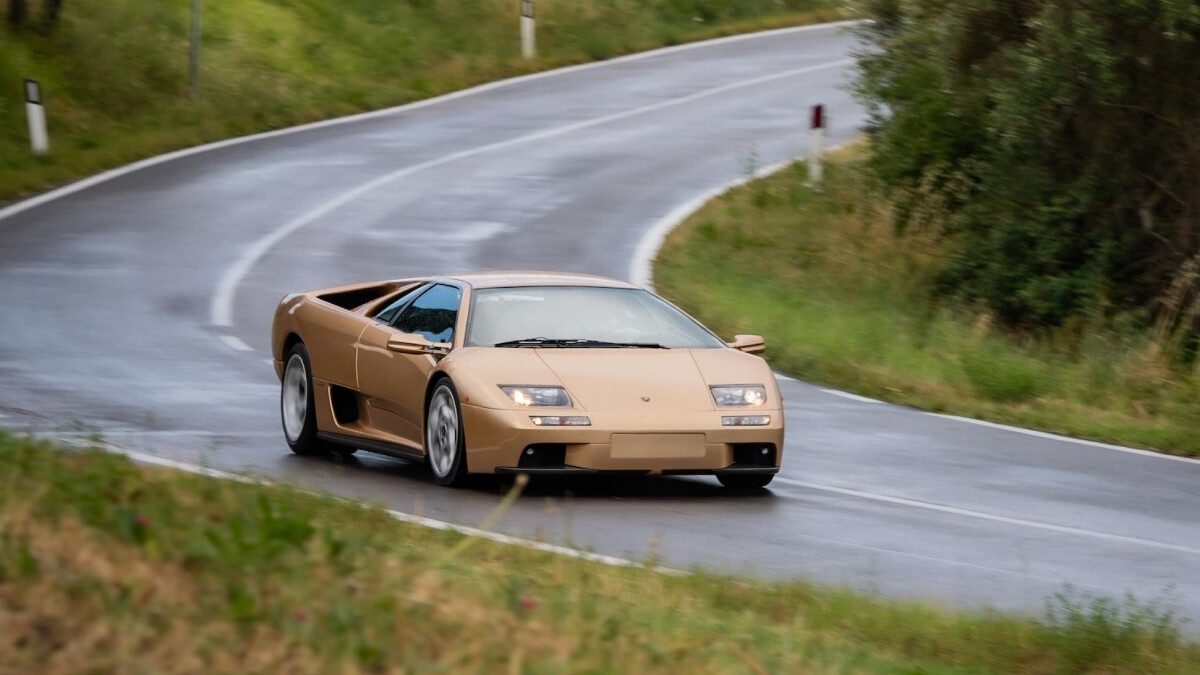 And not just any pretty decent rally driver, either—Sandro Munari, who claimed the 1977 World Rally Championship drivers’ title in a Lancia Stratos HF. Really, if we’d managed such a feat, we’d find a nice villa somewhere and spend the rest of our days resting on our considerable laurels. In fact, just getting paid to race Fulvia and Stratos HFs and 131 Abarths would do us just fine.

Instead, Munari lent his full-send-through-a-forest abilities to the development of the very machine that first made a certain future Top Gear writer sit up and pay very close attention to this whole ‘cars’ thing.

4) The engine cover shows the firing order for the V12. 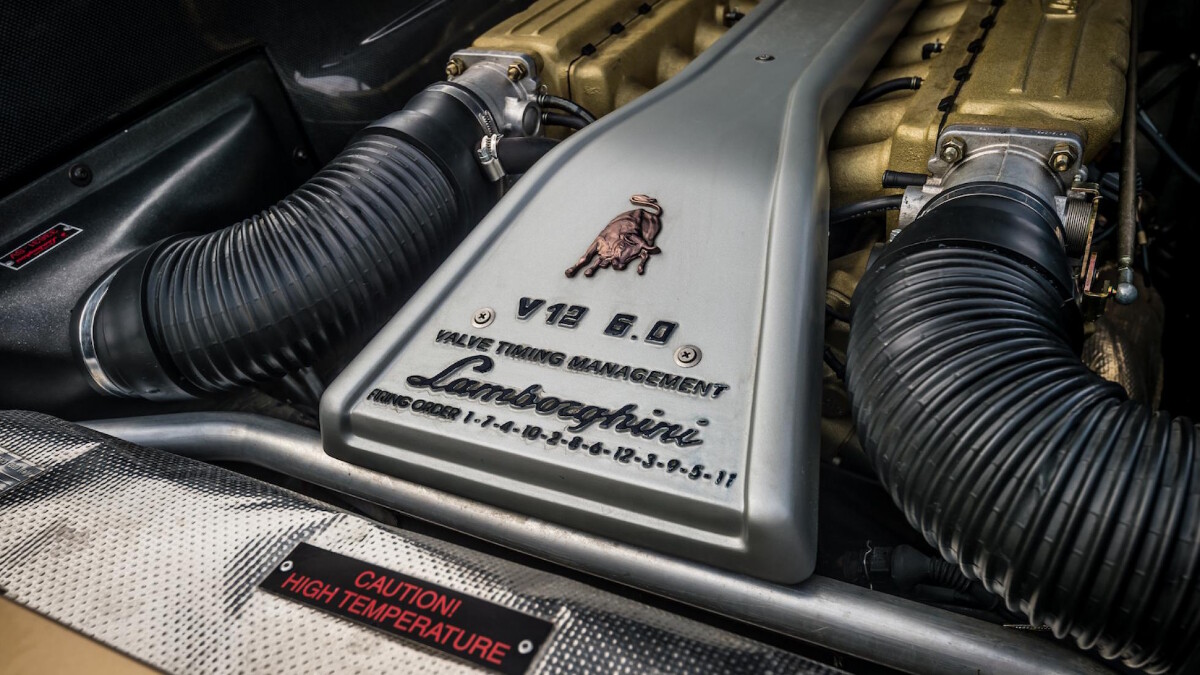 Because what you really want to do is use a mechanic who needs to be reminded of how the engine works?

Printing the firing order of an engine somewhere in the engine bay of a standard car has been around at least as long as the Volkswagen Beetle. And it’s a handy thing, especially back in the days of when DIY was a necessity and distributors went wrong once a month, just for the hell of it.

But displaying the firing order on Bizzarrini’s magnificent V12 really stumped us for a while, until the penny dropped: This is the best low-key flex in the business. Printing out the firing order for all 12 cylinders drives home the point of actually having 12 cylinders much better than any V12 badge could ever hope to.

5) It was the best car on the original Need for Speed. 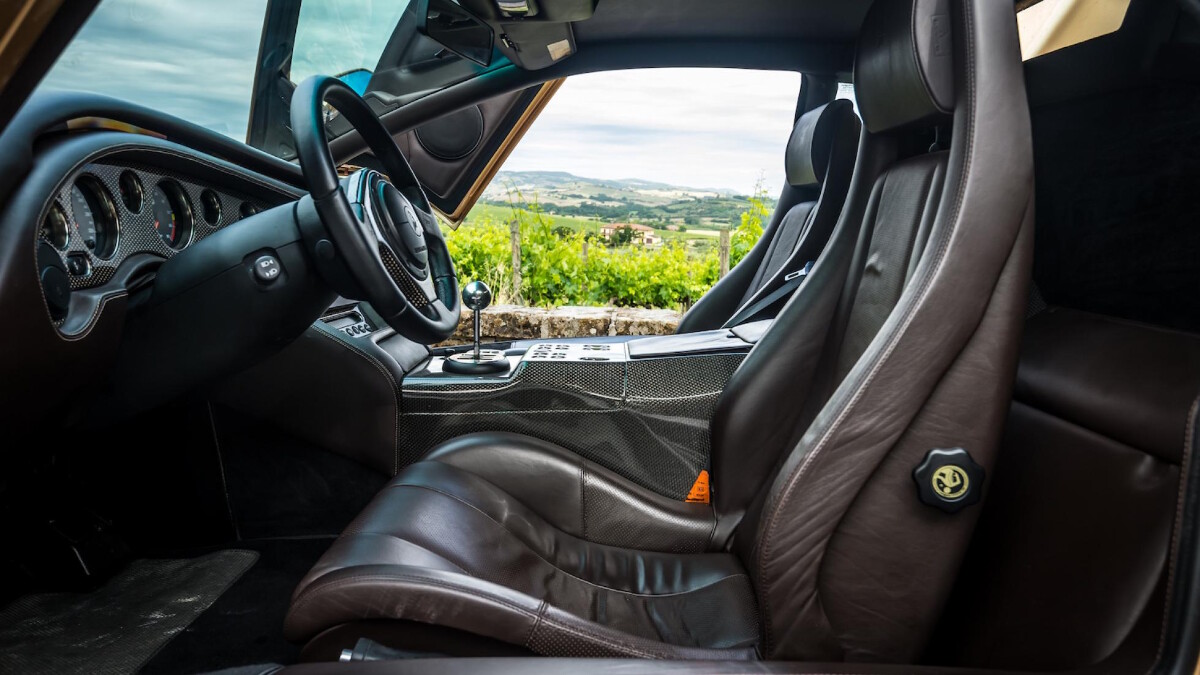 Okay, this is something of a personal one, and it might also be a very good way to ascertain the age of the people who write for this site, but when we first got our hands on Need for Speed, it was the jet-black Diablo VT that stole every last bit of our attention.

It’s worth remembering (or learning for the first time, if you’re of a younger generation) that this was a game from 1995, and therefore had the cream of the crop of cars—RX-7, Honda NSX, Supra Turbo, 993 Carrera, Corvette ZR-1, Dodge Viper, and Ferrari 512 TR—and the Diablo still reigned supreme. 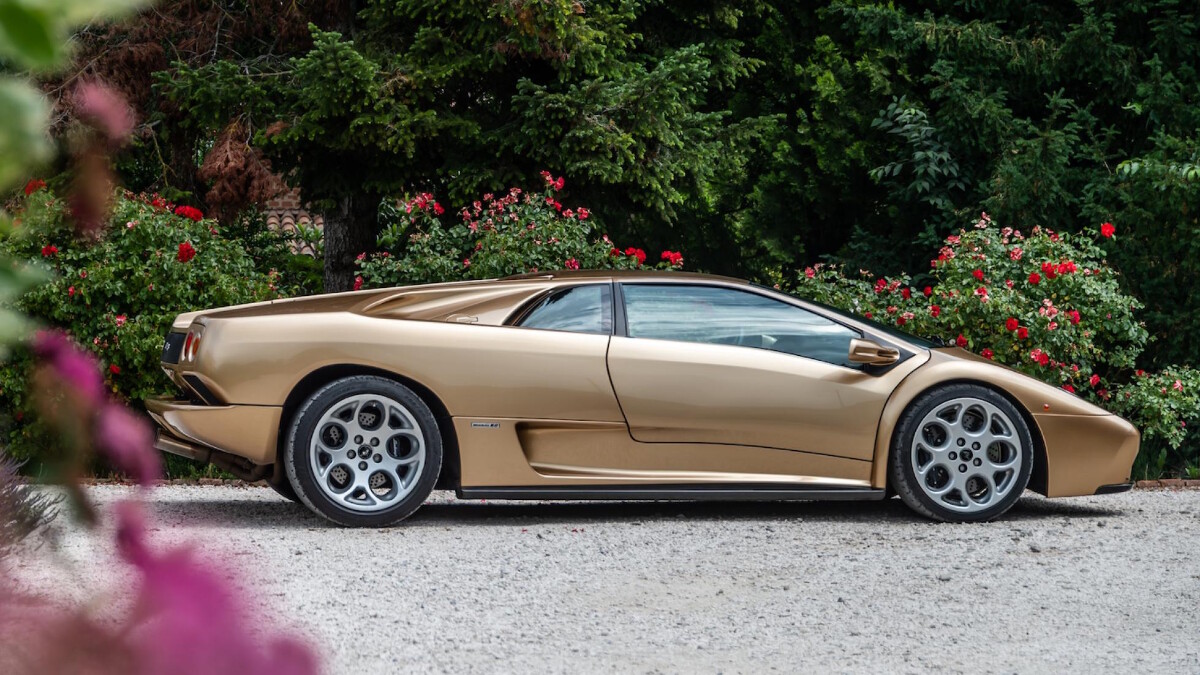 If you gaze at the right-hand flank of the Diablo, you’ll see the ‘Disegno Marcello Gandini’ plaque, placed ahead of the rear wheel. But that’s not the whole story. In fact, Gandini’s original design was pretty much what you see in the Cizeta V16T, all side strakes and slats. When Chrysler took over Lamborghini back in the late ’80s, Tom Gale at Chrysler design smoothed out and sculpted the Diablo into the shape you remember from your childhood.

Later on, Audi took over Lamborghini and Luc Donckerwolke restyled it again, but it’s the Gandini-Gale shape that sticks with us. And, at the risk of committing gearhead heresy, we actually prefer the Gale-tweaked design. Good thing hate mail isn’t really a thing anymore, right?

7) There was an optional dashboard clock by Breguet... 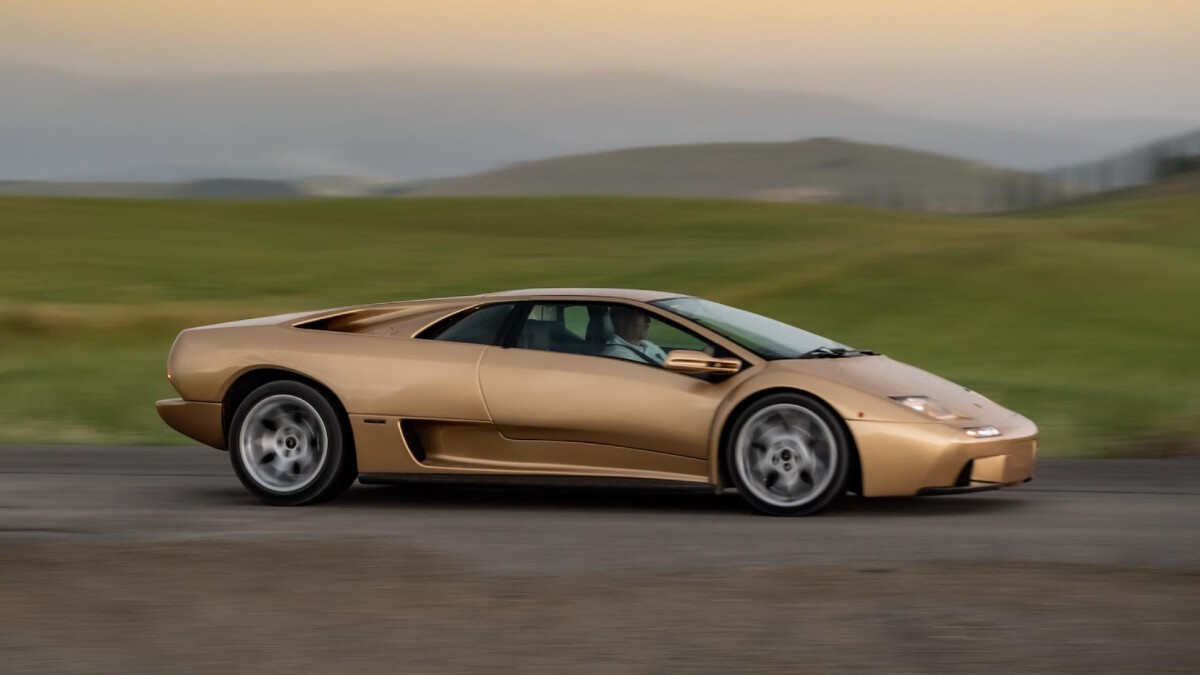 ...and it didn’t half look out of place. Seriously, imagine the old-timiest looking timepiece this side of your grandfather’s actual grandfather clock, and you’re about there. It was about a 10-grand option back when the Diablo was new, and only about 50 buyers were willing to cough for it, apparently.

It’s such a rare fish that pictures of the clock itself don’t even reside in Lamborghini’s current trove of Diablo images. Oh, and being a proper mechanical timepiece from the land of haute horlogerie, the Diablo’s dash clock was manual-wind only.

8) The AWD system in the Diablo VT came from the infamous LM002. 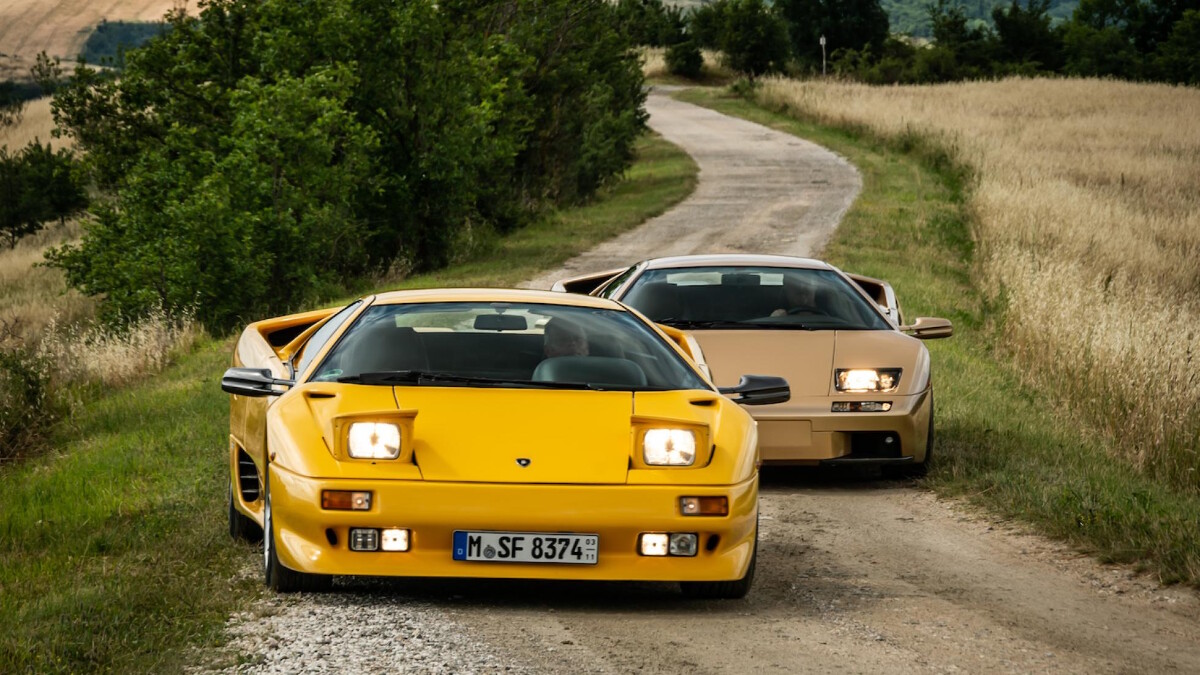 The LM002 is something you love, even though you know you really shouldn’t. The rational part of your brain reels from its intended purpose as a military vehicle and subsequent segue into ultra-luxe totem of conspicuous consumption. And while we’re talking about just how conspicuous that consumption is, the LM002 came with a 140-liter fuel tank to try to keep fuel up to the Countach-sourced V12—or a 7.2-liter V12 from a powerboat, which was an option for the prospective LM002 buyer.

On the other hand, the LM002 donated its all-wheel-drive system to the Diablo VT (Viscous Traction), which, as the name suggests, used a viscous coupling to send up to 25% of the power to the front wheels as needed. Of course, the system was much modified in its journey from thuggish off-roader to incredibly timeless V12-powered wedge, but let’s not overlook the fact that when you look for traction in a VT, LM002 running gear ensures you will absolutely find it.

9) The limited-edition SE30 used in the ‘Cosmic Girl’ video didn’t have a windshield. 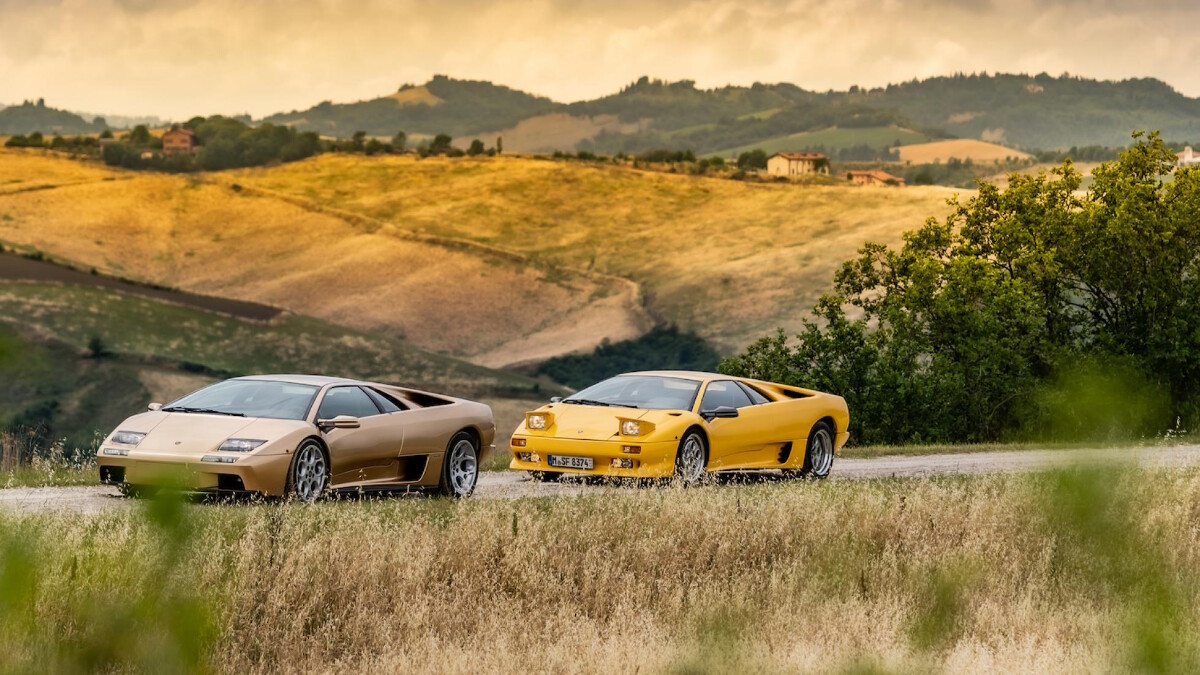 This one’s for those old enough to remember when you couldn’t come within earshot of a radio without hearing something from Jay Kay. Not a complaint, just an observation. Maybe it was the circles we ran in back then, but if we had gone more than 20 minutes without something from Jamiroquai, Fatboy Slim, or The Chemical Brothers popping up on the radio, we would have immediately assumed that the world had ended and we’re just waiting for the end to come.

Let’s move on from that distressingly dark analogy and back a little bit closer to the point. When Jay Kay decided to make a clip for his ’90s ear worm, ‘Cosmic Girl,’ he sent his special-edition Diablo down to Spain to thrash it around with Nick Mason’s Ferrari F40 and a 355 GTS. Or rather, he planned to.

His ultra-rare Diablo was all set to get on a truck to head down to Spain, and, as Jay Kay related in an interview years later, “The guy moving crashed it.” And it wasn’t a little bump, either; if you’re feeling brave, check out photos of the aftermath. It’s enough to make you sweat and weep simultaneously.

The Diablo in question was, in fact, an SE30, a lightweight special that celebrated, rather neatly, the 30th anniversary of Lamborghini itself. Which is, as you’d expect, something of a rare fish. Miraculously (as so often happens when one is minted), Jay Kay found another SE30, in the same amazing metallic purple, and managed to get it down to Spain, giving strict instructions that no one should drive it until he got there. Which must have been lost in translation.

When he turned up, the second SE30 had no windshield and the production crew had lost the ability to look him in the eye. So, when you watch the ‘Cosmic Girl’ film clip back, you’ll notice that Jay’s hair is flapping about in the kind of breeze one encounters when you go without a windshield.

10) When it went off-sale in 2001, the Diablo was the best-selling Lamborghini ever. 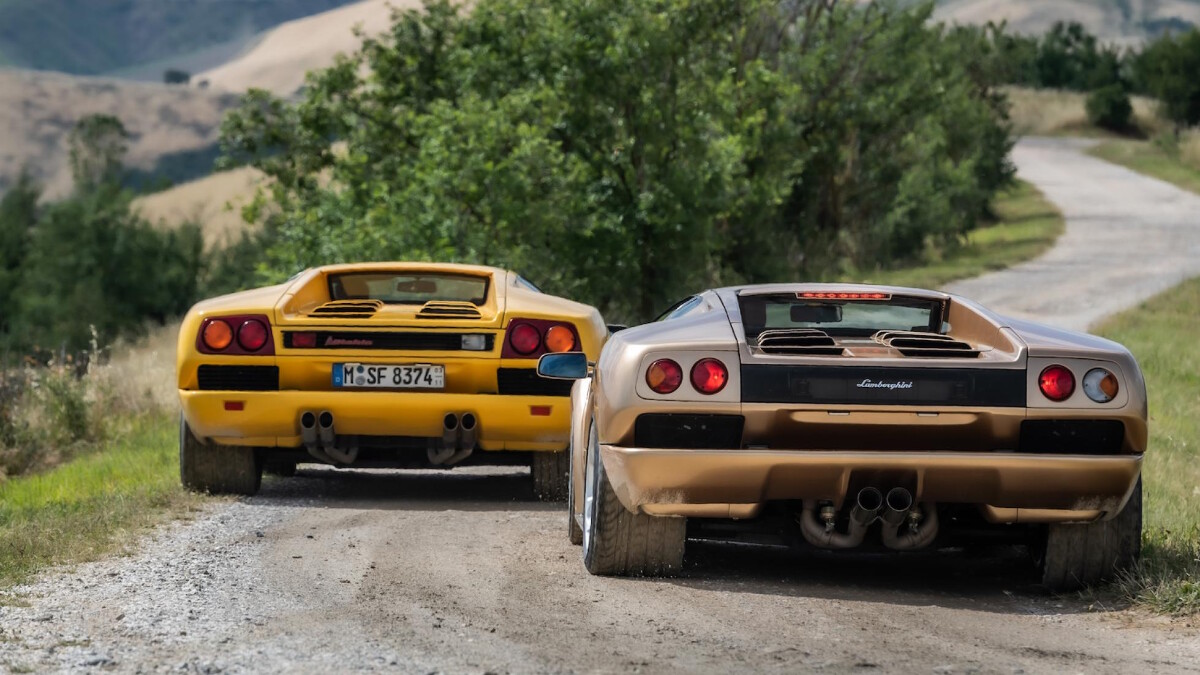 Which is obviously not a record that stood for a particularly long time, given that its run of 2,900 cars was immediately usurped by the Murcielago that replaced it, and then blown out of the water by the Gallardo, then the Huracan, then the Urus, which sold 10,000 in just two years, as opposed to the Diablo’s 11 years on sale. Weep tears of varying bitterness as you see fit.

But the point we’re in danger of not making is this: The Diablo was a car from a deeply troubled company that bounced around between owners from America to Indonesia and Germany. It was the product of many fathers and had to hold its own, on its own, for a decade. And yet it managed to do more than hold the fort—it outsold every Lamborghini that came before it. Also, and this feels like something that’s beside the point but still worth mentioning, it’s just the flipping coolest thing ever. 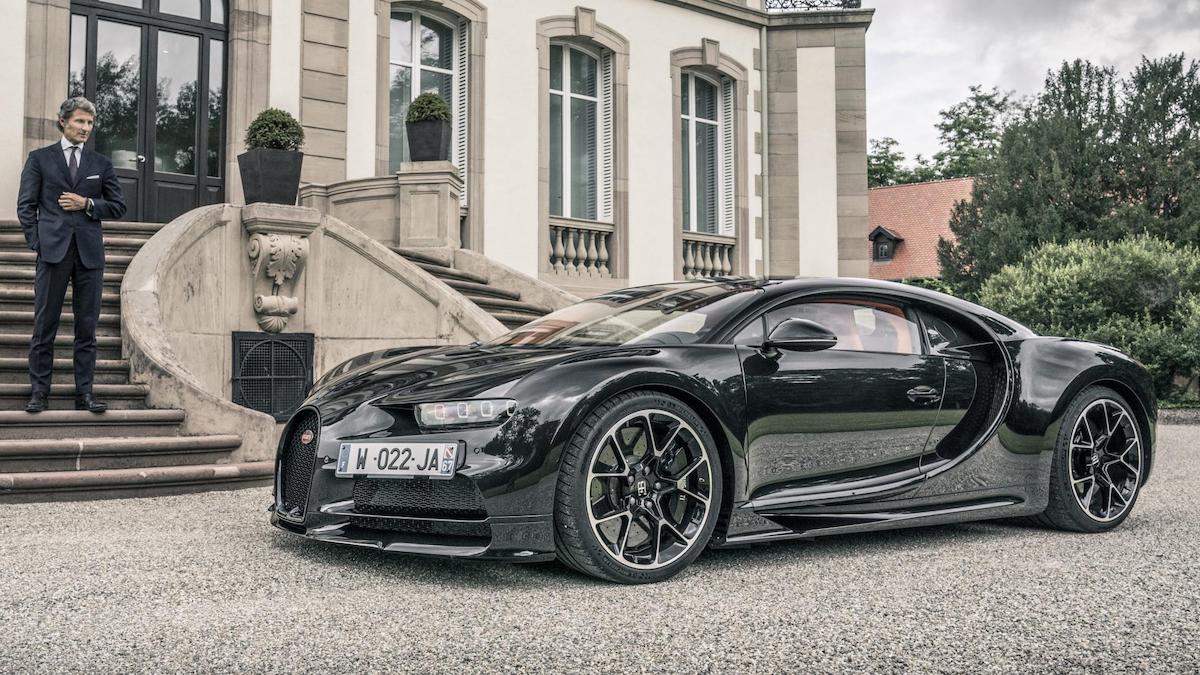 Stephan Winkelmann on Lamborghini and Bugatti’s future in the age of EVs
View other articles about:
Read the Story →
This article originally appeared on Topgear.com. Minor edits have been made by the TopGear.com.ph editors.
Share:
Retake this Poll
Quiz Results
Share:
Take this Quiz Again
TGP Rating:
/20