“Motorists—especially those headed north—are now feeling the effects of the latest lane closures and new traffic schemes that have been implemented along the South Luzon Expressway (SLEX) to give way to the ongoing Skyway Extension Project.

“The saga began with the carmageddon in September, which resulted from the closure of one northbound lane near the Alabang viaduct. Fast-forward to the start of December, and the heavy traffic started to ease up thanks to the reopening of the closed lanes and the opening of a steel ramp made accessible to motorists headed to the Skyway.

“The situation started to normalize after that, but things once again turned sideways when Skyway O&M Corporation (SOMCO) announced further lane closures in January—this time on the southbound side of the tollway—effective February 16, 2020, to make way for further roadworks.”

“The Department of Public Works and Highways (DPWH) will be conducting road reblocking and repair works along portions of Roxas Boulevard over the next 180 calendar days. According to the agency, it received clearance to push through from the Metropolitan Manila Development Authority (MMDA) and began works on February 28, 2020.

“‘Tonight, we will begin repair along portions of the outermost northbound lanes of Roxas Boulevard, starting at the 50 meters from EDSA in Pasay side, and another 50 meters from P. Ocampo Street in Manila side,’ DPWH South Manila district engineer Mikunug Macud said on February 28.

“The DPWH added that the 530-meter portion from EDSA to before Libertad has received an allocation of P20 million, while the 500-meter section from Ocampo Street to before Quirino Avenue received P40 million. All of this will go towards drainage improvements, traffic management, and road concreting.”

The MMDA has announced that it is looking to suspend public utility vehicle (PUV) drivers who have committed multiple traffic violations, after the Land Transportation Office (LTO) submitted the names of such motorists.

“MMDA general manager Jojo Garcia says the move comes in a bid to keep commuters safe: ‘We want the riding public to be out of danger, and prohibiting habitual traffic offenders is one step to avoid road accidents.’

“According to the MMDA, only half of the 2,500 drivers issued LTO show cause orders answered, and that the agency submitted a list of drivers with multiple apprehensions in January. Garcia added that the MMDA is just waiting for apprehension guidelines from the LTO, and clarified that the agency is targeting private motorists with more than three violations for the same offense, too.

“Emmanuel Tabuena, traffic enforcement chief of the Philippine National Police–Highway Patrol Group (PNP-HPG), said these motorists might not just face a revocation of license or suspension—those involved in accidents may be charged with reckless driving as well.”

“Starting Monday, March 9, 2020, the MMDA will be deploying more personnel to aid in apprehending suspended drivers that recklessly continue to operate PUVs around the city.

“According to a CNN Philippines report, the LTO claims that around 2,000 drivers have already been suspended since November 2019—these are the people who have incurred three or more infractions in a year. The agency says that those who continue to drive despite their suspensions may have their licenses revoked.

“In our previous story, Land Transportation Franchising and Regulatory Board (LTFRB) technical division chief Joel Bolano said that the removal of the suspended drivers from the road won’t result in adverse effects on the transport system as a whole: ‘If there are 3,500 bus units in Metro Manila, there are more than 7,000 [public utility bus] drivers. If there are only 2,000 delinquent bus drivers, there will still be 5,000 left.’

“However, MMDA traffic chief Bong Nebrija has now said that the 2,000 suspended drivers constitute 30% of the PUV drivers in Metro Manila, and stressed that this move may greatly affect commuters. In light of this, he has advised the public to ‘adjust their time’ since fewer PUVs are expected to ply the city streets beginning Monday.

“‘Make it early so that if ever you will be affected by this, there’s ample time for you to recover para hindi kayo ma-late. You have to find alternative transportation to your office,’ Nebrija said.”

“The LTO is currently cooking up a centralized digital system that will incorporate all of the agency’s services. According to an Inquirer.net report, the LTO said that the new web-based system is expected to be launched by the second quarter of 2020. Through this new online digital system, clients can complete transactions, or set an appointment for driver’s license application or renewal at any district office.

“To get a new driver’s license, applicants must first go to their respective LTO offices to register their fingerprints and face IDs. For license renewals, applicants may complete their transactions online, then simply drop by their selected district office and use their biometrics data to claim their licenses. The LTO said that an online examination must also be accomplished in determining the respective driver’s license restriction codes, but the report does not specify if this applies to both new and existing applicants.

“This system was adopted from a German tech company, and is expected to reduce long lines at LTO offices as well as cater to overseas Filipino workers. Once rolled out, it will include the automation of the agency’s Motor Vehicle Inspection Registration System (MVIRS) and the Law Enforcement and Traffic Adjudication System (LETAS).”

LTO driver’s license examination will be translated to different languages

“The Department of Transportation has announced that it has directed the LTO to make the driver’s license exam available in languages other than English and Filipino. According to DOTr head Arthur Tugade, the move is to put into consideration those in Visayas and Mindanao.

“In the interest of justice and for the effective enforcement of land transportation laws, the DOTr recognizes the need to afford examinees the opportunity to fully comprehend the driver’s license examination,” Tugade said.

“The written examination for a driver’s license should not be limited to two languages—English and Filipino. What if they will conduct the test in Visayas and in Mindanao, and those poor countrymen of mine cannot understand Tagalog and cannot fully understand English?”

“LTO assistant secretary Edgar Galvante says the agency is already working on its exam’s translations: ‘We have already created a team for each of the major dialects. The assigned team will translate the driver’s license examination. The translation will be checked by experts of the language to ensure that the terms are accurate and official.’”

The ‘EVs and Charging Station Act’ has been filed in Senate

“Senator Win Gatchalian, one of the listed authors of the ‘Electric Vehicles and Charging Station Act’ and chair of the Senate Energy Committee, says that the proposed measure may help reduce oil consumption in the Philippines by as much as 146.56 million barrels per year, if implemented correctly. This will result in P490 billion in annual savings.

“Under Senate Bill No. 1382, a Comprehensive Roadmap for Electric Vehicles (CREV) will be developed through the Department of Energy (DOE). This will help speed up the electrification of transport in the country focusing on four core aspects, namely: electric vehicles and charging stations, manufacturing, research and development, and human resource development. The agency will also be the one tasked to update the CREV every year.

“The bill will also require private and public buildings and establishments to designate parking slots with charging stations, as well as gasoline stations to have a dedicated charging area. You may recall these same provisions were included in the initial bill that Gatchalian filed last year.

“In addition, corporate and government entities will be mandated to have EVs in their fleets. To be exact, these EVs should amount to 5% of the total fleet—this should be accomplished within the timeframe indicated in the CREV.

“The Department of Trade and Industry (DTI) will also be required to create and implement an incentive EV strategy as part of the CREV, and it will aim to enable the shift of the local automotive industry to EVs as well as to set local production targets that should be achieved within seven years of implementation of the said strategy.

“There are also a number of fiscal and non-fiscal incentives included in the bill, including the nine-year tax exemption (excise, duties, and value-added) for the ‘importation of completely built units of EVs and charging stations.’ If you want to see the entire document for yourself, click here.”

“Senator Richard Gordon, the principal author of the Motorcycle Crime Prevention Act, is once again pushing for the ‘doble plaka’ law’s immediate implementation, citing the rising riding-in-tandem cases this year. He says there have been 64 cases from January 1 to March 4, 2020, including the recent incident involving actress Kim Chiu, whose van was recently ambushed on Katipunan Avenue in Quezon City.

“Gordon is now calling upon the LTO to establish the law’s implementing rules and regulations as soon as possible. He reiterates how this law will be a proactive measure against the aforementioned crimes.

“The ‘doble plaka’ law, as its name suggests, will require all motorcycles registered under the LTO to have license plates both in front and at the back of the vehicle. This has been opposed not only by several rider groups, but also by some lawmakers themselves.” 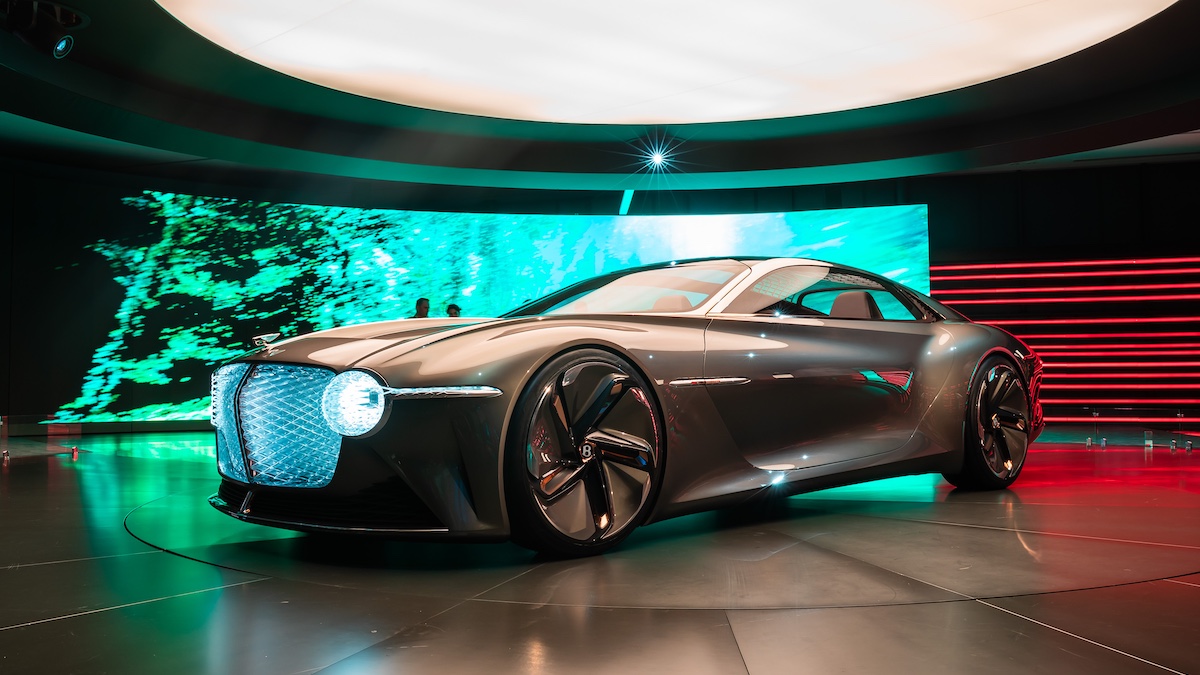 Fully-electric Bentleys will arrive in the mid-2020s
View other articles about:
Read the Story →
This article originally appeared on Topgear.com. Minor edits have been made by the TopGear.com.ph editors.
Share:
Retake this Poll
Quiz Results
Share:
Take this Quiz Again
TGP Rating:
/20