What do you think about these new developments?
by TopGear.com.ph | Sep 13, 2020

Floods? No problem for the Metro Manila Subway, says DOTr

“The Metro Manila Subway is one of the government’s biggest projects that we think motorists and commuters alike are looking forward to, as it’s surely something that could do wonders for our road congestion and mass-transport system in the metro. There is, however, one equally big concern with this subway: floods.

“In response to these concerns, the Department of Transportation (DOTr) has assured the public that the subway will be flood-proof. Agency secretary Arthur Tugade said in a recent statement that JIM Technology Corporation (JIMT), one of the Japanese contractors involved in the project, is experienced in building subways in flood-prone areas. In fact, Tugade said that JIMT has constructed subways in more difficult areas where the train line’s tunnels were already below sea level.

“‘The technology of our Japanese construction partners is the assurance; their experience is the assurance. The perennial flooding has been considered very strongly in formulating the details of the first Manila subway station,’ Tugade said. ‘The subways in Japan are never flooded and they are using that technology. And that is the same technology we are using.’

“The DOTr’s statements were made during the virtual briefing in which the agency unveiled its new tunnel boring machine (TBM). These 700-ton TBMs measuring 95 meters long and 6.99 meters in diameter will be used to lay down 12 meters of tunnel segments per day.

“The subway is expected to be partially operational by December 2021 and be completed by 2024 or 2025. Once complete, the 34km line with 17 stations will eventually connect the cities of Valenzuela and Taguig, and is expected to ferry up to 1.5 million passengers daily.”

Around 1,000 more jeepneys were reactivated in Metro Manila the past week

“The Land Transportation Franchising and Regulatory Board (LTFRB) has authorized the operation of 1,006 public utility jeepneys (PUJ) on 10 additional routes in Metro Manila. Through Memorandum Circular 2020-043, the following trips have been available since September 9:

“The PUJs will be required to display a QR code and have a valid Personal Passenger Insurance Policy. Both drivers and passengers have to follow the COVID-19 protocols laid out by the Inter-Agency Task Force for the Management (IATF) of Emerging Infectious Diseases.”

“In a recent hearing by the House Committee on Transportation, it was decided that two House Bills (HBs) that seek to protect law-abiding drivers from unfair rulings during road incidents will be consolidated.

“During the hearing, the House Committee decided to form a technical working group to lead the consolidation of the two bills. There were no specific timelines laid out yet, but we can all agree that these are welcome developments towards establishing fair accountability for road accidents.”

“Six burly new Toyota Hilux units were recently donated to the Manila City government by the Federation of Filipino-Chinese Chamber of Commerce and Indusry (FFCCCII), and residents will soon see them supporting law enforcement units on the ground. These aren’t just regular pickup trucks, however, as they’ve all been modified by Overland Kings and DAWG Outfitters to serve a specific purpose: fighting crime.

“Each donated Hilux comes equipped with steel bumpers and rock sliders, auxiliary lights, a snorkel, a 12,000lb remote-controlled winch, a PA system, and even breaching ladders. First-aid kits, fire extinguishers, and high lift jacks are also included in the package, and the pickups run on nice-looking 17-inch Black Rhino wheels, too.

“According to the FFCCCII, this is the organization’s way of supporting the city’s fight against crime.”

“EDSA has been a hell of a lot quieter in terms of road mishaps over the past few months. This observation becomes even more obvious when you compare Metropolitan Manila Development Authority (MMDA) statistics in 2020 to last year’s figures.

“The MMDA recently released EDSA road crash data from June 1 to September 6, 2020, and it shows a significant drop in accidents compared to around the same period in 2019. The total number of accidents, both fatal and non-fatal, add up to around 618 this year—a massive ‘improvement’ when compared with last year’s 4,652 accidents from June 1 to August 31, 2019.

“Now, we say ‘improvement’ because we all know the reason for the massive dip in accidents along EDSA: the COVID-19 pandemic. Still, fewer road mishaps is always a good thing, and the massive drop in crashes happened even with Metro Manila’s shift back to general community quarantine in June. It’s important to note, though, that the period recorded includes a two-week return to a stricter modified enhanced community quarantine.

“June was the most dangerous month on EDSA during the period mentioned above, with 324 total accidents. And the most accident-prone cities were Quezon City, Mandaluyong City, and Makati City, with 312, 115, and 97 accidents, respectively. Those rankings are the same as last year’s, when 2,131, 983, and 928 accidents were recorded in each city.”

...most of which were due to driving under the influence

“Random checkpoints will soon pop up to catch drunk drivers in order to prevent road accidents that still happen despite the COVID-19 quarantine, most of them due to driving under the influence, the MMDA has announced.

“Since July 1, for instance, the MMDA recorded 100 collisions between private vehicles and concrete barriers on the the new EDSA Busway, says Arturo Garcia, the agency’s general manager.

“The blood alcohol levels of motorists will be checked in the random checkpoints, which will most likely be set up during curfew hours, Garcia adds. A curfew of 8pm to 5am is prescribed, but some cities have adjusted the start time to 10pm, so better check with local authorities.

Want to give drive-in cinemas a try? Here’s what it looks like

“SM Cinemas has been pretty busy trying the bring life to the country’s movie scene the past few months.  In late July, it converted SM Pampanga’s parking lot into a drive-in movie theater. Then, about a week ago, it began selling tickets online for a similar setup located at SM Mall of Asia’s Event Grounds.

“If you’re curious as to what the modern drive-in movie theater looks like, SM Cinemas has released images of its SM Mall of Asia setup (which the company has dubbed ‘Movies by the Bay’) on social media.

“A couple of dozen vehicles, plenty of space, drinks, and food included with each P400 ticket…not a bad way to go about watching films during a pandemic, if you ask us. There are a few drawbacks here that have to be brought up, though. One is that you’ll have added fuel expenses and emissions if you plan on keeping you’re A/C system on while you’re watching a movie, and another is that—unless you’re driving a convertible (which we highly doubt)—passengers in the back will have a less-than-stellar viewing experience.

“Currently, the movies being screened are Train to Busan: Peninsula and the Russell Crow thriller Unhinged. You can check out our previous story for the full screening schedule.”

“The DOTr has announced that the Inter-Agency Task Force (IATF) for the Management of Emerging Infectious Diseases has approved plans to begin scaling back social-distancing measures onboard public transport. This covers buses and other public utility vehicles (PUV), as well as the MRT-3, the LRT-1, the LRT-2, and the PNR. The move comes in a bid to cater to more commuters, as more and more businesses are expected to reopen.

“The ‘optimization’ of physical distancing will begin on September 14, 2020. The required distance between passengers will be reduced to 0.75 meters from the recommended one meter. The distance will be further reduced to 0.5 meters two weeks later, and to just 0.3 meters after another two weeks. Standing passengers, meanwhile, will be allowed on board modern PUVs.

“The wearing of face masks and face shields will still be required, while taking calls and talking onboard public transport is still prohibited. Check out the adjusted maximum passenger capacities for train lines:

“‘There is a need to safely optimize the carrying capacity of the various public transport modes as Metro Manila and its adjacent areas continue with the transition towards the new normal where more workers are expected to return to their reopened workplaces and more businesses are expected to resume operations that were stopped during the enforcement of strict quarantine measures,’ DOTr head Arthur Tugade said in a statement.” 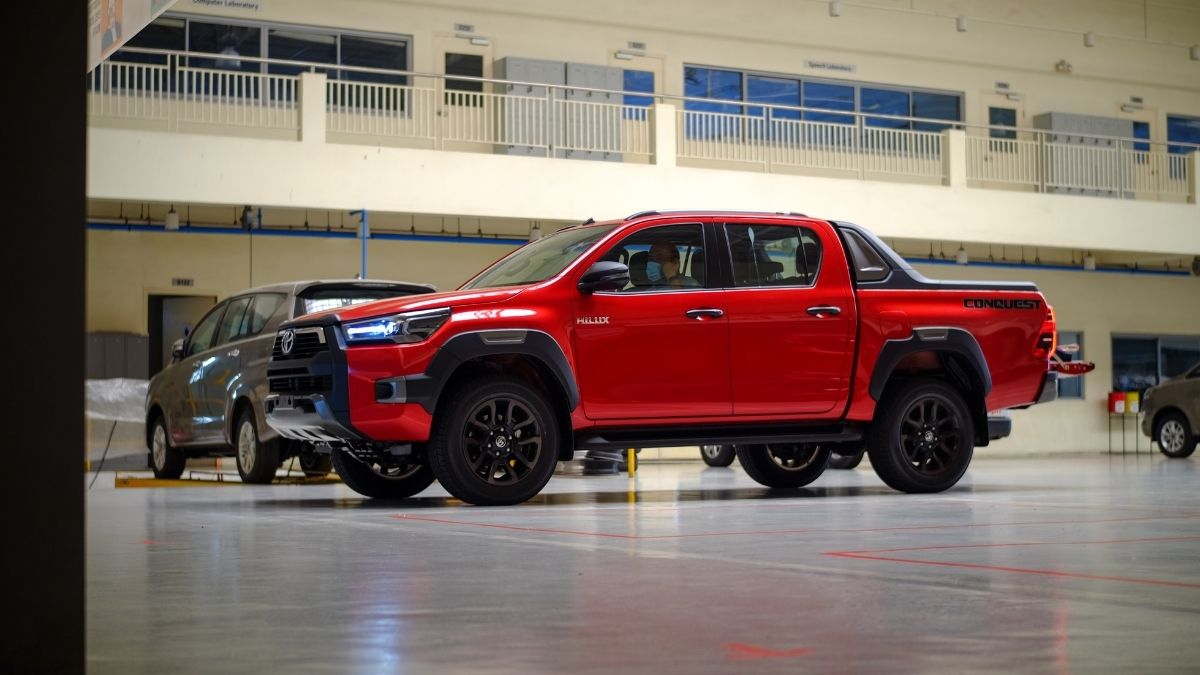 Specs, variants, prices: Everything you need to know about the new Toyota Hilux
View other articles about:
Read the Story →
This article originally appeared on Topgear.com. Minor edits have been made by the TopGear.com.ph editors.
Share:
Retake this Poll
Quiz Results
Share:
Take this Quiz Again
TGP Rating:
/20