Plus other important news stories from the past week
by TopGear.com.ph | Jan 12, 2020

The back-and-forth between Angkas and the DOTr continues...

“In a strongly worded statement published on social media, the DOTr labeled the LCSP’s allegations as ‘baseless and reckless imputations,’ saying the TWG will not be deterred by ‘threats of lawsuits and charges of corruption.’

“The DOTr went so far as to imply that the LCSP is not acting independently from any motorcycle-taxi company, as the group claims.

“Finally, the DOTr also questioned Angkas’s ownership. According to the agency, the motorcycle-taxi company is, in fact, a 99% foreign-owned corporation, and did not disclose this to the public.”

...and Angkas seems to gain a small victory...

“The Mandaluyong City Regional Trial Court (RTC) has issued a 72-hour temporary restraining order (TRO) on the 10,000-rider cap in Metro Manila for riders from each of the three companies participating in motorcycle-taxi pilot run as imposed by the TWG of the DOTr.

“‘A 72-hour Temporary Restraining Order is hereby issued upon posting of a bond in the amount of P300,000 enjoining the respondents and/or any other person/s acting for or on their behalf, from implementing the Revised General Guidelines for Pilot Implementation of Motorcycle Taxis insofar as it puts a cap on the number of bikers that Angkas is entitled to and from performing any act that limits and impairs their rights to deal with and continue with their contracts with Angkas,’ the order stated.

“‘Under the Revised Guidelines, which is set to take effect on January 6, 2020, 17,000 Angkas riders are poised to lose their jobs. Thus, the petitioners stand to suffer the consequences of LTFRB’s arbitrary and unilaterally crafted guidelines,’ the court said.”

...but the LTFRB issues a blacklist warning...

“‘It appears they are challenging the government,’ said the visibly irked Engr. Alberto Suansing, DOTr road sector consultant, referring to the series of mass actions recently staged by Angkas.

“Suansing explained that while Angkas cannot be excluded from the ongoing pilot run despite its numerous violations, the company will be made to suffer the consequences of its actions when the inter-agency TWG submits its findings and recommendations, which will be the basis of a law that will legitimize the motorcycles-for-hire. The Land Transportation Franchising and Regulatory Board added that on these grounds, it can also recommend to Congress that Angkas be blacklisted from the roster of ride-hailing services eligible to be granted a motorcycle-taxi franchise in the future.”

...and Angkas issues an apology

“A day after officials of the TWG of the DOTr issued a warning against the company for its alleged bullying tactics, Angkas chief transport advocate George Royeca himself apologized to the inter-agency body, particularly to the LTFRB.

“‘I am sorry if this has gone up to a different level, causing inconvenience to the LTFRB. We are just passionate about helping the people,’ Royeca said, referring to Angkas’s riders.

“Royeca even came up with a detailed report on its operations, including biker statistics, pilot-run records, and details on its 24-hour emergency medical response and accident medical network.

“‘We will do whatever it takes for the [pilot] program to succeed,’ Royeca stressed.”

In other Angkas-related news, heavy passengers may be denied a ride

“Angkas recently updated its app to add several safety features and improvements, among which is the weight safety check, which requires you to specify your weight range upon registration. The check is included in the government guidelines on motorcycle safety.

There’s a potential new player in the motorcycle-taxi arena...

“Grab has officially expressed its intent to revive its own motorcycle-taxi service GrabBike, which, if you’ll recall, was previously in operation before it was discontinued to comply with government regulations back in 2016. Now, the country’s largest ride-hailing player wants to re-enter the arena.

“‘In light of the recent conversations around motorcycle taxis in the Philippines, Grab would like to reiterate its interest in participating in the motorcycle-taxi space to help provide affordable and agile transport solutions to hundreds of thousands of Filipino commuters,’ Grab said in a statement.”

Two days after the announcement, the company urged other motorcycle-taxi players to play nice amid the government’s controversial pilot run, saying that “any unnecessary trial by publicity and government defiance will only cause anxiety and inconvenience to the public and a negative cumulative effect on the entire ride-hailing sector.”

...and it’s already testing its app

“On January 9, Grab Philippines head Brian Cu posted on Facebook some screen captures showing the availability of GrabBike on the local Grab app. The option was listed as ‘Grab-Bike TEST,’ and according to Cu, the service accidentally turned on to Philippine Grab users.

“‘People have been asking me about when GrabBike will come out again...ayan it’s out na! But syempre no drivers yet because we are waiting to apply for the pilot,” Cu wrote.

“‘We just got a bit excited and started testing the system to make sure it will be safe and convenient for riders and passengers. And we accidentally turned it on for everyone.’

“If you’ve heard about Metropolitan Manila Development Authority (MMDA) enforcers apprehending and penalizing motorists for supposedly violating the restriction code indicated in their driver’s licenses, take note: The agency is not authorized to do so.

“As we have done so multiple times in the past, we turned to YouTuber dmitrivalencia to see the current roadwork at Skyway Stage 3 from a drone’s point of view. Here, you’ll see a lot of progress in the first few sections of the tollway. He also uploaded a detailed breakdown on his official Facebook page.”

Baguio City is planning to implement a ‘no garage, no franchise’ policy for PUVs

“According to a report by GMA News Online, the local government of Baguio City is planning to combat the growing issue of traffic by pouring money into infrastructure. Mayor Benjamin Magalong said projects being eyed include three integrated transport terminals, road-widening works, and the construction of more than P200 million worth of sidewalks.

NAIAX has a very public way of warning speed-limit violators

“To remind motorists that they’re being monitored as well as to make them aware of their actual speed, NAIA Expressway (NAIAX) has installed displays that show drivers how fast they’re going. These displays are placed above each lane and show each passing vehicle’s speed in kilometers per hour.

The government allots P330-M for the procurement of speed guns, breathalyzers

“According to a report by The Philippine Star, President Rodrigo Duterte has approved a P330-million procurement of radar speed guns, breathalyzers to use against drunk drivers, weighing instruments to detect overloaded vehicles, and other traffic enforcement tools.

“‘Right away the President approved it. He is that concerned,” Philippine National Police (PNP) officer-in-charge Lieutenant General Archie Francisco Gamboa reportedly said during an interview with DZMM.

“The official added that President Duterte expressed worry over the number of road accidents leading to fatalities.” 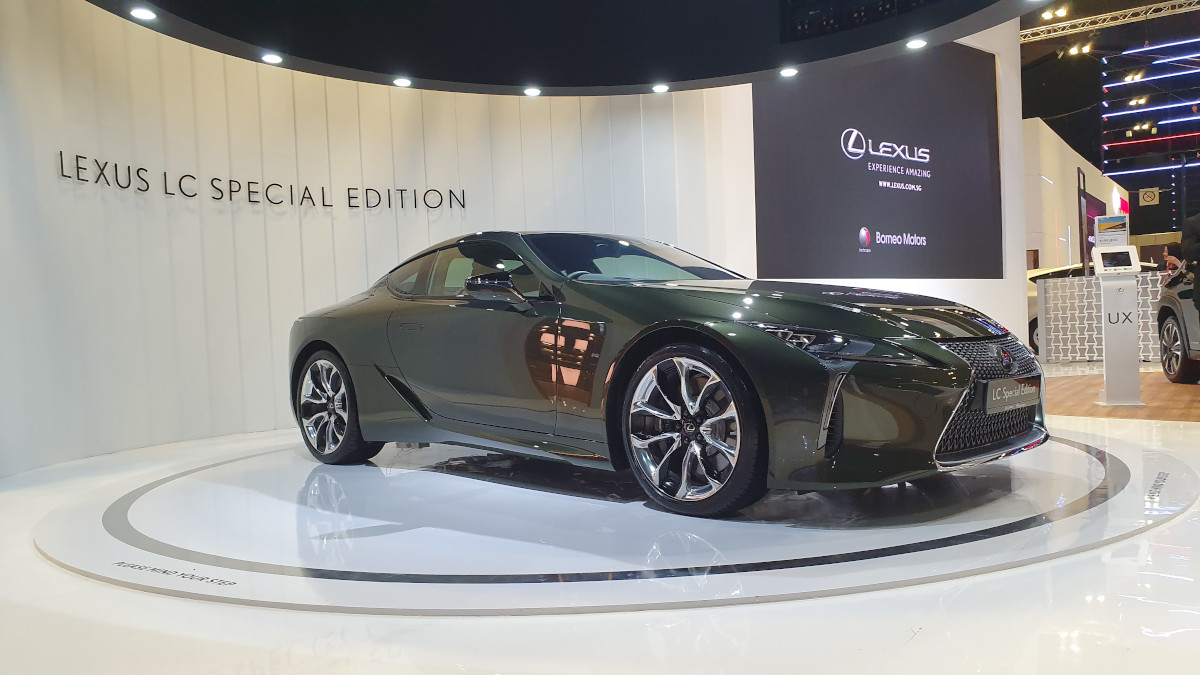 Gaze in awe at the Lexus LC Special Edition done in a Nori Green Pearl color
View other articles about:
Read the Story →
This article originally appeared on Topgear.com. Minor edits have been made by the TopGear.com.ph editors.
Share:
Retake this Poll
Quiz Results
Share:
Take this Quiz Again
TGP Rating:
/20