The Estrella-Pantaleon Bridge could be operational in June 2021

“The new Estrella-Pantaleon Bridge, also known as Rockwell Bridge, was supposed to have been finished by now. It was originally scheduled to open in December 2020, but unfortunately, COVID-19 happened and the timeline for the project’s completion had to be adjusted.

“How much longer do you have to wait to drive over this new P1.46-billion piece of infrastructure? The Department of Public Works and Highways (DPWH) says that the bridge is now 86% complete and that work on it is being fast-tracked to meet its new June 2021 opening. Preparatory works for approach road construction on both sides are already underway.

“While the agency is rushing to meet its deadline, it says it is taking a safety-first approach toward construction works moving forward. In a statement, the DPWH stressed the importance of being ‘proactive rather than reactive in dealing with the increased risk of illness from COVID-19,’ and that even a single positive case among personnel ‘can lead to an interruption, if not total work stoppage.’

“Once completed, the new 506-meter Estrella-Pantaleon Bridge will feature four lanes and three-meter sidewalks on both sides. It’s expected to accommodate up to 50,000 vehicles per day, cutting travel time between Mandaluyong City and Makati City to just 12 minutes. It should also help decongest EDSA by serving as an alternate route to and from the central business district.”

“There will be zipper lanes opened from Mondays to Saturdays—one in the morning from 5:30am to 8am, and another in the afternoon from 5pm until 8pm.

“The new traffic scheme aims to ease the congestion in the area during rush hours. The zipper lanes will only be open to light vehicles and motorcycles. Also, these will be restricted one-vehicle lanes, and overtaking will not be allowed. Motorists are advised that the traffic lights at the intersection will be kept at flashing mode, so all those traversing this area must pay attention to the deployed traffic enforcers at all times.

“For a better look, you can check out the illustration via the QC LGU’s official Facebook post here.”

“According to the Department of Transportation (DOTr), recent COVID-19 testing among rail line personnel has yielded a whopping 522 positive results.

“Of that figure, 117 positive cases came from the LRT-1, 143 from the LRT-2, 131 from the MRT-3, and another 131 from the PNR. It isn’t just the sheer number of cases that is worrying, though—the positivity rate among those getting tested should make any commuter sweat bullets, too.

“The LRT-1, for example, has a total of 1,185 employees. Of that total, 377 underwent testing and 117 individuals yielded a positive result—that’s 31% of those who’ve been tested. You can check out the rest of the COVID-19 data provided by the DOTr in the Facebook post here.

“The DOTr has already taken steps to address the situation, isolating positive individuals as well as any rail line employees still awaiting test results, close contacts of confirmed cases, as well as anyone exhibiting symptoms of COVID-19. Rail lines are also currently operating at a limited capacity, and additional PUVs have been deployed to help service affected passengers.”

4,400 PUVs and 250 routes will be activated starting tomorrow

“The Land Transportation and Franchising Regulatory Board (LTFRB) has announced that it is set to deploy thousands of more jeepneys and buses next week, with officer-in-charge Zona Tamayo confirming that 250 new routes will be opened and 4,400 additional buses and jeepneys will begin plying Metro Manila.

Expect more delays in the release of your license plates

“LTO head Edgar Galvante shared that plate production was put on hold after ‘key personnel’ at the plate-making facility tested positive for COVID-19, only to test negative following confirmatory tests. According to Galvante, the employees are still under quarantine, and that disinfection procedures have already been conducted.

Once and for all, no, cyclists do not need to wear face shields

“The Department of Health (DOH) is reminding the public that active-transport users—cyclists, electric kick scooter (EKS) users—are not required to wear face shields. The agency emphasized that this could pose potential safety risks on the road for these people.

“As stated in Section II(A)(5) of Joint Memorandum Circular No. 2021-00012: “[Due] to the possible vision impairment face shields bring, bikers and users of other forms of active transport are exempted from the mandatory use of face shields outside of their residences.”

“This refutes the surprising (and borderline confusing) announcement made before 2020 ended, wherein the use of face shields was made mandatory even for cyclists and joggers. Of course, the DOH is also reminding the public that face shields and other personal protective equipment must be when not riding any form of active transport.

“The agency’s press release reads: ‘The DOH emphasizes that face shields must be worn before and after cycling or other similar activities. The DOH further reminds active transport users that the use of face masks, and the observance of physical distancing, respiratory hygiene practices, and other appropriate health interventions must continue to be practiced while cycling or engaging in other forms of active transport.’”

Will we soon see more plastic waste used in the paving of roads?

“In February 2020, the DPWH–Bureau of Research and Standards (DPWH-BRS) successfully paved a portion of Taft Avenue in Manila City using asphalt mixed with reused plastic. Now, the agency has used the same technology to repair yet another road segment in the city, this time along Quirino Avenue in Paco.

“This new project is the second phase of DPWH-BRS research and development engineer Neilsen Campit’s Re-Entry Action Plan under the Australia Awards. It is the second small-scale pilot trial on the use of plastic bag wastes as additives or modifiers in hot mix asphalt (HMA).

“The paved portion along Quirino Avenue stretches 325 meters long—162 meters of which used HMA mixed with plastic wastes while 163 meters used conventional HMA. For this second phase, approximately 850kg of plastic waste was used. Similar to the first phase of the project, this was carried out alongside the DPWH–South Manila District Engineering Office, Readycon Trading and Construction Corporation, and Pilotage Trading.

“This pilot trial will be monitored for a year and assessed both monthly and quarterly using sand-patch, skid-resistance, and rutting tests, as well as crack mapping. Campit says that the success of these small-scale projects will enable the use (or reuse, rather) of plastic wastes in the construction of national and local roads.

“‘While this research shows potential as an alternative recycling method for plastic waste management as well as possible sustainable construction material, further evaluation should be undertaken to strengthen the use of plastic wastes for environmentally friendly road construction,’ Campit shared.

No more Easytrip reloading at Balintawak and Bocaue toll plazas

“Do you traverse the North Luzon Expressway (NLEX) often? Chances are, you’re an RFID user yourself. If that’s the case, then take note: the Easytrip reloading services at the Balintawak and Bocaue toll plazas will only be available until April 12, 2021.

“Eastyrip is the RFID used along all expressways operated by the Metro Pacific Tollways Corporation (MPTC). These are namely: the Subic-Clark-Tarlac Expressway, Manila-Cavite Expressway, Cavite-Laguna Expressway, C5 South Link, and NLEX.

“According to NLEX Corporation’s latest advisory, the remaining stations along NLEX and SCTEX effective April 13 will be as follows:

“Motorists are also reminded that cash lanes are for cash payments only. Of course, Easytrip reloading will still be available through various online banking and payment services as well as partner stores and kiosks.”

“Grab has announced that its drivers and delivery riders in Southeast Asia will be given free vaccines under a $20 million (P972.5 million) initiative to keep its partners at work during the pandemic.

“Drivers and riders who have completed a ride or delivery within three months before the administration of the vaccine and are in good standing can qualify for the free jabs, the company said in a statement. Overall, Grab seeded the GrabForGood fund with $50 million cash and $200 million in shares to help drivers, riders and merchants ride out the pandemic. The package includes discounted insurance cover, merit-based scholarships, and assistance for persons with disabilities.

“‘The GrabForGood Fund will commence immediate work on meeting the urgent need for COVID-19 vaccines, where it's not easily available,’ said Grab Group CEO and co-founder Anthony Tan.

“In communities where Grab is present, the company said it would provide support to build financial literacy, climate change resiliency, and relief from natural disasters.

“Grab cited an internal February 2021 survey among users wherein 92% of respondents said they were still worried about COVID-19. In the Philippines, 24 million people in Metro Manila, Laguna, Cavite, Rizal, and Bulacan returned to lockdown in late March as daily cases rose to record levels.

“Grab said it was sourcing vaccines and looking for inoculation centers. It did not specify when the vaccinations would start.” 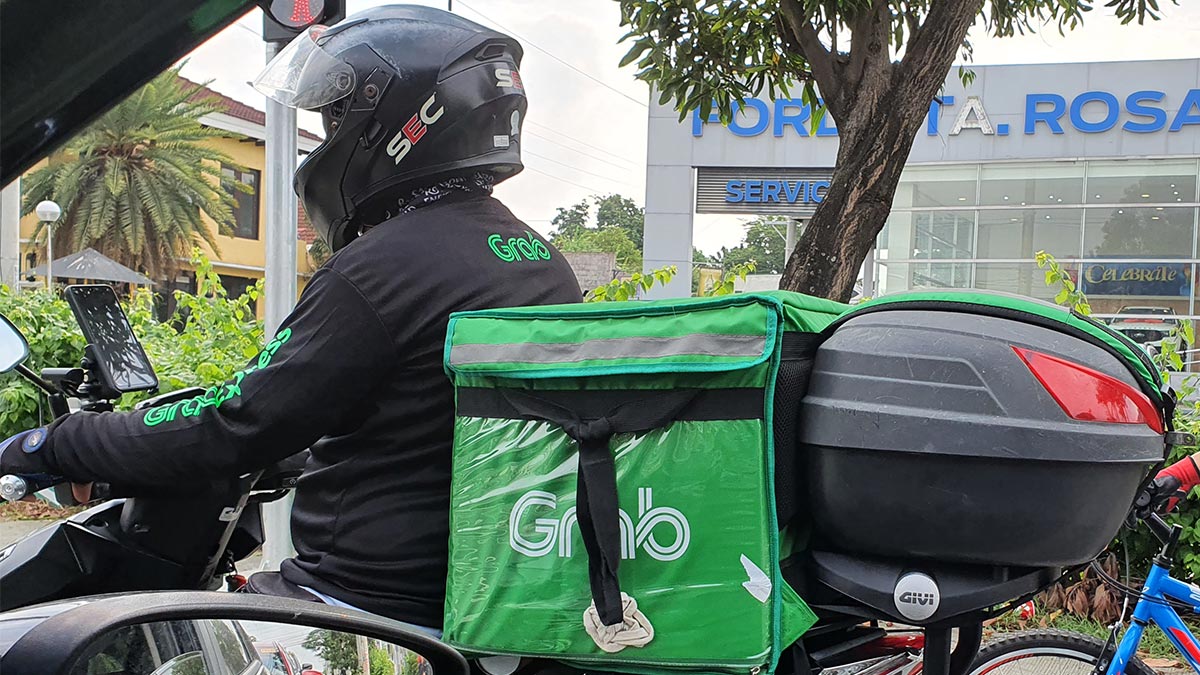 Grab to give free COVID-19 vaccine to drivers, riders in Southeast Asia
View other articles about:
Recommended Videos
Read the Story →
This article originally appeared on Topgear.com. Minor edits have been made by the TopGear.com.ph editors.
Share:
Retake this Poll
Quiz Results
Share:
Take this Quiz Again
TGP Rating:
/20