It’s a positive week for Angkas

“It’s official: The protective shield designed by motorcycle-taxi company Angkas has been given the thumbs up by the Inter-Agency Task Force (IATF) for the Management of Emerging Infectious Diseases.

“In a statement, Angkas said the approved design was the best among a number of prototypes it had tested. The tests were done in collaboration with various experts providing scientific input and technical support.

“What’s more, George Royeca, the company’s chief transport advocate, says the design will not be exclusively for the use of Angkas riders—it will be shared with the public, especially now that couples are permitted to travel together on one motorbike.

“‘This is our way of helping the commuting public,’ says the Angkas official. ‘We will share the specs and the materials used.’ The company, however, will not be selling the actual protective shields.”

“Earlier this week, we featured another protective-shield design that costs P1,500. According to Royeca, the Angkas shield costs around P200 to 250 to produce.”

“Public transportation hasn’t been much of a bright spot lately, but we have some news that will hopefully put smiles on commuters’ faces: The MRT-7 is now 58.95% complete as of June 2020.

“It’s been quite a while since this project was launched, but the Department of Transportation (DOTr) has just released a progress video, and it’s safe to say that the MRT-7 is really starting to take shape.

“Once operational, this 23km rail line will connect the MRT North Avenue Station to San Jose Del Monte in Bulacan and is expected to ferry 300,000 to 850,000 passengers daily. There will be a total of 14 stations built along this line, and it will also be connected to the other existing train lines in the metro such as the LRT-1 and MRT-3.”

Government employees are among the most rampant EDSA busway violators

“It’s been only a few weeks since the DOTr began interim operations of the new busway system along EDSA, and it’s almost inevitable that there will be motorists caught violating this system every now and then.

“However, according to Inquirer.net, the Metropolitan Manila Development Authority (MMDA) has recently stated that half of all those caught using these dedicated bus lanes illegally were government employees aboard private cars and motorcycles. According to agency spokesperson Celine Pialago, the violators were supposed to be fined P1,000 plus a separate P150 for disregarding traffic signs, but the government personnel were ‘given some consideration’ and were only penalized for the latter.

“She stressed the importance of this system saying that that government personnel—especially uniformed ones—are emulated by the public. Likewise, she reminded that the busway may only be used by government workers inside emergency vehicles.”

“Whereas before, only entitled VIPs could get COVID-19 tests, more people now have access to this crucial screening. And if initial antibody tests come back positive, then it’s best to get the final answer regarding COVID-19 with a polymerase chain reaction-based test kit—the kind where you need to get swabbed.

“St. Luke’s Medical Center started its drive-through service for this RT-PCR testing on July 13. You can avail yourself of the test at the hospital’s Taguig or Quezon City branch.

“St. Luke’s is offering this service for asymptomatic patients. It will be available daily from 7am to 4pm in Global City, and from 2pm to 6pm in Quezon City. Just be sure to set an appointment at least two days before by contacting the hospital anytime between 8am and 5pm on weekdays. St. Luke’s also offers blood tests through the drive-through service.”

If this law is passed, those who always cancel on delivery riders could go to jail

“Senate Bill No. 1677, filed by Senator Lito Lapid, will punish individuals who cancel confirmed grocery or food deliveries that have already been paid for by the rider. A person must cancel an order at least thrice in one month to be convicted, after which he or she could serve one to six months of jail time. He or she will face a fine not exceeding P100,000, too.

“To prevent cancellations from happening, the bill seeks the implementation of “Know-Your-Customer” (KYC) rules, requiring customers to submit verified proof of identity and residential address.

“The bill will also require delivery providers to create a reimbursement scheme that will cover the full amount of a canceled order a rider has paid for. Under this setup, a rider must be reimbursed within one day of a canceled order, and failure of a company to implement this scheme will result in a fine of up to P500,000.”

“Villar provided no further details and did not disclose whether or not he was experiencing any symptoms. Chances are several other agency personnel will need to undergo quarantine, as Villar is a regular presence at DPWH site visits.”

“On July 15, Tarlac–Pangasinan–La Union Expressway operator San Miguel Corporation (SMC) joined the DPWH in formally opening the final 11.43km section of the northern tollway. As it stands, there are now 10 interchanges and 11 toll plazas across the provinces of Tarlac, Pangasinan, and La Union.

“This final section extends TPLEX from Pozorrubio in Pangasinan all the way to Rosario in La Union. The DPWH says that through this new stretch of road, getting from Manila to Baguio City in just three hours is now possible. We all know how grueling the traffic up north can be especially during peak seasons like the holidays or in summer, so this definitely comes as good news for motorists.”

“On July 15, the City of Manila launched its own COVID-19 drive-through testing center, which Mayor Isko Moreno says will be open to both residents and non-residents. The center is located in front of the Andres Bonifacio Monument, and will offer free testing, according to Moreno.

“A Facebook post by the Manila Public Information Office stated that four COVID-19 testing machines will be used in the program. In a press release dated July 11, the local government announced it had purchased three COVID-19 serology testing machines from American healthcare firm Abbott for P6 million each, and that it’s the first LGU to procure this type of equipment. Moreno says the procurement is a ‘good long-term investment,’ since the machines can also be used for detecting cancer, hepatitis, thyroid issues, and other infectious diseases.

“As with rapid test kits, serology testing for COVID-19 also involves the extraction of a blood sample from the patient. Each testing machine can process up to 50 samples an hour. As for the accuracy of the equipment, Abbott claims it has 99.6% specificity and 100% sensitivity rates. Confirmatory swab tests—presumably for those with positive results—will still be performed in accordance with local public-health protocols.

“The city’s healthcare workers will be given priority for testing. At the drive-through testing facility, Manila Health Department frontliners will be in charge of extracting and handling blood samples from patients. Up to 89,600 tests may be completed in a month. Meanwhile, those without vehicles may undergo testing at the following facilities: 1) Andres Bonifacio Memorial Medical Center; 2) Ospital ng Sampaloc; 3) Ospital ng Maynila; and, 4) any health center near their residence.”

...and its second one opened just a few days later

“This was the only time that the testing facility was open on a weekend, as its official operating schedule will be from Mondays through Fridays, 8am to 5pm. The LGU says it aims to administer 700 tests per day through this new facility.

“Meanwhile, the drive-through testing center in Lawton will continue to operate, and Moreno said that the capacity for that facility will be 200 tests per day. It will operate on a similar schedule as the Quirino testing center. As of 5pm on July 17, 2020, the Lawton testing center alone had already administered 1,131 tests. Of the people tested, 808 were Manila residents while 323 were non-residents. Based on the results that have been released so far, 68 tested positive for COVID-19 while 447 were negative.”

Grab PH president Brian Cu will be stepping down next month

“Brian Cu is leaving his role as president of Grab Philippines effective August 14, 2020. A statement released by the company on July 15 said that Cu ‘has decided to move on to focus other business interests as an entrepreneur in the startup scene.’

“Cu has led the Singapore-based company’s operations in the country since it was launched here seven years ago. He has steered the company since it started as a ride-hailing app and eventually transitioned into a ‘superapp’ with multiple verticals including food and package delivery and other services. He also oversaw the company’s merger with former competitor Uber in 2018.”

“The Land Transportation Office (LTO) has already resumed operations under general community quarantine, but it seems that the backlog caused by the agency’s shutdown has been difficult to manage. Emission testing centers, in particular, have reportedly seen car owners arrive in droves. This has resulted in long lines that, according to Cagayan de Oro 2nd District representative Rufus Rodriguez, lead to violations of social-distancing protocols.

“Because of this, the congressman has filed House Resolution No. 1007, which aims to suspend the emission testing requirement for motor vehicle registration until the end of 2020. According to an Inquirer.net report, Rodriguez cited the ‘very long lines and unusual delays in the process of registration, especially in emission testing centers’ as the reason behind the resolution.

“‘An example is Cagayan de Oro City where complaints have been piling up because what is happening is that owners of motor vehicles have to line up very early in the morning in order to get a number which they get after lining up for four to five hours, and then they wait until their number is called and they will be given an appointment for their emission test which is at least two weeks away,’ Rodriguez said.

“He added that the temporarily suspending this requirement would allow the DOTr and the LTO to probe the reported irregularities in several private testing centers.” 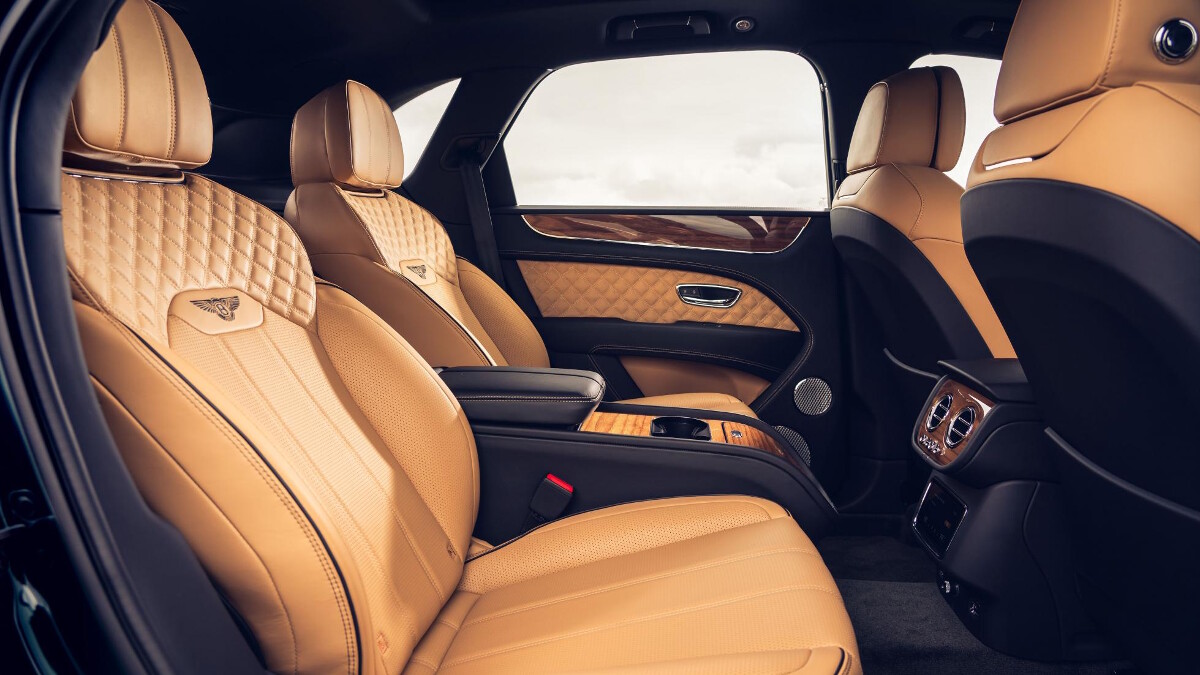 The four-seat Bentley Bentayga’s interior is the definition of palatial
View other articles about:
Read the Story →
This article originally appeared on Topgear.com. Minor edits have been made by the TopGear.com.ph editors.
Share:
Retake this Poll
Quiz Results
Share:
Take this Quiz Again
TGP Rating:
/20