“Well, this definitely isn’t a good look for the underground motorbike ride-hailing industry.

“In a Facebook post, Metropolitan Manila Development Authority (MMDA) traffic chief Bong Nebrija shared that agency enforcers recently apprehended a habal-habal rider along EDSA. A distressed passenger revealed that she was being charged an absurd amount for a trip from Monumento.

“What kind of rate are we talking about here? The passenger was being charged P50...per kilometer.

“Have you been a Skyway Stage 3 regular since the new piece of infrastructure opened late in 2020? If so, you’re probably at a crossroads now, as San Miguel Corporation (SMC) has begun collecting toll fees after letting motorists use the elevated expressway for free over the past several months.

“You can check out the official Skyway Stage 3 toll rates in our previous report. Depending on where you’re coming from and the destination you’re driving to, you could end up shelling out as much as P528 one way.

“If you’re someone who doesn’t want to pay Skyway Stage 3’s toll rates, the Metropolitan Manila Development Authority (MMDA) wants you to know there are alternatives.

“In a Facebook post, MMDA traffic chief Bong Nebrija shared that motorists opting to no longer use Skyway Stage 3 can use Metro Manila’s main North-South Mabuhay lane instead.

“‘Hey guys I heard that Skyway 3 will start charging on Monday, July 12, 2021,’ the official said. ‘Just in case there will be an influx of Skyway 3 users back to Edsa you may want to take an alternate route to the South.’

“Here’s how it goes if you’re coming from EDSA:

“Nebrija also added that the MMDA is out in full force ridding this route of illegally parked cars, performing sidewalk clearing operations, and placing signs to guide motorists.”

The MMDA is studying returning the number coding scheme

“Are you liking the absence of Metro Manila’s number coding scheme during the COVID-19 pandemic? Well, enjoy it while it lasts, because it might only be a matter of time before it returns.

“This news comes as the MMDA anticipates a surge in vehicles using EDSA, as motorists are expected to forego taking Skyway Stage 3 now that the San Miguel Corporation (SMC) has begun collecting toll along the elevated expressway.

“According to Abalos, the agency estimates that around 20,000 additional vehicles will now be looking for an alternative to Skyway Stage 3—kind of a problem considering EDSA sometimes hits 399,000 cars per day.

“On Thursday, the Skyway O&M Corporation, operator of the Skyway Stage 3, reported that traffic has been easing on the elevated facility after motorists complained about it during the first day of toll fee collection.

“‘We apologize for the inconvenience. While this was not totally unexpected on the first day of toll collection, for our part, we know we have to do better. Hopefully, with the measures we have put in place, traffic conditions will continue to improve and normalize,’ says San Miguel Corporation (SMC) president Ramon S. Ang.

“Ang explained that the traffic congestion experienced last Monday at the toll exits of Skyway Stage 3 was triggered by motorists with insufficient load, as well as those who availed of the Autosweep RFID sticker installation and reloading sites at the last minute.

“To solve this problem, the tollway operator implemented the following measures:

“The Skyway Stage 3 patrol personnel currently asks motorists without RFID stickers to exit the toll booth and pull over to the side to avoid causing traffic. They are given the option to have the RFID tag installed on their vehicle, reload, or pay in cash. The SMC reiterated earlier that this is only a temporary setup while the stakeholders are still in the period of adjustment.

“For the past two days, Autosweep has been sending text messages to its subscribers to make sure that they have enough load when entering Skyway Stage 3 to avoid ‘RFID card confiscation.’ 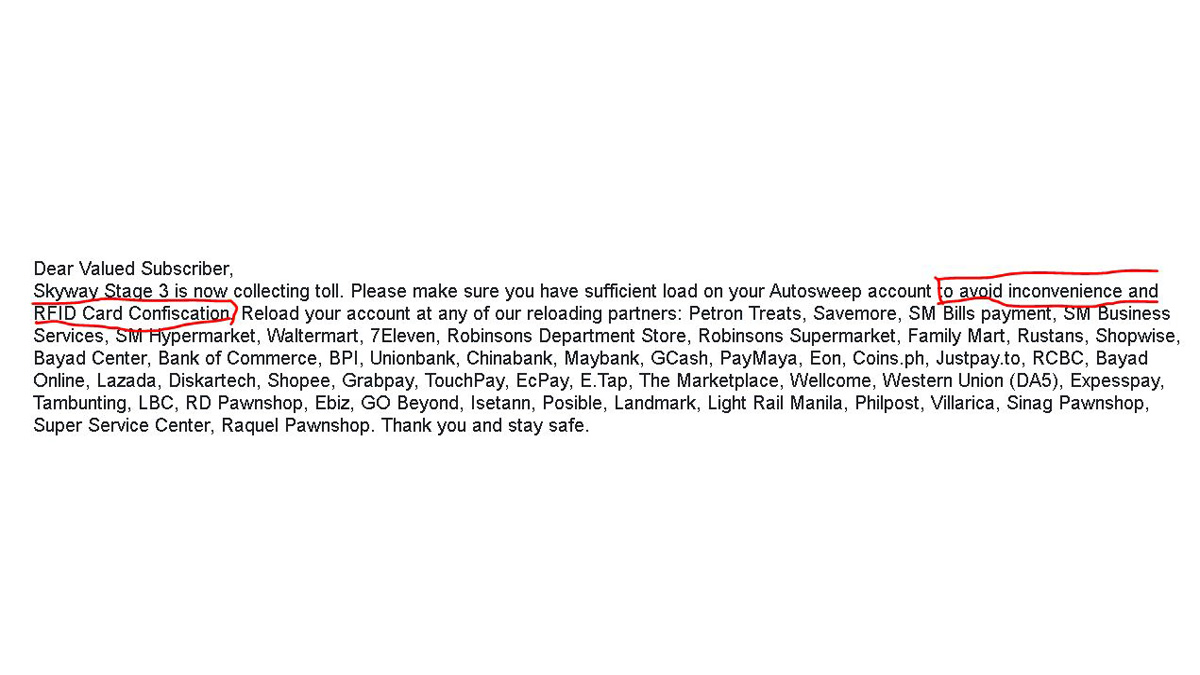 “However, it does not say in the message when the confiscation of RFID cards will begin. Also bear in mind that the Toll Regulatory Board (TRB) had given two tollway systems the go-ahead to implement a ‘three-strike’ policy for those who use the automated toll collection (ATC) lanes with insufficient or no load.”

“If the Anti-Red Tape Authority (ARTA) will have its way, then it seems more changes are up for the motor vehicle registration system of the Land Transportation Office (LTO).

“In a recent statement, ARTA director general Jeremiah Belgica put forward his recommendation to remove the compulsory third-party liability (CTPL) insurance from the LTO’s MV registration process for vehicles that are already covered by a comprehensive automotive insurance policy.

“TPL is basic car insurance that every motor vehicle owner is required to avail when registering his vehicle with the LTO. This applies to all types of vehicles, including private cars, commercial vehicles, and motorcycles. Belgica said that this “appeared to be redundant and inflicting additional expense” to motorists.

“‘I implore them to look into it and reconsider waiving the requirement provided that the vehicle owner can show proof of comprehensive insurance,’ said Belgica. ‘As we seek to eliminate overregulation and unnecessary requirements, this would reduce the burden on the transacting public, streamline the vehicle registration process, and promote good regulatory principles.’

“Belgica added that this is in line with the agency’s anti-fixing campaign. He said that in one of the ARTA’s entrapment operations, it discovered that the establishment offering TPL insurance was also ‘collaborating with the fixers and exploiting the public by facilitating medical, insurance, and emission testing.’”

“These facilities never really disappeared, but they were left in limbo earlier this year when authorities decided to remove them as a requirement for Land Transportation Office (LTO) registration. This is no longer the case, though, as some LTO offices will soon begin only accepting vehicle inspection reports produced by PMVICs.

“Under Department of Transportation (DOTr) memorandum circular no. 2021-02, authorized PMVICs are now each assigned a geographical area of responsibility (GAOR). If an LTO district or extension office falls under a PMVIC’s GAOR, it will only accept vehicle inspection reports from that facility.

“Keep in mind that a full PMVIC motor vehicle inspection still is not required and that only the visual inspection and emissions test is necessary for LTO renewal.

“In cases where a motorist plans to renew his or her vehicle registration at an LTO office that does not fall under a PMVIC’s GAOR, he or she still has the option of having the car inspected via an authorized private emissions testing center (PETC) and the LTO’s own process.”

“The first day of toll-fee collection along Skyway Stage 3 wasn’t as smooth as San Miguel Corporation (SMC) would have wanted. Birthing pains were apparent, as there was significant traffic buildup in several toll plazas along the elevated expressway.

“Since then, however, SMC has made some adjustments to address the situation and ensure smoother traffic flow along the tollway. This included the deployment of more personnel for traffic management and toll collection.

“The company also opened more lanes for Autosweep RFID installation and reloading. Meanwhile, motorists without RFIDs or had insufficient balance in their Autosweep accounts were immediately asked to exit the toll plaza and move aside to avoid inconveniencing other motorists.

“‘It’s unfortunate that many motorists were caught in traffic last Monday. We apologize for the inconvenience. While this was not totally unexpected on the first day of toll collection, for our part, we know we have to do better. Hopefully, with the measures we put in place, traffic conditions will continue to improve and normalize,’ said SMC president Ramon S. Ang. ’Our Skyway teams are always on the ground, and we monitor our expressways via cameras 24/7. If there’s any issue, we can respond and make corrective measures very quickly.’

“In addition, Ang also requested all motorists to get their RFIDs. He reiterated that these will ensure not only faster travel, but also safer trips along SMC-operated expressways.”

Is the new Estrella-Pantaleon Bridge pedestrian-friendly?

“In case you missed it, we recently looked into the pedestrian component of the recently opened BGC-Ortigas Bridge, and suffice to say that at this point in time, it’s not looking to be the most pedestrian-friendly new piece of infrastructure to rise in the metro. Two things working against it: sidewalks that are not uniform in width and don’t extend across the entire length of the structure, and pedestrian access that entails a leg-cramping steep climb. Check out our review here.

“We’ll go back and make a full assessment once the structure has been fully completed. In the meantime, we turn our attention to the Estrella-Pantaleon Bridge, aka the Rockwell Bridge, which promises to cut travel time between the cities of Makati and Mandaluyong to just 12 minutes when it opens this month. And while construction hasn’t hit 100% completion yet, this bridge is looking more pedestrian-friendly compared with its counterpart across EDSA.

“The images here are taken from a vantage point overlooking the Makati end of the structure, and show that the sidewalks on both sides have railings separating them from the carriageway. The pedestrian walkways begin several meters into the ramp near the T-junction of Estrella and JP Rizal Rizal Streets; access stairs have yet to be constructed as of this writing. 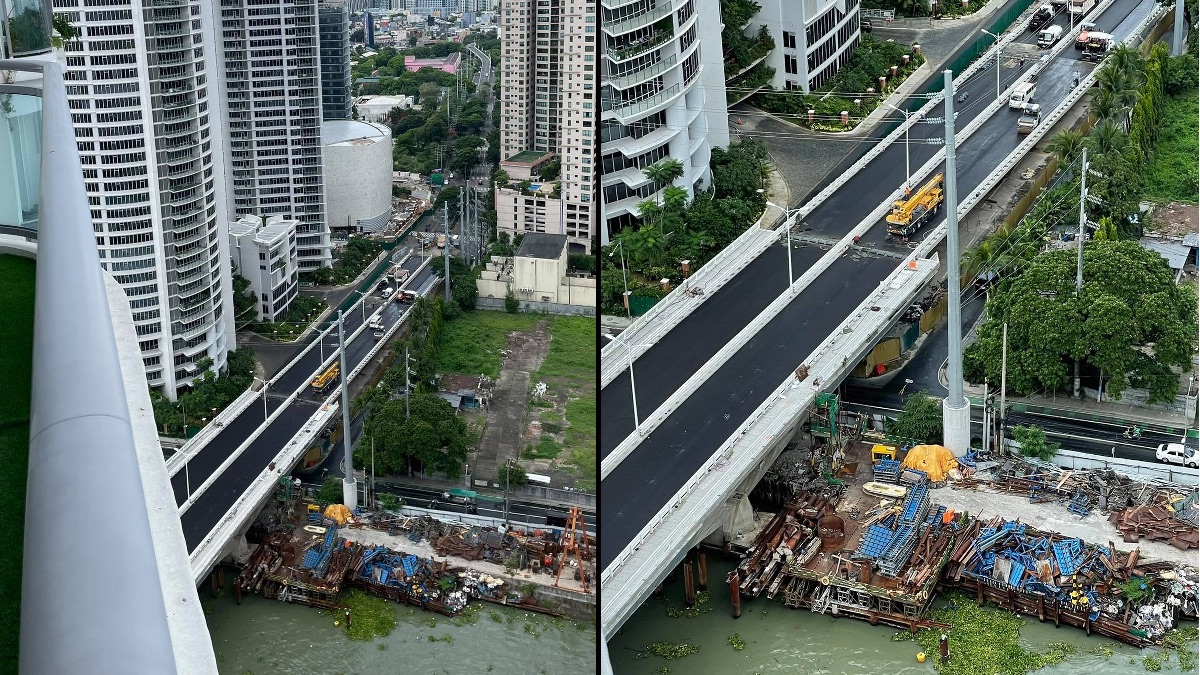 The DOTr now allows small pets inside the MRT-3

“Any fur parents here who take the train regularly? Good news for you, folks: The Department of Transportation (DOTr) has confirmed that pets are now allowed inside the MRT-3.

“The announcement comes after a Facebook post featuring a dog aboard the train recently went viral. Look:

“Of course, there are certain guidelines that need to be followed in case you decide to bring your furry friend along with you during your commute. According to the official announcement the pets—be it a dog or a cat—must be enclosed in a pet carrier that does not exceed 610mm x 610mm (2ft x 2ft) in size. This means if you’re bringing a bigger pet like, say, an adult Labrador, we doubt you’ll be allowed to board the MRT.

“The DOTr is also reminding commuters that strict health and safety protocols must still be observed when riding the MRT-3. Also, take note that these guidelines only cover the MRT-3 and do not apply to other rail lines such as the LRT-1 and LRT-2.” 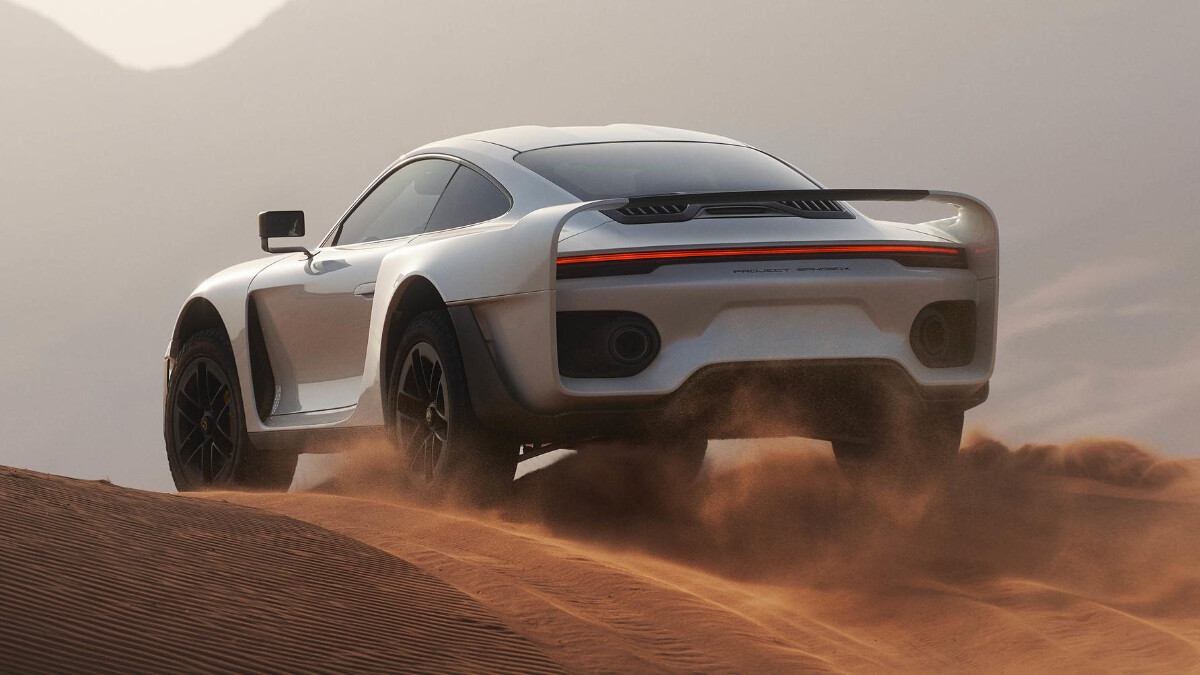 The ‘Marsien’ is the pothole-proof supercar you’ve been waiting for
View other articles about:
Read the Story →
This article originally appeared on Topgear.com. Minor edits have been made by the TopGear.com.ph editors.
Share:
Retake this Poll
Quiz Results
Share:
Take this Quiz Again
TGP Rating:
/20