“By now, you may have already heard about the City of Manila’s no-contact apprehension program (NCAP), which uses cameras along major thoroughfares to catch traffic violators and record their vehicles’ plate numbers. After the system was launched in December last year, traffic violations in the city have reportedly gone down by 25% to 31% month-on-month in the first half of 2021.

“It’s a result that Quezon City will be looking to emulate with the launch of its own no-contact apprehension program. The local government has announced that the policy was recently approved in the second reading by the City Council, though there’s no mention yet of when the program will be rolled out.

“Earlier this year, the QC LGU had signed a public-private partnership agreement with QPAX Traffic Systems for the program’s implementation. The latest release states that enforcement cameras and other monitoring equipment will be installed along 15 of the city’s major thoroughfares, and traffic violators caught in the act will be sent a notice of violation (NOV) in the address listed in the vehicle’s registration records.

“No-contract apprehension, according to the LGU, will not only reduce the number of traffic enforcers needed to patrol the roads, but will also minimize close contact between them and motorists. Funds that will be saved from having fewer traffic enforcers on duty will be diverted to the city’s social services.”

“Looking forward to the opening of the new MRT-7 line? We have some good news for you, then. San Miguel Corporation has announced that it will be taking delivery of the new MRT-7 trains from South Korea next week.

“There will be two trainsets arriving, each measuring 65.45m long and consisting of six cars. The trains were procured from Hyundai ROTEM and have already cleared inspections and factory acceptance testing with the Korea Railroad Corporation (KORAIL).

“‘The timely arrival of these brand new, high-quality trains from South Korea—known as one of the world’s best train and rail systems builders—is such a welcome development, and I believe holds a lot of significance,’ said SMC president Ramon S. Ang. ‘At a time when many are feeling uncertain about our country’s future because of the pandemic, this shows that the job of nation-building, continues; that the work of improving our infrastructure, boosting our economic growth prospects, and investing in our country’s brighter future, also doesn’t stop—especially for us in San Miguel.’

“Ang shared that as of this writing, the project is 54% complete. Also, more trains will be arriving in the coming months until all 36 trainsets (108 cars) are delivered.”

“Sure, infrastructure projects are popping out left and right all over the country, but this doesn’t necessarily mean we’ll be in the clear anytime soon when it comes to urban development. In fact, one of the country’s top urban planners says we have a long way to go in this department.

“According to urban planner and green architect Felino ‘Jun’ Palafox Jr., the Philippines needs to put up at least 100 new cities by 2050 if it wants to avoid a repeat of Metro Manila’s current situation.

“Palafox, who is currently working with the San Miguel Corporation’s (SMC) upcoming airport and aerocity in Bulacan, shared that this conclusion came following analysis at his urban planning and architectural firm, Palafox Associates.

“He added that SMC’s aerocity development—which includes the massive new P740-billion New Manila International Airport project—can help pave the way for future green cities in the country, as it will incorporate the best practices of ‘green, sustainable, and disaster-resilient architecture’ from the world’s top cities.

“‘I’m aligned with the mission, vision, and goal of Ramon Ang. He invited me to partner with him in this new undertaking: a green aerotropolis,’ Palafox said. ‘At Palafox, we’ve analyzed that we need at least 100 new cities all over the Philippines by 2050.

“‘If we don’t do it, our cities will become as bad, if not worse than Metro Manila. We envision the Bulacan Aerocity development as the first model and pacesetter for future green and sustainable cities in the country.’

“Some of the Metro Manila urban-planning mistakes that Palafox says he wants to address in his latest undertaking include Makati City and Bonifacio Global City’s ‘discriminatory’ zoning, and cities’ obsession with ‘location, location, location.’

“The urban planner also pointed out how gated communities have made parts of Metro Manila less walkable, and suggested that the mess the nation’s capital is in might be a cultural issue, too.

“‘I’m talking about the colonial town plaza concept, where the elite or illustrados lived around the town plaza where the church, munisipyo, and central park are. Meanwhile, the peasants or indios and Chinese merchants lived in extramuros, or outside. That was 500 years ago, but it’s still a concept in our urban planning development today,’ he explained.”

LTO extends registration validity of cars with plates ending in 5, 6, 7

“To all car owners whose vehicles’ plates end in 5, 6, or 7, take note that the Land Transportation Office (LTO) has once again issued an extension on the registration validity of your vehicles. If you’re worried you’re running out of time to renew your LTO registration, then you’re in luck.

“For cars with plates ending in 5 and 6, the registration validity has been extended until September 30, 2021. For those ending in 7, meanwhile, registration will remain valid until October 31, 2021.  Likewise, the agency is reminding the public once again to follow strict safety protocols when heading to any LTO office.

“There were no reasons stated for the second extension, but we can assume that this was done in light of the recent implementation of enhanced community quarantine in several parts of the country, including Metro Manila.

“Take note that there will be overlaps among these recent extensions, though, as the registration validity of vehicles with plates ending in 8 and 9 have also been extended to the end of October and November, respectively. You can read more on that here.”

“Recently, the San Miguel Corporation (SMC) got people talking after sharing details of its upcoming airport and Aerocity projects in Bulacan. The latter sounds like it has a lot going for it so far, including one of the country’s top urban planners in Felino ‘Jun’ Palafox Jr.

“According to Palafox, the SMC Aerocity will set the tone for the future of green and sustainable cities in the Philippines.

“One of the project’s most promising propositions is a bicycle highway that will be connected to the Aerocity’s train system. Besides this, its waterfront area will feature walkways and promenade areas.

“Palafox also says the outcome will be a “healthy city” that will be both ‘walkable and attractive’ and will not feature many walls. That last quality, he added, will lessen the need for security, as Palafox believes walled cities encourage crime and have a negative impact on a city’s ventilation.”

“As expected, the Metropolitan Manila Development Authority (MMDA) has announced that the capital’s number coding scheme will continue to remain suspended.

“In a Facebook post, the traffic agency said that the measure will remain suspended “until further notice,” reiterating that movement is allowed for transporting essential goods and for activities and businesses permitted to operate by the Inter-Agency Task Force for the Management of Emerging Infectious Diseases (IATF). Look:

The truck ban suspension, meanwhile, is extended until September 7 only

“In a Facebook post, the agency announced that Metro Manila’s truck ban will continue to remain suspended until September 7, which is next Tuesday. Look:

“The move comes in a bid to keep essential goods moving freely in and out of the nation’s capital while it remains under a state of modified enhanced community quarantine. The MMDA also added that this update does not cover the length of EDSA from Magallanes Interchange in Makati City to North Avenue in Quezon City, where the truck ban will remain enforced.”

“Missed Caltex’s ‘Biyaheng Bakunado’ promo for vaccinated customers back in July? If you’ve since gotten at least one dose of a COVID-19 jab, here’s your chance to avail yourself of the fuel company’s discounts.

“From September 1 to 21, Caltex Philippines is doing a second run of the promo, which allows vaccinated customers to get fuel discounts of P3 per liter for Platinum and Silver with Techron, and P2 per liter for Diesel with Techron D. All you need to do is find the closest participating station (click here for the full list), and present a valid ID as well as a vaccination card showing you’ve had at least one dose of a COVID-19 vaccine. Your name and other details on the vaccination card and the ID have to match, of course.

“As before, you need to avail of this personally at participating stations, where you will be required to fill out a log sheet with your personal details. There’s still a daily limit of 60 liters and two transactions, and other discounts and loyalty programs may not be applied in conjunction with this promo.” 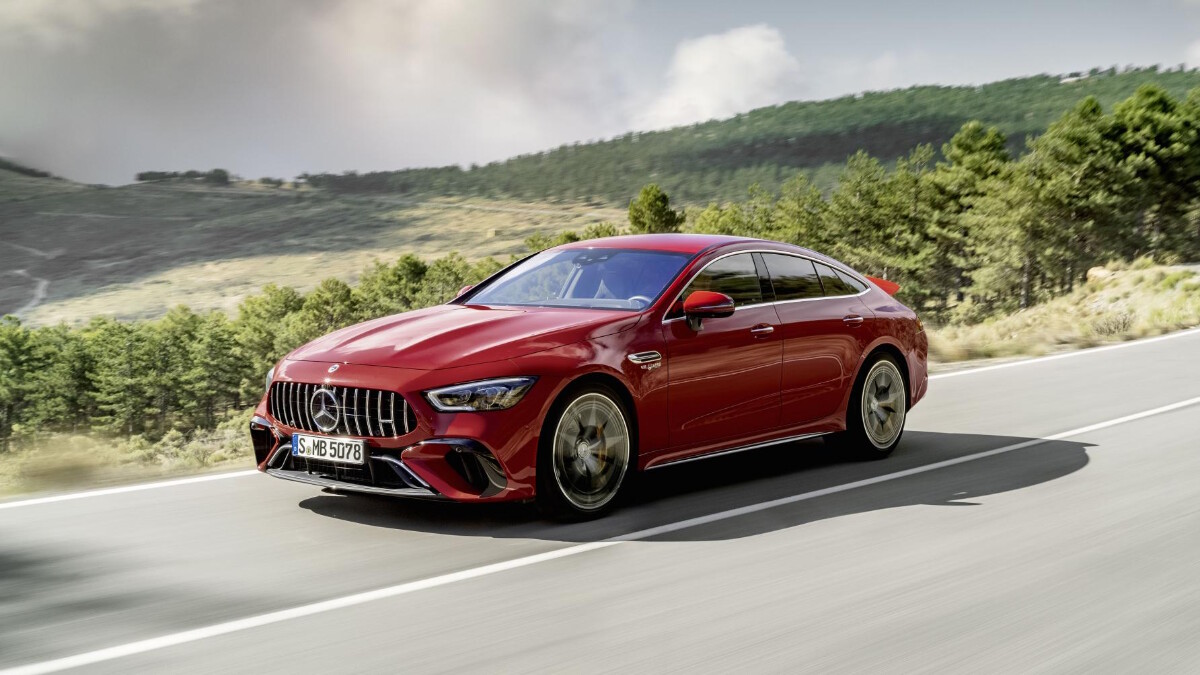 The four-door Merc-AMG GT has 831hp and 1,468Nm in plug-in hybrid form
View other articles about:
Recommended Videos
Read the Story →
This article originally appeared on Topgear.com. Minor edits have been made by the TopGear.com.ph editors.
Share:
Retake this Poll
Quiz Results
Share:
Take this Quiz Again
TGP Rating:
/20