“Bad news for reckless motorists: It looks like you’re going to have a harder time getting away with traffic violations in Quezon City now.

“The city has announced that it has implemented a dry run of its new no-contact traffic apprehension program (NCAP). This kicked in yesterday and will initially last for 30 days—a period during which the local government will hold off from handing out fines to ‘captured’ motorists.

“After the trial period, violators caught by the NCAP will be fined P2,000 for their first offense, P3,000 to P4,000 for their second, and P5,000 for the third. The LGU has yet to clarify, though, how the fines will vary depending on the type of violation.

“So, how does this setup work? Basically, high-tech cameras equipped with artificial intelligence are tasked with capturing the plate numbers of cars committing traffic violations by taking a photo. A ‘notice of violation’ or NOV will then be generated by the NCAP system.

“This NOV will contain a timestamp of when and where the violation occurred and will be sent to the LGU for review. If approved, the violator will receive his or her NOV at their address, and they will have 30 days to settle the fine.”

“The Land Transportation Office (LTO) recently launched the pilot testing of its new Central Command Center (C3), which means motorists can now send reports of traffic violations and road incidents to the agency.

“You can get in touch with the LTO through the official Facebook pages of its central and regional offices or by sending an email to the LTO Digital Media–Public Assistance Office (DM-PAO) via ltocdmpao@lto.gov.ph.

“The LTO listed the violations that can be reported: smoke belching, road-crash incidents, reckless driving, loading and unloading of passengers in unauthorized areas, disregarding traffic signs, and unsafe vehicles operating on the road. Other reports may also be filed, but the violation must be specified.

“You can check out some examples from the LTO’s advisory below:

“The agency is accepting reports through its hotline at 1-342-586 or through the official CitiSend app as well—you can read more about that one here.”

“The COVID-19 crisis may have kept us locked up in our homes for the most part over the past year and a half, but many of us still got our chance to travel whenever restrictions eased up.

“According to digital travel platform Agoda, however, Filipinos’ destination preferences have changed drastically throughout this pandemic. The company’s hotel-booking data show that more people are now taking road-trip destinations.

“Metro Manila and Cebu are still the two most-booked locations from June 2019 to June 2021, but third-placer Boracay and fourth-placer Palawan have been completely bumped off of their rankings, dropping to sixth and 14th, respectively. Popular surfing locations La Union and Siargao are now out of the top 20 rankings as well.

“Taking the third spot is Tagaytay—one of the closest escapes from the Greater Manila Area—and the fourth is Angeles/Clark. Subic and Cagayan de Oro have also entered the top ten. Other locations nearer to the capital such as Bataan, Dagupan, and Tarlac are now further up the ladder.

“Agoda notes that Biñan, Bulacan, Antipolo, Cavite, and Pampanga were the destinations that saw the biggest jump in bookings, as these are all two to three hours away from the metro. The go-to locations include the Hinulugang Taktak Falls in Antipolo, the Tibagan Falls in Biñan, Mt. Pico de Loro in Cavite, the Puning Hot Springs in Pampanga, and the Biak na Bato National Park in Bulacan.”

The Binondo-Intramuros Bridge could be open by Q1 2022

“The Department of Public Works and Highways (DPWH) told us a few months ago that it is eyeing ‘substantial completion’ of the Binondo-Intramuros Bridge by the end of the year. Now, the agency has announced that the bridge could be opened by the first quarter of 2022.

“In a recent statement, the DPWH reported that the project is now at 81% completion. Current activities at the site include reorientation of high-tension cables alongside Estero de Binondo that are affected by the ongoing construction. The agency is now also working on the foundations of the Magallanes-Riverside drive on-ramp and the Solana Street off-ramp on the Intramuros side of the bridge.

“The DPWH expects progress will hasten further as soon as the ramp components—which are fabricated in Shanghai, China—arrive.

“The Binondo-Intramuros Bridge is a 680m basket-handle tied steel arch bridge that is expected to serve 30,000 motorists daily once completed. The P3.39 billion project was financed through an aid grant from China and is being implemented by the DPWH Unified Project Management Office Management Cluster 1.”

“From a previous 10pm-4am curfew, a new 12am-4am curfew will be imposed around the metro. Metropolitan Manila Development Authority (MMDA) chairman Benhur Abalos recently hinted at this adjustment, citing the steady decline in active COVID-19 cases. You can check out Valenzuela City mayor Rex Gatchalian’s announcement below:

“According to the figures released by the Department of Health (DOH), the number of active cases across the country has dropped drastically over the past month. The 185,706 active cases on September 11, 2021 are now down to just 98,894 as of October 11, 2021. Over the same period, the utilization rates of hospital beds and ventilators have also gone down significantly.”

“The Metropolitan Manila Development Authority (MMDA) has confirmed that number coding will remain suspended when the capital region’s quarantine status eases to Alert Level 3 from October 16 to 31, 2021. As before, the suspension of number coding does not cover Makati City, which has been implementing its own modified scheme.

“Check out the official MMDA announcement and the Makati City number-coding guidelines below:

“So, what else do you have to know about Metro Manila’s shift to Alert Level 3? The first thing is that curfew hours have been adjusted, and now run from 12am to 4am. This change took effect yesterday.

“Another change is that intrazonal and interzonal travel shall be allowed ‘subject to reasonable restrictions based on age and comorbidities.’ According to the guidelines set by the Inter-Agency Task Force for the Management of Emerging Infectious Diseases (IATF), these restrictions are to be determined by local government units themselves. If you’re planning an out-of-town trip, it’s best to reach out to your destination’s LGU to get an update on the latest requirements and restrictions.

“In addition, persons aged below 18 and above 65, and those belonging to the vulnerable population, shall be permitted to leave their residences to obtain essentials or for work in permitted industries. For individual exercise, the requirement to stay within your general area of residence shall no longer apply; any person of any age may conduct individual exercises outdoors regardless of vaccination status.”

“‘We can now confirm that this morning there was a petition that was filed for a fare increase,’ Delgra shared during the deliberations on the substitution bills by the Senate Committee on Transportation. 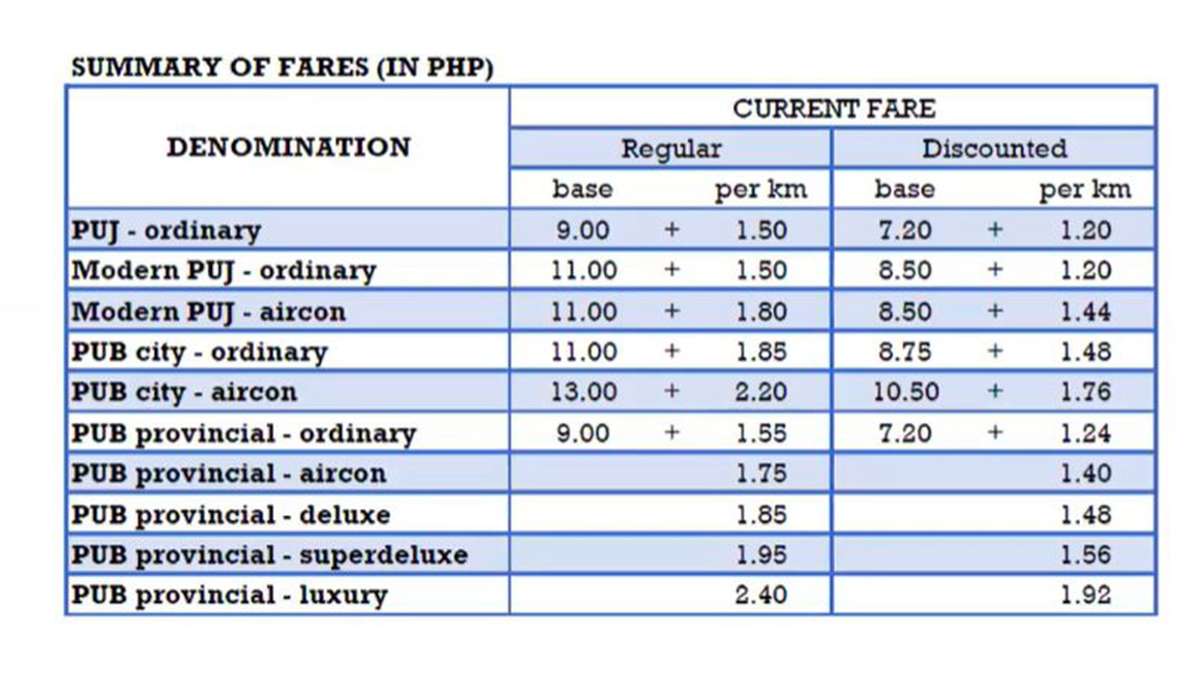 “The transport groups pushed through with the petition despite Department of Transportation (DOTr) secretary Arthur Tugade declaring that he is strongly against it because the public is still struggling from COVID-19.

“Rubbing salt into the wound is a series of fuel-price increases in recent weeks. According to reports, The price of gasoline has reportedly jumped by P17.85/L, diesel by P16.56/L, and kerosene by P14.19/L since January.”

LTO extends registration validity of cars with plates ending in 0

“PSA: If your car’s license plate number ends in 0, be advised that the Land Transportation Office (LTO) has extended its registration validity until December 31, 2021. Check out the agency’s official announcement below:

“The announcement appears on the LTO’s main Facebook page itself, not on the social-media accounts of regional offices, so the extension applies to all vehicles across the country, regardless of quarantine level.

“Also, if your vehicle’s plates end in 7, 8, or 9, their registration validities have already been extended as well. Plates ending in 7 have their registrations valid until October 31, while those ending in 8 or 9 may be renewed without penalties until October 31 and November 30, respectively. The official announcements are embedded in the linked stories for reference.” 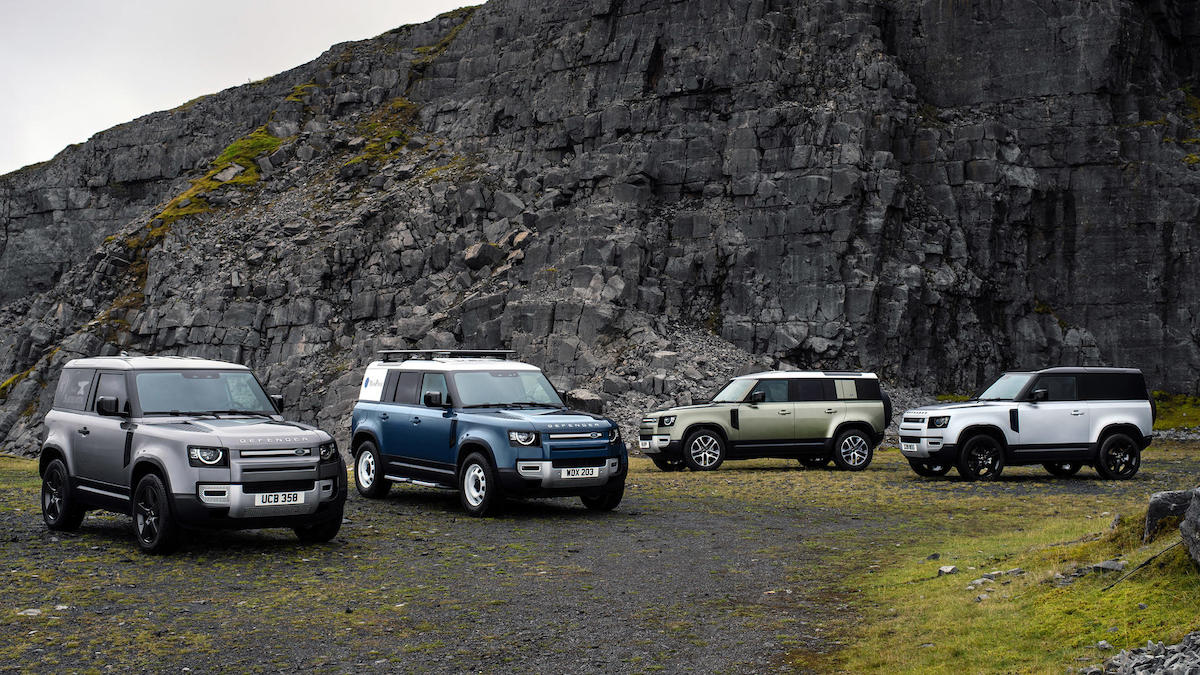 Land Rover’s 2023 Defender, Discovery range is further messing up our concept of time
View other articles about:
Read the Story →
This article originally appeared on Topgear.com. Minor edits have been made by the TopGear.com.ph editors.
Share:
Retake this Poll
Quiz Results
Share:
Take this Quiz Again
TGP Rating:
/20